Shakhriyar Mamedyarov beat Levon Aronian in Round 6 of the Superbet Chess Classic in a game where Levon had just 7 minutes less than he started with but a dead lost position by move 22. That saw Shakh move to +2, where he was joined by Alexander Grischuk, who was also winning right out of the opening against Romanian no. 1 Constantin Lupulescu. Wesley So won a pawn against Anish Giri but couldn’t keep pace with his co-leaders, MVL and Caruana traded blunders in what Fabi called “a ridiculous game”, while Teimour Radjabov had a 6th contentless draw, this time against Bogdan-Daniel Deac. 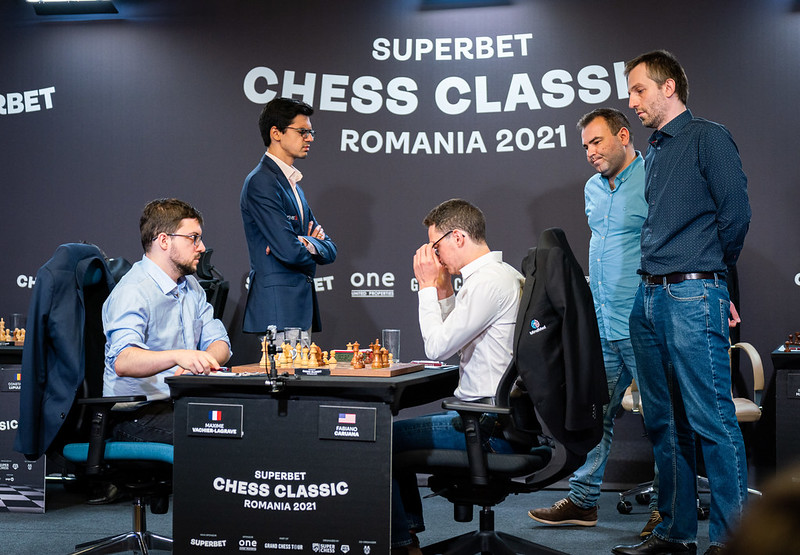 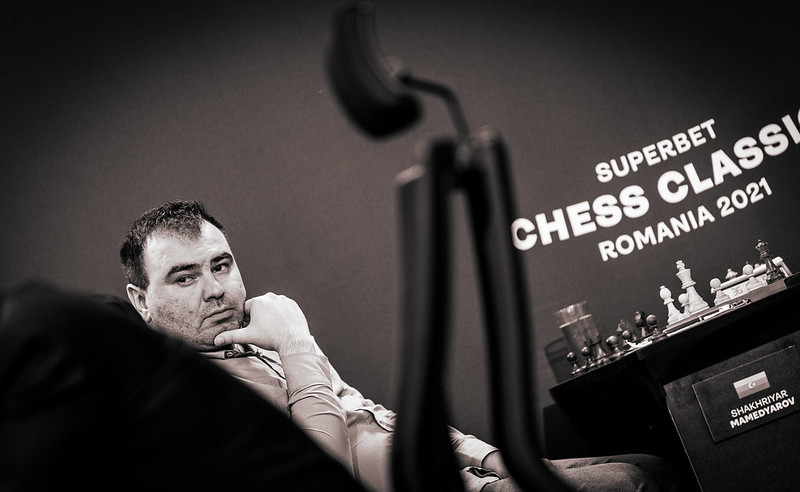 Things are suddenly all going right for Shakhriyar Mamedyarov, who's back up to world no. 6 on the live ratings | photo: Lennart Ootes, official website

Although the players themselves have always treated each other with respect, geo-political tensions mean there’s more pressure than usual for this clash between the Armenian and Azerbaijan number ones. It’s tempting to use that to explain what happened in this strange game, where Levon blitzed out his first 17 moves. Shakh’s 18.Rfe1 was a novelty, compared to the 18.Qf2 Dmitry Andreikin had used to beat Magnus Carlsen in the 2019 World Blitz Championship.

Shakh mentioned that previous game, and also felt that Levon had somewhat underestimated his new move, assuming that anything draws. Instead after 18…Rxe1+ 19.Rxe1 Bd7? 20.Qb3! Black was already close to lost.

The alternative explanation is that Levon had missed the simple but devastating tactic after 21…Qd4+ 22.Kh1 Re8?

Shakh took a while to ponder what had happened… 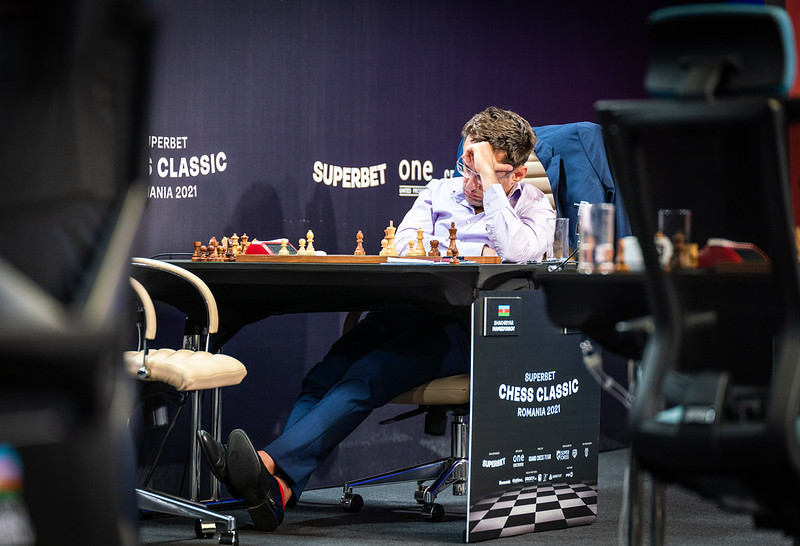 Levon staggered on to move 40, but it was utterly hopeless, and perhaps more about going through the stages of grief.

Alexander Grischuk joined Shakhriyar Mamedyarov in the lead with a fine opening idea and a relatively smooth conversion, though he didn’t exactly see it that way, feeling his level of play promises nothing!

The opening idea was 16.b3! in a Sicilian, which Alexander had been able to prepare due to Constantin Lupulescu’s somewhat limited opening repertoire and what Grischuk called, “a bit dubious openings against 1.e4”. After 16…h5 17.h4 a critical position was reached.

Grischuk explained the computer recommends in 2nd place the humanly understandable 17…Ke7, but its 1st choice is the more purely silicon 17…Ra7! Instead Constantin opted for 17…Bb5?, which Alexander knew was bad. He still had to figure out why at the board, but he managed, finding 18.Qe1!, which holds everything together and threatens Rd5. 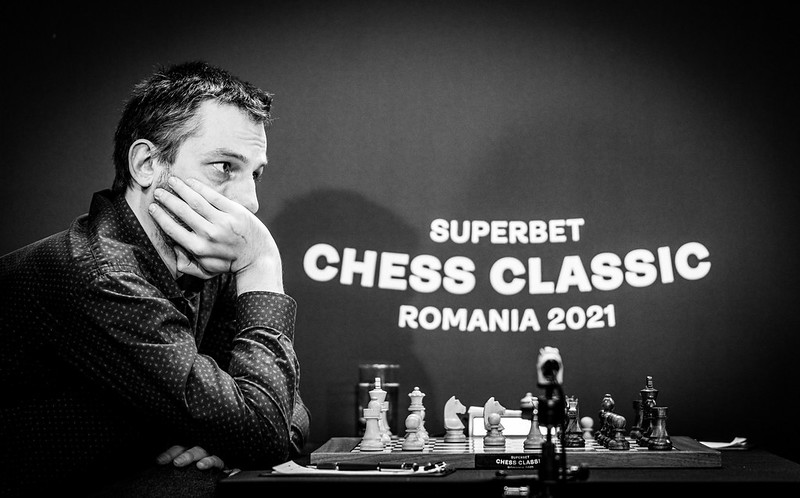 Grischuk is no. 5 on the live rating list - can he score a rare tournament victory? | photo: Lennart Ootes, official website

It was understandable that Grischuk was disappointed that he now lost some control and allowed a black pawn to get to a2, but he always retained an advantage and was able to pounce after 30…Rg4?

31.c5! blew open Black’s position, with the attempt to hold things together with 31…Rc8 running into 32.Rc3! Thunderstorms over Bucharest that temporarily stopped the live broadcast were able to put up more resistance than Lupulescu, with the game over in just five more moves. 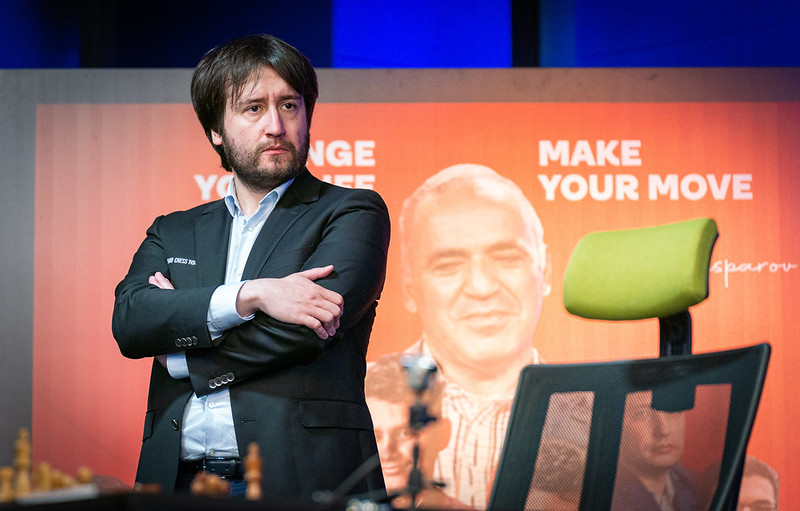 Teimour Radjabov is still only a point off the lead and will face the struggling Constantin Lupulescu in the penultimate round | photo: Lennart Ootes, official website

In the recently published Fighting Chess Index by Australian Grandmaster David Smerdon, Teimour Radjabov ranks 50th out of the Top 50 players (Vladimir Kramnik is top). After five lifeless draws and a rest day you might have expected Teimour to come out all-guns blazing against the lowest-rated player in the field, Bogdan-Daniel Deac, but no… he played the Berlin Endgame and almost 20 moves of theory. Nothing dramatic happened in the subsequent moves.

The remaining two games were hard-fought, however. This is the position after Anish Giri played 36…Nd6. 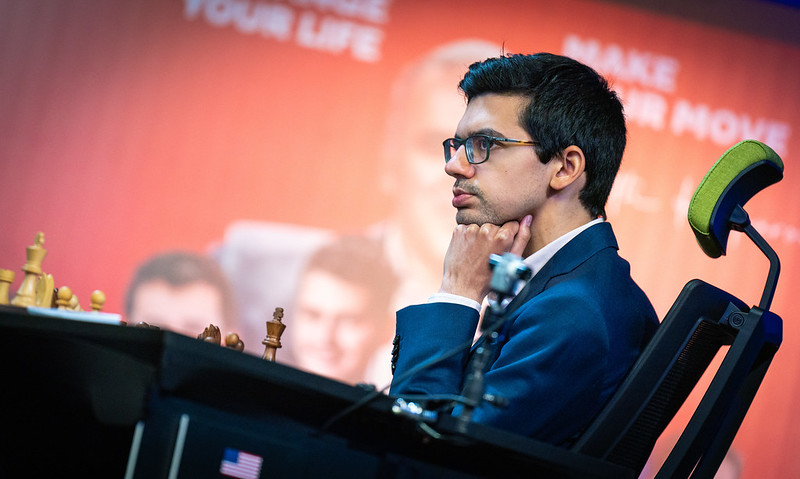 Giri was made to fight for a half point by So | photo: Lennart Ootes, official website

MVL-Caruana, meanwhile, was a short but entertaining clash that showed what can go wrong when you battle in razor-sharp opening theory. 19.Rg5?! was not the move.

The players confirmed that theory after the game, though the curiosity was that Maxime didn’t realise he’d blundered, which may have helped him retain his faith in his position. 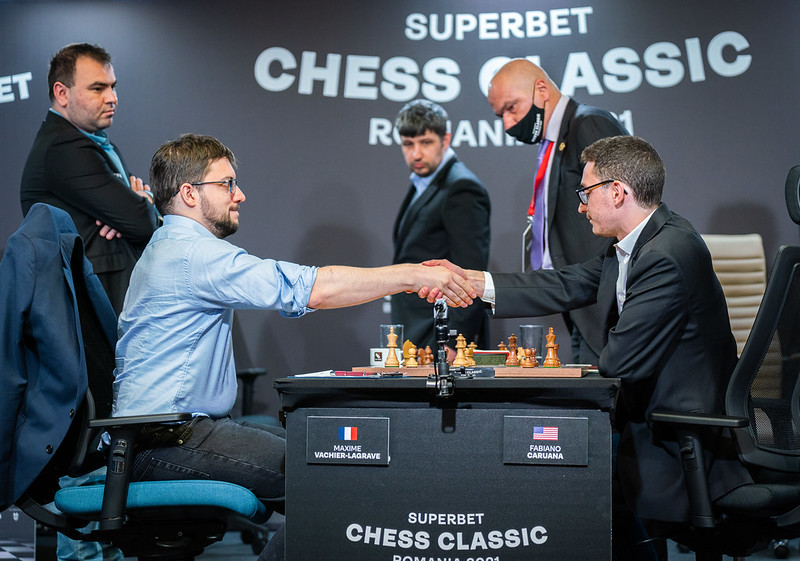 "This was just a ridiculous game - what can I say about it?" said Fabi afterwards | photo: Lennart Ootes, official website

He explained he’d thought 18.Rg5 doesn’t work due to 18…Re5?, but in fact 19.f4! wins there for White. Instead after 18.f4 Nxf4 19.Rg5 f5! White’s position was described as “borderline losing” by Fabi, who had correctly guessed he was dealing with “human error” rather than preparation.

Fabiano said he considered but underestimated his one winning move, 22…Qf6!, when 23.Nd2 can be met by the powerful 23…Nd5! and Black’s threats of checks on f2 or f1 as well as pushing the e-pawn win the day.

25…Re1+? 26.Kf2 gives Black less than nothing, while after 25…Qxc6 26.Be5 Fabiano admitted he was somewhat lucky to have 26…Qh6!, when after 27.Bf4 the players soon ended their adventures in a draw by repetition.

That means that Grischuk and Mamedyarov lead So by half a point with three rounds to go, while the all-star cast of Caruana, Radjabov, Giri, MVL and Aronian has a lot of work to do if they’re going to get involved in the fight for 1st place.

In Saturday’s Round 7 Caruana-Mamedyarov is a chance for Fabi to catch one of the leaders, while Aronian-Grischuk is Levon’s chance for redemption. If Radjabov-So is Teimour’s first entertaining game of the tournament it will be some kind of cosmic irony!