Fabiano Caruana bounced back from losing to Maxime Vachier-Lagrave to beat Shakhriyar Mamedyarov in Round 5 of the Superbet Chess Classic and go into the rest day on 50%. The other games were drawn, so that Wesley So continues to be the sole leader on +2. Richard Rapport’s 1.e4 e5 2.Ne2!? failed to unsettle Leinier Dominguez, while the most exciting game of the day was Deac-Firouzja, where Alireza pounced on a time-trouble blunder by his opponent but was unable to convert an extra piece into a win. 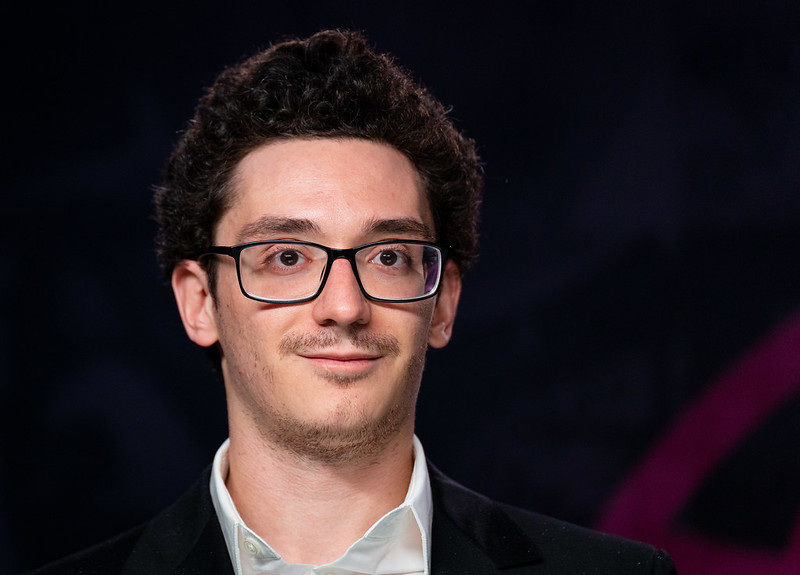 Fabiano Caruana struck back right away to go into the rest day on 50% | photo: Lennart Ootes, Grand Chess Tour

You can replay all the games from the Superbet Chess Classic in Bucharest using the selector below.

Fabiano Caruana felt he had to win in Round 5 after his loss to Maxime Vachier-Lagrave the day before, of which he said:

Yesterday was quite a bad game. It wasn’t really that I was calculating badly, but I just made a very inexplicable decision. 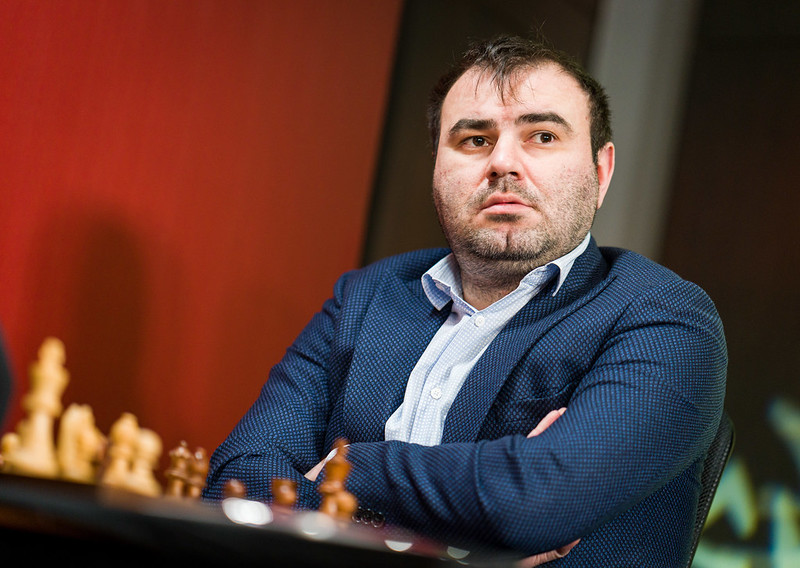 Fabiano’s exchange sac at least would have been reasonable if not for the Bd1 move he said he’d missed, while Shakhriyar Mamedyarov made a harder to explain decision in a game that initially followed a line of the Petroff played in Nepomniachtchi-Wang Hao from the 2020-1 Candidates Tournament.

And then at this moment, after Rf1, he totally shocked me. I was expecting Qf5, Qe6, Ne4, Re4, any move, except for Na6… His king is rather vulnerable and he’s taking away one of the defenders, so obviously it can’t be very good.

22.Be5! tied down the queen to the defence of the knight, with Fabiano pointing out that 22…Nc4, that he thought might have been Mamedyarov’s idea, runs into 23.f4! 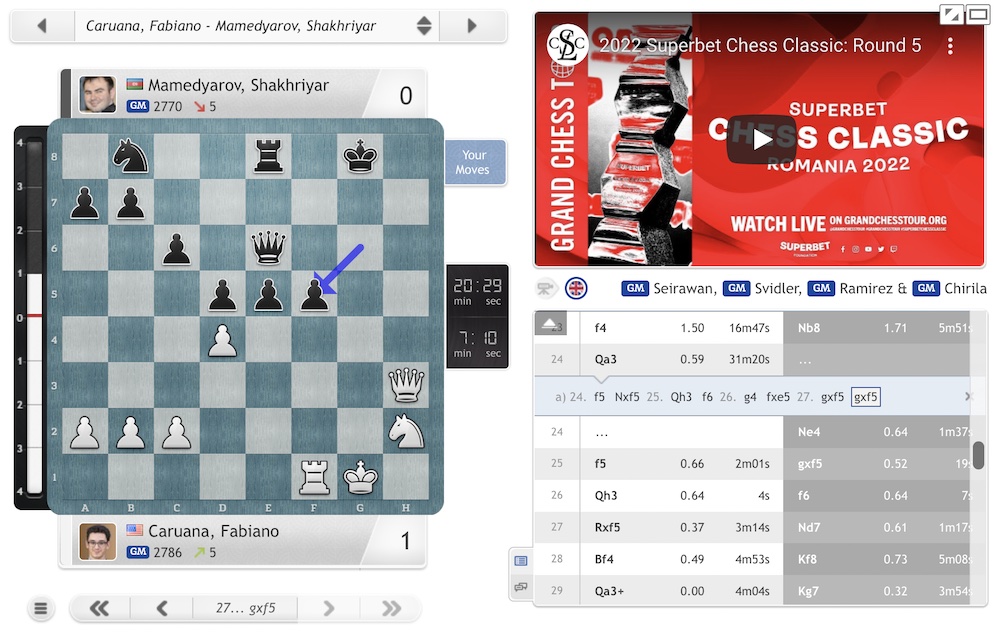 He initially thought 28.Rxf5 was winning on the spot, but then saw 28…Qg6!. He also contemplated 28.Kh1!, which is the computer’s choice, though there would still be a long way to go in the game.

Instead 24.Qa3!? was slower, and in the struggle that followed the evaluation was always swinging between a big, probably winning edge for White, and equality. Fabi pointed to 43…Ng5?! as a mistake, but the last error seems to have come on move 49.

I didn’t consider this. A great chance to hold! I have to find this Qe6 move, which is not entirely easy, and then the game goes on.

Instead 2021 Superbet Champion Mamedyarov, who has now lost two games this year, went for 49…Qxc2?!, and after 50.Nxc6+ Kc8 51.Ne7+ Fabi repeated once before picking up the d5-pawn and going on to wrap up victory smoothly. 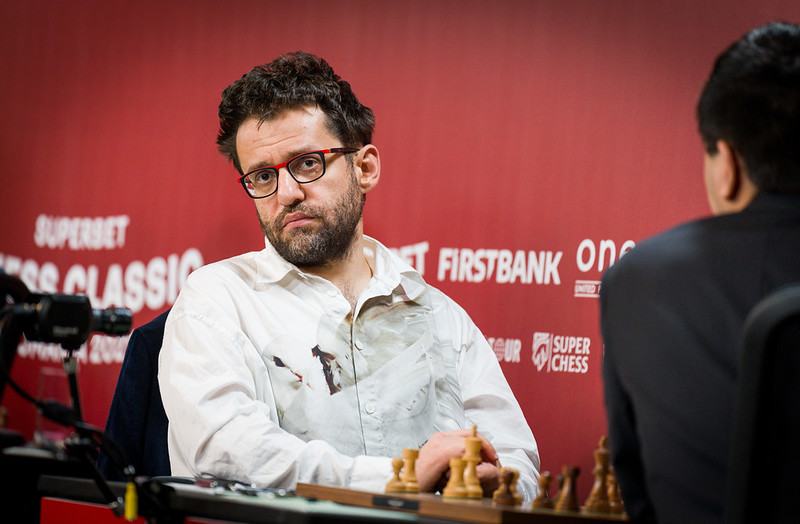 The remaining games were all drawn, with two of them having little to write home about. Wesley So withstood some slight pressure in an English Opening against Levon Aronian, while Ian Nepomniachtchi sprung a surprise with 5.Bb5 (not the common 3.Bb5) against the Sicilian. Maxime Vachier-Lagrave eventually took over with a well-timed offer of a queen exchange, before the game ended in a 42-move draw by repetition.

In fact at the end Black could have continued, e.g. 43.Kh2 Re1!, since the exchange of rooks loses, but if Nepomniachtchi had played carefully it’s unlikely the outcome of the game would have been different. 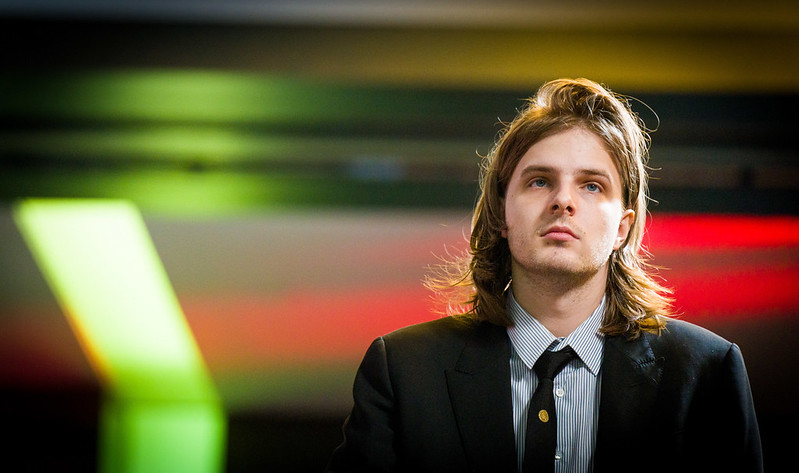 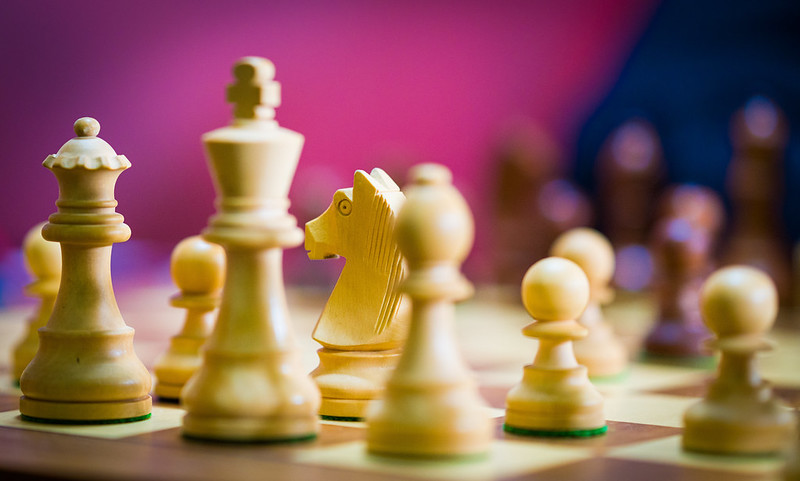 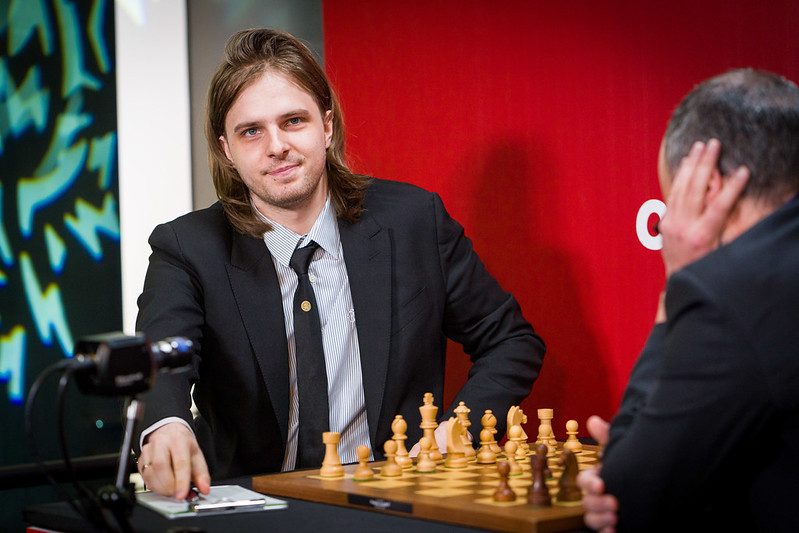 Why had he gone for the 12th most popular move?

There are so many options in this position, so I don’t see a reason why Ne2 cannot be another one. Of course White is not aiming to get any advantage or anything, but it hasn’t been played too much, and it’s move 2, so I was pretty happy to play this move.

Richard managed to make Leinier think 40 minutes over his first 8 moves, but other than that it wasn’t a runaway success.

Basically we went for this Petroff line where I guess if my knight was on f3 White would be better, but on e2 it should be harmless.

Richard did ultimately get a small advantage, but as he summed up, “I’m always very close, but never in time”. 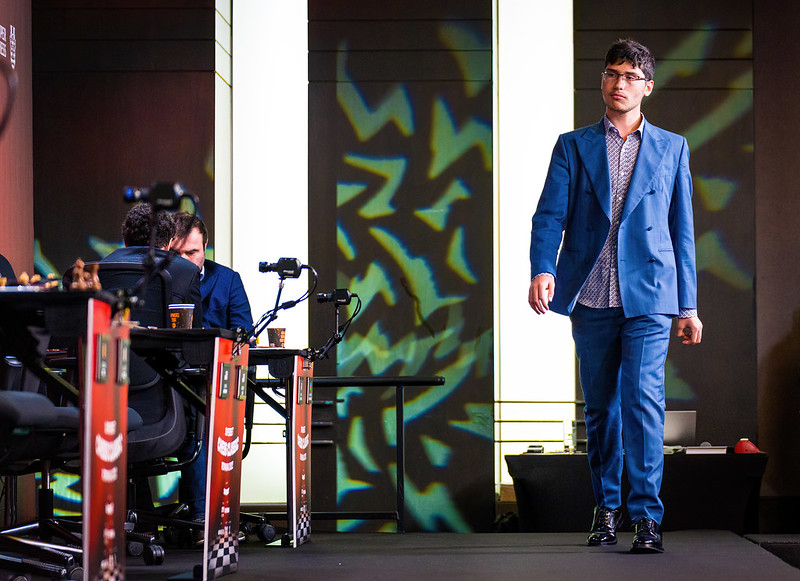 The most exciting game of the day was the one you could have predicted before the round began. Alireza Firouzja is yet to win a game in Bucharest, and his choice of the King’s Indian against the still-undefeated Bogdan-Daniel Deac made his intentions clear. Deac also wasn’t backing down!

The complex position led to mutual time trouble, with Firouzja spotting he could grab that ambitious pawn with 22…Nxh6! while Bogdan was down to his last minute. 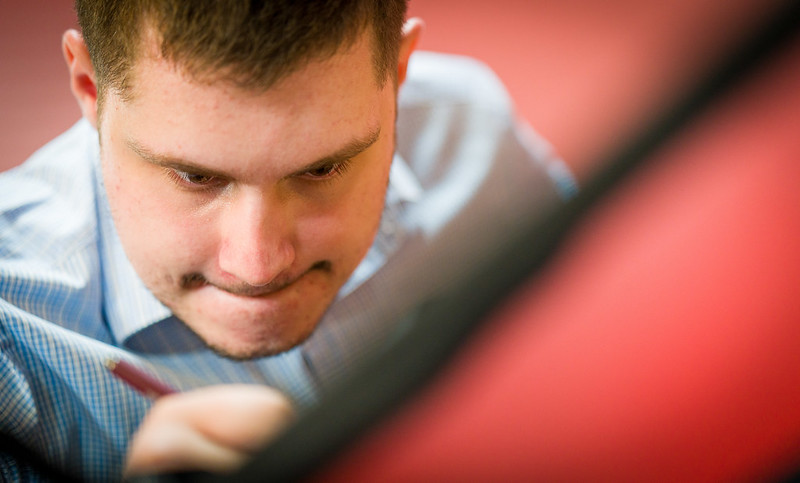 26…Ra6 was simply winning the knight, which gave its life for the pawn on e7, and Black was a piece up. There was still a long way to go to the time control, however, with Firouzja also down to his last seconds when he missed the clearest path to a win. 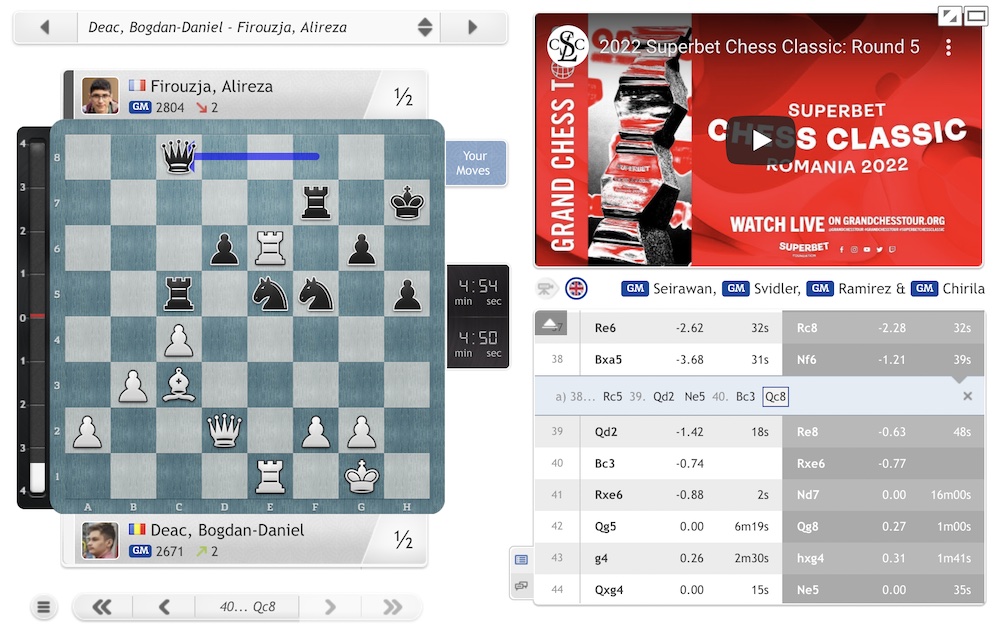 That was tough to find with no time, however, and following 38…Nf6 Black’s advantage fizzled away, until after 43.g4! Deac was even better.

He perhaps didn’t quite believe it himself, since after 43…hxg4 he played the solid 44.Qxg4. In fact he had the shot 44.Rxd6!, since taking the rook would lead to a sudden checkmate.

Alireza still harboured some hopes of organising an attack on the white king, but not after he stumbled into a forced queen exchange. “I’m very lucky this endgame is not losing — I think it could easily be losing,” he said, but in the end Deac’s three connected queenside passed pawns were neutralised and the game liquidated into a draw.

So it’s been a frustrating tournament so far for Alireza, but this isn’t the one that matters. As he put it:


I didn’t play for five months. I’m trying to get in shape, and trying to prepare best for the Candidates. 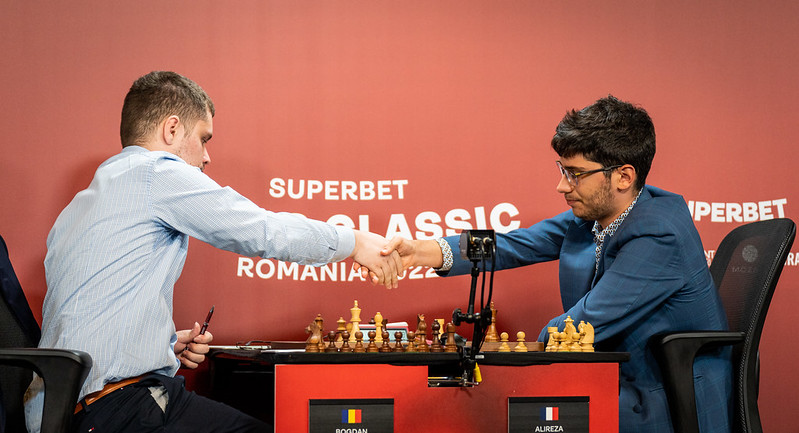 The standings looks as follows, with Wesley So still out in front and all four players qualified for the Candidates dropping rating points.

After Tuesday’s rest day the pairings for Round 6 on Wednesday all look enticing: Mamedyarov-Firouzja, Dominguez-Deac, So-Rapport, MVL-Aronian and a clash of the challengers for the last two World Championship matches, Caruana-Nepomniachtchi.