The Stockfish and Komodo chess engines have taken an early lead on 3.5/4 as the 10th season of TCEC, the unofficial World Computer Chess Championship, kicks off. It sees 24 of the world’s top chess engines play weeks of round-the-clock classical games both to determine this year’s champion and to showcase the play of our new computer overlords. You can watch non-stop here on chess24 and will probably be surprised at how the games are not only of extremely high quality but also great fun to watch. 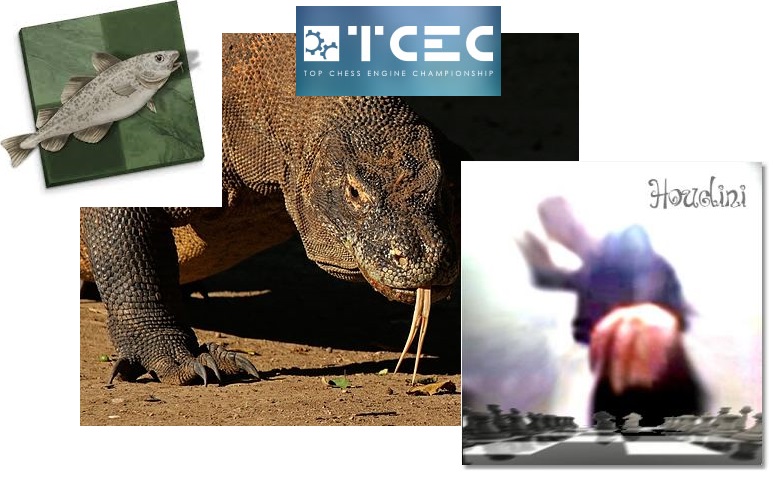 Stockfish, Komodo and Houdini are among the well-known favourites | photo (of Komodo): Charles Sharp, Wikipedia

TCEC originally meant Thoresen Chess Engines Competition since it was run by Norway’s Martin Thoresen, but for the last four seasons it’s been taken over by Chessdom and rechristened the Top Chess Engine Championship. The reigning champion is Stockfish, which defeated Houdini 54.5:44.5 in the 100-game final match last year.

At the moment this year we’re in Stage 1, where 24 chess engines are playing a 23-round single round-robin. All games are broadcast on the official website and you can follow and play through them all on chess24 using the selector below (click on a result to open a game with computer analysis or hover over an engine's name to see all its results so far):

The chess engines all use the same hardware, with 22 cores at their disposal in the first stage and no less than 44 afterwards. They don’t think while it’s their opponent’s turn to move. The time control at this stage is 60 minutes for all moves, with a 10-second increment from move 1 and only one game live at any moment in time. When that game ends the next starts immediately, and so on round the clock until the stage is over.

We're broadcasting with the normal chess24 interface, but note: 1) if you toggle to see the notation view instead of chat you see the engines' evaluations after each move (and adjudications at the end of a game), 2) the live game will always be at the top - when it's over a new game starts there, but the finished game will be saved at the end of the game list below

A computer event of course has some special rules. As well as the normal ways a game can be drawn (3-fold repetition or the 50-move rule) after move 40 the game will be adjudicated as drawn if the engine evaluation of both engines stays within a +0.05 to -0.05 range for 5 moves by both players (10 plies), unless a pawn move or capture takes place. The position will also be adjudicated as won if both engines have an evaluation of +6.5 (or -6.5) for 4 moves. 5-piece tablebase positions are also adjudicated automatically.

To level the playing field the engines are not allowed to use their own opening books and for the first stage the first two moves for each player come from a set of possible openings chosen to be fair and interesting to watch. Nelson Hernandez explains how that works:

The openings are sometimes fairly whacky, with the 1.b4 Polish (or Sokolsky, or Orangutan!) Opening followed by 1…d5 2.Bb2 Qd6 encouraging Texel and Gull to score a draw by repetition in 9 moves!

Has AI finally conquered the last frontier – the grandmasterly draw?

Another quirk of computer chess is that the first tiebreak in case the top 8 isn’t clear when the stage ends is crashes, with engines punished for having crashed during the stage. That may be relevant, since we’ve already seen Arasan disconnect in a slightly better position and Fizbo’s connection “stall” when it was just a couple of moves from being adjudicated a win in an overwhelming position against Booot:

Black's loss here was the computer equivalent of forfeiting as your mobile phone rang...

Fizbo’s Jekyll and Hyde tournament has also seen it draw with White against favourites Komodo and Houdini. One bug-fix intervention is allowed during a stage, but otherwise engines can’t be updated except between stages. 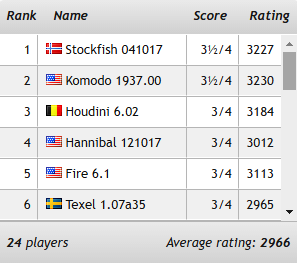 It’s far too early to draw conclusions, but it may be ominous that Stockfish and Komodo, between them the winners of the last six seasons, took an early lead with 3.5/4 (note the decent average rating... a 24-player Category 29 tournament?).

What of the chess, though? Well, though one game was drawn in 157 moves! (after reaching a tablebase position where an extra bishop was no help to White) we haven’t seen much of the stodgy, planless chess some might remember from the early days of chess computers. 50% or more games have been decisive in each round, and some of the play has been beautiful!

Here Stockfish is facing Ginkgo, which has just played 18…Qc7:

Funnily enough, after temporarily sacrificing a rook and a queen White isn’t material up, but Stockfish played the ice-cool 25.Kd2, safe in the knowledge it has a winning advantage. Computers don’t often spoil brilliancies and the whole game is worth replaying.


It’s also been notable that computers tend to share the current human World Champion’s scepticism over fortresses. Vajolet’s setup had already broken up when Jonny found a beautiful break:

Of course 72…a4 is met by 73.Rxa4! and the rook can’t be taken without allowing mate-in-4. A wonderful example of tying an opponent up on one side of the board before winning on the other.

Jonny has been on the receiving end as well, though, with 30.b4!! allowing Chiron to break through almost as impressively:

The problem with writing about computer chess is the lack of photos of our heroes! | image: Chiron Chess

There are plenty more games we could mention. For instance, Chiron won another demonstration of strength against Nirvana (check out the power of the pawn pushes on the kingside) and Komodo won a Carlsenesque endgame where it just saw that much further in a seemingly equal position, but you get the idea. There’s a lot of interesting chess to play through, even if you may miss the psychological aspect of fallible humans competing at the board!

You can follow the games live here on chess24 (switch from chat to notation view to see the players’ own evaluations after each move), on the official website or also in our free mobile apps: