Alireza Firouzja won a lost position to beat Wesley So in Round 8 of the Sinquefield Cup, putting him on the verge of a $100,000 bonus for winning the Grand Chess Tour. Firouzja is level with Ian Nepomniachtchi, who beat Levon Aronian, and Fabiano Caruana, who ended his Sinquefield Cup by knocking Hans Niemann out of the 2700 club. 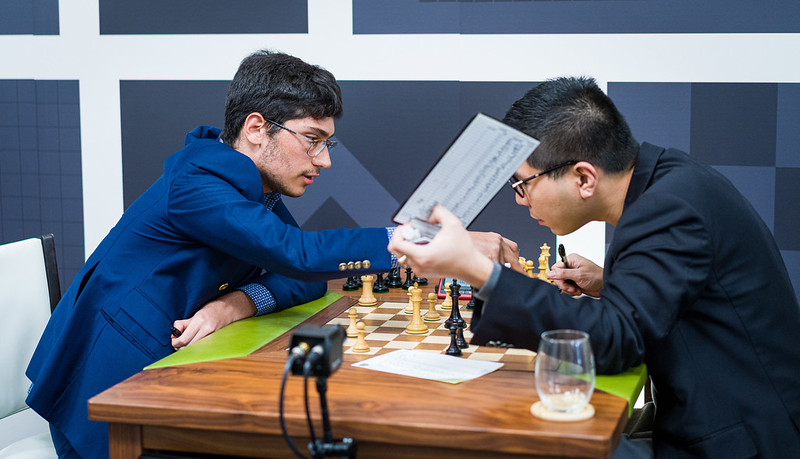 Firouzja wins another game he was losing, this time against So | photo: Lennart Ootes, Grand Chess Tour

After four draws in Round 7 of the Sinquefield Cup we almost got four wins in Round 8, with Fabiano Caruana describing it as “one of the bloodiest rounds in a top tournament I’ve ever seen”. 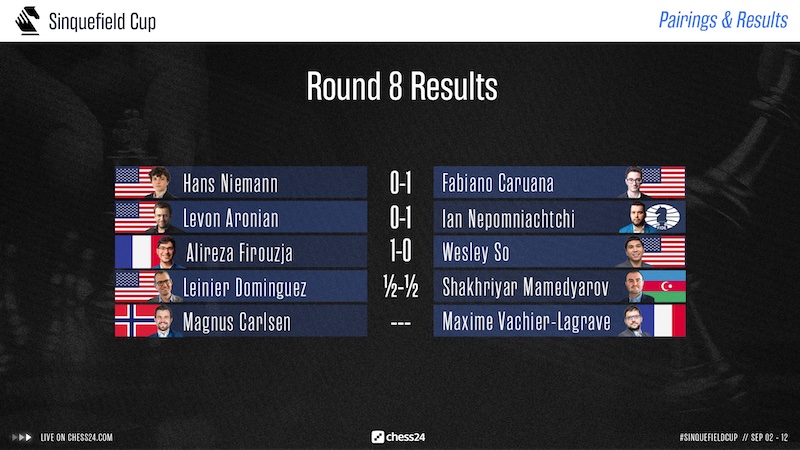 The game with most at stake by far was Firouzja-So, since Wesley So was leading the Sinquefield Cup by half a point and knew that if he could maintain his advantage over Alireza Firouzja he’d also take home the $100,000 bonus for winning the Grand Chess Tour as a whole.

The game saw an Italian Opening, with Rustam Kasimdzhanov, one of the world’s very best chess coaches, confessing that he finds the intricacies of the opening impossible to fathom.

Alireza Firouzja also struggled, admitting he’d been surprised by 9…a5 and then “completely underestimated” 14…Nh5.

I felt kind of stupid, because it’s kind of the only move. If he goes back I’m better, and he cannot defend the pawn in a proper way, so I should have calculated this when I played this Bb2, Bb5. I underestimated the move and I think I could hold here with precise play, but it’s very difficult.

Wesley soon took over completely and looked as though he’d all but clinch both victory in the Sinquefield Cup ($100,000) and the Grand Chess Tour (another $100,000). His problem, however, was an abundance of options, and he began to go astray. 17…Bxh3!? was strong, for instance, but not as strong as 17…Rad8! first.

Wesley kept missing that intermediate move, and a few moves later his advantage had gone. 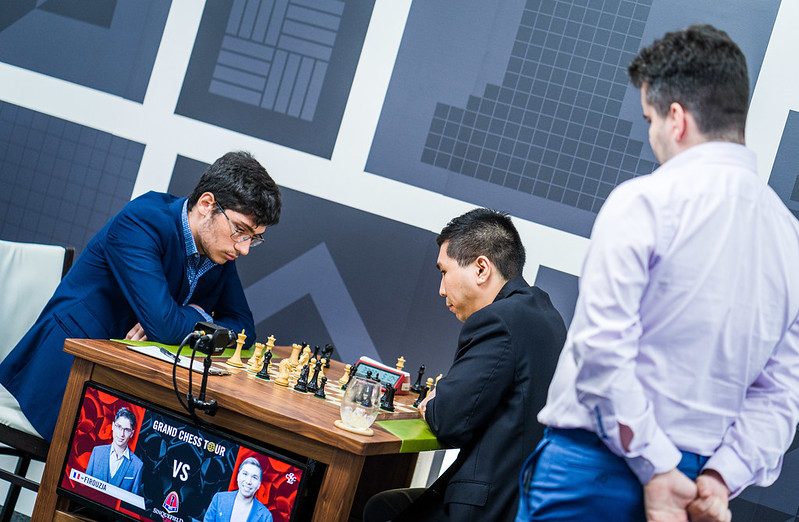 The same thing had happened to Shakhriyar Mamedyarov against Firouzja, and the Azerbaijan player had then collapsed. Now history repeated itself, with 23…Rab8!? allowing 24.e5!

Here Wesley spent under five minutes on what was the last critical moment of the game. 24…Rxb3! was both what Alireza expected and an only move, with White better, but Black ultimately getting four pawns for a piece.

Instead 24…g6? condemned Wesley to defeat, with Alireza saying he saw the winning 25.Ba3! almost immediately. The point is that 25…Qb6 (and there’s nothing better) could be met by 26.e6!, demolishing Black’s position. The game didn’t last long.

His biggest rival for the Sinquefield Cup is Ian Nepomniachtchi, who said of his win over Levon Aronian, “it was some sort of madness, very shameful!”

The game came after five draws for Nepo, which he described as “five consecutive rest days”. He welcomed Levon going for a sharp response to the Petroff, and it wasn’t long before Ian was completely on top.

Levon’s 13.Qb3 had attacked the b7-pawn and threatened to win a pawn with multiple captures on e4, but in fact 13…Rf7! defended everything (14.Qxb7? Bxh2+ would win the queen). 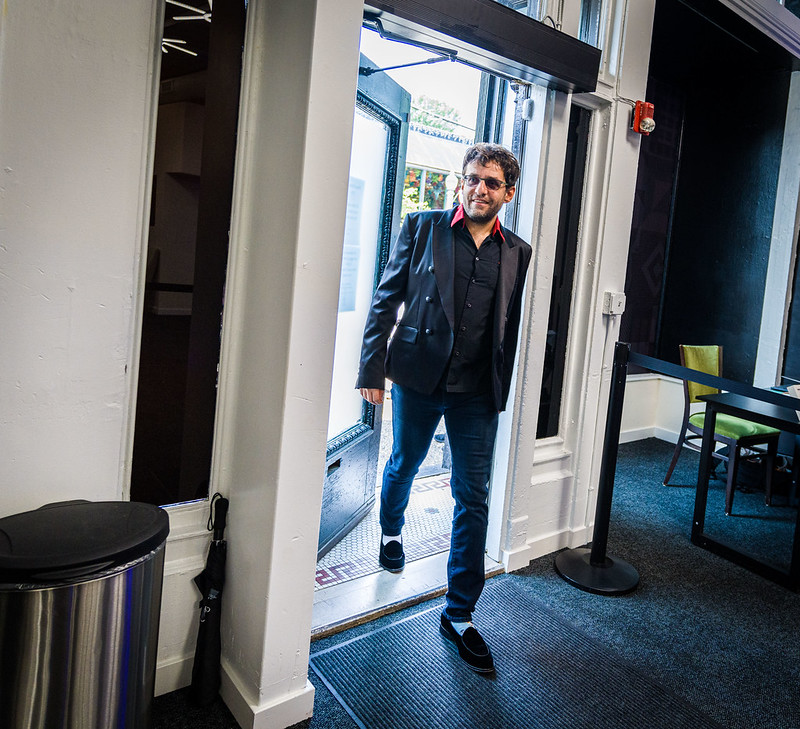 Up to a point Nepo followed up perfectly, but just when he was waiting for Levon to resign Ian went astray and allowed his opponent real counterplay. It was roughly equal, and Levon could have made his life much easier on move 33.

Instead another mistake at move 40 saw Nepo take over again, and this time he didn’t release his grip as his queen slalomed towards the white king to deliver the final blow.

Firouzja and Nepomniachtchi are joined in the lead by Fabiano Caruana, though the essential proviso to add is that Fabiano has played all of his games — he was set to play Magnus Carlsen in the final round — so needs both Firouzja and Nepo to lose to have any chance of winning the tournament. 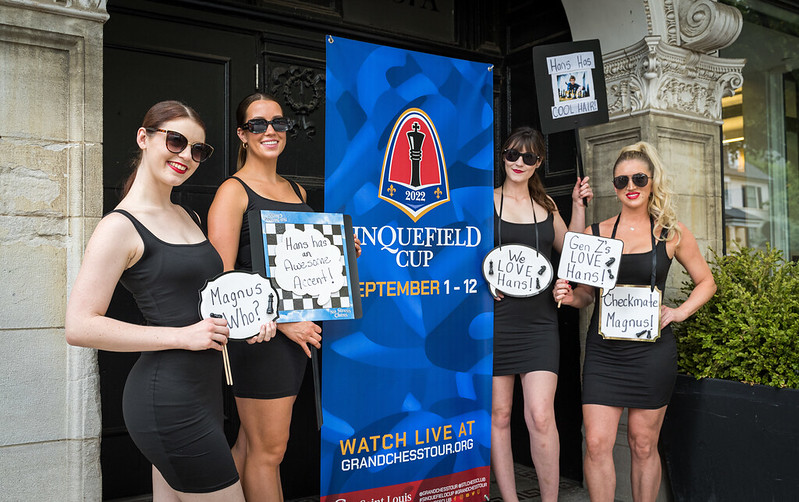 Hans Niemann had a support group in St. Louis, but things didn't go his way over the board | photo: Lennart Ootes, Grand Chess Tour

Fabiano won against Hans Niemann, who was thus knocked out of the 2700 club. Things had been going relatively well for Hans until he went for the bold 21.g4!?, attacking but also opening up his own king.

He’s an interesting player, because he makes extremely responsible decisions very quickly and, I had a feeling, based purely on intuition. His decision to play g4 was a surprise. He played it within two minutes. I was very surprised. I basically stepped away from the board thinking, okay, it’s a complicated position and now he’s going to take a long time, and then g4 gets blitzed out. I was a bit scared by this move, but on the other hand, it also felt extremely risky to me.

The exposed white king would prove a liability, with Fabi getting to play a nice tactic.

In fact when Fabi later failed to go for the sharpest line Hans was very close to a draw, but one more inaccuracy (“I was so thankful for this gift” said Fabi of 52.Bd4?! instead of 52.Bf3!) and Fabi was able to wrap up victory.

Arguably Hans got a boost during the game when a statement was released by Chief Arbiter Chris Bird noting that there was “no indication that any player has been playing unfairly”.

Of course the statement still skirts the issue of what actually happened so that after three rounds it was felt a change was required.

The one remaining game in Round 8 saw Shakhriyar Mamedyarov go for a move that shocked our commentary team, 18…h5?!

Perhaps against the odds the pawn survived until move 71, but Leinier Dominguez instead methodically rounded up the d3-pawn. He missed clear wins in the queen endgame that followed before the game was ultimately drawn in 85 moves.

That leaves the standings as follows going into the final round.

The pairings make all kinds of scenarios possible, since the leaders don't play each other and even 5th place Dominguez is in with a very small chance of tying for 1st. Only Mamedyarov-Aronian can’t influence the fight for 1st place, while all eyes will be on MVL-Firouzja, Nepomniachtchi-Niemann and So-Dominguez.