Sinquefield Cup 7: Wesley the only winner

“This tournament is broken,” said Jan Gustafsson after all four games were drawn in Round 7 of the Sinquefield Cup. It was a day of long theoretical battles that never looked likely to burst into life, though Alireza Firouzja at least showed fighting spirit by playing on — in vain — against Leinier Dominguez. Wesley So didn’t play, but maintained the sole lead with just two rounds to go. 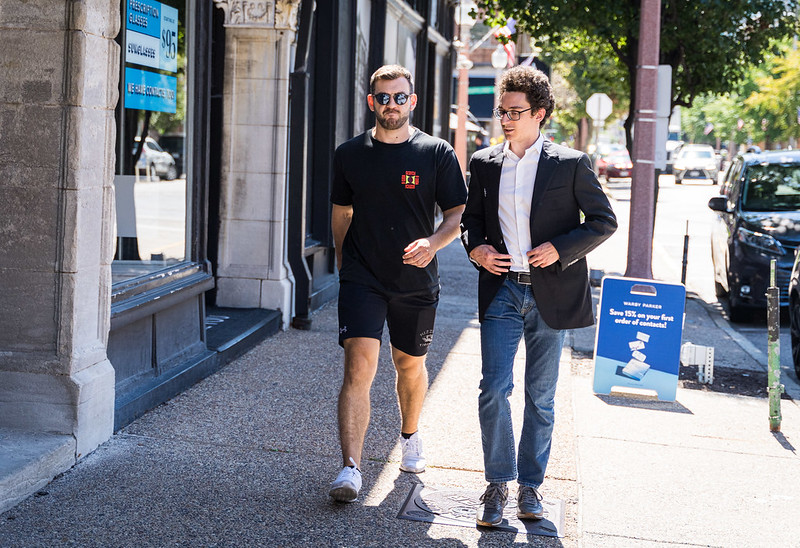 So-Carlsen was the pairing that would have garnered most interest in Round 7 of the Sinquefield Cup, but Magnus had long since left the building. Wesley had a 1-point lead and could have been caught by three players, but in the end no-one managed. 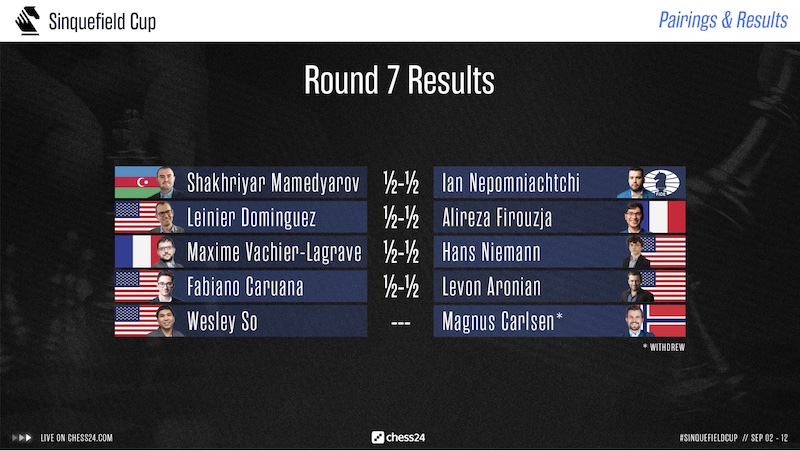 The tone was set early on in Round 7, as the players raced through their moves on most boards. 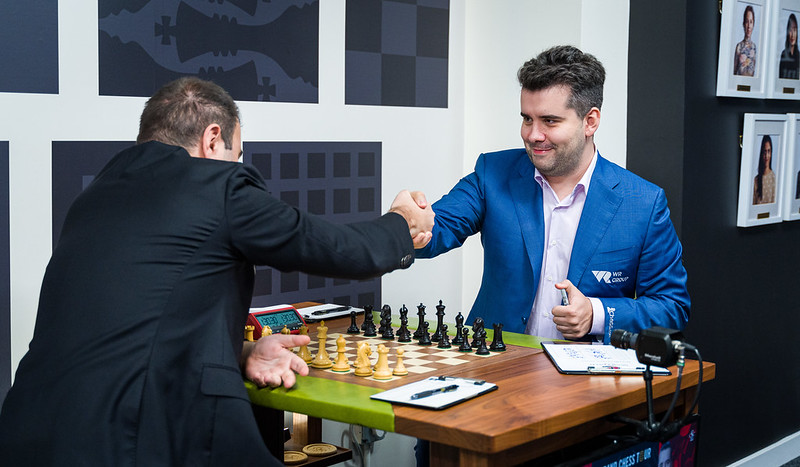 The first game to finish was Mamedyarov-Nepomniachtchi, a Nimzo-Indian where the first new move was on move 24. By the time the game was over 10 moves later we were barely an hour into the round.

Nepo didn’t sugar-coat things afterwards, commenting, “You could argue it’s my 4th game in a row with the same very boring scenario.” Ian understood that Shakh wanted to recover after losing his previous game, but called it unfortunate, since he pointed out this might be his last classical tournament before a World Championship match against Ding Liren.

The 2nd game to finish was Caruana-Aronian which featured an Anti-Berlin where the first new move was played on move 19.

The 14 minutes Levon spent on 19…Bxf2 was the only serious think either player took before move 30, with Fabi commenting:

I was hoping maybe he’d forgotten some details about this line, and it’s very tricky, but he remembered it extremely well. 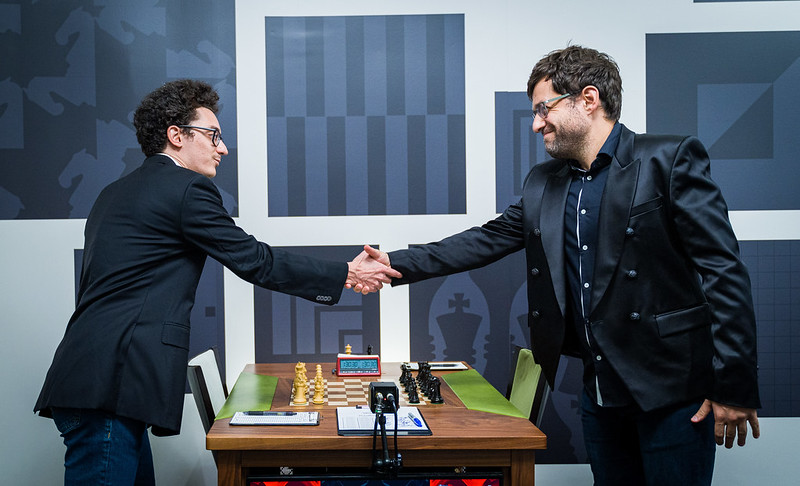 Levon described Fabi’s 30.Kd3 as careless, but the game still fizzled out into a 45-move draw. Caruana’s ex-coach Rustam Kasimdzhanov felt that Fabi wasn’t pushing to win the tournament.

He gave a surprising response to Fabi having mentioned the day before that he was distracted from chess.

Rustam: What is he distracted by?

Jan: I don’t know. Chess drama, the podcast, the tennis?

Rustam: It’s just so ridiculous, yeah? If you know Fabi even a little bit he couldn’t give a damn about Hans, or Magnus leaving the tournament, this is just absolutely ridiculous. Whatever he’s distracted by has nothing to do with this.

Jan: Give us more!

Rustam: I don’t know any details, but it’s clearly not Hans, yeah?

Jan: But seriously speaking, I’m not sure if distracted is the right word, but it must still be weighing on him what happened in the Candidates, and to a somewhat lesser extent the Olympiad.

Rustam: Maybe a little bit, but also not. He just doesn’t function like this. These things do not weigh on him. He’s like… I don’t know if you’ve seen The Great Gatsby or read the book?

Jan: I did read the book, didn’t see the movie.

Rustam: He’s basically like this Buchanan couple. He withdraws into his money, and power, and leaves the world to take care of its own problems… So whatever he’s distracted by, it’s not the Olympiad, not the Candidates, not Hans.

Jan: What could it be then?

Rustam: I have a few guesses. Nothing that could be aired without me getting in trouble!

One reason Fabiano might have already mentally checked out is that he has only one game to go, Black against Hans Niemann in Round 8, since he was due to play Magnus in the final round. 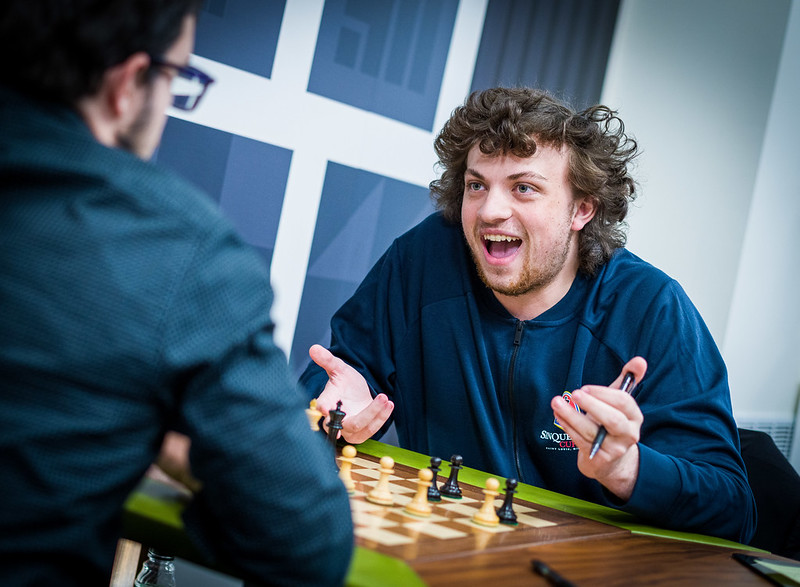 Hans Niemann had earlier played a blitz match against MVL in Paris, so felt at home with his opponent | photo: Lennart Ootes, Grand Chess Tour

The post-game interview with Hans Neimann seemed like the best bet for drama, despite MVL-Niemann finishing in a tame draw. Would Hans respond to Chess.com saying they had information “that contradicts his statements regarding the amount and seriousness of his cheating on Chess.com”?

The answer was no, though he did refer to the situation and its impact on his chess.

To play chess you need to be in such a serene state, you need to sleep well, you need to not be on social media five hours a day, you need to go to the game with a clear mind, and you need to be calm. You can’t have a million different things entering your head at once. Before this Wesley game [in Round 6] I was told I should just force a draw because playing chess in these conditions, simply no-one can do this. I didn’t do that and I paid the price.

He later added, “I can’t play chess anymore, to play chess in these conditions is absolutely ridiculous”. He also used the interview to pay tribute to his first coach John Grefe. 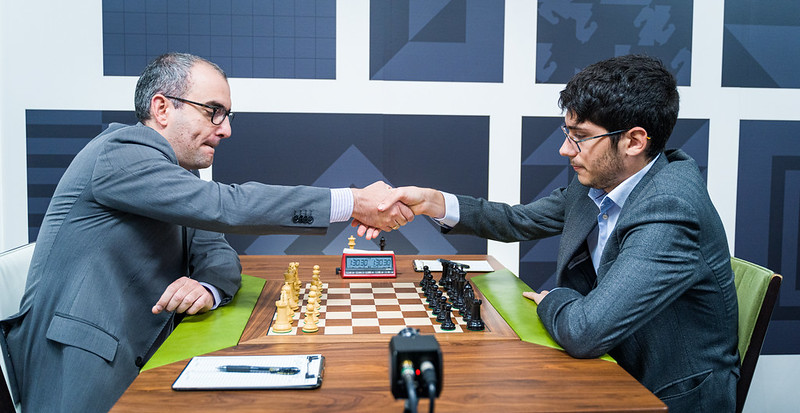 By far the longest game of the day was Dominguez-Firouzja, though it was hard to expect when another long theoretical battle saw the first new move, a deviation on Wei Yi – Lu Shanglei from the 2020 Chinese Championship, played only on move 26.

The position was roughly equal and seemed set to end in a logical draw by repetition, before Alireza decided to play on.

“If you’re 19 and super-ambitious then that’s what you do,” said Fabiano Caruana, though if anyone had an advantage our commentators felt it was Leinier Dominguez. If it was a reckless decision it wasn’t punished, however, with the game ending in a repetition on move 55, after neither player had achieved a clear advantage over the course of the game.

It was an excellent day for Wesley So, who retained the sole lead with just two rounds to go. 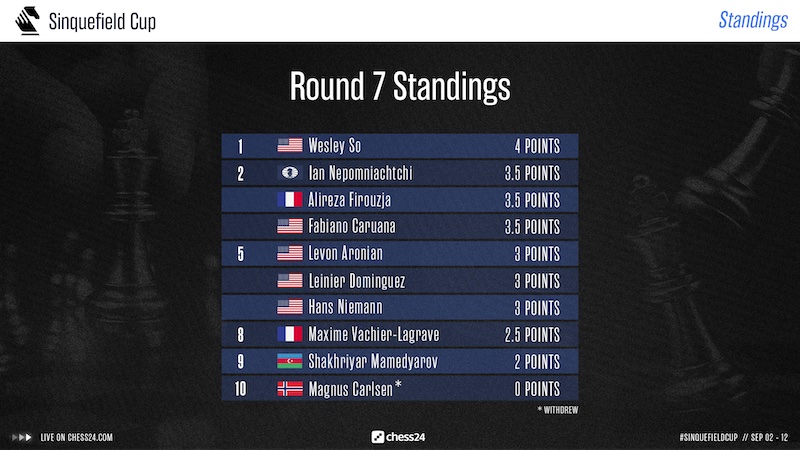 He’s on +2, while Alireza Firouzja and Ian Nepomniachtchi are on +1. Fabiano Caruana is only on 50%, with just one game left to play.

That remaining game, Niemann-Caruana, may be a highlight of Round 8, while Firouzja-So and Aronian-Nepo will be vital to the standings.