Fabiano Caruana, Ding Liren and Vishy Anand continue to lead the 2019 Sinquefield Cup after all games were drawn for a 4th time in 7 rounds. Once again it was Vishy Anand who fashioned a gilt-edged chance to beat Ding Liren only to let the win slip away. Hikaru Nakamura reflected that modern players are worse tactically than in the past and added, “If Magnus isn’t winning games then I think it’s not a good sign”. GM Denes Boros reports from St. Louis. 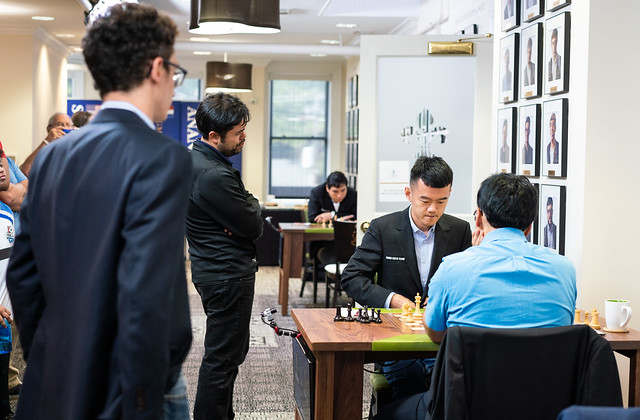 You can replay all the games from the 2019 Sinquefield Cup using the selector below:

And here’s the day’s live commentary:

There are two chess24 special offers during the event. Go to the Premium page and enter the voucher codes:

It all seemed to go well for Vishy Anand, as he was outplaying Ding Liren in a complicated Catalan position, but stubborn defense by the Chinese Super GM and some uncertain play by Anand was enough for Ding to save the game. 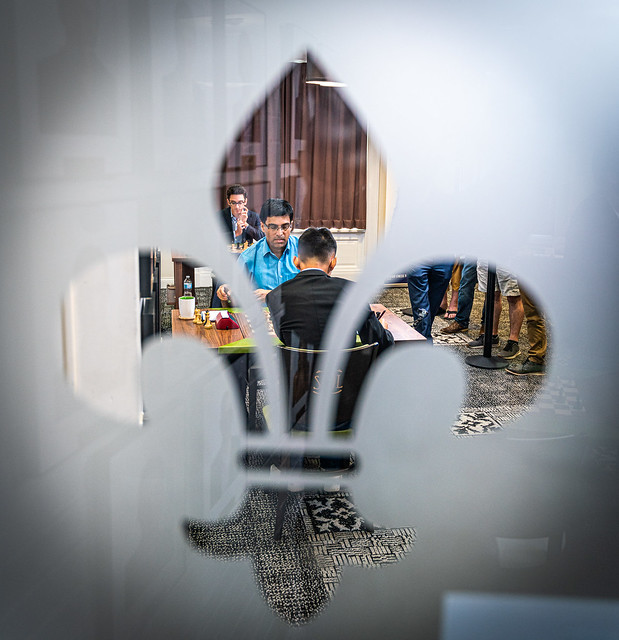 Even photographers need to find a way to liven up the action! | photo: Lennart Ootes, Grand Chess Tour

Anand could have closed out the game early on with the ambitious 21…Nc4!

After 22.Bc3 Ng4! Black’s attack is irresistible, as White is unable to stop Black from swinging the rook over from c6 to h6. Instead Vishy played 21…Rxc1, but that was far from the last chance of the game. One beautiful win was possible after 26.gxh4:

Here the trick was 26…Ne4!! 27.fxe4 (otherwise the knight gets to d2) 27...Rxe4 when the white king is in deep trouble. Vishy instead played 26...Qc6, which objectively still kept a winning position, but was a sign he couldn't find a good plan. Hikaru Nakamura would later comment on this moment:

I think it’s just the nature of chess that the game has become so positional that we’re not as good tactically as we once were. I think it’s definitely true, because the way games go, just thinking about someone like Vishy, for example, I think anyone who was around in the 90s would have expected Vishy probably to play Ne4 in like 2 minutes or something. Vishy used to be this crazy speed demon and tactical monster.

It wasn’t about Vishy in particular but chess in general, which Nakamura thinks has been transformed by computers and their ability to defend almost any position. 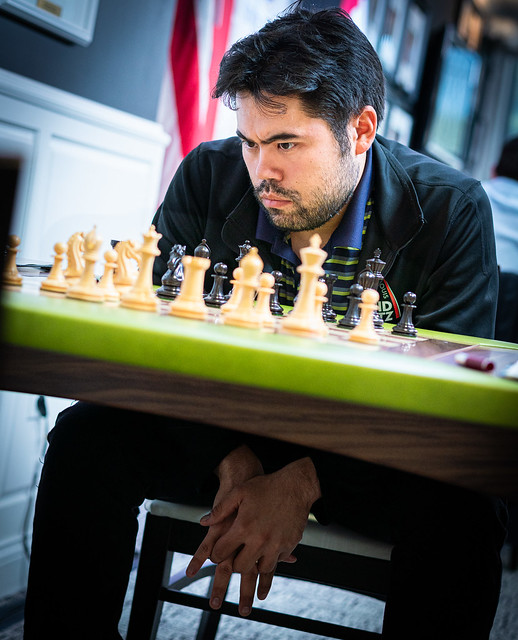 Hikaru Nakamura was a very rare case of a modern chess grandmaster claiming to be worse at something than players in the past | photo: Lennart Ootes, Grand Chess Tour

For example, I think if you could go back in time and if Garry could get tactical positions the way he did in the 80s and 90s I think he would be probably the best player in the world today, but again, getting those positions - you don’t get them so often so you’re much more used to playing positionally and because of that I think we miss tactics.

Vishy would later miss a much harder chance to win in the ending, and overall it must have been a terrible blow for Anand. He could have taken sole first place with a victory, just as he could if he’d defeated Wesley So or Anish Giri in earlier rounds.

Fabiano Caruana was always under some slight pressure against Anish Giri, but after 34…Rf4 it was clear that the game would end in a draw after some further simplifications. Anish afterwards launched a spirited attack on the idea that it matters whether a hard-fought game ends in a draw or a win:

In other news, Magnus Carlsen tried to break the spell against Ian Nepomniachtchi, but despite playing what he called “a sharp forcing line as White” against the Grünfeld, the game ended in a series of exchanges and a draw.

Nakamura commented on that 7th draw of the event for Magnus: 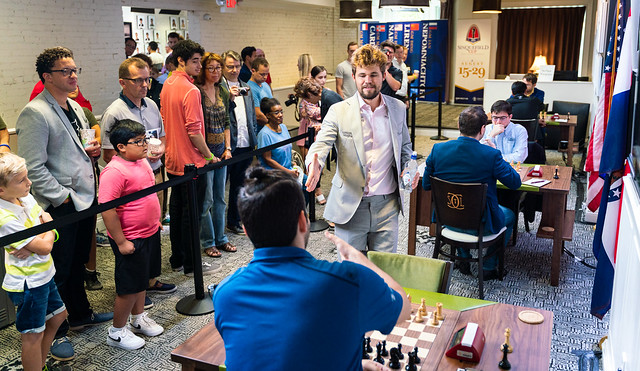 That echoes what Alexander Grischuk said eight years ago in an interview with Vlad Tkachiev after almost all the classical games ended in draws in the 2011 Candidates Tournament:

Grischuk: Imagine that in football the goal was twice as narrow. How would the majority of matches finish?

Grischuk: OK. But then imagine another player comes along who represents a mixture of Messi, Bolt and Schwarzenegger, and then he starts to regularly run rings around half the team, and then the goalkeeper, and whack! A goal! His team would, of course, start to win continually. Great! But still, does that mean the goals should be that small? And so now we’ve got Carlsen. Despite often having bad positions with either colour he still manages to post great results. But that doesn’t mean nothing needs to be changed – reduce the time, widen the damn goals!

But is the situation so dramatic, or is this just one classical event with an unusually large number of draws? Magnus, meanwhile, is definitely feeling a sense of urgency about getting back to winning ways!

I have White against Ding tomorrow so that’s a chance. I still feel like it’s partly up to me. If I get going I’ll have a good chance to win, but certainly so far I’m not.

Round 7 mostly featured slow manoeuvring games, but without any particular success, as MVL-Mamedyarov, Aronian-Nakamura and So-Karjakin ended in draws on moves 33, 40 and 42. 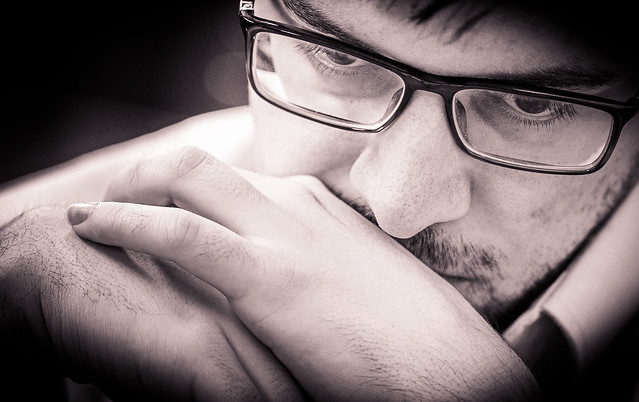 MVL is among the players who have failed to fire at this year's event, but literally everyone is still in contention for first place | photo: Lennart Ootes, Grand Chess Tour

That leaves the standings as follows, with just four rounds now to go:

The big match-ups for Round 8 will be Carlsen-Ding Liren and Caruana-Anand. Will it be the decisive round? Tune in to live commentary here on chess24 at 13:00 in St. Louis (20:00 CEST) to find out!