Magnus Carlsen has now won 5 of his last 7 classical games against Ian Nepomniachtchi as he eased to victory against his World Championship challenger in Round 1 of the Sinquefield Cup. All the other games were drawn, with Fabiano Caruana and Levon Aronian given scares by 19-year-olds Alireza Firouzja and Hans Niemann. 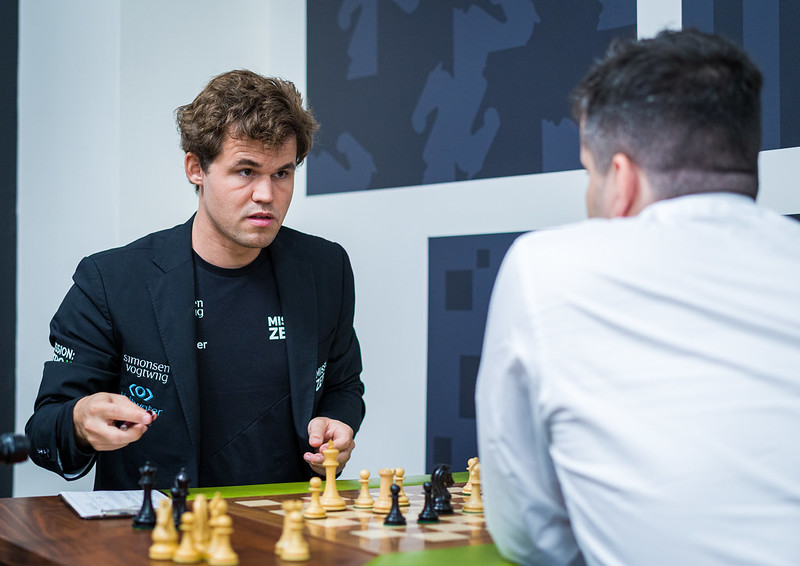 World Champion Magnus Carlsen is a wildcard for the Sinquefield Cup, the final event of the 2022 Grand Chess Tour, but he confirmed his status as favourite with the only win of Day 1 of the event. Replay all the games and check out the pairings using the selector below.

Jan Gustafsson and Rustam Kasimdzhanov commentated on all the action.

Magnus Carlsen scored 5/6 against Ian Nepomniachtchi at the end of the World Championship match in Dubai, and their first classical game since was more of the same — although Magnus pointed out he’d never had things quite so easy during the match.

I didn’t get a lot of these kinds of games there. I don’t know. He didn’t do so well in the rapid either, so probably this was just the game of somebody who’s not in great shape. He was not finding the right manoeuvres, overlooking some of my ideas. Also he was playing too fast at critical moments — he didn’t really sense them too much. I think I did well in creating a situation that was not pleasant for him, but he certainly should have done better.

The game featured an early g4 that’s been a Baadur Jobava speciality.

After 9…Be4 10.Be2 Qb6 11.Qb3 queens already disappeared from the board with 11…Qxb3. That gave Magnus doubled b-pawns, but he felt it was much more significant that he was able to inflict doubled g-pawns on Black while also gaining the advantage of the bishop pair. He summed up:

I decided to play something that’s pretty harmless, but at least you get some sort of typical position that’s generally equal if Black knows what he’s doing, but I thought it would be a decent try. I feel like it was a massive success. I eventually got this endgame, or queenless middlegame, that is not much, but it feels like a massive success already to get this.

It was a solid but imbalanced pawn structure suited to long-term plans, and one Magnus had got some practice with the day before!

Magnus said the pawn sacrifice was a move he expected 100%. He saw no ghosts and calmly took the pawn with 29.Bxa5, pointing out that the seemingly weak pawn on b2 actually covered key squares. 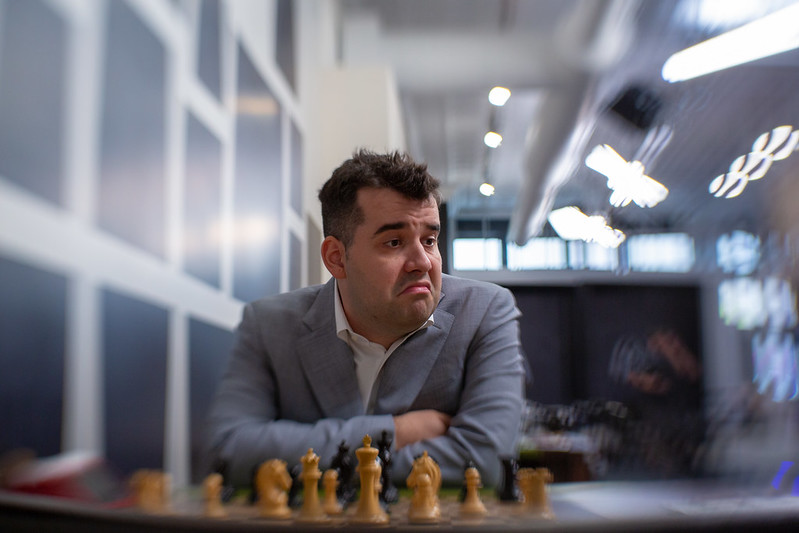 The rest was remarkably easy, with Magnus noting that 35…Kc7? was “just resigns on the spot”. He said Nepo had to go for 35…Nxd3, even if the rook ending there was “truly terrible”.

Instead, after the move in the game, Magnus could simply withdraw his bishop from the firing line, when Jan and Rustam agreed with the World Champion’s assessment.

There was no way back, and it was perhaps fitting that the game ended with the b-pawn advancing one square further to b6.

That win took Magnus up to 2865 on the live rating list, 77 points ahead of world no. 3 Nepomniachtchi. If Magnus can string together a few more wins in St. Louis his goal of 2900 might begin to look reachable again.

Four draws, though none without a fight

Elsewhere none of the games could match the headline clash of the day, though they were all intense. 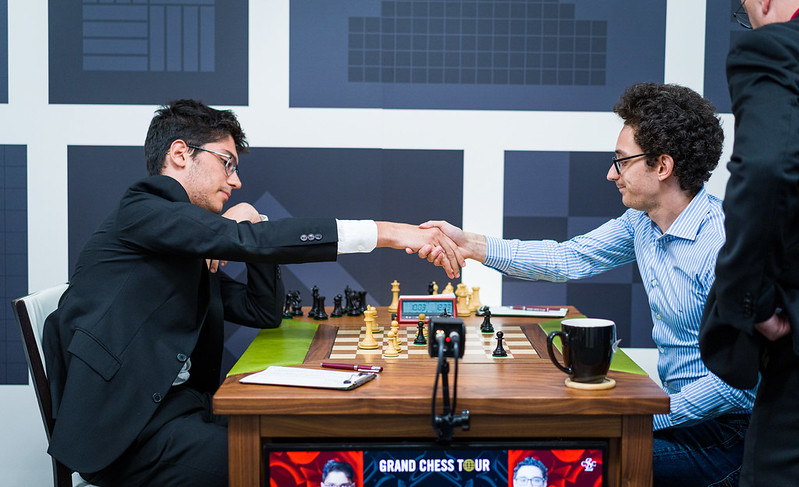 Firouzja-Caruana was the most dramatic, with a unique position by move 5 and huge complications 5 moves later.

Alireza correctly here went for 10.Nxe5!, after an 18-minute think, and ultimately emerged with what looked like a very promising position — only to puzzle our commentators by swapping off into a drawn endgame just when it seemed he could have tortured Fabi.

22.Bxe6+ Rxe6 23.b3 and White’s monster knight on d5 should have let Firouzja push for a win at no risk. Instead he chose 22.Nxf6+?! gxf6 23.Bxe6+ Rxe6 and the game fizzled out into a 34-move draw. Alireza said afterwards that he'd misevaluated the rook endgame. 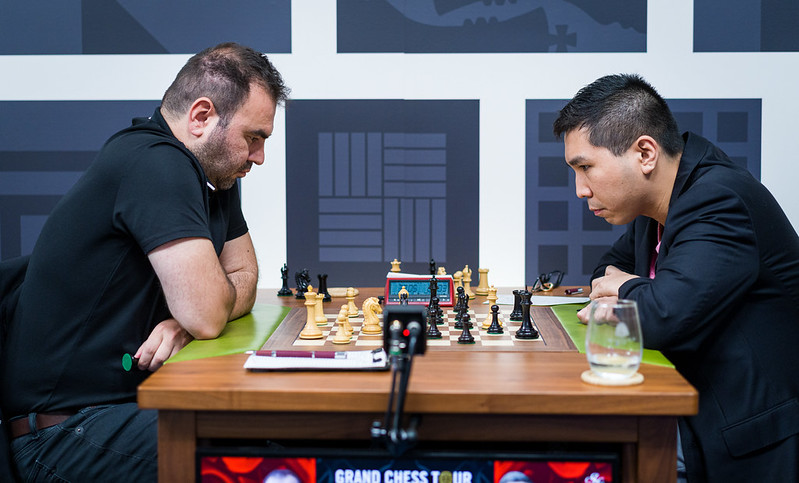 Mamedyarov-So was drawn in 65 moves after Wesley found himself needing to display good technique to defend an endgame a pawn down. He managed, and said afterwards:

I probably got a bit too careless, and then I had to defend in the end. It’s not easy to defend for 4 hours and just sit there in a slightly worse position.

Dominguez-MVL was a 6.Be3 Najdorf where Maxime surprisingly started thinking early on in a position Leinier had played against Bogdan-Daniel Deac in Bucharest in the first Grand Chess Tour classical event of the season. Leinier’s position looked promising, but in the end it was Maxime who won an exchange for two pawns and was applying some pressure until the game ended with bare kings on move 72. 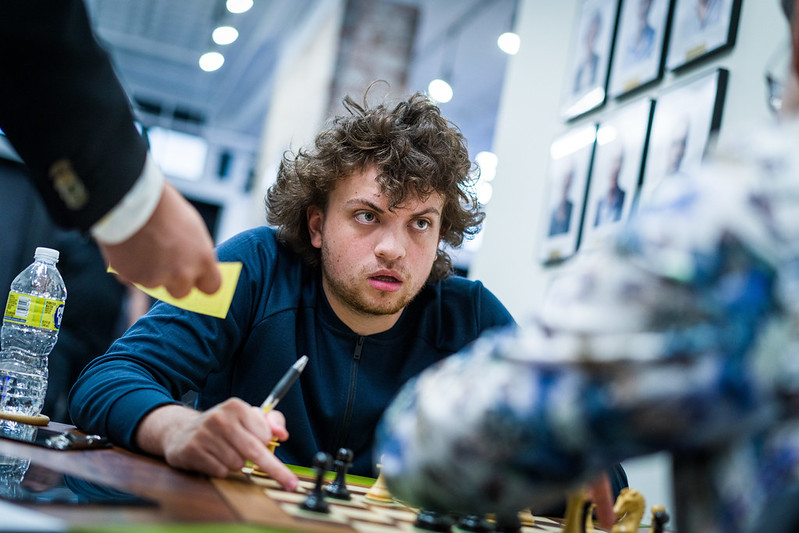 19-year-old Hans Niemann has had an interesting last few weeks. He was planning to play in the Turkish Super League before accepting an invitation to the FTX Crypto Cup in Miami. He then flew to Turkey after all, but was suddenly offered the chance to play in the St. Louis Rapid & Blitz in place of Richard Rapport. Hans’ Turkish team wouldn’t allow that, however, so instead he got to play the Sinquefield Cup — which in turn clashes with the Polish League, where Hans was the no. 1 player for one of the teams.

The young US star isn’t always the most diplomatic. He commented:

Obviously St. Louis is much better than Ankara, Turkey. No offence, but that place is absolutely miserable!

He’s already a formidable player, however, and in Round 1 of the Sinquefield Cup he had Levon Aronian on the ropes for most of the game. 6.a4 was an attempt to surprise his opponent in the Berlin, and even if Levon kept playing fast he nevertheless found himself in a dicey position.

The speed of play ultimately saved Levon, however, since Hans could find nothing concrete and only saw his advantage fizzle out to nothing in time trouble, until the game was drawn by repetition on move 50.

That means Magnus is first, Nepo is last and everyone else has half a point after Round 1 of the Sinquefield Cup. Round 2 has the potential to be explosive, with Nepomniachtchi-Firouzja and Aronian-Carlsen the obvious games to watch.