Sinquefield 6: So, Firouzja and Aronian strike

Wesley So inflicted a first defeat on Hans Niemann in Round 6 of the Sinquefield Cup to take a 1-point lead. Wesley sits out Round 7, so can be caught by Alireza Firouzja, who won a topsy-turvy clash against Shakhriyar Mamedyarov, or by Ian Nepomniachtchi and Fabiano Caruana, who drew their game. The day’s other winner was Levon Aronian, who took down Maxime Vachier-Lagrave. 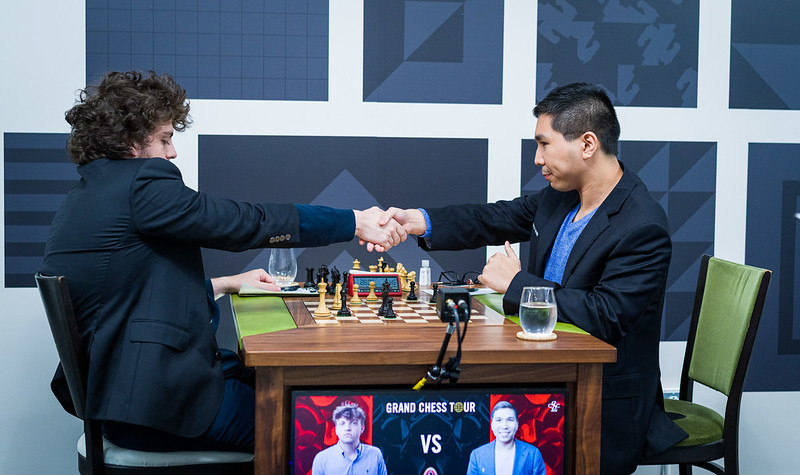 Round 6 of the Sinquefield Cup came after a rest day, so the players had time to process the scandal surrounding Magnus Carlsen’s withdrawal. After four draws in Round 5, there was just one on Thursday. 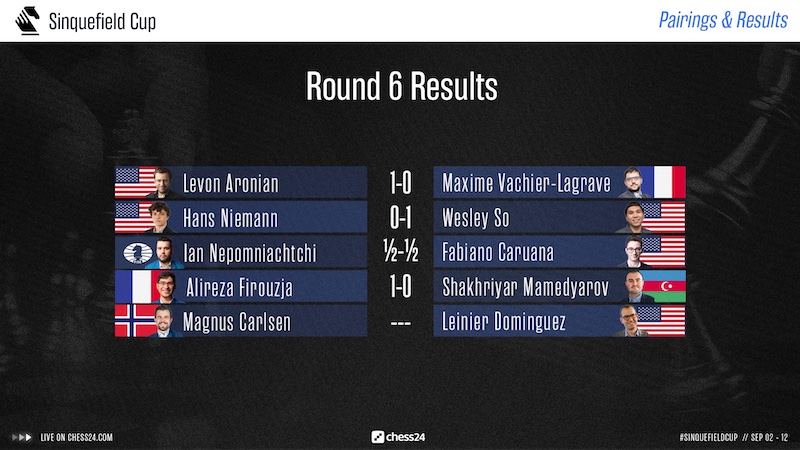 Jan Gustafsson, Rustam Kasimdzhanov and Lawrence Trent commentated on all the action.

Hans Niemann escaped the controversy for a while on the rest day as players and commentators swapped the chessboard for the tennis court.

In a way Wesley So may have been more influenced by things off the chessboard, since he commented after the Round 6 game:

Obviously I just wanted to play solid today, and with all the drama just try to survive, but Hans was obviously playing for a win.

Wesley, who at the start of the interview said “all glory to God of course for giving me the win”, also thanked others.

I’m really grateful for the things that people did to secure this tournament. Of course I feel sorry for Hans, he’s only 19 and there’s a tremendous amount of pressure coming from everybody. We still don’t know 100% what really happened or anything.

On the chessboard we got a Petroff, where it turned out Wesley was better prepared. He felt Hans was essentially blundering a piece on move 20, though there were hidden resources.

Hans had also found a clever way to avoid losing a piece, playing 22.Ng2 f6 23.Bb8, uncovering an attack on the e6-knight.

But Wesley soon liquidated into a position where he could play for a win at no risk. 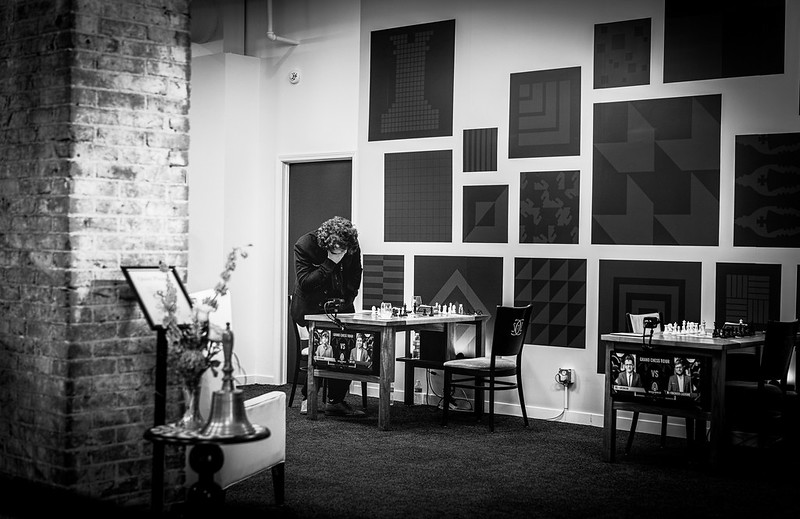 For a while Hans seemed to be holding his own, but what Wesley called a “shocker”, 42.Ke2?, allowed Wesley to enter a winning endgame.

It was a tough game for Hans, and immediately after it was over he was hit by a statement from Chess.com that they had "information that contradicts [Hans'] statements regarding the amount and seriousness of his cheating" on their site.

The win for Wesley saw him extend his lead to a point over Ian Nepomniachtchi and Fabiano Caruana, who drew their Round 6 game. Ian played the opening relatively slowly, by his standards, which was somewhat puzzling, since for 21 moves he was following his own blitz game against Richard Rapport from the 2021 Paris Grand Chess Tour. 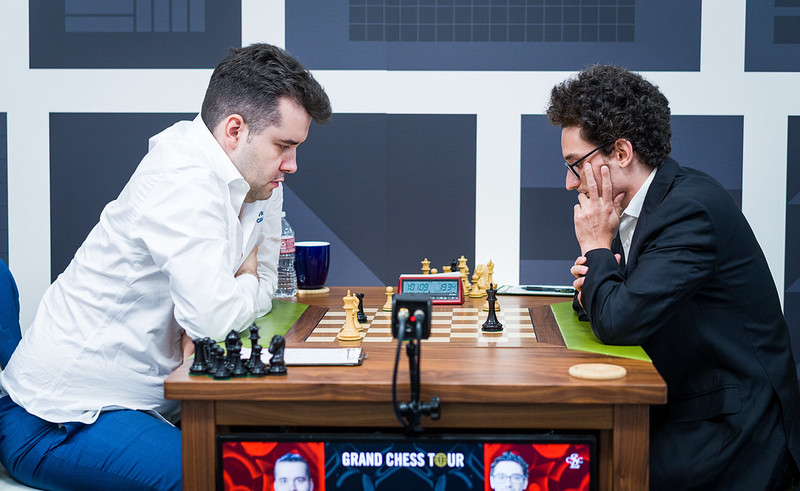 Ian Nepomniachtchi and Fabiano Caruana made the only draw of Round 6 | photo: Lennart Ootes, Grand Chess Tour

Fabi was aware of that game and blitzed out all his moves, though later he slowed down while Nepo returned to his usual speed. Fabi said what followed — defending an endgame a pawn down — “wasn’t super-fun”, but he never looked in real danger before a 53-move draw.

Fabiano later made the enigmatic statement:

The other player within striking distance of Wesley is Alireza Firouzja. He was supposed to play Magnus in Round 5, so had a long break, including some more tennis.

He felt it didn’t work in his favour when he took on Shakhriyar Mamedyarov.

It was a very shaky game. Obviously I had two rest days, and when you have two rest days you’re out of the competition, and I’m happy that I’m getting back to the games.

Alireza admitted to mixing up his move-order in the opening, and then to blundering something big, 19…Bxf2+! 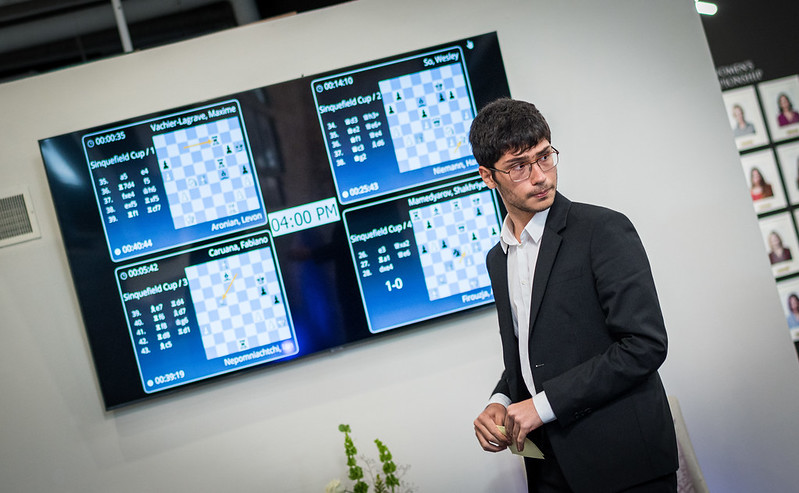 Firouzja-Mamedyarov was the 1st game to finish, but with a result that looked unlikely just a few moves earlier | Lennart Ootes, Grand Chess Tour

Alireza had a theory: “After Bxf2 he saw that my position is still playable, and he was a bit maybe annoyed”. Alireza said he couldn’t make his position work after 22…c4, while the computer spits out moves such as 22…Qd6 (targeting g3) or 22…b6 as keeping a big edge for Black. 22…Nf8?, however, gave up the advantage.

As Alireza pointed out, it was time for Black to try and bail out with 25…Qd4, or grabbing a pawn with 25…Qxa2 first, but instead 25…Nd4? was a losing blunder, running into 26.e3! Firouzja’s theory was that Shakh had simply thought e3 was never playable due to the rook on e8 facing off against the king on e1.

A no doubt shell-shocked Shakh only stumbled on for another two moves, 26…Qxa2 27.Ra1 Qe6 28.dxe4 before resigning.

The day’s remaining game saw Levon Aronian get back to 50% by taking down Maxime Vachier-Lagrave. 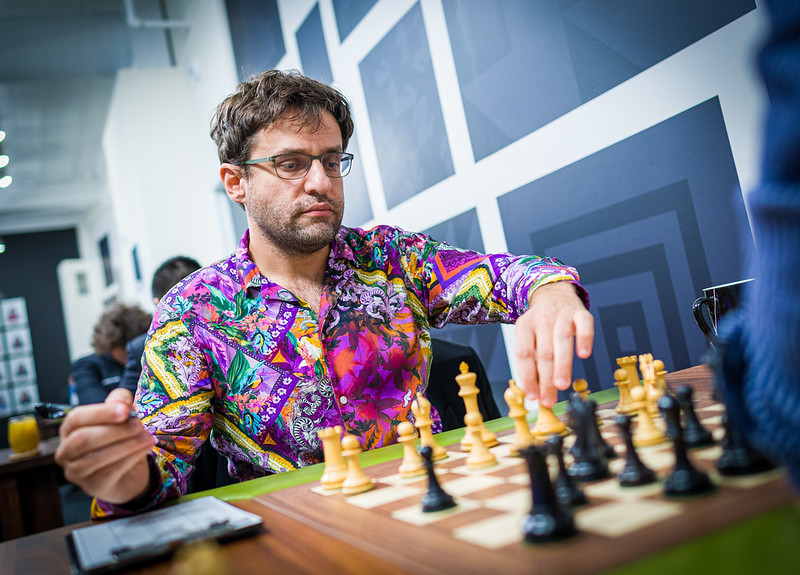 Levon's shirt was impressive even by his own exalted standards | photo: Lennart Ootes, Grand Chess Tour

Levon got to play the novelty 16.Rhf1 instead of the standard 16.Rhe1.

He wasn’t taking all the credit!

I didn’t really find it. When I was struggling with some health issues in India there was a day when we were preparing Fabi for a Najdorf, I think against Maghsoodloo, and Robert Hess came up with this idea, to play Rf1 here, and then we analysed it a bit and we gave Fabi a green light, and well, it didn’t happen on his board, but I think we both were looking for an opportunity to play this very interesting idea!

Levon pointed out in some cases f4 is a threat, while the rook can also target a piece on f6, after pawns are exchanged. The position remained roughly equal, however, until move 19.

19…Rh7! is the move. He manages to put the king on f8 faster, and there’s never danger for him starting with Qh6+.

Instead Maxime went for 19…Rg8!? and was soon in trouble, though Levon wasn’t thrilled with how he handled what follows. “Maybe I should have just grabbed the bloody pawn on e5!” was a memorable quote, but the last try with 36.R7d4! worked like a dream when Maxime replied 36…f5? (36…Re7! and Black is no worse).

After 37.fxe4! Maxime could find nothing better than 37…Kh6, giving up a pawn, and it was remarkable how easily Levon went on to convert his advantage into a win.

That leaves the standings as follows with 3 rounds to go. 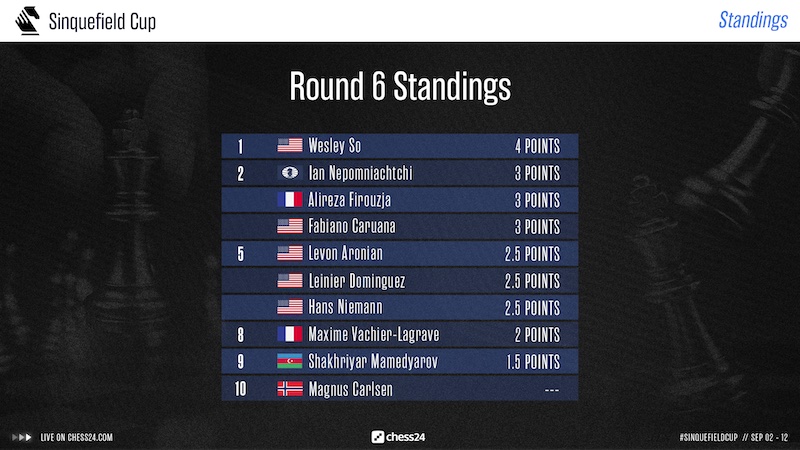 Wesley was meant to play Magnus in Round 7, so gets a bye, meaning he will be caught if any of his three closest pursuers win. None of them have easy tasks, however, with Mamedyarov-Nepomniachtchi, Dominguez-Firouzja and Caruana-Aronian. The other clash is MVL-Niemann.