Chinese no. 1 Ding Liren took a leaf from the Bobby Fischer playbook as he sacrificed a minor piece for a pawn in a fighting 88-move draw against compatriot Yu Yangyi. That was the highlight of the first round of the Shenzhen Chess Masters, with the other games ending in draws at around move 30. Anish Giri only stopped to think (a little) after 25 moves of his game against Mickey Adams, while Peter Svidler found precise moves to thwart Harikrishna’s hopes of exploiting a space advantage. There are no less than nine rounds to go. 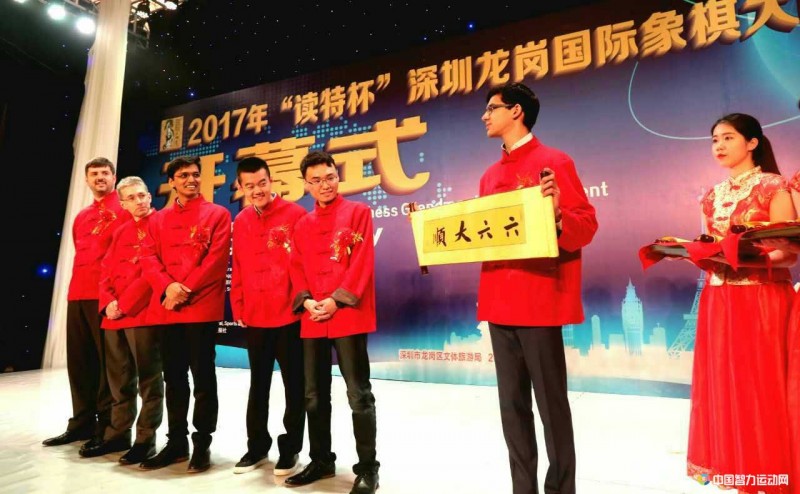 That awkward moment you hold up a sign in one of the few languages you don't speak... | photo: Chinese Chess Federation

It’s been a very quiet month so far for the world’s top chess players, so it’s good to finally have a supertournament to watch. The Shenzhen Chess Masters is a new event taking place in the Friends International Hotel in the Longgand District of Shenzhen, a city of 12 million just north of Hong Kong: 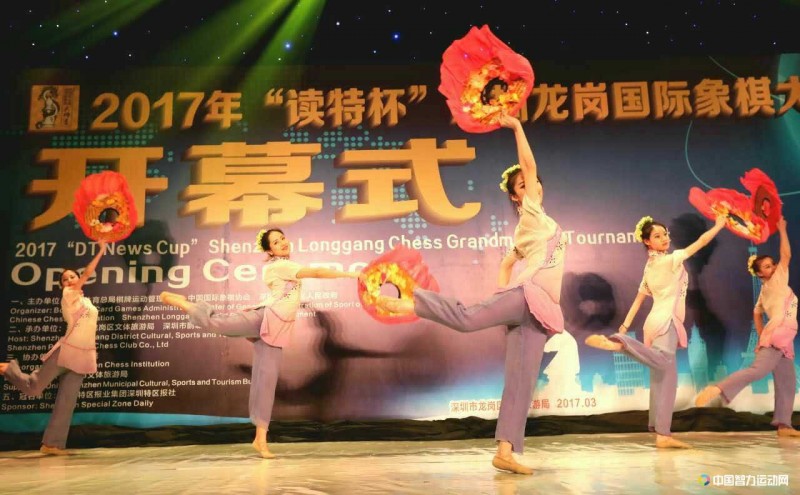 Adams-Giri saw the oldest player in the event, Mickey Adams (45), face the youngest, Anish Giri (22 – though Yu Yangyi is only 2 weeks older). What followed was a demonstration of opening preparation from the young Dutchman, with Giri not pausing for more than 23 seconds until he reached move 25 of a Ruy Lopez. 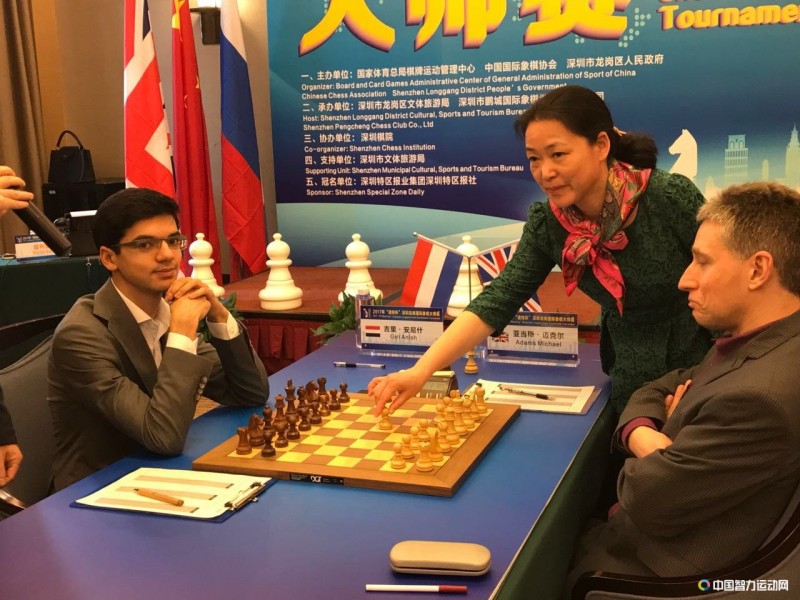 His idea had been seen before, but only in a rapid game from Anna Muzychuk in 2013:

This position had been reached 13 times by White, including 3 times by Sergey Karjakin and once by Magnus Carlsen. Only Anna here played the temporary pawn sac 21…d4 22.cxd4 c4 23.b3, with the idea that Black now wins back the pawn by playing 23…Bc5! and exploiting the pin on the d-file. Black gained a potentially dangerous passed pawn, but Mickey had no trouble steering the game to a drawn opposite-coloured bishop ending a few moves later. 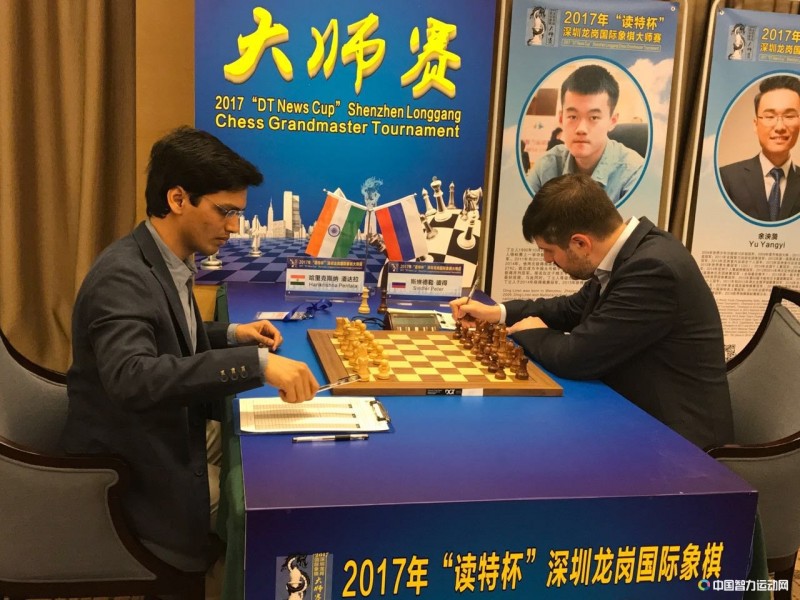 Harikrishna-Svidler was much more tense, with a lot going on in the early stages. Peter Svidler spent 20 minutes thinking how to respond to 14.Nb3:

Without a post-mortem from Peter the following is guesswork, but it’s likely he wanted to avoid Fabiano Caruana’s fate after he played 14…Rac8 against Ding Liren in Round 1 of the 2015 Tata Steel Masters. The Chinese no. 1 then expanded with the tricky 15.e4!, when capturing the pawn would lose Black material. Fabiano eventually won that game, but not because of the opening.

It turns out Svidler’s 14…Rfd8 novelty does successfully stop 15.e4, though, since in one Pacmanesque line it turns out White has no rook to eat on f8 after the rook has moved to d8. In the game 15.Be5 a5 16.c5 Qa6 17.Qb2 followed, with Svidler then solving his problems with the precise 17…Qb7!

The white bishop’s threat of coming to c7 and hitting the a5-pawn is stopped, while Black is now threatening a4. The f5-bishop takes away the b1-square from White, and after 15 minutes’ thought Harikrishna could find nothing better than the awkward 18.Qa3. Svidler’s 18…Be4 set the scene for the exchanges that liquidated the queenside and led to a 30-move draw.

Hari wasn’t too disappointed with how things had gone:

He was also enjoying life as a TV star:

Perhaps jet lag and general travel fatigue have been an issue for the foreign participants, but without such worries Yu Yangyi and Ding Liren played out a very hard-fought 88-move draw. 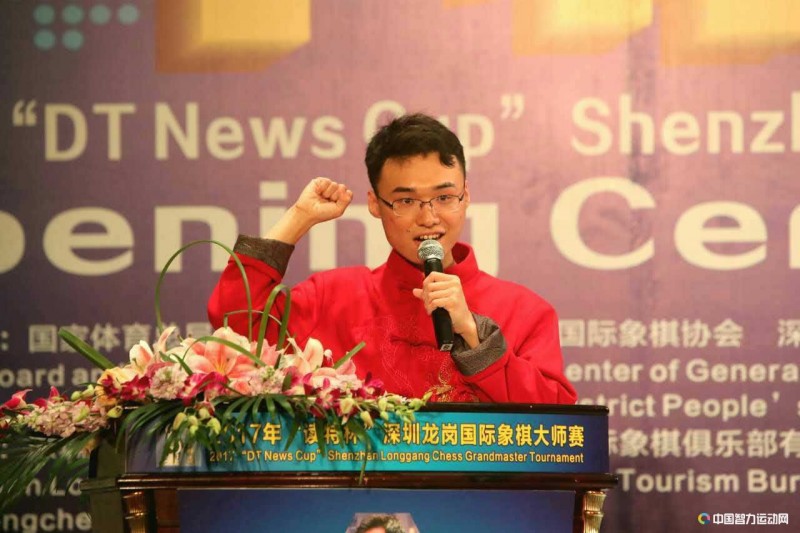 The most memorable moment had shades of Bobby Fischer’s famous bishop sac on move 29 of his first game of the World Championship match with Boris Spassky:

Here Ding Liren played 40…Nxh2! despite it being clear that after 41.f3! the knight’s days are numbered. The sacrifice was at least sound, though, and by move 48, when the knight fell, Black had created a dangerous passed a-pawn:

Fast forward five more moves and it might seem it was all over for White, as the knight can’t stop the pawn...

Yu Yangyi had things under control, though, and played 54.e4! – the e-pawn raced up the board and queened immediately after the black a-pawn. Although the queen ending was played on for another 20 moves the drawn outcome never looked in doubt. 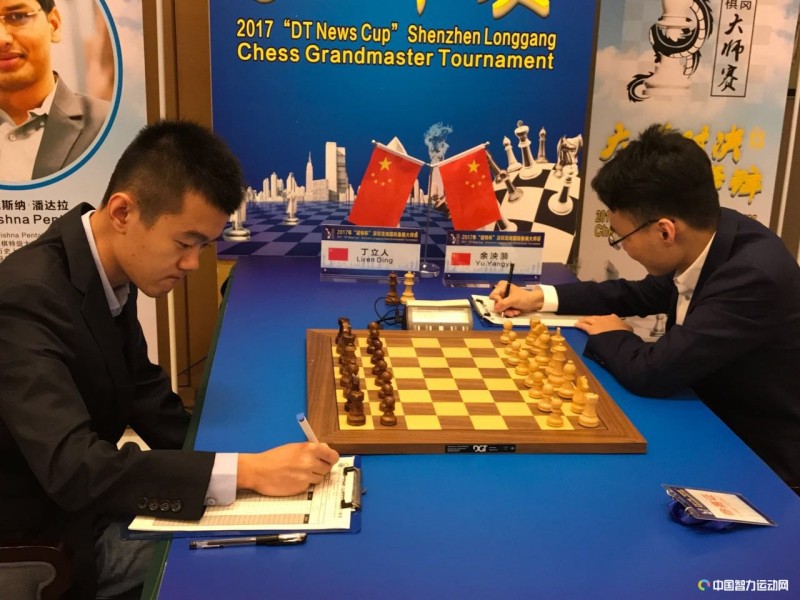 Ding Liren and Yu Yangyi showed they were in a fighting mood | photo: Chinese Chess Federation

In Round 2 Giri and Svidler get to try their luck with the white pieces:

The action is live here on chess24 at 14:30 local time, with a 30-minute change to the original schedule apparently agreed at the technical meeting. That’s good news for chess fans in Europe, since that translates to 07:30 CET until the clocks go forward for summer time on 26 March and it becomes 08:30 CEST.

You can also watch all the action for free in our mobile apps: