India’s Adhiban has bounced back after a disastrous Aeroflot Open to take the joint lead with 5.5/6 at the Sharjah Masters. He’s joined by 26-year-old Ukrainian Martyn Kravtsiv, who scored an impressive win over Gawain Jones in Round 6. Six players, including Laurent Fressinet and Wang Hao, are in a chasing pack half a point behind, while the GM norm hopes of 11-year-old Praggnanandhaa suffered a blow when he lost to Eduardo Iturrizaga, the 4th strong grandmaster he’s met in Sharjah. 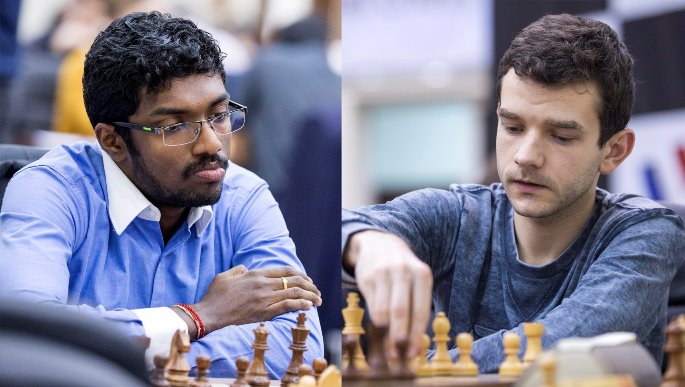 You can play through all the games from Sharjah by clicking on a result in the selector below – hover over a player’s name to see all his or her results so far:

Adhiban and Kravtsiv have both won five games and only drawn against each other in Round 5, on a day when the top six boards finished in draws. They both took the lead in a similar fashion in Round 6. Adhiban needed 82 moves to show the superiority of a bishop over a knight against young German Grandmaster Rasmus Svane. 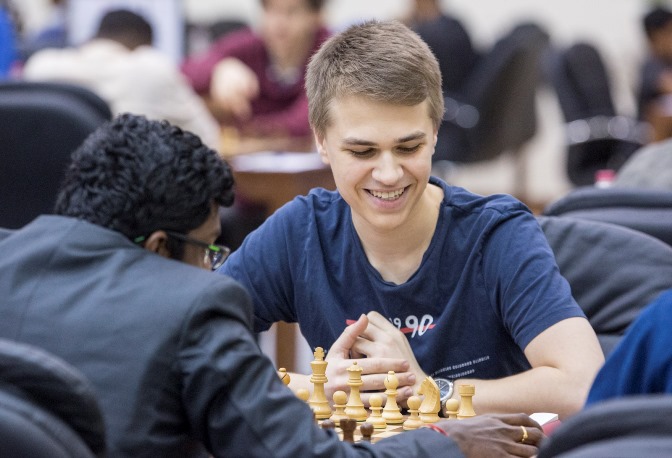 Rasmus probably wasn't smiling so much by the end of the game... | photo: Maria Emelianova, official website

Danny King made that his Game of the Day:

Martin Kravtsiv claimed the scalp of Gawain Jones with a slow motion kingside attack. 38.g4! was the harbinger of doom:

There’s no way to stop the kingside being opened up, with the white rooks ready to swing into action. Gawain put up a heroic fight, forcing Kravtsiv to play on to move 95 – no easy matter given there’s no extra time on move 40 in Sharjah – but ultimately it was in vain.

The open in Sharjah has had a strange rhythm, since the accelerated pairings system meant that only in Round 4 did we get the mismatches you usually see in Round 1, with a 400+ point rating gap on most of the 95 boards. 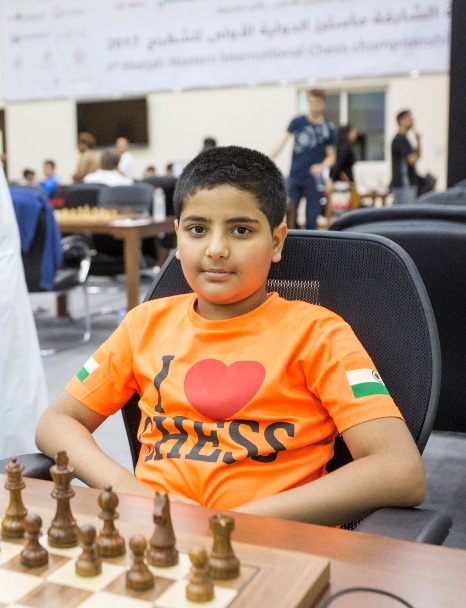 Raunak Sadhwani (2218) is a talented Indian kid, but he was thrown in at the deep end on Board 1 vs Wang Hao in Round 4! | photo: Maria Emelianova, official website

We also saw our prodigies vanish briefly from the limelight, since they slipped off the live boards. None of the four players we looked at in our first report after Round 2 has done too badly since, but there have been few stand-out results: 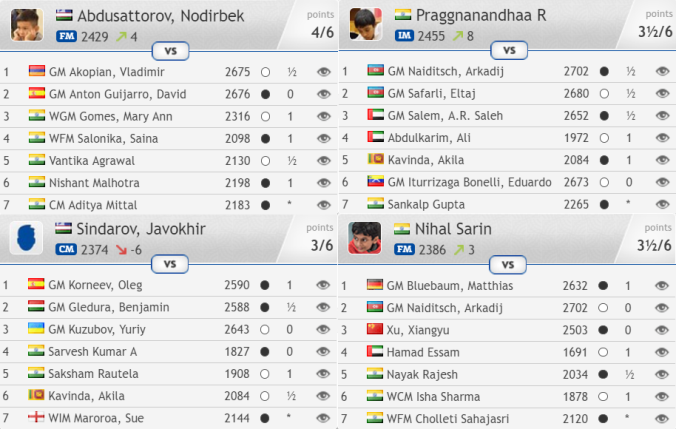 The most anticipation, as always, has been around 11-year-old IM Praggnanandhaa. In Round 3 he scored his third draw in a row against a top player, surviving a pawn down against local hero Saleh Salem to get a 101-move draw. 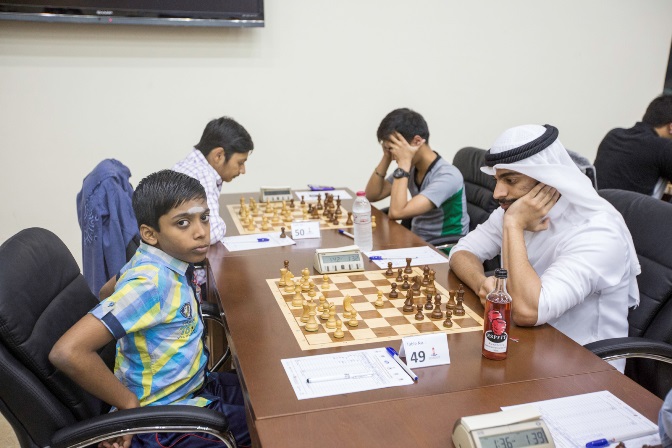 Then wins against weaker opposition in Rounds 4 and 5 set up another challenge, Venezuela’s 27-year-old 2673-rated Eduardo Iturrizaga.

The game was a sharp and interesting fight, but ultimately Praggnanandhaa was let down by his clock-handling, since he was down to under a minute when it became a matter of life and death. 30.f4? was a losing blunder, though Praggnanandhaa was given a chance to redeem himself when Iturrizaga also missed the win. He didn’t take it, and after 32.Rc3? the game was finally decided:

Of course the fight for a GM norm is far from over for Praggnanandhaa, who currently has a 2518 rating performance (he needs 2600) but still has three rounds to go. 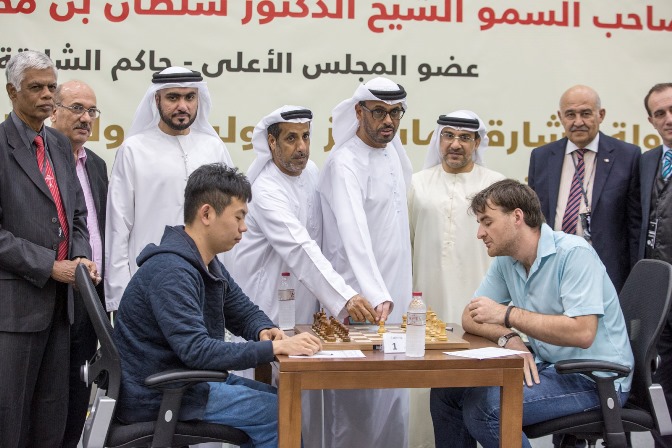 China’s Wang Hao has drawn his last two games to sit on 5/6, but he got to play one of the finishes of the event so far in Round 3. Indian GM Sethuraman could even have been winning a dicey position if he’d played 21…Qd5!, but instead 21…Nh6? set up a blockbuster finale:

Some top players have struggled in Sharjah. 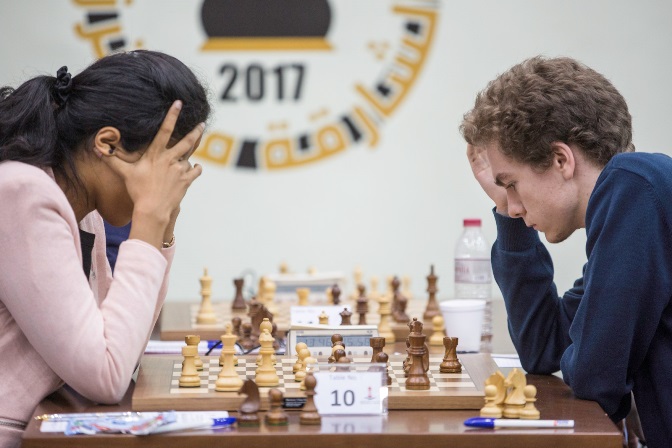 Also in Round 3 Spain’s David Anton was better against Women’s World Championship semi-finalist Harika Dronavalli. He then grabbed a poisoned pawn, though, and was soon dead lost, until he played 64…Kh6:

There’s simply no defence to 65.Rg8!, when Black will have to give up his queen to stop mate, but instead 65.Rf7? allowed 65…Rf3!, and Black is right back in the game. There was still everything to play for, but eventually a draw was agreed in 91 moves. In Round 6 Anton’s luck finally ran out, though, as he was comprehensively beaten after taking another poisoned pawn against Indian IM Srinath Narayanan. However, Srinath isn't going to be an IM for long!

So with three rounds remaining the standings at the top look as follows:

Three 2700+ players, Yuriy Kryvoruchko, Arkadij Naiditsch and top seed Radek Wojtaszek are among the 21 players on 4.5/6. Radek showed Danny King his Round 6 game against Debashis Das, a miniature win for Black: