The inaugural Sharjah Masters got off to a bumpy start on Thursday with no shows and forfeits, but it’s a fascinating event to watch. In Shakhriyar Mamedyarov’s absence Radek Wojtaszek is the top seed, but the main focus may be on a group of kids likely to transform the chess world by the middle of the 2020s. India’s 11-year-old Praggnanandhaa and 12-year-old Nihal Sarin and Uzbekistan’s 11-year-old Javokhir Sindarov and 12-year-old Nodirbek Abdusattorov have already claimed some GM scalps and impressive draws. 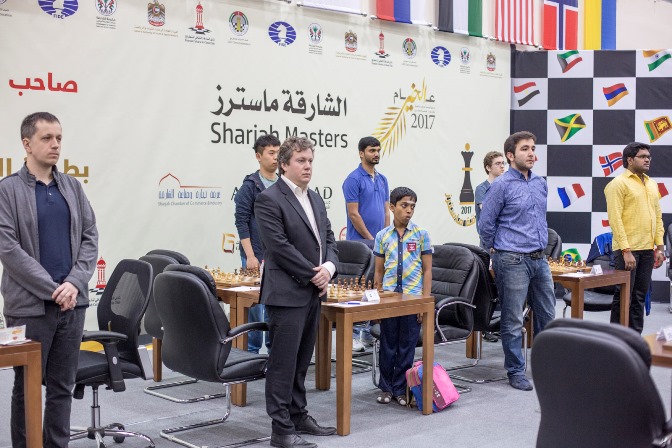 The 1st Sharjah Masters is a 200+ player 9-round open taking place in the world’s biggest dedicated chess club, the Sharjah Cultural and Chess Club – the same United Arab Emirates venue that saw the recent Sharjah Grand Prix. The top seed at the event looked set to be Shakhriyar Mamedyarov, but when the delayed pairings finally appeared it turned out that he was missing alongside some other top players who had been listed such as Etienne Bacrot. There was worse to come, since it soon became clear the paired players including many more absentees, leading to multiple forfeits, including three on the top five boards! 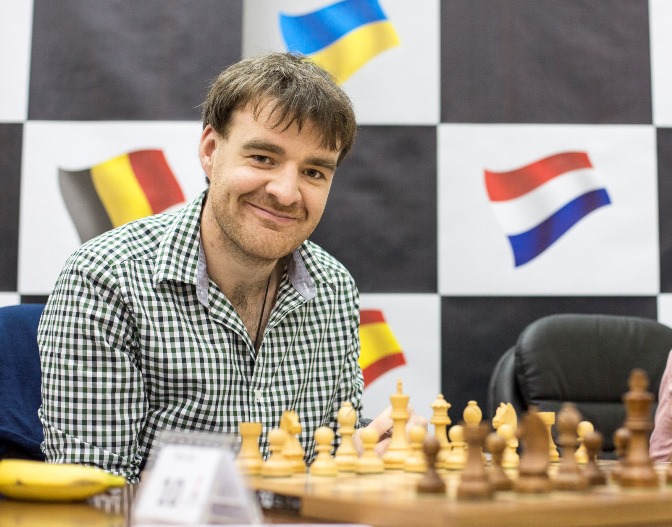 Gawain Jones was one of the few top players to both play and win in Round 1 - earlier this year the Englishman won the Tata Steel Challengers, while last year he won the nearby Dubai Masters | photo: Maria Emelianova, official website

An accelerated pairing system that meant the top players immediately faced strong opposition in the 2450-2500 rating range, led to a very unusual set of results for the first round of a big open – on the top 13 boards only Adhiban and Gawain Jones managed to win without a forfeit. Only in Round 2 was normal service restored, with the favourites winning on 7 of the top 8 boards. You can replay all the games from all rounds of the tournament using the selector below – hover over a player’s name to see all their results:

Let’s now take a look, as promised, at some of the world’s most exciting youngsters, beginning with 11-year-old Praggnanandhaa.

As the youngest ever International Master in chess history the Indian talent needs little introduction at this stage. His quest, of course, is to beat the record of Sergey Karjakin, who became a grandmaster at the age of 12 years and 7 months. He’s yet to score one of the three grandmaster norms he requires, but with almost a full year to spare it would be a brave man who bets against him. Can he get his first norm here? Well, his start has been promising!

Facing 3rd seed Arkadij Naiditsch with Black in the first round is almost as tough as it gets, and the writing seemed to be on the wall when Arkadij won a pawn and took the game into the ending. There’s no extra time on move 40 in this event, just increments, but Praggnanandhaa kept his cool and held the draw. The kid also had to defend a tricky endgame against Naiditsch’s Azerbaijan teammate Eltaj Safarli in the next round, but again proved up to the task. 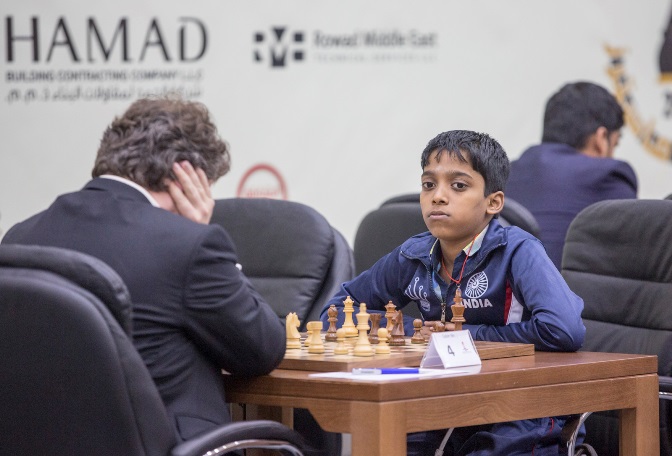 This kid is not to be underestimated... | photo: Maria Emelianova, official website

In the next round he faces local hero Salem Saleh, who experienced one of the most painful moments of the tournament so far. Pushing for a win against an Indian IM he went horribly astray with 41.Re7?? (41.e6! was the only move):

Biggest scalp yet for Nihal Sarin

12-year-old Nihal Sarin may be somewhat in Praggnanandhaa’s shadow, but he told Danny King that his Round 1 win with the black pieces over Matthias Bluebaum was already his 6th against a grandmaster. Bluebaum was also the strongest player he’d yet beaten. Watch him go through his game:

There might have been a real sensation in Round 2, since the kid went a pawn up against Arkadij Naiditsch, but Sarin found himself perilously low on time, lost his advantage and then blundered with 55.Re6?, after which there was no turning back. Here’s the position after 57.Ra6 (two moves too late):

It’s tough to be a chess prodigy! 12-year-old Nodirbek Abdusattorov was the World U8 Champion, was stunning grandmasters at the age of 9, and holds the record for being the highest rated player ever at the ages of both 11 and 12 (according to Chess by the Numbers). He was rated higher than he is now two years ago, though, and isn’t likely to challenge Karjakin’s record for becoming a GM. 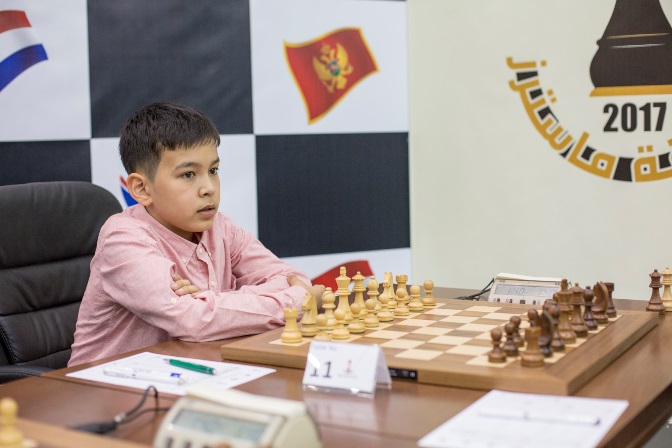 Of course all that means little, ultimately, since it’s not how a fast a player rises but where their ceiling eventually turns out to be that counts. Abdusattorov showed he can live with the best when he confidently drew against 2675-rated Vladimir Akopian in Round 1.

In Round 2 he had a tougher time. 21-year-old Spanish Grandmaster David Anton still gets called “El Nino”, but as scoring the top performance in this year’s Tradewise Gibraltar Masters showed, he’s no kid anymore. Anton correctly grabbed a queenside pawn, judging that Black’s kingside attack would come to nothing. So it proved, with a wild piece sacrifice soon refuted. The most memorable move of the game is perhaps after Abdusattorov’s 35…fxe3:

It’s not often you get to see quadrupled pawns!

Javokhir Sindarov: With a little help…

Sindarov is another uber-prodigy from Uzbekistan. 11 and even younger than Praggnanandhaa, he holds the current record for having been the highest-rated 10-year-old ever at 2299. He doesn’t really need too much help, which is why his current score is a little flattering!

Oleg Korneev was one of the absent players mistakenly paired in Round 1, so Javokhir simply gained a point with the black pieces for sitting around and waiting. 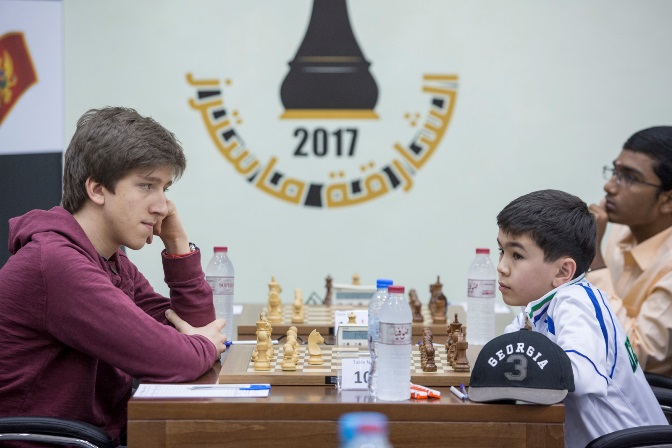 In Round 2 he came up against Hungarian rising star Benjamin Gledura, and it’s fair to say the dramatic game didn’t entirely go to plan:

Javokhir caught a huge break when Gledura here played 55.Rxd7?? and after 55…Qxh3+ a draw was agreed due to the simple perpetual check on g3 and h3. All Benjamin needed to do was add one more move, though – after 55.R1f6+! Kh5 and only then 56.Rxd7 there’s no perpetual check after 56…Qxh3+, since the rook has left the f1-square and the white king can take refuge on the queenside.

It’ll be fascinating to watch how the youngsters get on in the remaining rounds. So far at the top, meanwhile, there are 31 players on 2/2, including Gawain Jones, Laurent Fressinet, Adhiban and Wang Hao. It also wouldn't be a top open without some very strong female players: