Top seed Maxime Vachier-Lagrave got off to a winning start in the Sharjah FIDE Grand Prix after outfoxing Li Chao in a complicated ending. He was joined by Mickey Adams, whose pawn sacrifice was too much for local hero Saleh Salem to handle, as well as Richard Rapport, who tempted Ding Liren into a blunder in a game Pepe Cuenca analyses for us. The first day of the event was distinctly underwhelming, however, in keeping with a very low-key build-up. 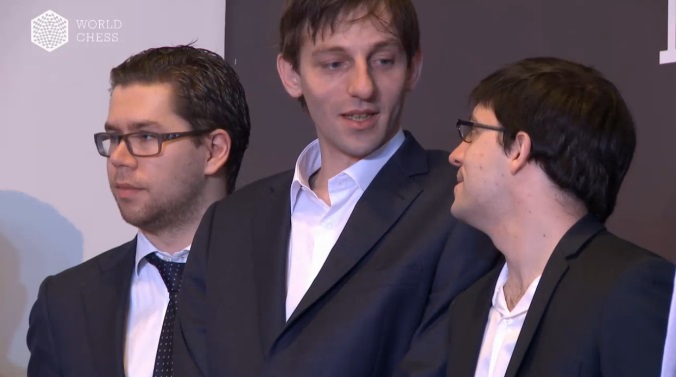 Some events on the chess calendar, such as the Candidates Tournament or the World Championship match, essentially sell themselves, since the interest in the outcome is huge. The FIDE Grand Prix series, however, has never been in that category. Although two players qualify to the Candidates Tournament, the very top players tend to stay away due to the relatively low prize fund, while the structure of the event means that it’s only in the final one or two tournaments (or even rounds) that it’s clear who’s playing for what. That perhaps explains why Agon has largely steered clear of the series after its first organisational attempt in London in 2012 ended in acrimony over unpaid fees to FIDE. 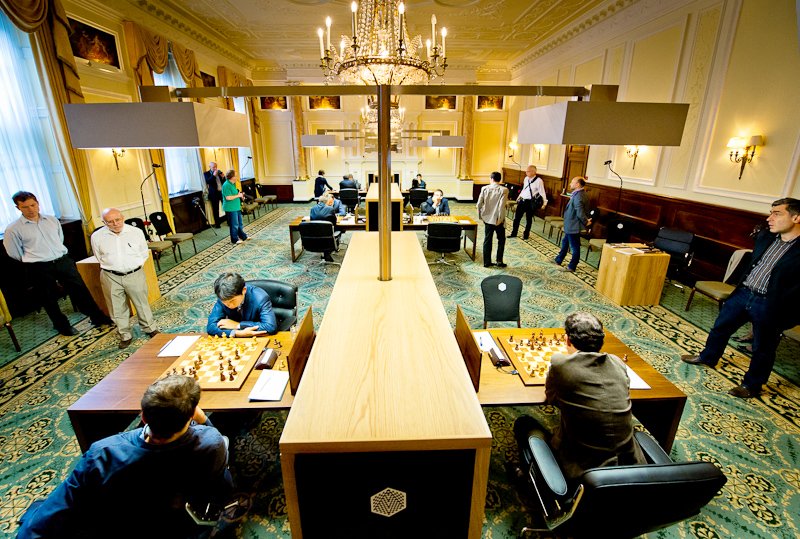 Agon's first event involved some dubious furniture and a beautiful venue that was unfortunately closed off to the public | photo: Fred Lucas, london2012.fide.com

Since then the World Chess Federation has stepped in to do a competent job of holding an event that gives a valuable chance to chess players slightly below the rank of super-tournament regular.

It was meant to be all change this year, though, as Agon took full control, changed the structure to a Swiss tournament so more players could take part and attempted to raise funds by allowing players/federations to buy a place in the event. It’s unclear to what extent that succeeded, since no details have been released, just as it’s impossible to assess the significance of the sponsorship deal with Kaspersky Lab, since no numbers were quoted, but at least the press conference in Sharjah on 6 February left the organisers 12 days to iron out problems and build up interest in the event.

Instead we were left with a vacuum. The final line-up for Sharjah didn't become clear until a day or two before it started, and even now the players section of the site still includes Wei Yi rather than Hou Yifan. For basic information such as the format of the event, time control, starting time of the games or prize fund fans need to go elsewhere, while the photos sections is empty after the first round. Anyone waiting for a simple but usable sharjah2017.fide.com site has been left disappointed.

Wei Yi briefly replaced Hou Yifan due to a misunderstanding over whether the Women's World Champion could play, but he still remains on the player list | source: worldchess

The Opening Ceremony that followed was in keeping with the times. Agon specialise in design and PR, and have never shied away from “alternative facts”. So we learned before the New York match that it was going to be the first ever use of pay-per-view in chess (forget Anand-Kramnik in Bonn in 2008) and the first ever use of virtual reality for a top sporting event (who cares about the Rio Olympics?). This time they boast on their website, “for the first time in the history of chess, a confession booth has been built in the players area”, which no doubt left some event organisers scratching their heads… 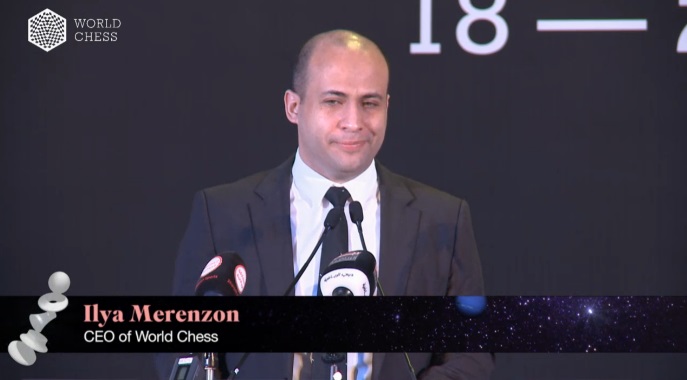 Ilya's previous PR mission of promoting Russia in the US through the glossy "Russia!" magazine (the website will be familiar to World Chess users) could be argued to have succeeded spectacularly of late... | source: Livestream

Agon CEO Ilya Merenzon let go at the Opening Ceremony, perhaps inspired by FIDE President Kirsan Ilyumzhinov before him talking about trying to raise the number of chess players from 600 million to 1 billion:

I also wanted to address those who are not only in this room, but millions of people who are watching this live now on worldchess.com and on FIDE and globally around the world.

The actual number watching at that moment was shown clearly on Livestream, and was in the range of 40-100. That wasn’t even the end of it. No speech can be complete without a “first”, so we had:

There is a player from here, from the club [the Sharjah Cultural and Chess Club venue], who will take part in the Championship cycle and who has a chance to become the chess World Champion. It's the first time ever.

Except it’s not. Saleh Salem played in the 2011, 2013 and most recently the 2015 World Cup, so on each occasion he had a chance to qualify for the Candidates Tournament and win the World Championship.

Chess fans probably weren’t the intended audience, however, since there was almost no promotion of the live broadcast. Strangely, though, there was almost no promotion of the first round of the tournament either, with the official Twitter account maintaining radio silence. Usually others would jump in to create a buzz about the event, but it’s hard to feel the urge to do so when an organiser is trying to make it as hard as possible for you to cover their tournament.

It’s time to switch gears, though, since it’s unfair on the players and chess not to focus mainly on the action on the board!

Let’s liven things up straightaway with the one and only Pepe Cuenca, who looks at how Richard Rapport beat Ding Liren:

Richard didn’t do it just for himself, but to celebrate his wife’s birthday!

Li Chao’s Petroff’s Defence got the same treatment Maxime Vachier-Lagrave usually metes out to the Berlin, while Mickey Adams felt that it was somewhat naïve for Saleh Salem to accept a pawn sacrifice in the opening:

When Peter Doggers repeated that Saleh Salem had called it the “principled” choice Mickey agreed, but noted you don't expect people to play the principled move when they know you've prepared for it. White soon took over, but although it was ultimately the longest game of the day to finish the outcome was seldom in doubt.

Among the draws Hou Yifan-Nepomniachtchi saw the Women’s World Champion resist heavy pressure both on the board and the clock, while Grischuk-Hammer was an incredibly slow-played encounter by both participants that exploded in the inevitable time pressure. Grischuk won a pawn, but then Jon Ludvig handled the ensuing complications better:

Black was still down a pawn at the end, but it’s unclear if Hammer was right to accept Grischuk’s draw offer in this position:

The players discussed the game afterwards:

As it’s a Swiss tournament the winners and losers are paired against each other, but as there are so few players and a relatively small difference in strength there are no easy games. Rapport vs. MVL is the obvious one to watch: