Shankland up to world no. 30 with Capablanca win

Sam Shankland has added victory in the Capablanca Memorial to his US Championship triumph and is now rated 2717.2 and world no. 30. He blew away the field in the second half of the tournament to finish on an unbeaten +5, 1.5 points clear of Alexey Dreev and 2 points ahead of David Anton in 3rd place. Peru’s Cristhian Cruz had the best tiebreaks in the open after five players, including Pepe Cuenca, finished on 7.5/10. 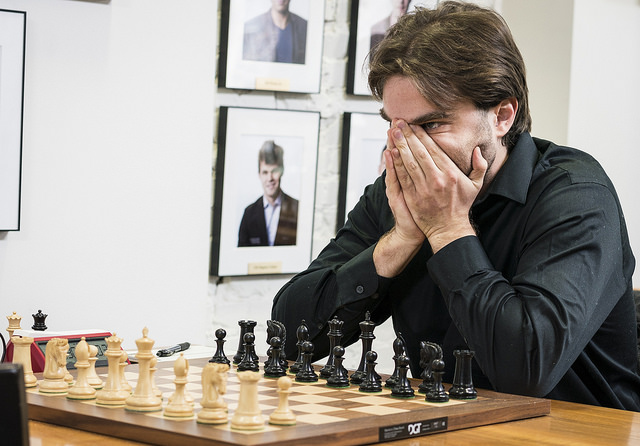 Shankland has been channeling his inner Magnus for the last two events! | photo: Lennart Ootes, US Chess Champs

When we reported on the Capablanca Memorial in Habana, Cuba at the halfway stage, Alexey Dreev had matched Shankland all the way, but he simply couldn’t live with him in the second half. Dreev drew his remaining games in 33, 19, 18 (vs. Shankland), 22 and 30 moves, while Shankland engaged beast mode to score 4/5. You can replay all the games using the selector below:

The most impressive part of Shankland’s victory was how easy he made everything look. He was never in time trouble, seemed to know exactly what he was doing in the opening (he did, after all, help Magnus Carlsen prepare for the match against Sergey Karjakin) and kept things simple. In Round 6 Russia’s Aleksandr Rakhmanov was in trouble by the time he played 15…Na5?!

There are multiple ways for White to play for an advantage, but Sam chose the straightforward plan of playing Nd2-Nb3, exchanging the a5-knight and pushing his pawn chain, which by the time of 27.d6 had become ominous:

…but sometimes they don’t need to! Black was unable to prevent the White pieces invading the position, or the c-pawn getting to c7, and the rest was easy.

At times Sam took the elegant, “positional” approach a little too far. This is the next game against Lazaro Bruzon:

White is winning material here almost however he chooses - 27.Rxe5! is best, but e.g. 27.Re4 is also crushing. Shankland instead went for 27.Qxe5!? Qxe5 28.Bxf7+ Kf8 29.Rxe5 Rxd6 30.Be8, when he was a mere pawn up. It’s hard to criticise, since he played fast and won smoothly in his opponent’s time trouble, but it might not work out so well against a Carlsen or Karjakin.

That left Shankland a full point clear of Alexey Dreev, and he all but confirmed the title with two rounds to go when he made an 18-move draw with Black against Dreev in Round 8. The last potential obstacle was 22-year-old Spanish player David Anton. We mentioned that in the first half David’s ambitious play had backfired, but he stayed true to his style and was richly rewarded with three wins in a row from Rounds 6-8. The final position against Yusnel Bacallao was particularly picturesque:

Anton had an outside chance of 1st place if he could beat Shankland, but with the white pieces Sam made no mistake, going for a known drawish line and getting the draw in 24 moves.

The last round of the tournament was overshadowed by the tragic air crash in Habana that had left over 100 people dead the day before. A minute's silence was held before the games began:

Sam merely needed a draw to be sure of overall victory, though in the end, since Dreev didn’t win, a defeat would have been enough. Instead he showed a bit of Caruana style to beat Cuba’s Yusnel Bacallao anyway. He’d joked at halfway that beating both of the Cuban players wasn’t good for his chances of being reinvited the following year, but now he’d done it twice!

The game was over shockingly fast, with Bacallao missing the chance to play ambitiously with 12.e4 and soon allowing a powerful pawn sacrifice by his opponent. Under pressure, the Cuban then unnecessarily gave up the exchange, and the last straw was 31.Bb4?

The desire to stop Rb1 is understandable, but after 31…Qd4+! 32.Qxd4 exd4 White resigned, since the black rook, bishop and d-pawn will totally dominate White’s ragged army.

That meant Shankland had won the tournament by 1.5 points with a 2831 performance, a little short of his 2884 performance in the US Championship, but not too shabby! 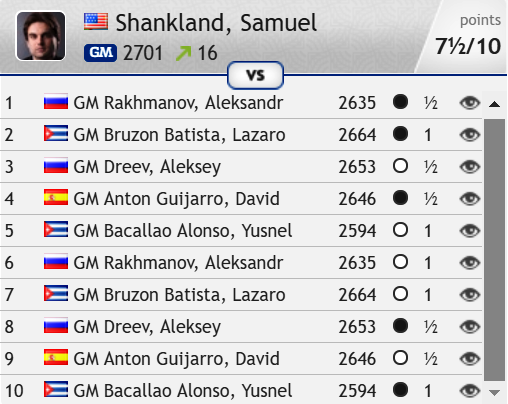 A fellow player who made a leap into the 2700 club recently, Russia’s Vladimir Fedoseev, is hoping to throw down the gauntlet to Shankland soon. He shares the same manager as Karjakin, and told Sport Express recently:

Yes, my manager Kirill Zangalis and I are already starting to prepare a challenge to the American Grandmaster, and we hope that we’ll be supported in that by the Russian Chess Federation – in the near future we plan to send a challenge to the US and the Saint Louis Chess Club.

Sam will be busy for now, though, since he still can’t rest on his laurels. He’s the top seed for the American Continental Championship that starts in Montevideo, Uruguay on 1 June. It's fair to say he has a big target on his back.

The final standings of the Capablanca Memorial looked as follows (you can open any game by clicking on the result):

There was much more intrigue in the final round of the accompanying open. Bator Sambuev was threatening to pull off a spectacular “Swiss gambit” by losing both his first two games and then going on a run of 7 wins in a row against weaker opposition. 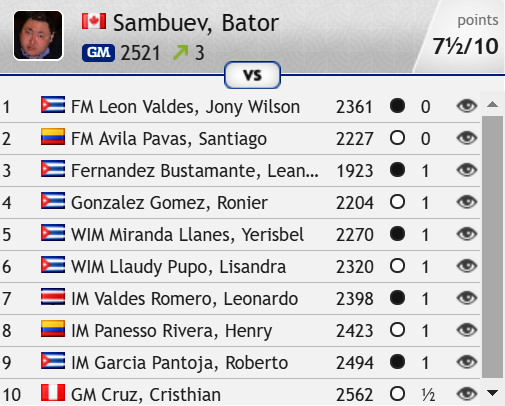 If he’d won the last game he’d have been the champion, but Peru’s Cristhian Cruz survived early pressure to clinch the draw that gave him the title on tiebreaks.

Pepe Cuenca was among the five players tied on 7.5/10 after scoring the only win on the top boards in the last round.

It had ended up a fine tournament for the chess24 crew, with our Spanish director David Martinez not only seeing his student David Anton end well but gaining 10 rating points himself with a 6.5/10 score. 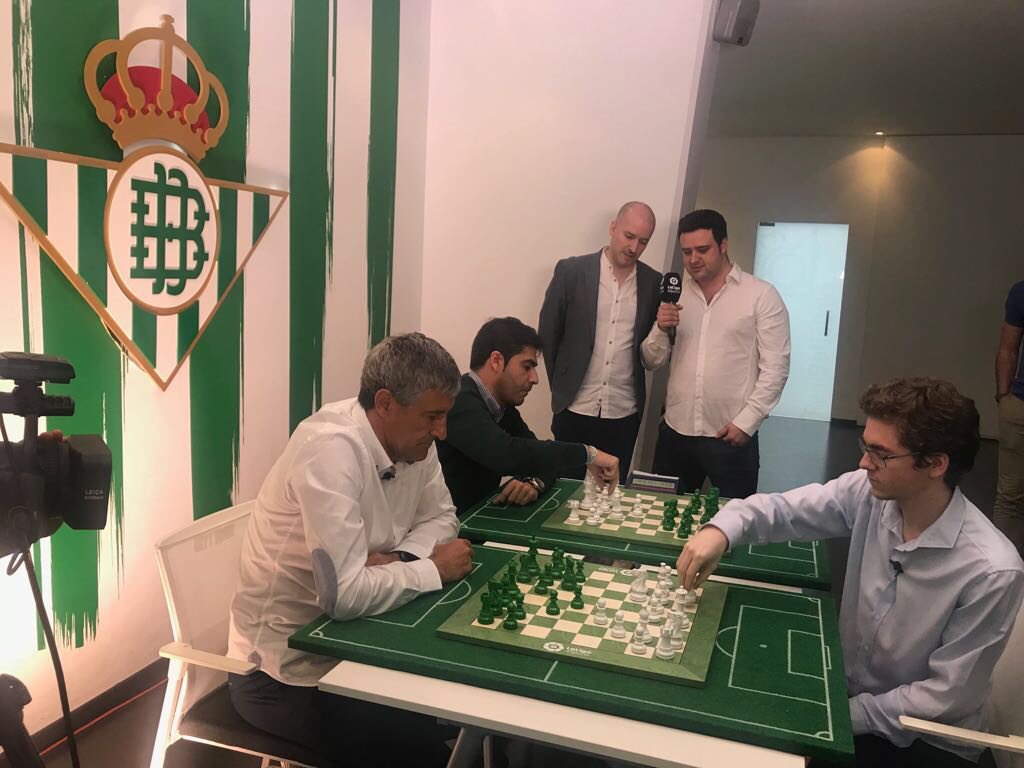 Congratulations to them, and of course to Sam Shankland! At this rate he’s threatening to barge his way into elite company, while the US team for the Olympiad later his year is warming up nicely.