Sam Shankland has won the Prague Masters with an unbeaten 5.5/7, climbing 14 places on the live rating list to cement his position back in the 2700 club. The tournament had looked set to go to a playoff after Radek Wojtaszek blundered in the final round and allowed Jan-Krzysztof Duda to score a 3rd win in a row, but just when Sam looked sure to draw his game, Jorden van Foreest went astray and fell to defeat. Wojtaszek took clear 3rd, while Jorden, Nils Grandelius and David Navara all had tournaments to forget. 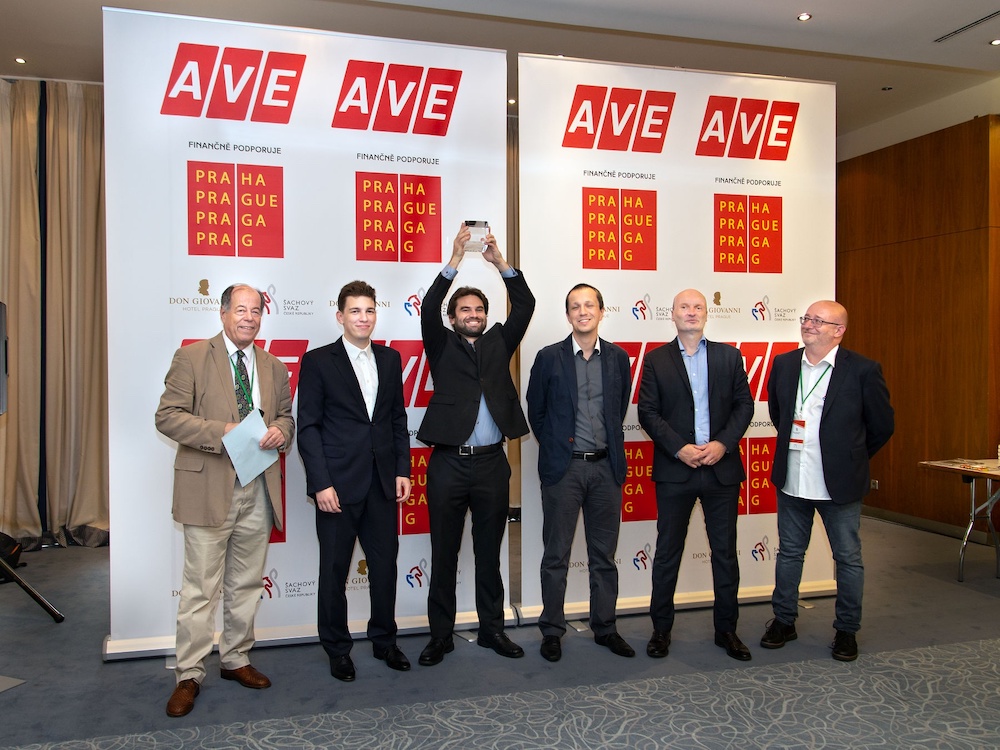 You can replay all the games from the Prague Masters using the selector below.

When we last reported on the Prague Masters after four rounds, the focus was on Sam Shankland having beaten Jan-Krzysztof Duda and David Navara to reenter the 2700 club for the first time since 2019. Sam was co-leading the tournament with Azerbaijan’s Nijat Abasov, who he then played in Round 5.

Sam left Nijat with an isolated c-pawn by move 15 and then slowly circled the pawn before picking the perfect moment to make a move.

38.b4!? left Abasov with a choice to make. 38…a5! seems to liquidate the whole queenside and steer the game to a draw, but with just 8 seconds left on his clock (Sam had 20 minutes) Nijat didn’t pick the radical option but went for 38…Kg6!?. It wasn’t yet a losing move, but Sam went on to win the c-pawn and all it took was one more inaccuracy for Black’s position to collapse in just a few more moves. 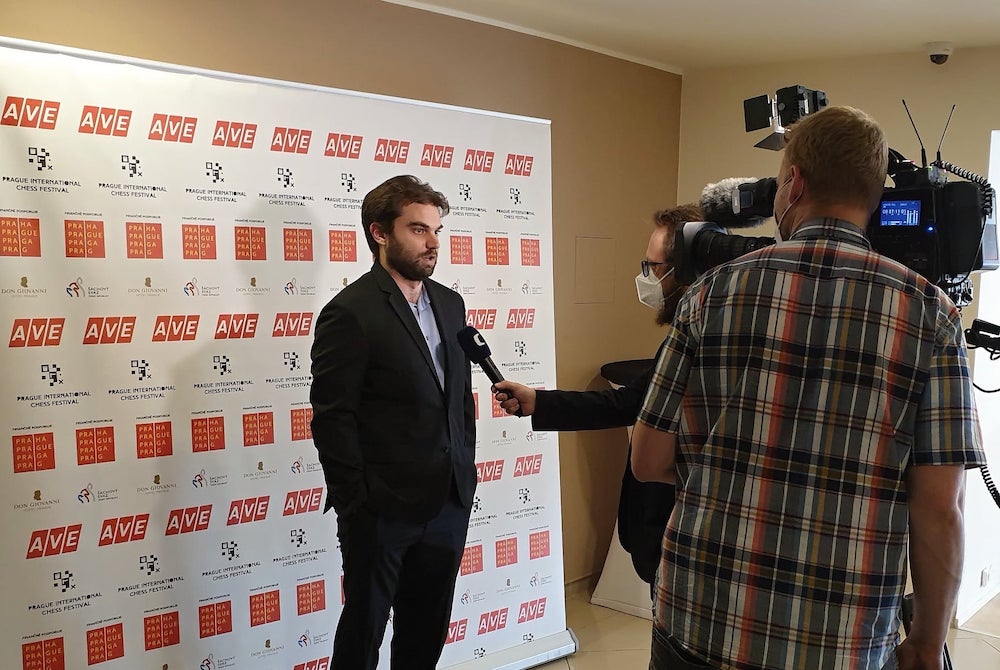 Sam then drew comfortably with Black against Thai Dan Van Nguyen to go into the final round in the lead. 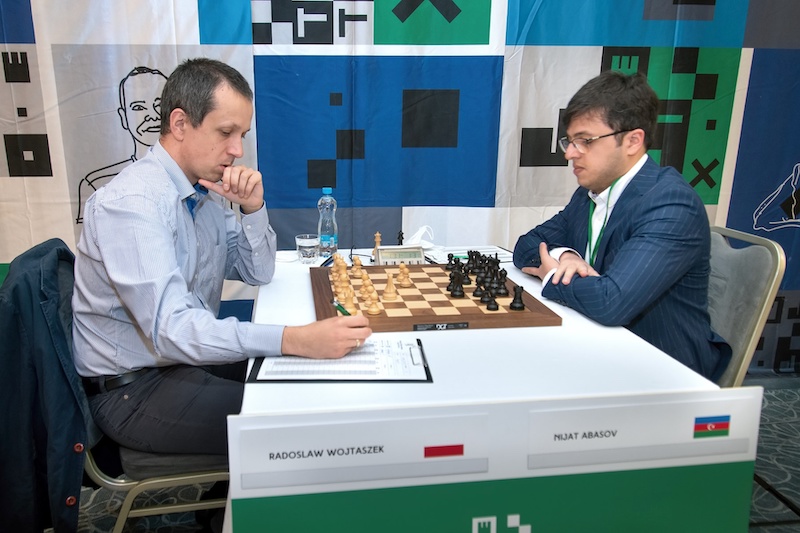 Meanwhile the challenge was coming from the Polish players in the event. Radek Wojtaszek picked up a second win by smoothly outplaying Abasov in Round 6, while Jan-Krzysztof Duda beat Jorden van Foreest in Round 5 before taking down Nils Grandelius in Round 6. That game was a case of living very dangerously after Duda played the French Defence and got into real trouble.

That meant going into the last round both Duda and Wojtaszek were trailing Shankland by just half a point, and to add to the intrigue they were playing each other. The game was a tense strategic battle, until Duda decided to roll the dice on move 30.

Duda had 3 pawns for the piece, but after 34…Ne7! it would be no more than full compensation. Other moves are also good for Black, but here Wojtaszek cracked and played the losing 34…Nxd4? There wasn’t long to contemplate the blunder, since after 35.Nxd4 Qxd4 36.Qh6+! Kg8 37.Re8+! it was mate-in-3.

That clash won Duda a 3rd game of the day prize!

At that moment it looked certain we were going to have a blitz playoff for 1st place, since Jorden van Foreest was contemplating the following position against Sam Shankland.

…but after 46.Qf7! there was no avoiding a lost ending. Sam Shankland calmly clinched tournament victory.

Duda had missed out at the very end, but had also gained over 9 points to climb above Harikrishna, Veselin Topalov and Hikaru Nakamura and return to the Top 20. He wrote on Facebook (in Polish):

I’m glad that the organisers in Prague managed to put on this festival. I’d really like to thank Petr Boleslav and the whole team working on this great event.

I was curious myself how I’d play, since after the tournament in Wijk aan Zee I hadn’t played a classical game. And in the end I’m satisfied, because I won four games and overall played a good tournament.

I’d like to congratulate Sam Shankland on his victory - he played better than all of us and reminded us that he’s a top class player.

The tournament was important for me, but I also wanted to try out some new things in my repertoire, so at times I took risks.

I’d really like to thank Grandmaster Kamil Miton, who “forced” me to return to playing 1.e4, but also because he worked whole days and nights on analysing my opponents.

On [Saturday] the latest internet tournament begins, and on the 5th July I’ll arrive in Zagreb for the Grand Chess Tour, where I’ll have my last chance for some action before the World Cup. And there the people I’ll come up against will include the 13th World Champion Garry Kasparov himself.

I’m really grateful for your support. For me that’s truly important and gives me a few dozen extra Elo in playing strength.

Thank you for Zinzino, Infoszach and chess24.pl for broadcasting in Polish. And also to all the commentators.

See you already on [Saturday], when the Goldmoney Asian Rapid preliminaries begin.

Radek Wojtaszek finished 3rd, but the surprise of the event was the struggles of the illustrious trio of Nils Grandelius, Jorden van Foreest and David Navara, who failed to win a game, though at least David ended with three draws after starting with four losses. 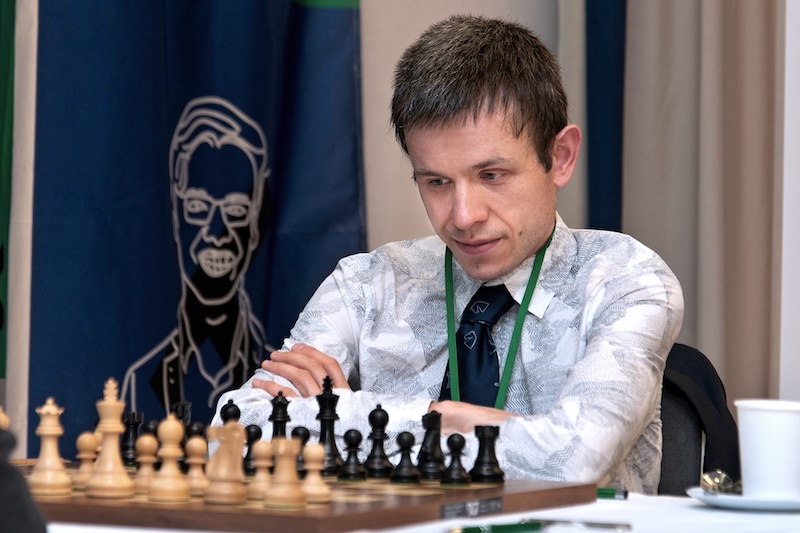