2018 US Chess Champion Sam Shankland co-leads the Prague Masters on 3/4 with Azerbaijan’s Nijat Abasov after defeating Jan-Krzysztof Duda and David Navara. The wins took Sam back above 2700 on the live rating list for the first time since October 2019. Jorden van Foreest has dipped under 2700 with four draws so far, but the player to really suffer in Prague is local hero Navara. He’s been unrecognisable as he’s sunk to four defeats in a row, dropping 20 rating points. 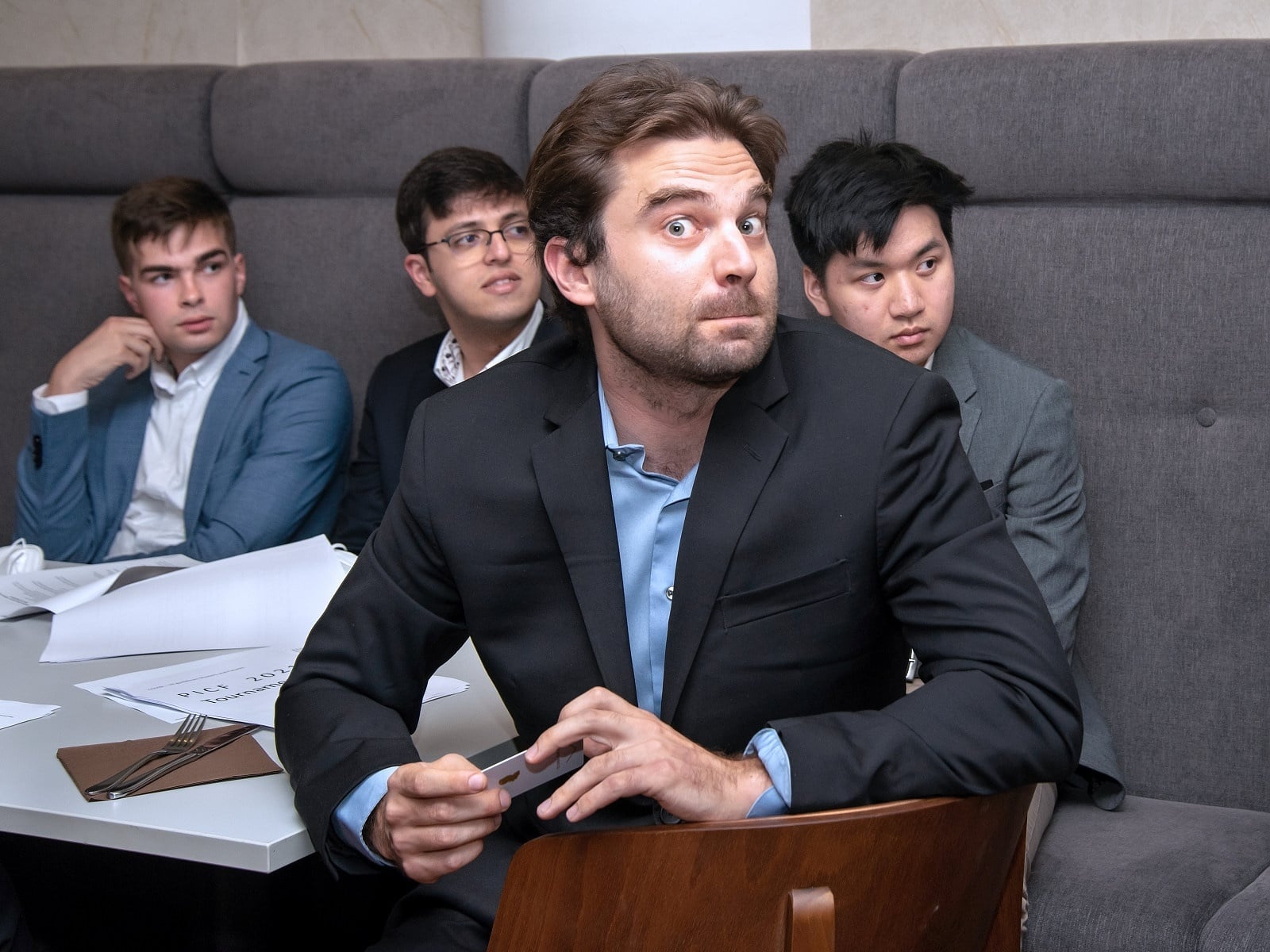 The 2020 Prague Masters was one of the last major chess events to finish before the pandemic stopped over-the-board activity, with Alireza Firouzja winning a first super-tournament after a dramatic late collapse by Vidit. That was a 10-player event accompanied by a 10-player Challengers tournament (won by Jorden van Foreest).

In 2021 the event at first had to be postponed, and it’s an achievement to put on a major tournament at all. The Masters is now an 8-player, 7-round sprint, while there’s no Challengers this year - though there is a Futures and even an Open tournament. We don’t have a live stream (except by chess24 Poland), regular photographs or interviews with the players, but it’s still an impressive line-up, including the Polish, Czech and Swedish no. 1s. 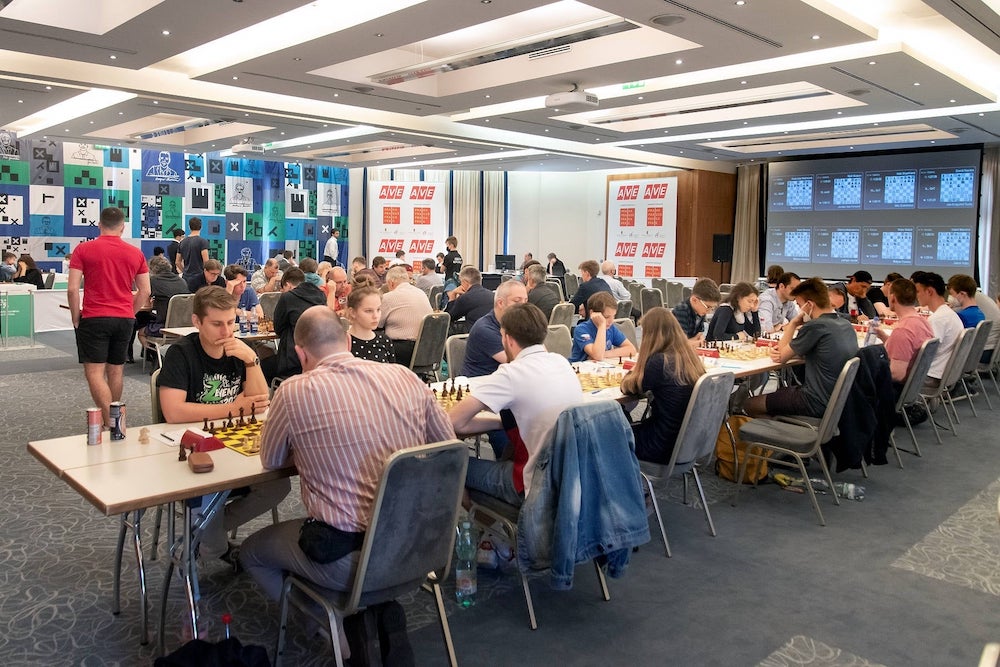 Open tournaments are back! The event is played in the Don Giovanni Hotel in Prague | photo: official website

You can replay all the games using the selector below.

After four rounds there have been two major stories, one positive and the other sad. Let’s start on a high note, with Sam Shankland.

…and he stayed true to his word.

In his first game of classical chess after the long break he held a tricky position against Nils Grandelius without too much trouble, before in Round 2 he took down the early leader, Polish no. 1 and top seed Jan-Krzysztof Duda. Sam’s 6.f3 in the Najdorf saw Duda already take a long think.

A curiosity is that until 16…axb3 they were following a game where Duda had beaten his Polish rival Radek Wojtaszek, on the other side of the board!

Back then Duda played 17.exf7+, but the computer much prefers Sam’s 17.cxb3! In fact in just a few moves, with the game not having left “theory”, Black seemed to be in deep trouble, with Duda’s pawn break 19…d5!? doing nothing to ease the pressure on his position.

Sam’s conversion looks to have been close to perfection as he stored a totally crushing victory, ending with the mother of all forks.

Things just got better for the US star, since in the next round he was on top in a dozen moves with Black against David Navara and cruised to a totally convincing win in 34 moves. He was back in the 2700 club on the live rating list!

Sam, who has written books on pawn play and how pawns can’t move backwards, then got a pawn all the way to c2 right out of the opening in Round 4 against Radek Wojtaszek.

The game fizzled out soon after that, however, ending in a draw by repetition on move 24. The draw was enough to keep Sam in the 2700 club, though of course it remains to be seen where he ends when the tournament is over.

So far so good for Sam

David Navara is many people’s favourite chess player, but he’s suffered more than most when playing on home ground. His annual Prague matches, for instance, have seen him fall to far more defeats against top players than rating alone would suggest. This time round he was also coming into the tournament with almost no competitive chess since the pandemic struck. 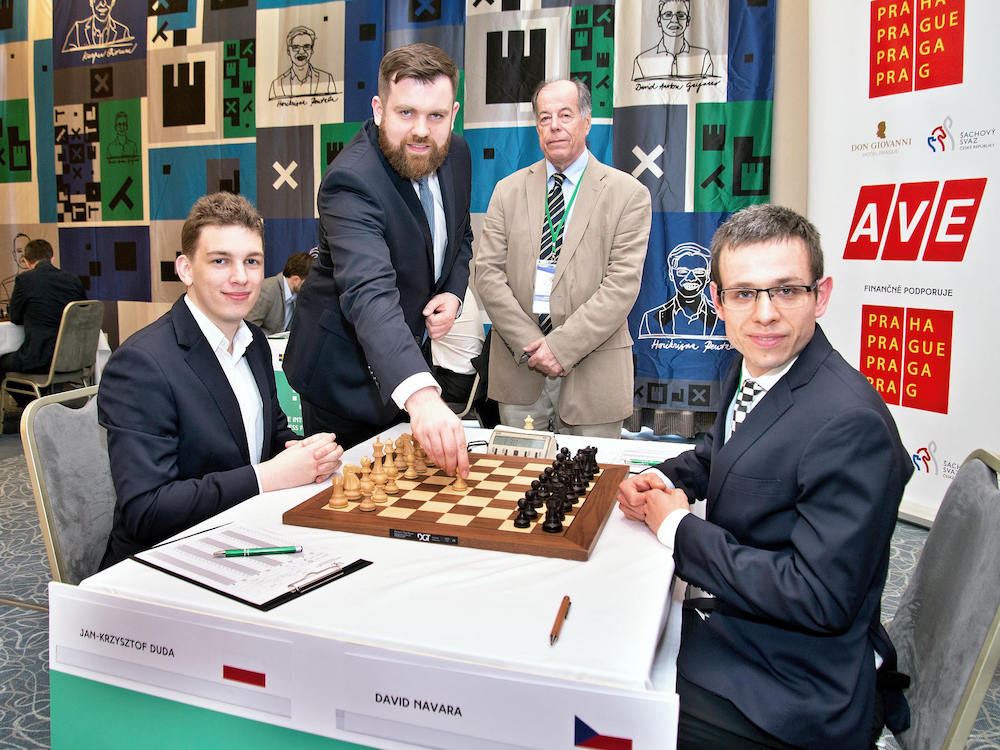 Nevertheless, no-one could have predicted the collapse we’ve seen so far. It’s not just that David has lost all four games, but that the first three were completely one-way traffic, starting with Jan-Krzysztof Duda smoothly outplaying David in an Anti-Berlin in the first round.

There was a Navara touch as the Czech no. 1 graciously allowed mate on the board.

Of course to lose to players of the calibre of Duda, and then Wojtaszek and Shankland, is something that can happen to anyone, but the 4th game, against Azerbaijan’s Nijat Abasov, was the most painful yet. After 18…dxc4? Nijat had the chance to win in style.

19.Nxf7! Kxf7 20.Qxe6+ Kf8 was a great start, but it turns out first playing 21.Rad1! was the only winning move. The immediate 21.Bd6+? Rxd6! let Navara back in the game, and it looked as though there was finally going to be light at the end of the tunnel for the Czech star. Alas, he lost his way and then, in an equal position, he managed to lose on time. 26-year-old Abasov co-leads the tournament after also taking down Nils Grandelius.

So it’s a been a painful event so far for David, but there’s still some time to mount a recovery. Other star names have also had a hard time, with Nils Grandelius on -1, while Tata Steel Masters winner Jorden van Foreest has slipped out of the 2700 club with four draws. It could have been worse, however, since he was losing against another player with four draws, 19-year-old Czech star Thai Dai Van Nguyen.

For now, it’s Sam Shankland and Nijat Abasov leading the race with three rounds to go.

You can watch the Prague Masters each day from 15:00 CEST here on chess24. And don’t miss the Paris Grand Chess Tour, that’s starting Friday June 18th at 14:00 CEST!