Sam Shankland and David Anton were big name casualties on Day 1 of the San Fermin Banter Blitz Cup as they lost their first round matches to Vahap Sanal and Hans Niemann. It’s going to be Duda-Sadhwani and Sanal-Niemann in the semi-finals of the A Qualifier, which is the first of eight mini-knockout qualifiers. The winners will play an 8-player round-robin for a place either in the Meltwater Champions Chess Tour or the San Fermin final event featuring World Champion Magnus Carlsen playing from Pamplona, Spain. 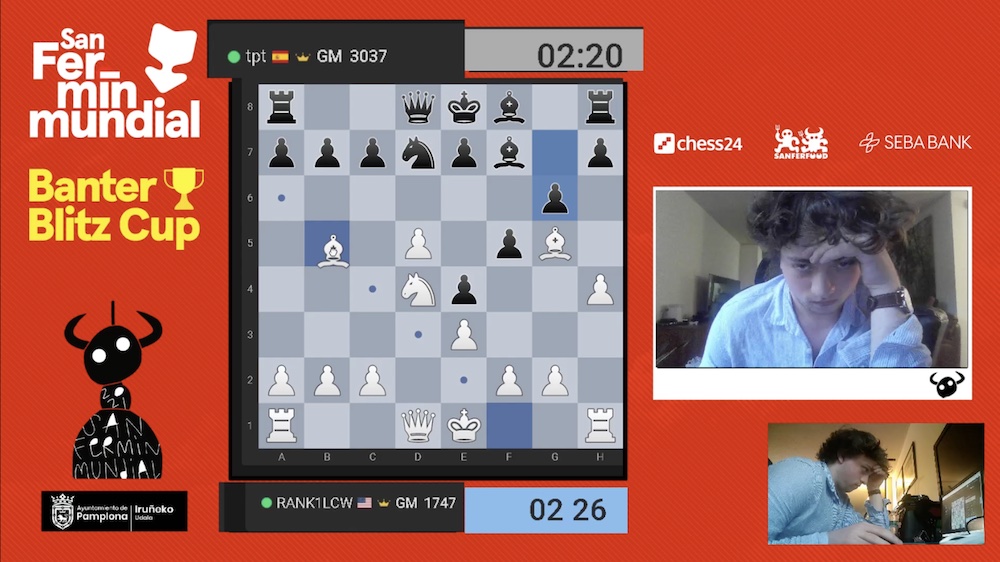 The north-east Spanish city of Pamplona is best known for its annual bull run during the San Fermin festival, but the pandemic has made such mass participation events impossible again this year. Instead the organisers are putting on a series of replacement events, including an 8-player knockout chess tournament, whose four invited players will include World Champion Magnus Carlsen. Although the games are set to be played online, Magnus will be playing from Pamplona. 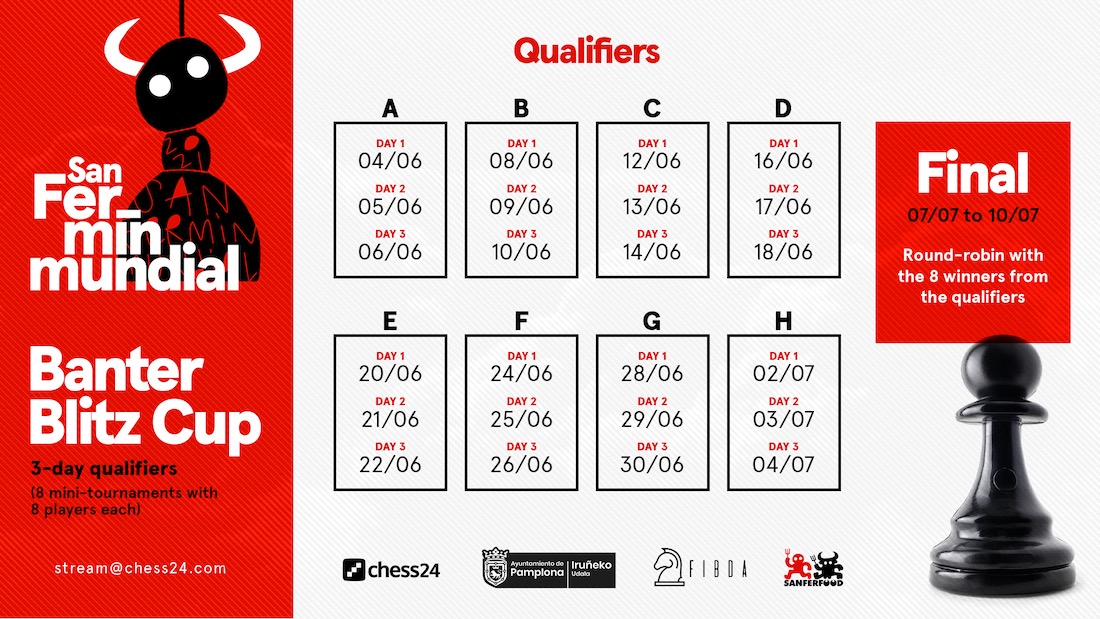 There will also be four qualifiers in the tournament, with one of them coming from the Banter Blitz Cup. That begins with eight 8-player qualifiers, each held over 3 days. The players compete in knockout matches at a 3+2 blitz time control, with each match best of 8 games. That makes 4.5 a winning score, while if the match is tied 4:4 there are two more blitz games played, before finally an Armageddon game.

The eight winners of the qualifiers go forward to a rapid round-robin tournament from 7-10 July, where the winner gets to choose whether to play in the San Fermin event or in one of the legs of the Meltwater Champions Chess Tour. The runner-up will get the remaining spot.

The event kicks off with the A Qualifier (replay all the games here on chess24). 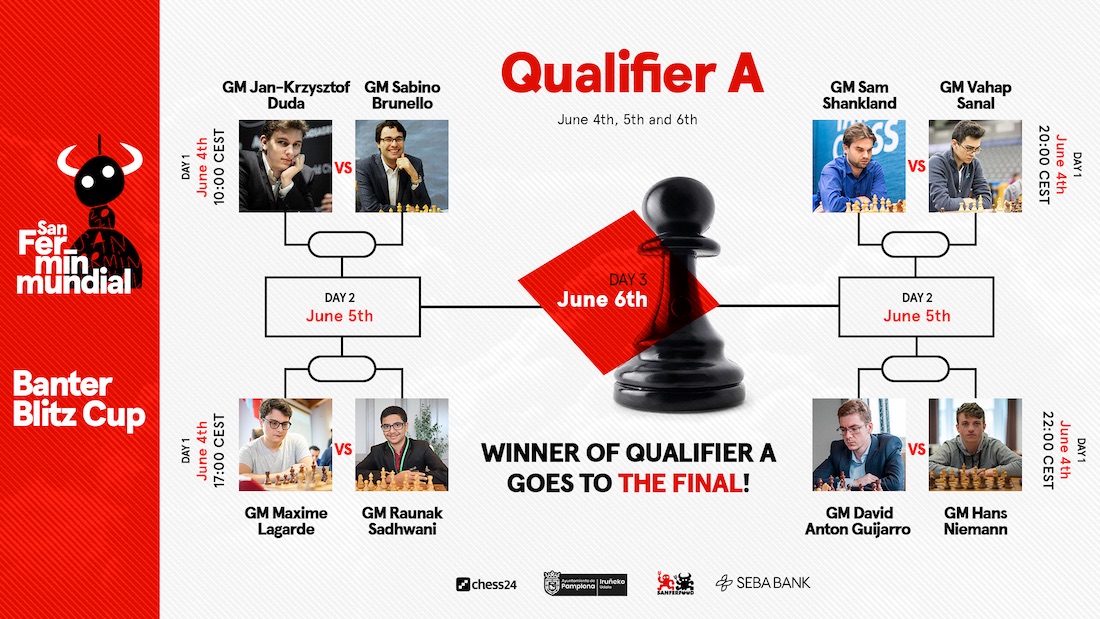 What makes it the Banter Blitz Cup is of course that the players commentate on the action live as they play, and it was an intense first day as all but one of the four matches went the full distance.

The first game, where Sabino went for a little tactic that backfired, summed up the match, with Duda finishing things off with a powerful attack.

The Polish star was lost in a queen endgame in the next game, but managed to escape, and was on top in the remaining games. Sometimes his bold chess had minor tactical flaws, but spotting and exploiting them in blitz chess was much easier said than done.

Duda will play 15-year-old Raunak Sadhwani in the semi-finals. The Indian youngster, who gained the grandmaster title at the age of 13, knocked out reigning French Chess Champion Maxime Lagarde.

It all came down to a dramatic final game, where Raunak played 1.b3 (Adhiban has a lot to answer for!) and got into trouble. Maxime almost found the perfect way to punish his opponent.

Still, it was Black pushing for a win until the very end.

It doesn’t get much more painful than this, as with 44…gxf3?? Maxime must have thought he was winning. He would be, if not for 45.Bf6# and the match was over! 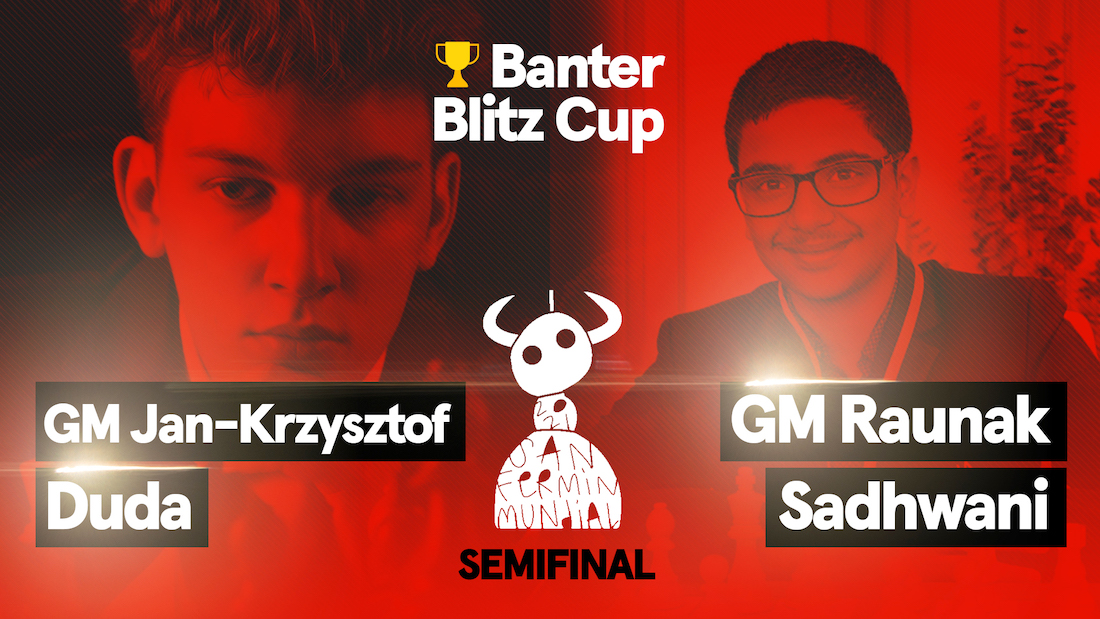 Both matches in the other half of the draw went to Game 8, with the favourites losing.

We could tell 2018 US Champion Sam Shankland vs. 23-year-old Turkish Chess Champion Vahap Sanal was going to be intense from the first game, where Shankland was down a whole rook, then completely winning, before the game ended in a draw.

The players then traded wins, before Vahap took the lead in brutal fashion in Game 5.

In his commentary Sam assessed this position as totally won for White, but in fact it’s only somewhat better after 32.Qxc4 or 32.Nxf6+. Instead he chose 32.Re8+?, but in this case that familiar tactic was losing! After 32…Kg7 33.Qxc4 Sam had seen 33…Rxb2+! but thought he was ok.

He was relying on 34.Qe2, which would be winning if not for 34…Rxe8! Sam saw that move, but too late to have any good alternatives available. Sam played 34.Re2 but it was soon game over.

Shankland felt he was sure to lose the match after a game like that, but he hit straight back with a funny moment in the next game.

Sam was kicking himself here as he spotted 25.Nd1? for his opponent and thought he just had to resign, but in the 46 seconds it took for Vahap to play the move (24.e5! or 25.Nb5! and White was better) he realised that he had 25…Qa4! and, instead of losing a piece, Black wins a pawn.

Sam was close to taking a 4:3 lead in the next game, but instead misplayed an advantage and then blundered into a double attack that was easy to miss given how far apart the pieces were.

Sam came very close to winning the final game on demand to extend the match, but when he realised he was low on time he panicked and began to lose the thread, with Vahap’s counterattack soon taking over. Sam, who’s set to play in the Prague Masters over-the-board tournament from 14 June onwards, was full of praise for his opponent.

I really have to give this guy major props! He was incredibly resourceful - I admire that, he was just so tenacious.

The final match of Day 1 of the Banter Blitz Cup was a thriller between Spanish Champion David Anton and 17-year-old rising US star Hans Niemann.

It started with a game that David was winning before he blundered and allowed Hans to take over. At the end Niemann saw no ghosts and correctly calculated that his own mating attack would be first.

Hans held a tough draw in Game 4, but then David hit back to win games 5 and 6 before an intense 7th game was drawn in 103 moves when Hans attempted to win with Rook + Knight vs. Rook. That meant it all came down to a decider with the scores locked at 3.5:3.5. Hans tried to motivate himself!

The game and match were over in 26 moves. 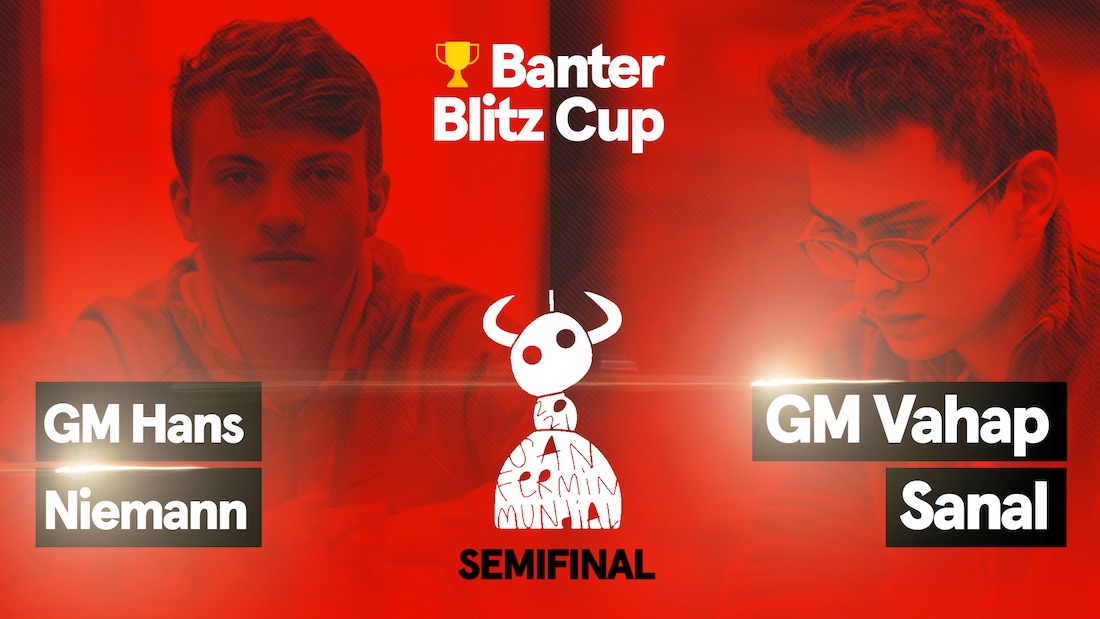 The final will be played on Sunday, Monday is a rest day, and then the B Qualifier starts on Tuesday. That’s going to be the rhythm for the next month, and though we won’t be able to report too regularly on the action you can watch it all here on chess24!

That’s of course not all the chess action, since the Superbet Chess Classic starts at 14:00 CEST, while at 15:00 CEST on Thursday 10 June we have the kick-off of the Gelfand Challenge!