Shamkir, Rd 2: Carlsen does it again

World Champion Magnus Carlsen scored yet another victory over Hikaru Nakamura to push his lifetime record to an incredible 9 classical wins and no losses against the American star. In Round 2 in Shamkir the Norwegian applied steady pressure from the opening until his opponent finally cracked. The other two games were again drawn, leaving Carlsen a full point ahead after only two rounds.

chess24’s live commentary on the round featured the inimitable Peter Svidler, who was joined by Jan Gustafsson on his return from Thailand. You can rewatch the show below:

Magnus Carlsen outplayed Hikaru Nakamura in a slow positional game which, as we’ll see, could have been made much more difficult by a slip on move 32: 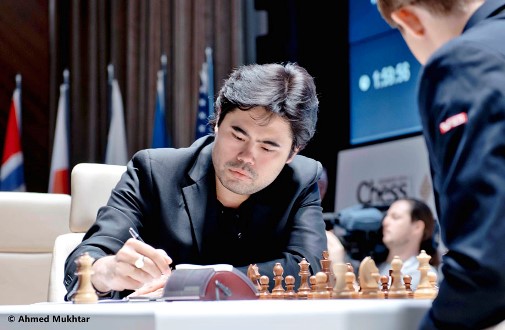 Of course 1...d5 isn't objectively a dubious move, but knowing Nakamura it's hard to understand. I think Hikaru should have gone for the more aggressive options that have given him good results in the past, such as the King's Indian or the Leningrad, rather than the solid Slav. Why put Magnus in his element from the very start? Nakamura has of course thought much more about this than I have, but I'm not convinced by the type of position he allowed his opponent to get so easily in the game.

6. ♗d3 could be met by exchanging on d3 or by Bg6. Given what happened in the game it may have been the latter that bothered Magnus.

6... h6 Once again delaying e6 so as not to permit Nh4. The h7-square has now been reserved for the bishop.

7. ♗d3⁉ Losing a tempo, but aiming to prevent Bg6... Ok, the pawn is better on h6 than h7, but it makes little difference to the position.

7... ♗xd3 8. ♕xd3 e6 9. 0-0 ♗b4 In this variation the e4-square is the point around which Black wants to base all his resistance, so exchanging the bishop for the knight makes sense.

11. ♘xd5 no longer offers an advantage since 11... ♘xd5 defends the bishop, and after 12. cxd5 ♗xd2 neither of the captures on c6 or e6 offers any advantage. This line is important for an understanding of Black's next move.

12. ♗xc3 ♘bd7 13. b3 Giving the white bishop the b2-square. Although the bishop seems just to be biting on the granite of d4 it plays a very important role discouraging Black from breaking with c5 or e5.

13... ♕e7 14. ♖ac1 ♖ac8 15. ♕e2! A move typical of Magnus. The game is developing at a slow pace with no contact between the pieces - conditions in which he feels like a fish in water. This retreat of the queen to e2 anticipates possible attacks on the d-file and leaves the d3-square for the white knight.

20. ♗b4 A very flexible move allowing a multitude of plans. The bishop can go to a5 or switch diagonals to e1-h4.

20... ♕c7 21. ♕f3⁉ Once again a very interesting move. The positional threat is to take on d5, when it's impossible to recapture with the e-pawn as f5 would be hanging. Nakamura decides to resolve that issue by altering the pawn structure.

21... dxc4 22. bxc4 It's curious to note that Houdini suggests 22. Bxd6 as an alternative. Carlsen made this move in 37 seconds (as you can see from our live broadcast), suggesting he never seriously considered giving up the bishop. As we mentioned before, it has much more potential than you might imagine.

23... a5 Weak pawns have an awful habit of eventually dropping off against Magnus Carlsen. For instance, the same a5-pawn from Svidler-Carlsen in the 2013 Candidates:

Or how about the a4-pawn from Carlsen-Kramnik in the 2009 London Chess Classic (a reminder of how long Carlsen has been terrorising the chess world!):

24. ♗e1 b6 25. ♕g3! A fine move. The plan has been devised and the white queen plays no part in it. White wants to combine an advance of the central pawns with pressure on the queenside.

27. f3 ♖db8 28. ♖c2 A quiet move once again typical of Carlsen's style. He doesn't take any decisions but maintains flexibility while gradually improving his pieces - the rooks can now double on the most appropriate file.

28... b5 29. ♘c5 bxc4⁈ It's noticeable that Nakamura took only a minute for this move that drastically alters the game and which I believe was in practical terms the decisive error - the black weaknesses multiply.

29... ♘d8 is a passive option, but perhaps the only move. Black threatens b4, making White's reply forced. 30. axb5 cxb5 31. cxb5 ♖xb5 32. ♖a1 and although the a5-pawn is going to suffer a lot Black can try to seek some activity with his knights, putting one on d5 and the other on d6. The technical task of converting White's advantage would pose real difficulties.

30. ♖xc4 ♘d5 31. ♗d2 e5 No doubt the move that Nakamura was relying on when he played 29...bxc4. However, liquidating the centre doesn't solve all his problems.

32. e4? The only move of Carlsen's in the whole game that can be criticised. As we'll see, this allows Black to simplify in a favourable manner.

34. ♖xc6 ♘d8? Played in just 2 seconds and underestimating the activity of the white pieces on the kingside.

35. ♖g6 ♘c4 36. dxe5 ♔h7 37. ♖g4 ♘xe5 38. ♖h4 The most important feature of the position isn't the pawn advantage but the fine coordination of White's pieces, that allows him to attack both the weakness on a5 and the kingside. 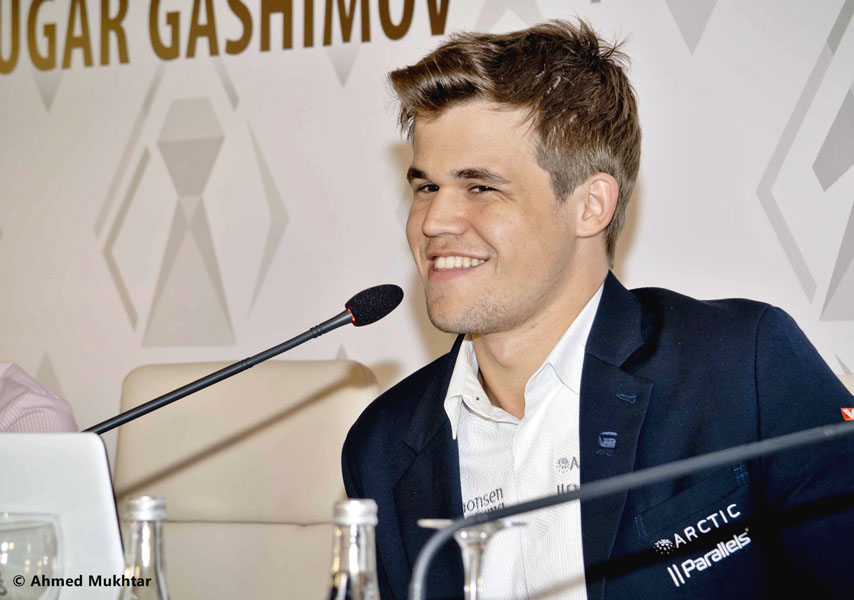 The other games had less to recommend them. Mamedyarov and Radjabov embarked on a long theoretical line of the Meran where all the minor pieces are exchanged in order to reach a very balanced position. Caruana tried to topple the Berlin Wall of Karjakin, but the latter experienced no difficulty holding. So far it's all about Magnus...

In the upcoming two rounds Carlsen will have Black against Karjakin and Caruana, with those games perhaps decisive for whether the Norwegian will run away with the tournament – and mount a real assault on the 2900 ratings barrier! He’s currently only 11 points shy on the live rating list, and over 100 points ahead of Viswanathan Anand in fourth place.

He was preparing hard for the challenge:

Don't miss our live commentary on Round 3 with Peter Svidler and Lawrence Trent! (choose the third flag for chess24 commentary)