Shakhriyar Mamedyarov stumbled into a ferocious attack from Radek Wojtaszek in the penultimate round of Shamkir Chess 2017, but even after that loss he still leads by half a point going into the final round. He has the white pieces against Veselin Topalov, and since one of the players in that game will reach at least 5.5 points the only other player in with a chance of the title is Wesley So. Russia’s Sergey Karjakin and Vladimir Kramnik nevertheless improved their mood with wins over Pavel Eljanov and Mickey Adams. 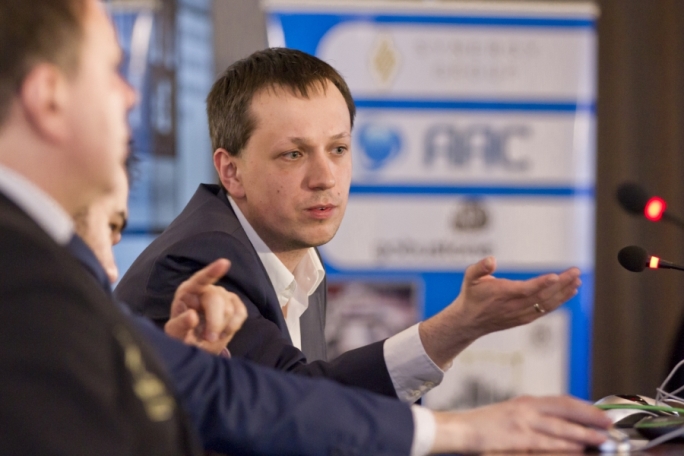 Wojtaszek showed fine preparation and then found all the right moves to finish off his opponent | photo: official website

You can replay all the games from Shamkir Chess using the selector below:

Round 7: All quiet on the Azerbaijan front

For the first time in the 2017 Gashimov Memorial all games were drawn in Round 7, with chess fans needing to get their amusement, or aesthetic pleasure, where they could:

That was the longest game, while the most tense were Karjakin-Kramnik, where Vladimir Kramnik tried to squeeze something out of a small edge for 48 moves, and Eljanov-So, where Pavel Eljanov stopped Wesley So’s winning streak but might have had a chance for more in the early middlegame. The advantage had already gone when a key moment arose after 33.Rh8:

Is Black in trouble? No! 33…Be5! offered White the h7-pawn with check, but after 34.Rxh7+? Bg7! the rook would be trapped. Instead Eljanov brought the rook back to d8 and a draw was soon agreed.

Round 8: A good and bad day for seconds

Shakhriyar Mamedyarov went into the penultimate round with a one-point lead and the knowledge that a win might well see him retain his title with a round to spare. Perhaps with that in mind, he played sharply with Black against Radek Wojtaszek, only for the Polish no. 1 to finally show his teeth in Shamkir. 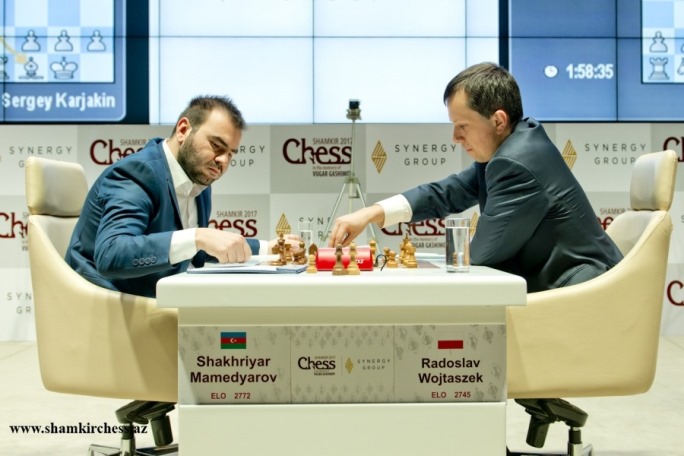 Wojtaszek stopped Mamedyarov's defence of his title from being a walk in the park | photo: official website

Radek pointed out that he knew there was a “crazy” draw starting with 14…Nd7, as played by Emil Sutovsky against Ivan Cheparinov in the 2013 Poikovsky tournament (Emil later went astray and lost): 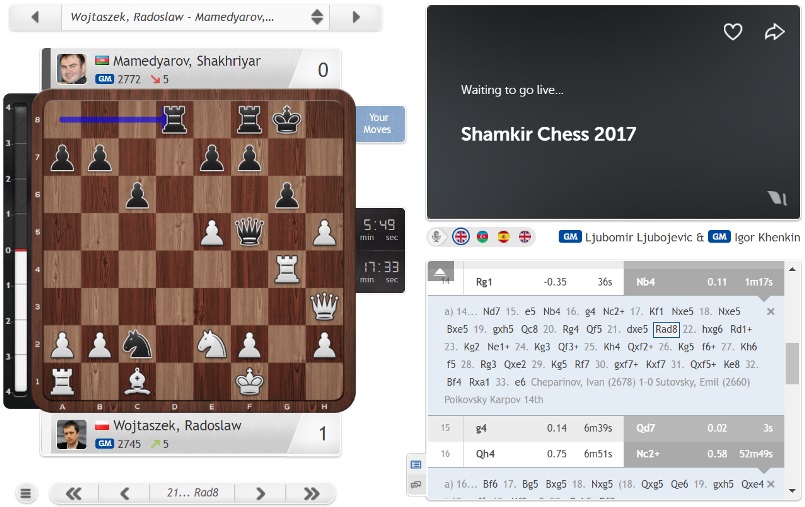 He was surprised by Mamedyarov’s 14…Nb4, but after 15.g4! Qd7 said that although he couldn’t remember exactly how to play he did recall that his friend had told him that any move other than Nd7 should be met by 16.Qh4!

The move surprised Mamedyarov, who sank into almost 53 minutes of bitter reflection. He said his own friend, or rather second, had let him down, since the second had prepared this variation but failed to point out 16.Qh4. Perhaps 16…Bf6 was a better choice than Mamedyarov’s 16…Nc2+, since after 17.Kf1 he spent another 40 minutes choosing between bad options, with play continuing: 17…Nxd4 18.Nexd4 Bxd4 19.gxh5 Bf6 20.Bg5 Bxb2 21.Re1 Qd3+ 22.Kg2 f6

Don't try this with the chess24 app while in motion! :)

24.Nxg5! was just too easy, with Black having to give up material to avoid a quick mate. Wojtaszek didn’t go astray as he notched up his first win of the event.

That slip from Mamedyarov wasn’t fully punished, since second-placed Veselin Topalov and Wesley So failed to win their games. Wesley came closest, but he couldn’t convert an extra pawn in a same-coloured bishop ending against Teimour Radjabov’s tenacious defence. 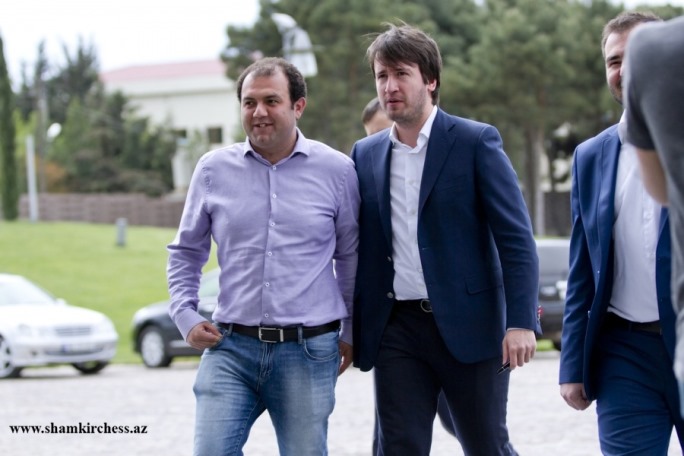 Radjabov, here with Rauf Mamedov, now has seven draws in a row after his Round 1 loss to Eljanov | photo: official website

A good day for Russia

Vladimir Kramnik and Sergey Karjakin lost in unison in Round 6, but in Round 8 they both got back to 50% with wins with the white pieces. Before the day started Mickey Adams was the only player other than Mamedyarov to have gone unbeaten in Shamkir, but he soon found himself on the ropes against Kramnik. In an Italian Game he missed the chance to go for active counterplay, e.g. after 26…d4, and instead allowed Vladimir to gang up on the open b and c-files. 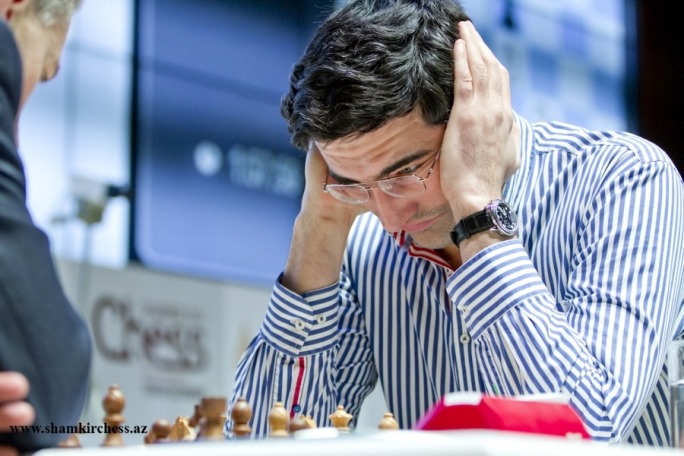 Kramnik put his losses in Rounds 5 and 6 behind him with a vintage display | photo: official website

It was total domination:

39.Ng5+! hxg5 40.hxg5 Nf4+ 41.gxf4 and Mickey Adams stopped the clocks in a position that was mate-in-6. The Englishman cut a disconsolate figure as he waited for Vladimir Kramnik to return to the board. 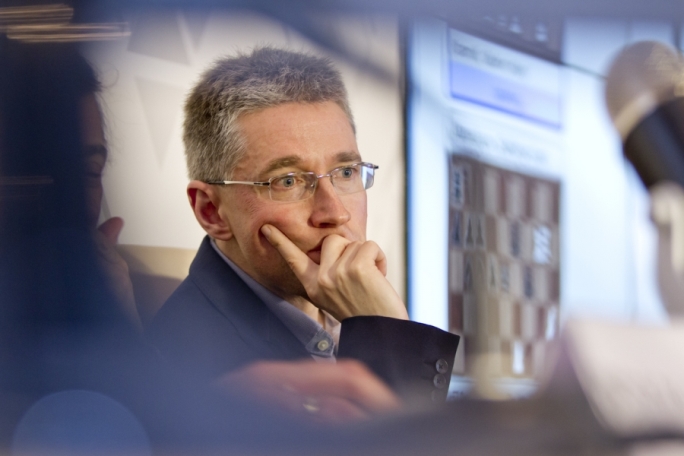 A tough day at the office for Mickey Adams | photo: official website

Sergey Karjakin’s win, meanwhile, was yet another game in which Pavel Eljanov spoiled some excellent work. In a Berlin he deviated on move 13 from a Karjakin-Carlsen draw from the 2013 Tal Memorial, and spent 50 minutes on the next move, correctly calculating a forced line with 14…Qh3 15.Ne4 Bxe4 16.Rxe4 and then: 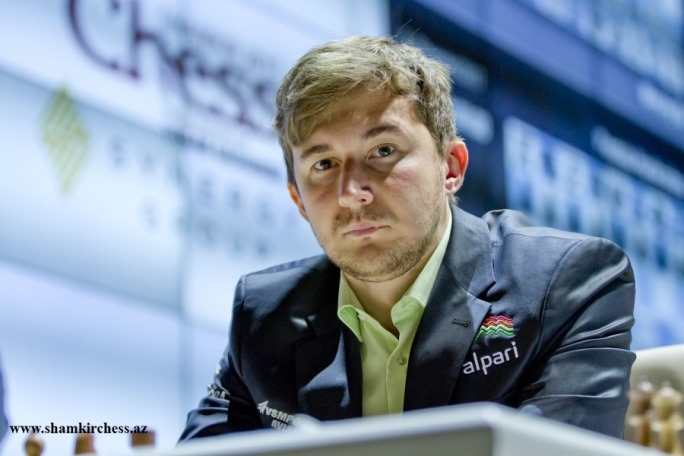 The game should logically have ended in a draw by perpetual check, but Eljanov missed his chance and allowed a bishop pair vs. rook + 2 pawns ending that only White could win. 38.Bd3 signalled the beginning of the end:

Black can’t save the h7-pawn, since 38…h6 would allow an invasion by the white king. There was one flicker of hope for Eljanov in the play that followed, but instead Sergey went on to score a smooth win.

That leaves the standings with one round to go as follows:

As you can see, with Mamedyarov only on +2 there are 6 players within a point of him, but the final round pairings mean only Topalov and So can still stop him winning the title. The pairings that matter for the title in the final round are:

Wesley So must win, in which case he’d face a rapid playoff with Mamedyarov, if that game was drawn, or Topalov, if Topalov wins. If So doesn't win Topalov takes the title with a win while Mamedyarov only needs a draw. If Mamedyarov wins then of course he retains his title regardless of the other result. 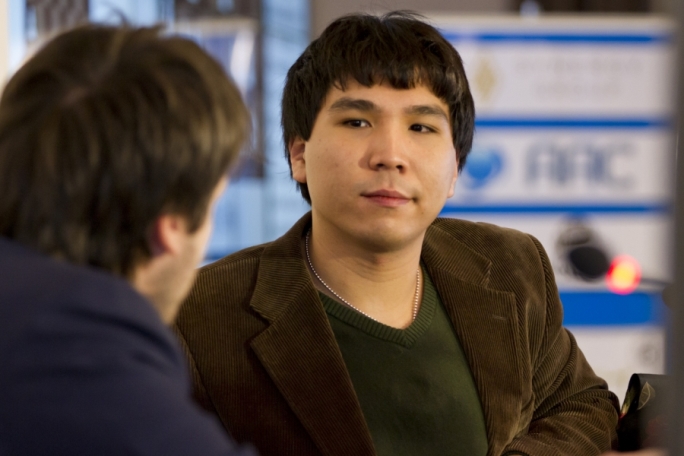 If the 2017 Gashimov Memorial goes to a playoff it'll feature Wesley So | photo: official website

Tune in for all the action with commentary by GMs Igor Khenkin and Ljubomir Ljubojevic (or web cams of the board of your choosing) from one hour earlier, or 12:00 CEST on Sunday. You can also watch in our free mobile apps: