Shamkir 6: A bad day for Russia

Just three days ago Russian ex-World Champion Vladimir Kramnik was ahead of Wesley So in the world no. 2 spot. Now, after losing first to So and now to Shakhriyar Mamedyarov, he trails Wesley by a whopping 14.4 rating points and has dropped below Fabiano Caruana to world no. 4. Wesley, meanwhile, ground another Russian player into dust, making Sergey Karjakin pay a heavy price for entering a worse minor piece ending. Veselin Topalov escaped an opening gone wrong to beat Pavel Eljanov and join So and Adams a full point behind Mamedyarov. 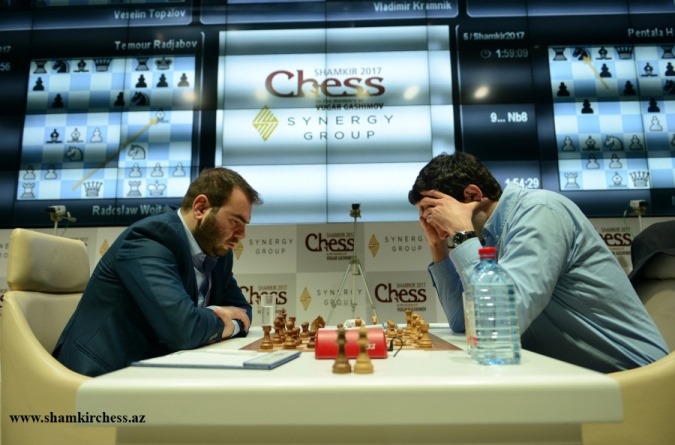 Mamedyarov scored his 3rd win with Black to condemn Kramnik to a 2nd loss in a row | photo: official website

You can replay all the games from the tournament so far using the selector below: 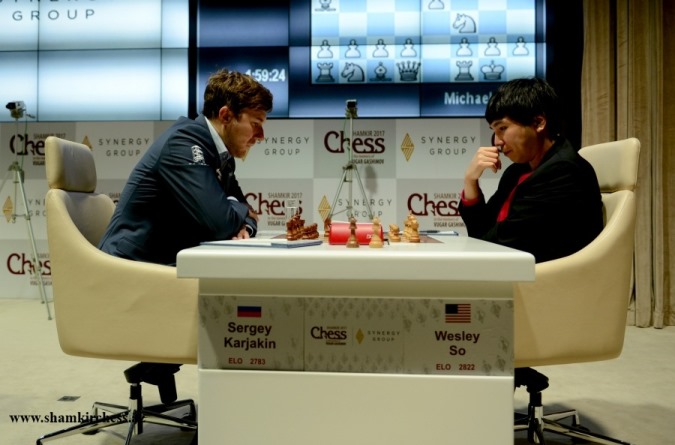 Wesley So is right back on track after his shock first round defeat | photo: official website

Wesley So is suddenly flying again, having followed up beating Kramnik with the scalp of another great Russian K, Sergey Karjakin. Once again he did it by outplaying a player renowned for his technique in a technical ending.

Karjakin went for 27…Rc7?! and said afterwards, “basically I spoilt my position here and then I had to fight for a draw”. After 28.Rxc7 Bxc7 29.Nc5! the position had gone from highly drawish to unpleasant to play for Black, and with time trouble a factor, Wesley managed to win a pawn before move 40. The rest was torture, and although Karjakin may have had a glimmer of hope in the ensuing knight ending, the outcome was the logical one. 61.g5 emphasised White’s domination: 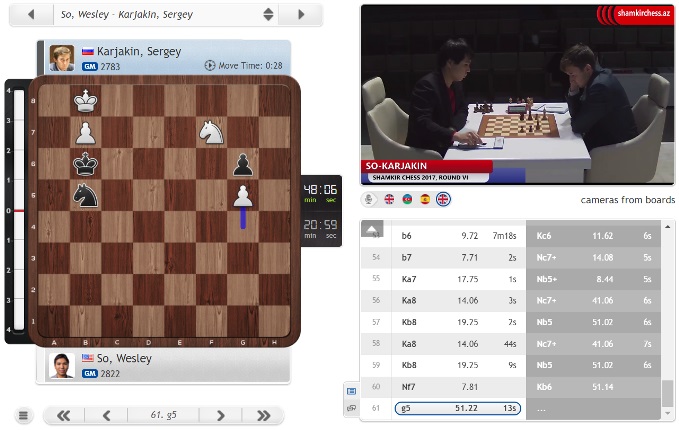 Sergey resigned three moves later in a position where Black’s efforts to stop the b-pawn would make the g-pawn unstoppable. 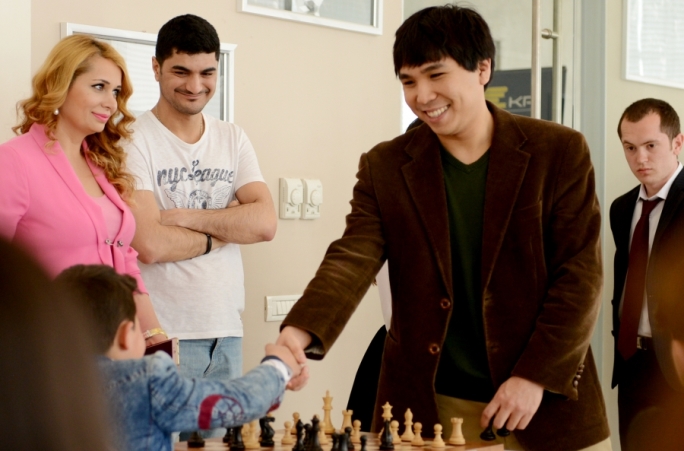 Wesley So was in good spirits at the simul with kids on the rest day | photo: official website

That result proved to have huge significance not just for the tournament but the rating list, since Vladimir Kramnik fell to a second defeat in a row. 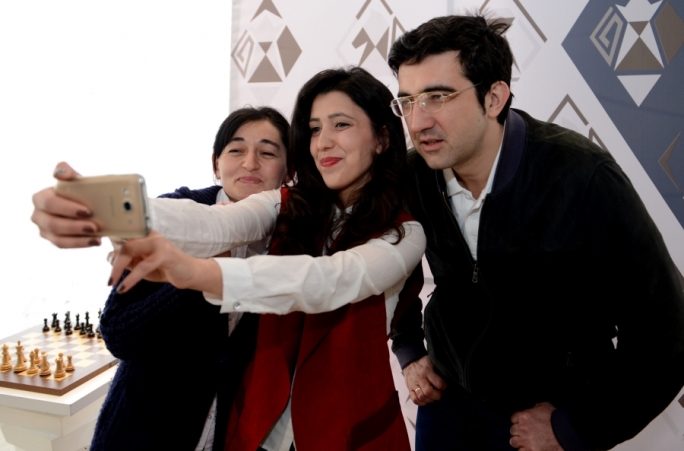 The Russian was excused the press conference as he told the organisers he was feeling ill, but Shakhriyar Mamedyarov implied it might have been more the demoralising effect of what happened on the board. He said Kramnik’s mood got worse and worse after the Russian threw away a big advantage out of the opening.

19.Bb5! was the way to go, pinning the knight with a stable edge, while after 19.Rac1 Nb4 20.Bf1 (20.e6! might have gone some way to justifying White’s play) 20…f4 21.e6 Bxe6 22.Ne5 White could still claim to have a comfortable position, but the advantage had gone. The knight that could have been eliminated would go on to be a thorn in White’s side for the remainder of the game. 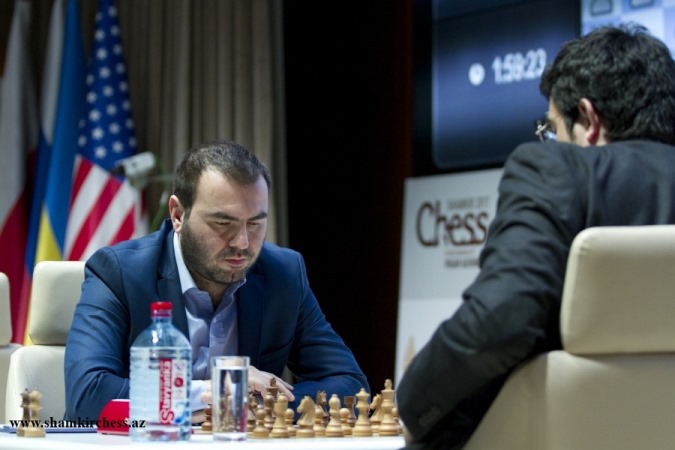 Mamedyarov is chasing a 2nd Shamkir title in a row | photo: official website

In hindsight Kramnik should probably have checked whether his opponent was happy to draw by repetition on move 30, although Mamedyarov said afterwards that he still saw no way to play for a win until Kramnik went for 41.h5?!

That gave up a pawn to 41…Bg4 42.Nh4 Bxh5, with Mamedyarov explaining that Kramnik must have missed that his intended 43.Bh3 would run into 43…g5! (43…Nd3! also ends White’s fun). From that point onwards the play got more and more murky, and though for a while Kramnik seemed to manage to consolidate, he then decided to go for a pawn race that was more a crowd pleaser than an effective defence. Shakhriyar admitted there were chances for him to lose, but in the end the side with two pawns ready to queen beat the side with only one!

Play continued 62.Ra6 d1=Q 63.Nxd1 Bxd1 64.Ra8+ Kg7 65.Bxd1 Rb1 66.Rxa2 Rxd1 and Mamedyarov was up a piece. That meant Mamedyarov stretched his lead to a full point over the field, after the Azeri no. 1, renowned for his play with the white pieces, has now won three games with Black in Shamkir. Kramnik, meanwhile, will be very keen to avoid another of the late tournament collapses that we’ve seen from him on numerous occasions in the latter part of his career. 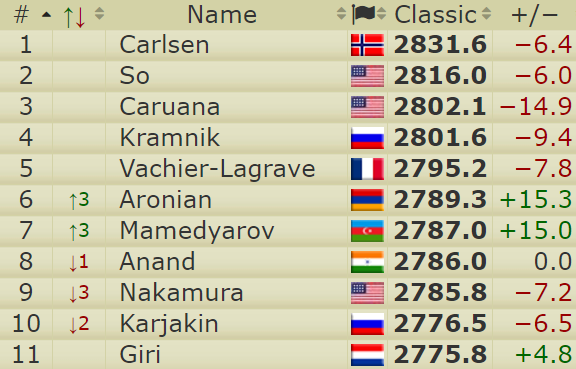 In two rounds Kramnik has slumped from world no. 2 to world no. 4, almost 15 points adrift of Wesley. Mamedyarov, meanwhile, is also on the rise | source: 2700chess

Kramnik has Black against Karjakin in Round 7, which is probably not what the doctor ordered! 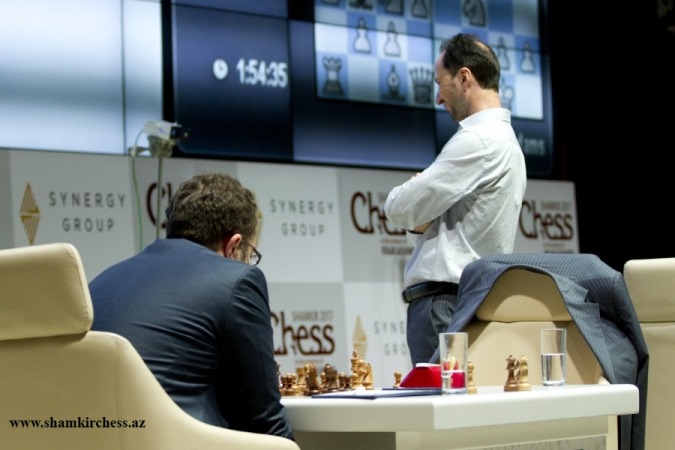 Eljanov must feel he could, and perhaps should, be leading Shamkir Chess at this point | photo: official website

The final decisive game saw Veselin Topalov leapfrog Pavel Eljanov into second place after another game where winning the opening battle counted for nothing. Veselin had been brutally punished for failing to castle when he had the chance in the previous round against Karjakin, and he tempted fate by doing the same again.

Topalov went for 18.Bf1?! to prevent b5, but confessed it was “just a bad move”. Although later Veselin did manage to castle, he failed to prevent b5 and came under a withering attack:

34…Bxh4! It was a strange case, however, where despite making a fine visual impression the attack had no obvious follow up. After 35.Rd5 Eljanov’s 35…f3?! simply closed the kingside after it was sidestepped by 36.Qd3!, but it was far from clear what else Black should have done (the computer suggests waiting moves). Things went from bad to worse for Eljanov when he took an impulsive decision in time trouble:

40…Rxb6?! White was a full exchange up after 41.cxb6 Rxb6 42.Rxe5 and although Topalov confessed to “blundering” 42…Bh4 for the second time in the game there was again no killer blow. In fact it seems both players were wrong to have considered 43.Qc3 an only move. Eljanov resigned on move 60 with his position in ruins. 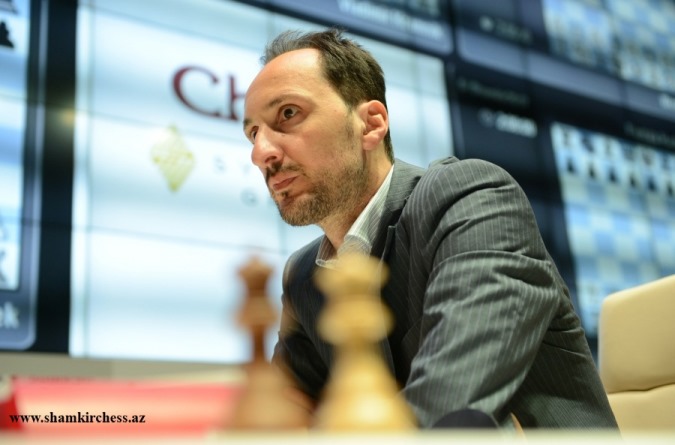 Topalov is a point behind Mamedyarov and plays him in the final round | photo: official website

There were draws in the Wojtaszek-Radjabov and Adams-Harikrishna games, with the latter of significance for the standings at the top. Mickey Adams is the only unbeaten player apart from Mamedyarov and plays the Azeri no. 1 in the next round. He’s in the 3-player group a point behind the leader:

Apart from the two games we mentioned – Karjakin-Kramnik and Mamedyarov-Adams – Eljanov-So and Radjabov-Topalov will also be important in the race for first place. Harikrishna-Wojtszek, meanwhile, is a contest between two players who have yet to shine in Shamkir. 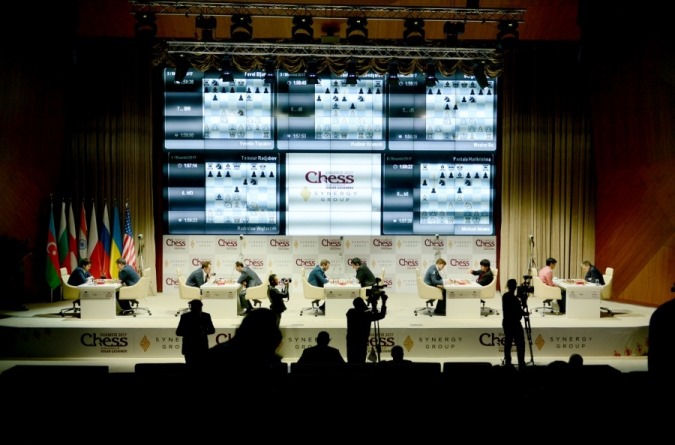 Three rounds to go in Shamkir, though if players are tied for first we may again get a playoff | photo: official website

Tune in for all the action with commentary by GMs Igor Khenkin and Ljubomir Ljubojevic (or web cams of the board of your choosing) from 13:00 CEST each day. You can also watch in our free mobile apps: