Shakhriyar Mamedyarov won a lost position against Pavel Eljanov in Round 3 of the Gashimov Memorial to snatch the lead, and has held on to it ever since. Vladimir Kramnik won a great game against Harikrishna with a rook sacrifice that was two parts desperation, three parts genius, but then the very next day lost both a game and the world no. 2 spot to Wesley So. Both those games are analysed by Jan Gustafsson, while Pepe Cuenca takes us through a brilliant win for Sergey Karjakin over Veselin Topalov. 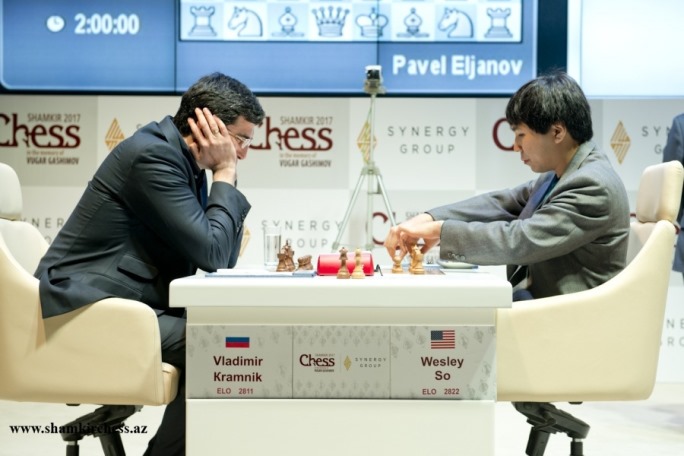 Wesley So got a crucial win to retake the world no. 2 spot against Vladimir Kramnik | photo: official website

You can play through all the games from the Gashimov Memorial in Shamkir using the selector below, or hover over a player’s name to see his results so far:

When we last reported on Shamkir Chess, Pavel Eljanov had raced to a 2/2 lead, and in Round 3 it seemed he’d continue that run and spoil the fine start of defending champion Shakhriyar Mamedyarov. 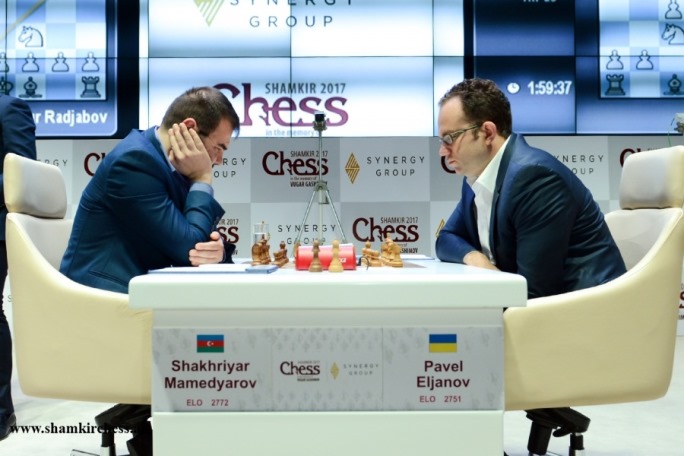 Pavel was pressing hard and was within touching distance of victory when his opponent played 43…Rf5?!

As Shak explained himself after the game, Eljanov could have ignored that move with 44.e7! and after 44…Rxd5 45. e8=Q both Black’s rook and c8-bishop are under attack. Relatively best for Black is 45…Rf5, but then after the simple 46.Qxc8 White is a piece up and should be able to consolidate and win the game.

Instead after 44.Re5? Mamedyarov got the chance to play 44…Qh3! and suddenly there was nothing better than perpetual check for White. There were shades of Caruana-Aronian from the last round of the GRENKE Chess Classic, but this time the tables fully turned. Mamedyarov avoided a repetition and tortured White with his bishop pair until Eljanov finally threw in the towel on move 66. 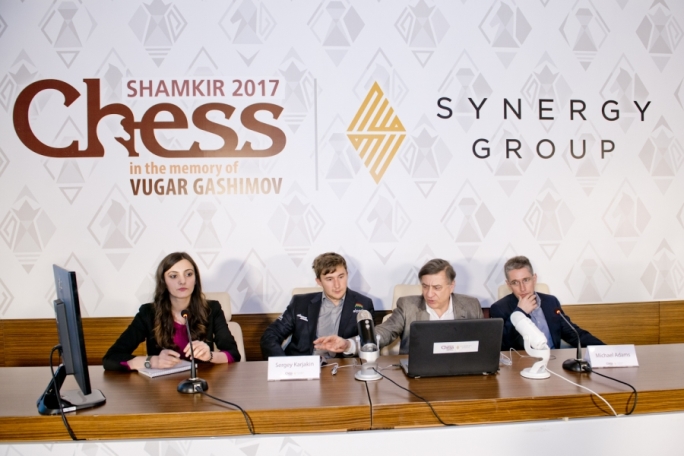 39…Rxf1+! was a move worthy of winning the game, and Sergey resigned immediately, [correction: as Eyal01 notes in the comments, it seems Karjakin lost on time] but it wasn’t as simple as we, or Sergey, might imagine! 40.Kxf1 Qc4+ at a very quick glance seems to fork the rook and king and win a piece. Sergey no doubt spotted instantly that White can respond 41.Re2, before seeing that 41…Nd2+ does force the win of a piece, since 42.Ke1 runs into mate: 42…Qc1# That means White has to give up the rook with 41.Kg2 Qxe2, but that’s far from the end of the story! 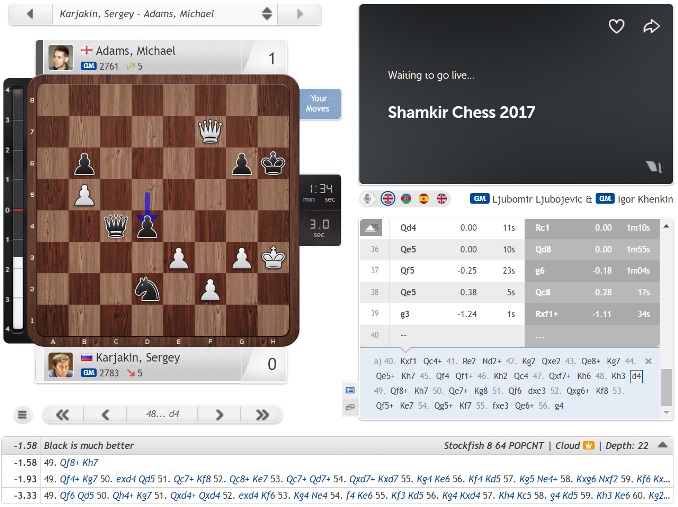 The game could have gone on... and on!

Black would have had to give up the f7-pawn, and probably later the g6-pawn, with check in order to continue playing for a win. Karjakin missed the chance to make one forced move and consider his options after the time control.

Two players who weren’t going to miss any attempt to torture the other were Veselin Topalov and Vladimir Kramnik, who were playing their 63rd classical game. Although queens left the board on move 13 it was a fiercely contested dynamic struggle, with a draw a fair result. 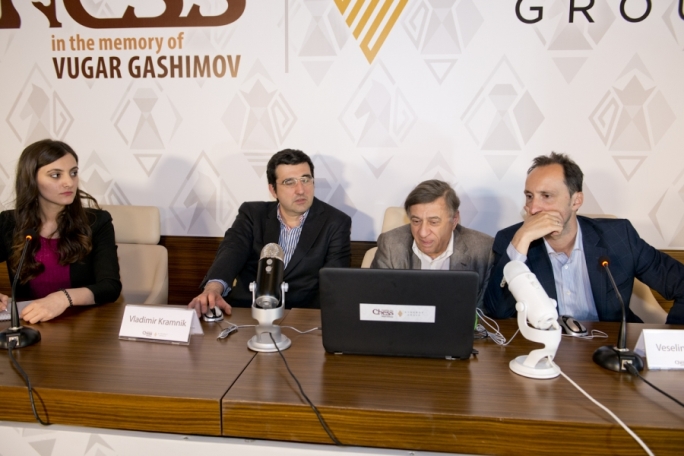 Ljubo (Serbian Grandmaster Ljubomir Ljubojevic) managed to get both Vlad and Veselin to talk about the game... and asked them what would happen if their children fell in love! Neither would stand in their child's way, though Topalov did mention that there are love affairs even between Israelis and Palestinians... | photo: official website

Round 4: Kramnik brings the house down

Round 4 was a peaceful affair, on the whole, with Mamedyarov-Radjabov one of the most predictable draws in world chess. In fact, Mamedyarov has had an easy time of it so far in his home supertournament, since you also didn’t need to be Nostradamus to predict his Round 2 draw against his good friend and sometime boss Karjakin. 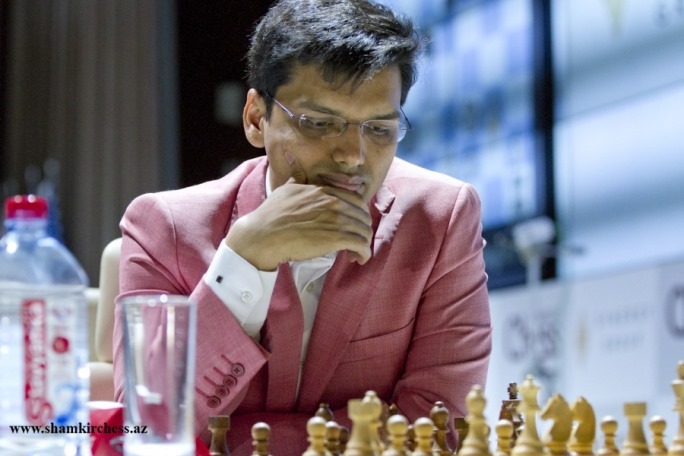 Harikrishna's pink suit wasn't the only questionable decision he made against Kramnik | photo: official website

One game made up for all that, though, with Big Vlad turning a struggle that was going rapidly downhill for him into a modern sacrificial masterpiece. Grandmaster Jan Gustafsson takes us through the game:

Round 5: Wesley and Sergey hit back

That result had seen Vladimir overtake Wesley So for a second time in the tournament to become world no. 2 on the live rating list, but he didn’t get to bask in the glory for long. In Round 5 he had the black pieces against Wesley, and was methodically outplayed by the young star.

Once again, Jan has the lowdown on that encounter:

That was Wesley’s first win of the event, and in the same round Sergey Karjakin also got off the mark. Seldom has anyone been punished as brutally for failing to castle as Veselin Topalov was in a game that only Grandmaster Pepe Cuenca is fully equipped to describe! 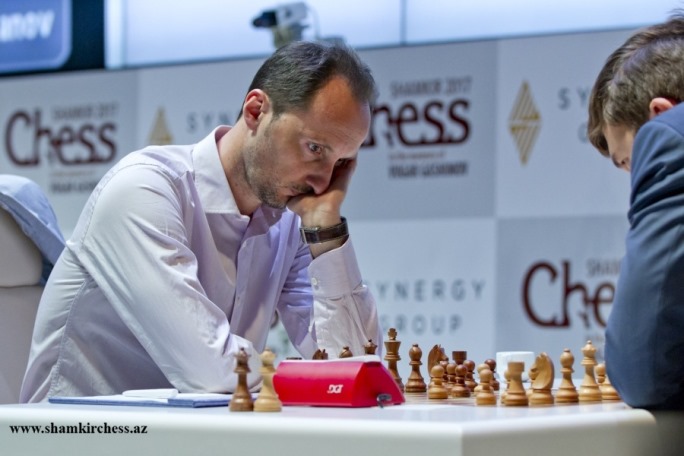 Veselin must have spent a lot of the game wondering what on earth he'd done | photo: official website

Draws for Mamedyarov and Eljanov meant that Shak still leads on +2, Eljanov has +1 and then the rest of the field are on 50% or below:

Action resumes after the only rest day with three huge clashes on Thursday: Kramnik-Mamedyarov, Topalov-Eljanov and So-Karjakin.

Tune in for all the action with commentary by GMs Igor Khenkin and Ljubomir Ljubojevic (or web cams of the board of your choosing) from 13:00 CEST each day. You can also watch in our free mobile apps: