Anish Giri committed the equivalent of chess murder as he flagged the nicest man in chess, David Navara, in Game 1 of the final of the Mr Dodgy Invitational. It was a powerful statement of intent, and David never managed to get into the match, failing to win a game as Giri raced to a 7:2 victory. It’s Anish who will be the proud owner of a signed photo of tournament organiser Mr Dodgy on a horse, at least unless he succeeds in selling it to Peter Svidler. 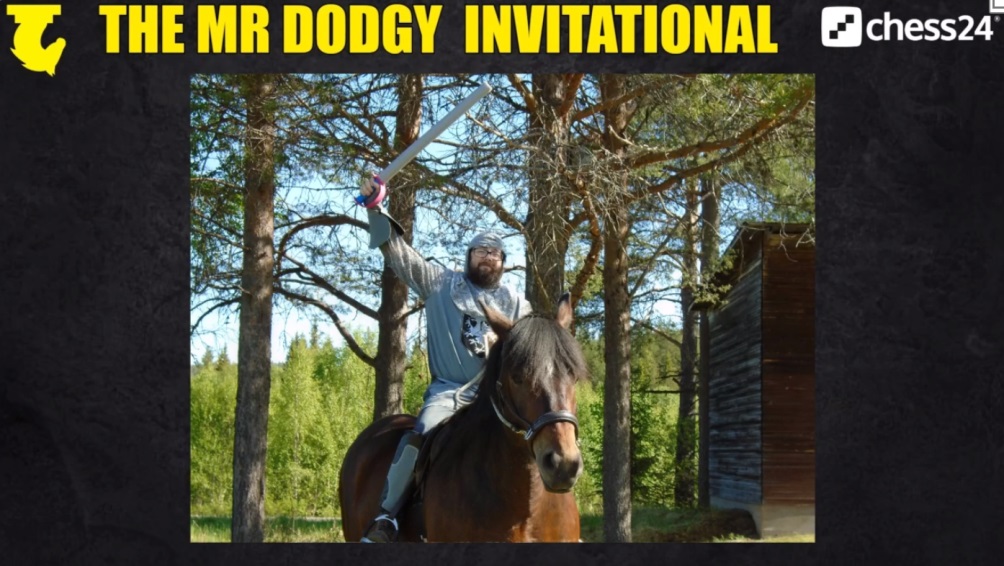 You can replay all the games from the Mr Dodgy Invitational using the selector below (click on a result to open the game with computer analysis):

And here’s Jan Gustafsson’s commentary on the final day, including the final interview with the players:

David Navara won a close match against David Howell and then surprisingly crushed Peter Svidler in the semifinals of the Mr Dodgy Invitational, and the Czech no. 1 also showed dedication away from the chessboard:

Anish Giri won 10 games and lost just 2 as he beat Laurent Fressinet and Anton Korobov, but not for the last time in the tournament he came up with unconvincing excuses for failing to take a photo with a horse. For the final, however, he came through! (click the photo to see it in all its glory)

If that showed how seriously he was taking the match it was nothing compared to the first game. Anish outplayed his opponent to win a pawn, but the position looked destined to end in a draw:

David was behind on the clock, but with exactly 1 minute to 1 minute 11 seconds it was nothing too serious, and he played relatively quickly and confidently. It was to no avail, however, since Anish, who’s been working hard on eliminating any weaknesses in online chess, went on to blitz out his moves like a man possessed and ultimately win on time while still having 37 seconds remaining.

He’d done it against a man who a day previously had offered Peter Svidler a draw in the first game of that match when Peter was down to 1 second to his 23.

Yeah, for the next three games I was mentally justifying myself, trying to find excuses.

A good lawyer would have advised Anish to stay silent, but…

To be frank, first of all the easiest excuse that people can say is that when you are the one with an extra pawn you can do it. The other excuse you can say is that before that it was not so easy if it was a draw, and I simplified into it with an intention to flag. There can be many excuses, but of course I feel it’s part of the game without increment…

Peter Svidler later had to check he’d heard that right:

Peter understood the thought process, but went on…

In my head this is like pre-meditated murder, this is not an excuse…  It makes it much worse, I think!

So you had three different excuses and you didn’t just say, “I wanted to win the picture of the horse”?

It’s definitely nothing personal. I would have done it against absolutely anyone and I would expect anyone to do it against me as well, especially if you have less time.

In this case, however, it was hard to imagine David ever flagging his opponent in a similar situation, with Jan raising the issue of whether adhering to a personal code of chess etiquette was a liability in online chess:

It might become a competitive disadvantage if it becomes the norm to flag in such positions.

And what did David himself think? Well, he admitted it was his fault to lose a pawn, but pushed back when Anish suggested there were some winning chances, and then made a polite statement that you might say for him was the equivalent of Gata Kamsky rage quitting:

I admit you had your right to play for the win. I just was understandably unhappy about the way how the game ended.

Why have we dwelt so long on that moment? Well, partly because it’s genuinely a hot topic in the new world of high stakes online chess, but also because the match from there on was disappointingly one-sided:

Giri was extremely impressive, playing fast but building up advantages in most of the games so that the scoreline could if anything have been more in his favour. There were some memorable moments. For instance:

The best chance for David was in fact in the final game after 30…g6:

Nothing had gone right for the Czech no. 1. When asked if he’d played worse, or Giri better than Svidler the day before, he explained:

Both. With me in blitz much depends on my form, and yesterday I slept well, so it was fine, but today I had a very silly idea to prepare for the match seriously, because I had not prepared seriously for about two months. Ok, I prepared for the European Online Championship, but otherwise I was not studying openings. But ok, six hours it’s not a good idea, to say the least. I was just playing too slowly and I was tired, but it’s my own fault that I prepared so much.

Anish Giri was an absolutely deserving winner, however, and was right to bask in the glory…

…even if the haters are never far away!

Anish had won the grand first prize of a signed photo of a horse, and understood its value:


People think the first prize is a joke, or not serious, unlike the Magnus Carlsen Invitational where it’s 80,000 euro or whatever, but I have a suspicion that this picture could be worth a lot, you just have to find the right customer, which is why I took part as well. I’m hoping to make use of this victory!

Plan A is to sell the photo to Peter Svidler, who might be tempted to buy it if for no other reason than to make up for his unconscionable faux pas of insulting the horse.

Peter also tried to rescue the situation with praise for the man on the horse and his tournament:

An incredibly fun thing, I hope it reemerges! Thanks to Dodgy for not giving up on it when the whole world was laughing at him hysterically, and well-played to the winners.

The question now, of course, is where you can go from here...

We hope you enjoyed the event and will join us for that rival Magnus Carlsen Chess Tour that reaches its third stage on Saturday with the Chessable Masters.