Vladimir Kramnik and Shakhriyar Mamedyarov were rested as Anish Giri led Siberia-Sirius to victory in the 2017 Russian Team Championship. The favourites did it with a round to spare after 5:1 wins against two weaker teams, with Anish Giri finally ending a sequence of four draws with a win in Round 6. Vladimir Malakhov’s Legacy Square Capital are set to take silver after beating Peter Svidler’s Bronze Horseman in Round 6. The hero was Grigoriy Oparin, who defeated Aleksey Goganov on bottom board.

This year’s Russian Team Championship hasn’t exactly been high on intrigue. Since Yugra (Ushenina, Pogonina, Girya) beat Alexandra Kosteniuk’s Legacy Square in Round 2 of the women’s tournament their ultimate victory has looked assured (they have 14/14 and a 2-point lead with one round to go).

In the Higher League favourites “Friends of Ivan Bukavshin” conceded just one draw as they cruised to victory with a round to spare. In the Premier League, as we reported after Round 4, the favourites Siberia were all but impossible to catch after they’d beaten their four biggest rivals before facing three underdogs in the last three rounds.

So it proved, with Siberia able to rest both Vladimir Kramnik and Shakhriyar Mamedyarov for Rounds 5 and 6 and still score crushing wins. First there was the match against bottom-placed Zhiguli:

As you can see, Nepomniachtchi, Andreikin, Korobov and Khismatullin got expected wins, while Giri and Grischuk were frustrated with the black pieces. In fact, Predke was clearly better against Giri at one stage, while in the end we got a curious ending where the black knight looked to have its work cut out for it against the white pawns:

Fortunately for Giri the h3-pawn is doomed and the knight was acrobatic enough to get back to defend in time:

In Round 6 Siberia repeated that score to reach 12/12 and claim the 2017 Russian Team Championship with one round still to go:

This time Anish also got in on the action with some help from a strong opponent, 2640-rated Evgeny Romanov:

Romanov has had a hard time in Sochi, losing not just to Giri but to Svidler, Malakhov and Artemiev as well. It’s only fair, therefore, to give his one bright moment of the tournament – his Round 5 win over Ivan Rozum. There’s another reason, since it’s an example of why it pays to follow other events! David Navara claimed his 8th Czech Championship recently by a full point after winning 7 of his 9 games (he also lost one).

In Round 5 he beat Thai Dai Van Nguyen with an apparently quiet but lethal move:

Four days later in Sochi… Romanov found himself in this position with the white pieces:

Returning to the massacre of Siberia’s deciding match… Alexander Grischuk’s demolition of Kirill Alekseenko (2585) was perhaps the most fun to watch. It wasn’t all sacrificial blows:

Of course the trick on this and the previous move is that 38…Qxh6 now runs into 39.Nxf7# Only the clock could save Alekseenko, but after 38…Rg7 (the only way to delay mate) 39.fxg7+ Qxg7 40.Nxf7+ White gained 30 minutes to go with the extra piece and continuing attack. Black threw in the towel.

Anton Korobov claimed to have forgotten the last time he was over 2700... well, he's back! | photo: Vladimir Barsky, Russian Chess Federation

Grischuk had therefore won all four of his white games for Siberia. Other driving forces were Mamedyarov, who scored 3/3 on Board 2, and Anton Korobov, who crushed the lower order with 4.5/5. Combined with his impressive performance in Poikovsky, the likeable Ukrainian is now right back up there in the 2700 club. In Sochi he’s been joined by Vladimir Fedoseev, while 19-year-old Vladislav Artemiev continued his policy of winning with White and drawing with Black to climb to 2695.9.

Artemiev played the Najdorf and got a quick draw against Peter Svidler in Round 5 | photo: Vladimir Barsky, Russian Chess Federation

Siberia didn’t post a clean sweep, though, thanks to some heroics from the surprise hero of the 2017 Russian Team Championship. Untitled Grigory Palchun has climbed over 50 rating points after proving tricking Aleksey Goganov in a messy position in Round 1 was no fluke! 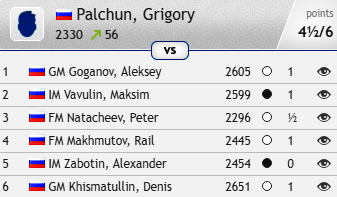 He again got a helping hand in the final round. Maybe the always entertaining Denis Khismatullin was getting too carried away with what was happening on the other boards when he went for the “spectacular” 31…Ne5??

Grigory didn’t flinch! 32.dxe5! Rxd2 33.exf6! and White is threatening to win the queen with Bxe6. 33…R2d6 stopped that, but left a ruined position in which White has multiple wins. In the play that followed 34.Qxg5 Palchun found the time to sacrifice his queen and a bishop before his opponent offered his hand in resignation.

The next generation are also in action in the same venue! | photo: Vladimir Barsky, Russian Chess Federation

Elsewhere the fight has been about silver and bronze medals, with the less said about Legacy Square Capital and Malakhit drawing fast on all six boards in Round 5 the better. Caissa didn’t take revenge on either team, however. Legacy Square went on to score a narrow 3.5:2.5 victory over Bronze Horseman, with Grigoriy Oparin winning on bottom board after Svidler-Malakhov and all the other games were drawn. Malakhit won in Round 6 to keep reigning champions Bronze Horseman out of the medals before the final round: (this table will update during the final round on Wednesday, while you can click any result to go to the top game in that match)

So, all that’s left is Wednesday’s final round, when we’ll get to see who’s still in Sochi! Today, at least, Vladimir Kramnik was at the Sirius School which gives the team its name:

Will Giri and Mamedyarov already be on their way to the Moscow Grand Prix that starts this weekend? You also have our permission to “switch channels” and watch Round 1 of TePe Sigeman Chess, when 51-year-old Nigel Short is gunning for 2700, but will face tough resistance from Pavel Eljanov, Baadur Jobava, Nils Grandelius, Erik Blomqvist and Harika Dronavalli.

Follow the final round of the Russian Team Championship from one hour earlier at 13:00 CEST on Wednesday here on chess24: Premier League | Women's League | Higher League. You can also watch in our free mobile apps: