Ian Nepomniachtchi beat Sergey Karjakin to take the lead in the Russian Championship Superfinals, but the key event at the start of the second half of the tournament was the news that Mikhail Antipov was out of the event after testing positive for the coronavirus. As more than half of the tournament had already taken place his earlier results stand, while players scheduled to play him in the later rounds receive a forfeit win. Polina Shuvalova's perfect 100% run is over, but she continues to lead Aleksandra Goryachkina. 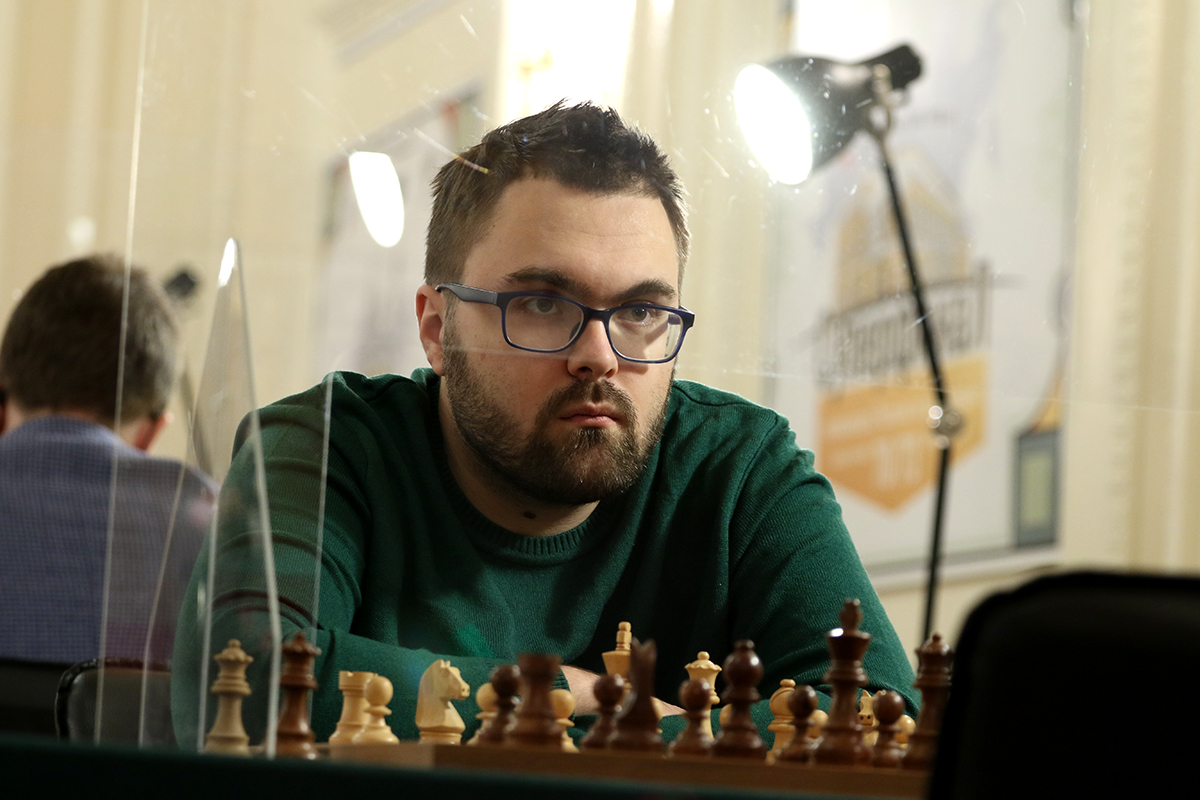 Mikhail Antipov is out of the tournament after testing positive for coronavirus | photo: ruchess.ru

Before Round 7 began everyone was excited about the clash of the leaders. Ian Nepomniachtchi was set to play Sergey Karjakin, but the big news of the day wasn't their game. Mikhail Antipov didn't show up for his game against Andrey Esipenko. The official news item on the Russian Chess Federation website was brief:

Mikhail Antipov is out of the tournament. According to the regulations the results in his games stand. All his opponents from Round 7 onwards will receive a forfeit win.

However, a number of sources, including Sergey Shipov on the official Russian broadcast, announced that the reason was a positive coronavirus test. It turned out that the tournament would go on, with the 7th and 8th rounds both taking place as planned.

The clash of the two leaders, which was expected to be a very tense fight, turned into a walkover. Ian Nepomniachtchi surprised his opponent by choosing 4.f3 in the Nimzo. Until move 14 they repeated the game from the Candidates Tournament where Fabiano Caruana beat Kirill Alekseenko, but Ian then played the novelty 15.Bf4!?. Sergey turned out to be unprepared for that move, began to burn up time, and four moves later went astray.

I was lucky that I got to play such a crucial game as White after a rest day. I managed to prepare well and win the opening.

Maksim Chigaev managed to beat Vladislav Artemiev. In an endgame with an extra pawn for White, Vladislav had chances if not to equalise then at least to pose real problems to his opponent, but in time trouble he committed the decisive mistake.

The remaining three games: Fedoseev-Goganov, Dubov-Vitiugov and Matlakov-Svidler featured few notable moments before they all ended in draws. 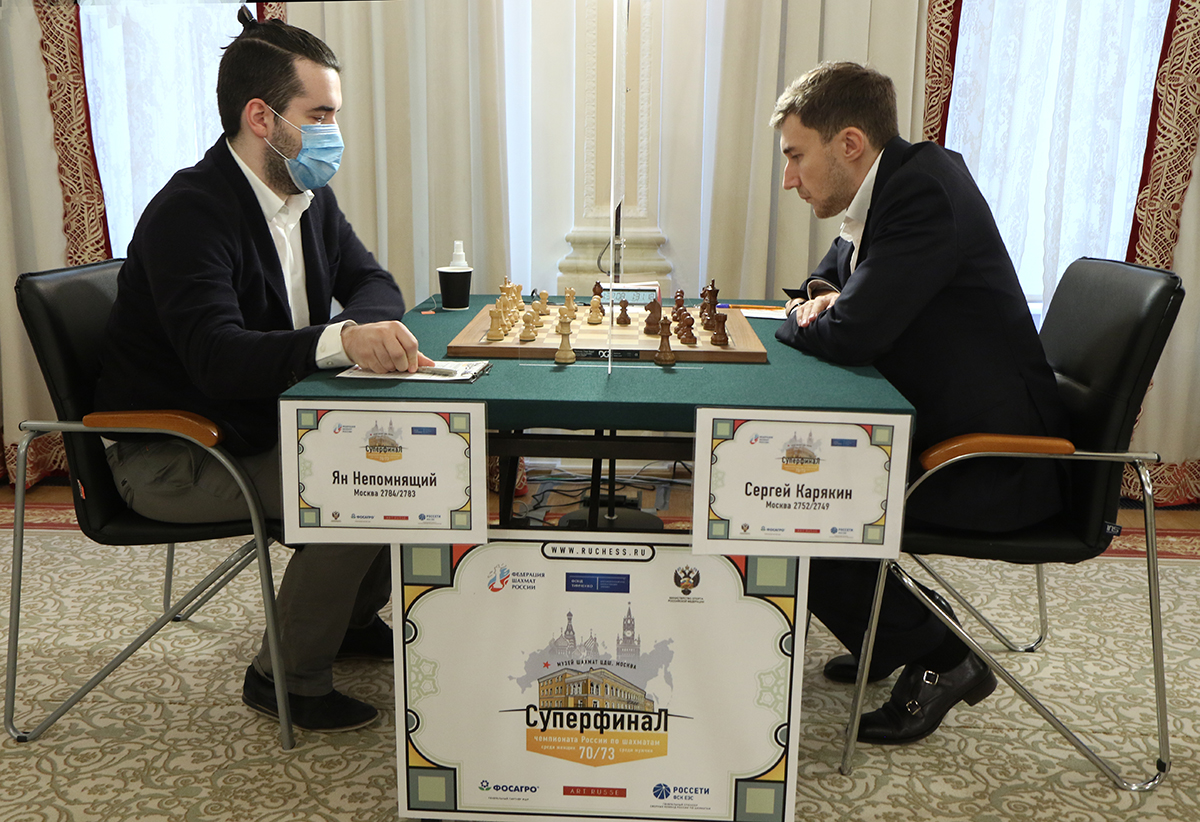 Round 8: Karjakin cuts the gap

In Round 8 Ian Nepomniachtchi was unable to beat Vladimir Fedoseev. In fact, Vladimir had a small edge, but it was never likely to be enough to play for a win.

Sergey Karjakin reduced his gap to the leader to half a point after beating 8-time Russian Champion Peter Svidler with the white pieces. Sergey got an edge out of the opening in the Najdorf, but didn't follow-up in the best manner and allowed Peter to reach an equal endgame. In time trouble, however, Svidler committed a decisive mistake while making a move with two seconds on his clock.

The game Artemiev-Matlakov followed a similar scenario, with the decisive mistakes there also made in Black's time trouble. 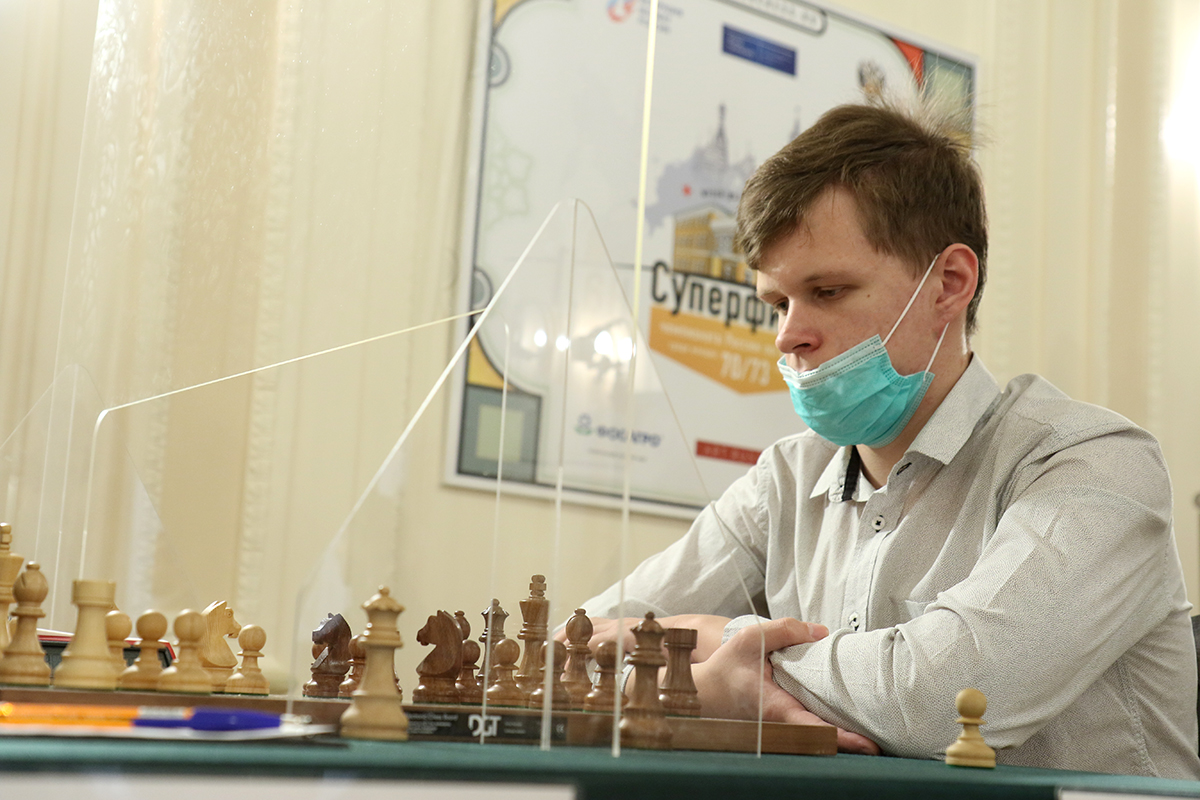 Elsewhere Daniil Dubov confidently beat Aleksey Goganov. Nikita Vitiugov played an excellent piece sacrifice against Andrey Esipenko and conducted an attack which should have led to victory, but he went astray and the whole advantage had gone. A draw on move 43.

Round 7: Shuvalova drops her first points

After 6 wins at the start, Polina Shuvalova conceded her first half point. The game against Leya Garifullina ended in a draw on move 43 without any particular drama. There was real beauty, however, in Alina Kashlinskaya's game. In a complicated battle she managed to outplay Alisa Galliamova and end the game with a spectacular queen sacrifice.

I had just 10 seconds left and was hoping that after the queen sacrifice it would turn out there was perpetual check, but I got lucky and it turned out to be mate! 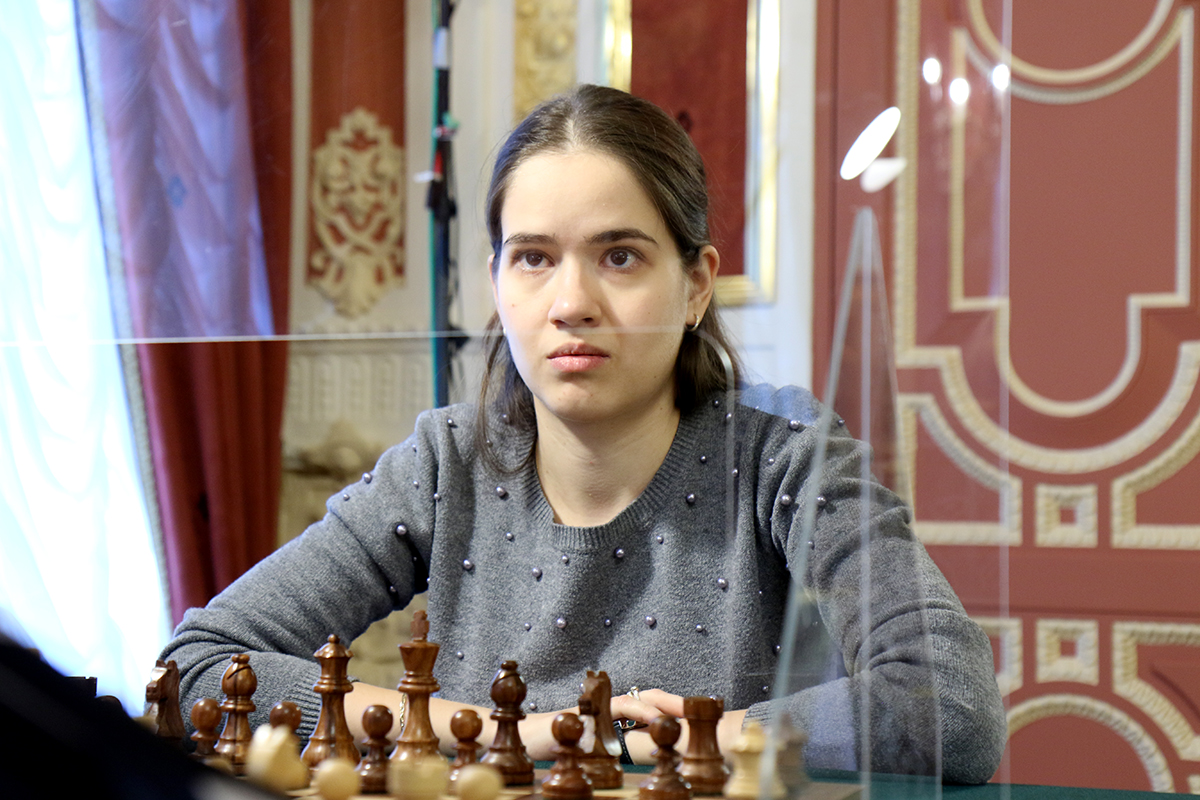 Alina Kashlinskaya won due to a brilliant combination with a queen sacrifice | photo: Eteri Kublashvili, ruchess.ru

Alexander Kosteniuk scored her third win in a row. She managed to outplay Valentina Gunina in a complicated struggle after Valentina went for a risky piece sacrifice.

There were also wins for Aleksandra Goryachkina, Natalia Pogonina and Marina Guseva.

After her first draw in the tournament, Polina Shuvalova suffered her first loss. Playing with the white pieces she made a serious mistake on move 28.

Aleksandra Goryachkina wasn't able to catch the leader, but she reduced the gap to just half a point after drawing against Marina Guseva. Alexandra Kosteniuk also drew against Olga Girya. 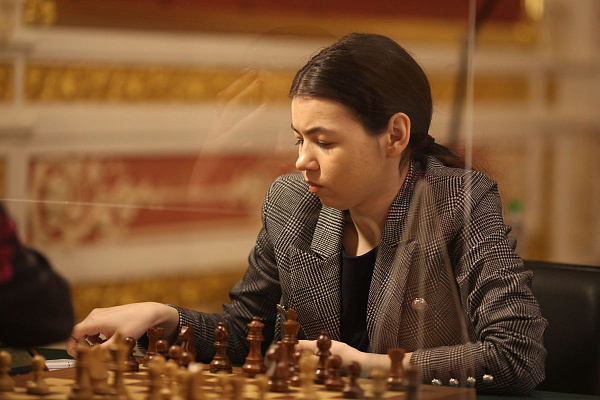 The remaining games all finished decisively. Leya Garifullina endured a worse position in her game against Tatiana Getman, but ultimately managed to win. Leya, the youngest player in the tournament, got to within a point of leader Polina Shuvalova and half a point of Goryachkina.

After a fantastic game the day before, Alina again managed to win, beating outsider Yulia Grigorieva with White. Valentina also won a far from flawless game after sacrificing a piece against Natalia Pogonina.

You can follow all the Russian Championship Superfinal games with English and Russian commentary on chess24 from 13:00 CET each day! Open | Women