Peter Svidler’s bid to win an 8th Russian Championship got off to a perfect start as he beat 3rd seed Ernesto Inarkiev in Novosibirsk. He followed that by starting a video experiment in which he recaps the game while it’s still fresh in his mind and before any serious computer analysis – it’s not quite Banter Blitzing the Superfinal, but it’s not far off! In the day’s other decisive games Alexander Riazantsev competed with Svidler for style points as he put Dmitry Bocharov to the sword, while Vladimir Fedoseev finally took home the full point against Nikita Vitiugov in 83 moves. 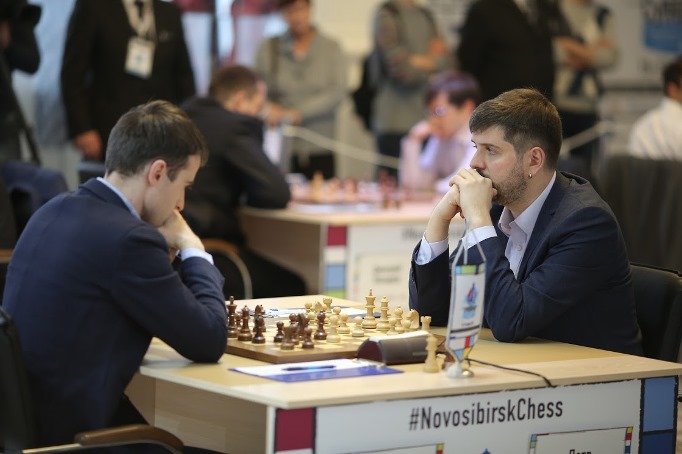 Peter Svidler beat Ernesto Inarkiev as he seeks to win the Russian Championship for the 1st time since 2013 | photo: A. Ziler

The 69th Russian Men’s Championship Superfinal is taking place in the Museum of Local History in Novosibirsk and, apart from a first prize of around 15,000 euro, the winner gets a Renault Captur car worth around the same amount. Renault seem to be exploiting the PR-debacle of BMW giving Sergey Karjakin not a car (as he and everyone else assumed) but a test drive after the Moscow Candidates. It might be a long drive, though…

The top seed this year is Alexander Grischuk, who is also Karjakin’s tip for the title:

It would be foolish to write off 7-time Champion Peter Svidler, though, especially since the results of the first round now leave him live-rated above Grischuk: 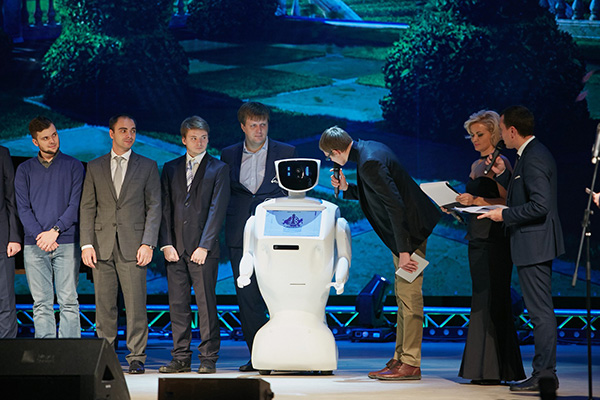 The signs were good for Svidler when a friendly-looking robot picked out no. 1 for him - and hence two Whites at the start for a second tournament in a row | photo: A. Ziler

The day’s one all-2700 clash saw Ernesto Inarkiev brutally punished for repeating Levon Aronian’s play against Veselin Topalov from the last round of this year’s Sinquefield Cup while apparently having no improvement prepared. Svidler felt the Anti-Berlin game would have been a miniature if he’d gone for 14.g4!, but as it was we got to see some very enjoyable chess played in mutual time trouble:

29.Rxg7!! was the “more romantic option” that Svidler decided to go for rather than first playing 29.Bxe6.

Don’t miss Peter’s honest and illuminating account of the game:

In case you haven’t watched it yet, Peter ends by summing up:

I'm very pleased with this because I rate Ernesto very highly - I think he's a very strong chess player and also for me it's always been incredibly important to start well in tournaments - and what can be better than winning a first round game against one of the people you expect to be your biggest competitors in the tournament.

I'm playing White against Vladimir Fedoseev tomorrow, who also started with a win. He beat Nikita Vitiugov in a very complicated Caro-Kann game which he seemed to have played very well. I haven't actually played Vladimir in a classical game yet so this will be my first classical game against him. It will be quite interesting to see what transpires. He's my club mate, we both play for the St. Petersburg club. I've seen him play from a distance. He's a very interesting and exciting attacking player.

Only Grigoriy Oparin (19) is younger than 21-year-old Fedoseev at this year’s Superfinal, with the Russian Chess Federation sticking strictly to the qualifying criteria rather than, for instance, inviting 18-year-old Vladislav Artemiev, who recently climbed to world no. 3 on the blitz rating list after dominating the Russian Blitz Championship. Artemiev is instead playing in the Chigorin Memorial in St. Petersburg (check out his very nice win from Sunday), while even in-form Ian Nepomniachtchi’s offer to play in the event was rebuffed. 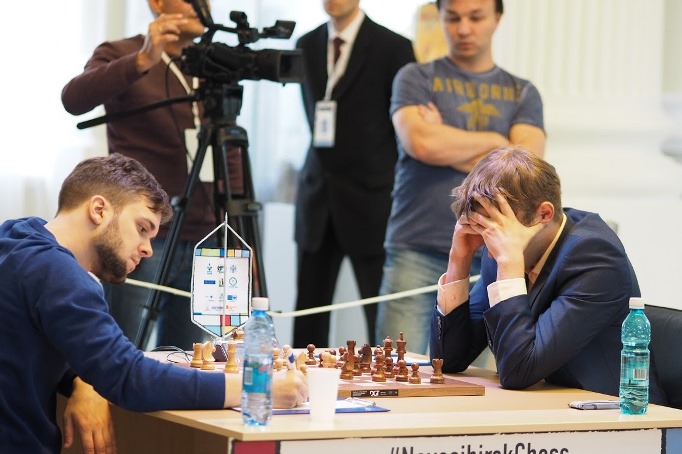 Fedoseev had soon given Vitiugov a lot to think about | photo: A. Ziler

Vladimir Fedoseev has built his reputation on tactical chess, but he managed to claim the scalp of Nikita Vitiugov with a positional crush of his opponent’s Caro-Kann. After 39.bxc5 Black looks to be in trouble:

It seems only a matter of time before White will be able to organise his pieces to win the b7-pawn and game. That did indeed prove to be the case, but no-one could have predicted it would take quite so much time! The pawn only finally fell on move 81, with Fedoseev making absolutely sure not to lose his grip on the position. 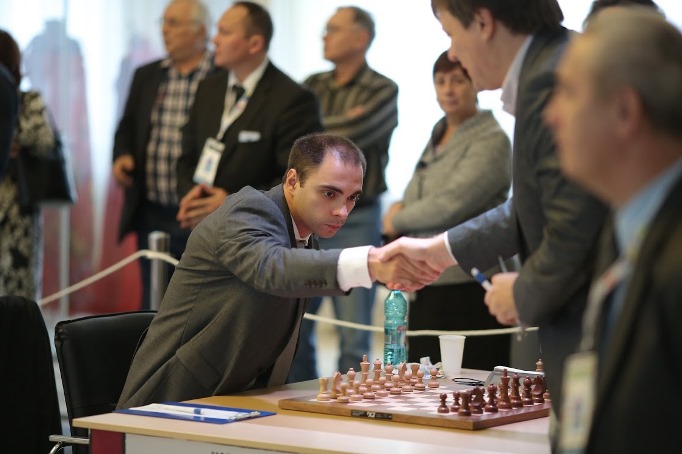 While Svidler and Fedoseev took their time to convert their advantages, Russian team coach Alexander Riazantsev showed absolutely no mercy to Dmitry Bocharov. Black failed to make it out of the opening, with 19…b5 an admission that something had gone badly wrong: 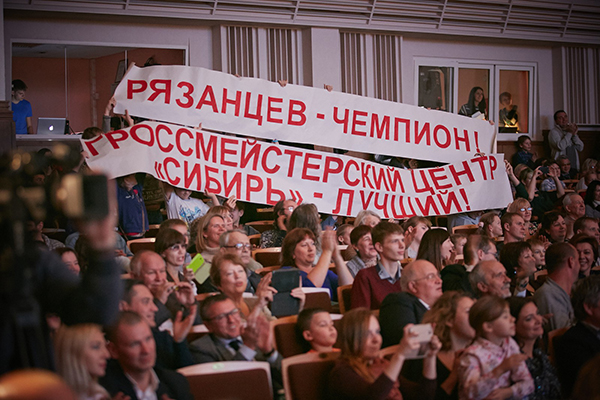 Alexander had to do it for his supporters! The banners read: "Riazantsev - Champion!" and "The 'Siberia' Grandmaster Centre is the best!" | photo: A. Ziler

The most exciting of the draws was Goganov-Grischuk, with Grischuk playing the Dutch Defence and spending over an hour on his first ten moves. He launched a sacrificial pawn storm and survived the inevitable time scramble, but couldn’t quite find a killer blow. 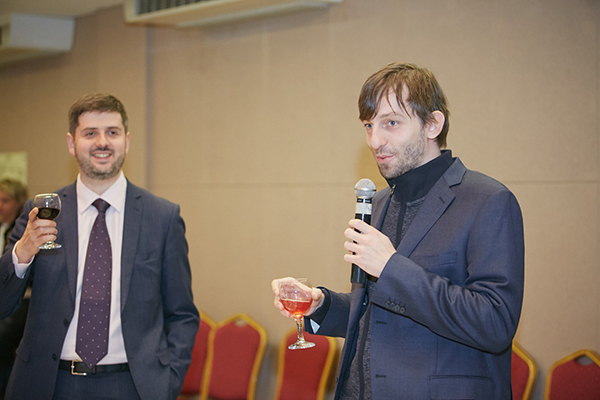 The toasts began early for Alexander Grischuk... | photo: A. Ziler

In the women’s tournament (for which first place also earns a car!) there were wins for Kosteniuk, Girya, Ubiennykh and Gunina. 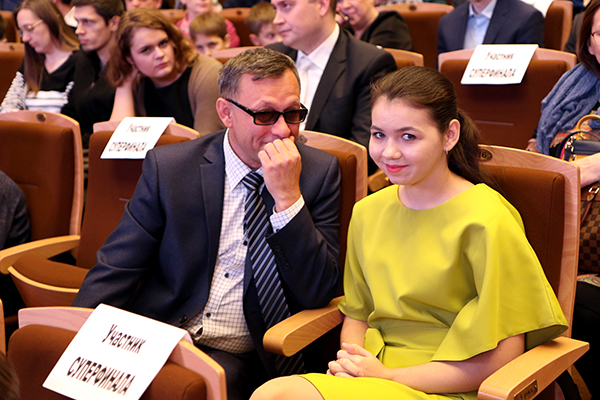 After 13.Bxc4! Nxa1?! 14.b4 Qd8 15.Nxe4 White picked up the knight on a1 and had two pieces and a pawn for a rook. Gunina kept queens on the board, but it soon turned out that just left White with an overwhelming attack as well as a material advantage. 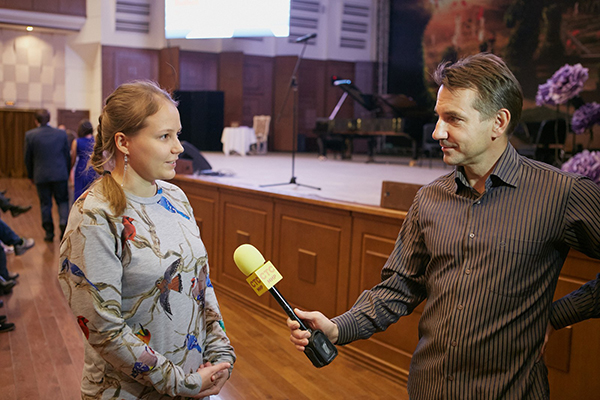 Valentina Gunina lost her opening Russian Championship game for the third year in a row - in 2014 she memorably lost her first two games and then won the next seven! | photo: A. Ziler

Replay all the women’s games in the selector below:

Apart from Svidler-Fedoseev mentioned above, Inarkiev’s tough start continues with White against Grischuk, while if Vitiugov wants to bounce back he’ll have to do it against reigning Russian Champion Evgeny Tomashevsky. 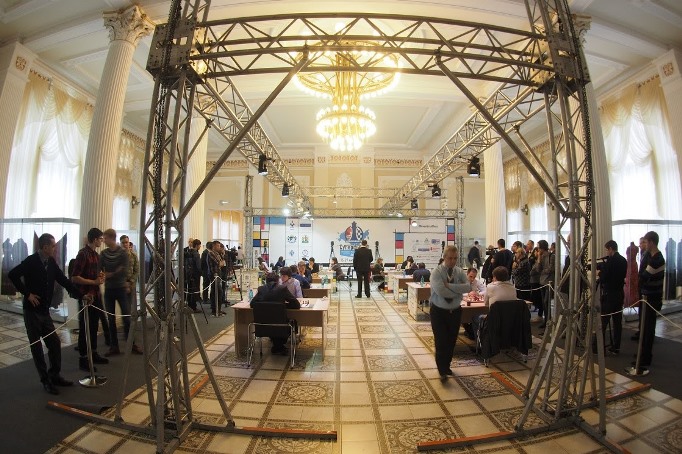 The impressive venue in the Novosibirsk Museum of Local History | photo: A. Ziler

Don’t miss all the games from 10:00 CEST, with commentary in English by Evgenij Miroshnichenko.

You can rewatch the Round 1 commentary below: