The Russian women's team already has a great chance of winning its first ever World Team Championship after battering 3-time champions China 3:1 in Saturday’s opening round in Khanty-Mansiysk. The news got better as their next closest rivals Georgia were held by India. In the open section top seeds China and Russia both had an easy start, but Turkey held Ukraine to a draw and the USA only squeezed past Norway. Poland beat India in the match of the round, with Duda and Piorun brilliantly making up for Wojtaszek losing to Vidit. 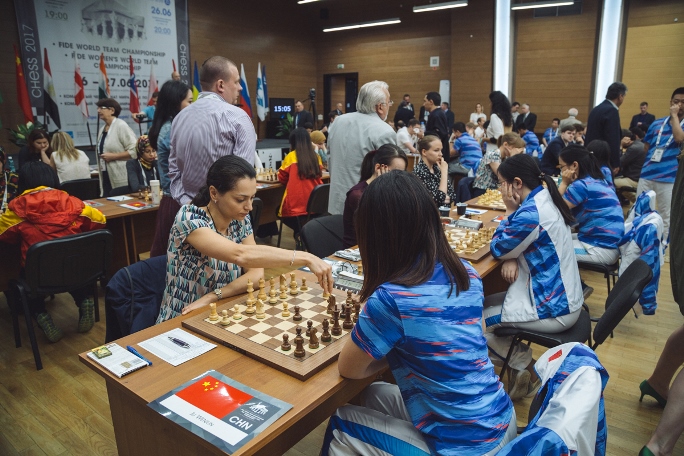 In the past the overall World Team Championship and the women’s event have been held at different times and in different venues. In 2015 they were held at the same time, but over 5,000 km apart (in Tsaghkadzor, Armenia and Chengdu, China). This time, though, both events are taking place side by side in the Siberian chess mecca of Khanty-Mansiysk. 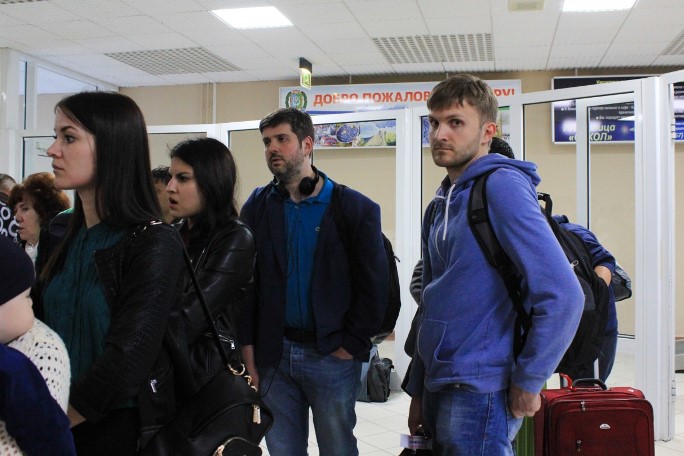 The early arrival may have been a bit much for some! | photo: official website

That means the experience of the event should be a lot more like the Olympiad, with which it alternates each year, though the format remains the same: 10-team all-play-all tournaments taking place over 9 rounds, with matches held over 4 boards. The qualification system was complicated, but for instance in the open section Egypt qualified as African Champions, Norway, Turkey and Poland finished high up in the Olympiad, and Belarus received the FIDE President’s wildcard. 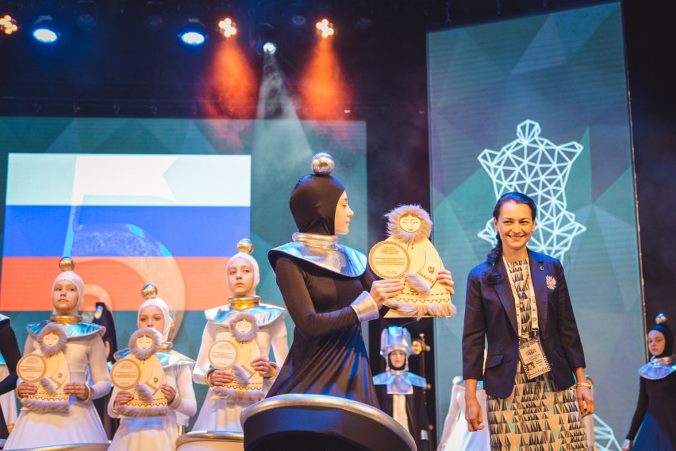 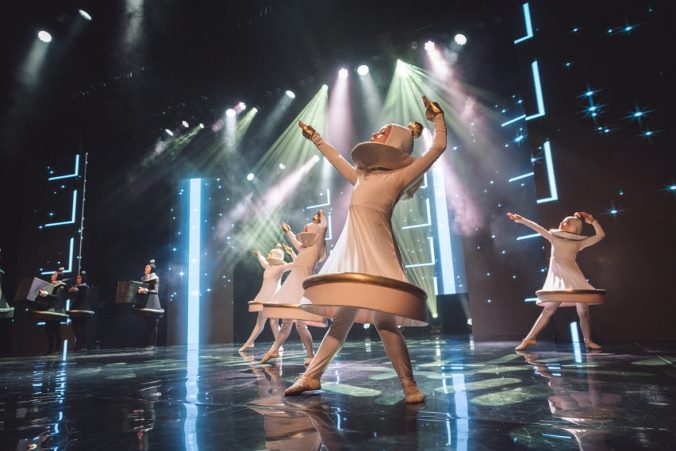 And of course there was dancing | photo: official website

The first round results in the open section were as follows (click on a result to go to the game with computer analysis):

The luck of the draw meant that Russia had an Olympiad-like start, playing their weakest opponents, Egypt. They duly won, although Ian Nepomniachtchi’s draw against 360 points lower rated Abdelrahman Hesham was less than convincing. Peter Svidler saw his wish granted to have a rest day on his birthday! 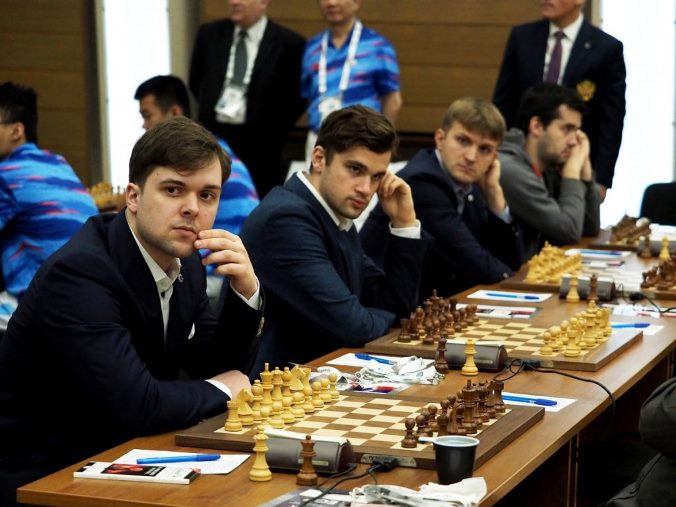 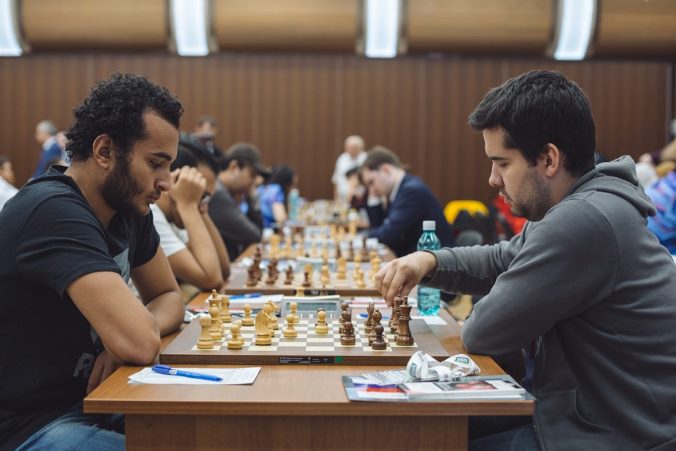 Ian Nepomniachtchi may have missed the memo on the dress code as he faces Hesham | photo: Anastasia Balakhontseva, official website

China have the event’s only Top 10 player due to the clash with Norway Chess and the Grand Chess Tour events in Paris and Leuven, though Ding Liren started with a draw against Sergei Zhigalko of Belarus. The remaining players did the job, with Wei Yi’s victory taking the 18-year-old to a new live ratings high of 2740.9 and world no. 17. There were tough matches elsewhere, with the three lower boards in Turkey-Ukraine surprisingly all drawn in 30 moves or less despite the Ukrainian team having a healthy ratings edge on all boards. That left the burden on Ruslan Ponomariov to win a rook ending against Dragan Solak, but instead we got more proof that all rook endings are drawn. 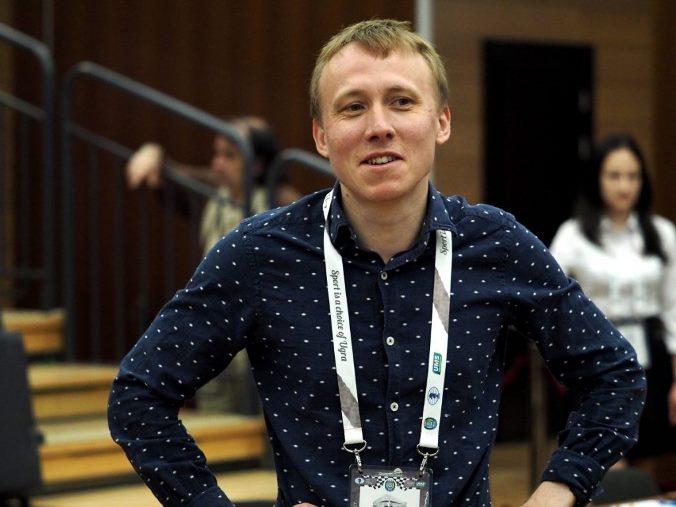 Norway looked on course to pull off an upset against the USA, but Frode Urkedal was another victim of the drawish tendencies of rook endings (against Alexander Onischuk), while Varuzhan Akobian’s great year continued with a crucial win over Frode Elsness. 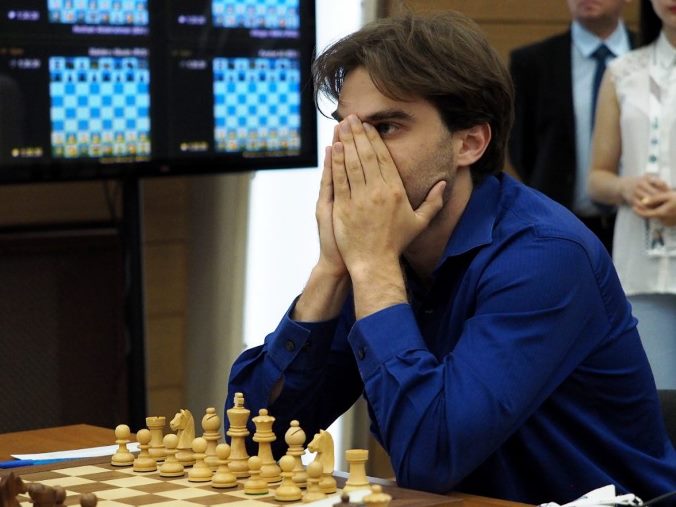 Shankland & Robson are the only survivors of the Olympiad-winning US team | photo: Peter Ermakov, official website

On paper the match of the day was India-Poland, and it more than lived up to expectations. First there was a shocker, as 22-year-old Vidit played 6.Ne5, a move he’d prepared as a second of Anish Giri, and was close to winning by move 19 against openings expert Radek Wojtaszek. He sealed the game with 27.Rxe8:

After 27…Qxe8 28.Qxf6 Black can only delay the inevitable Be6+. That result took Vidit to within a single win of crossing 2700 for the first time. 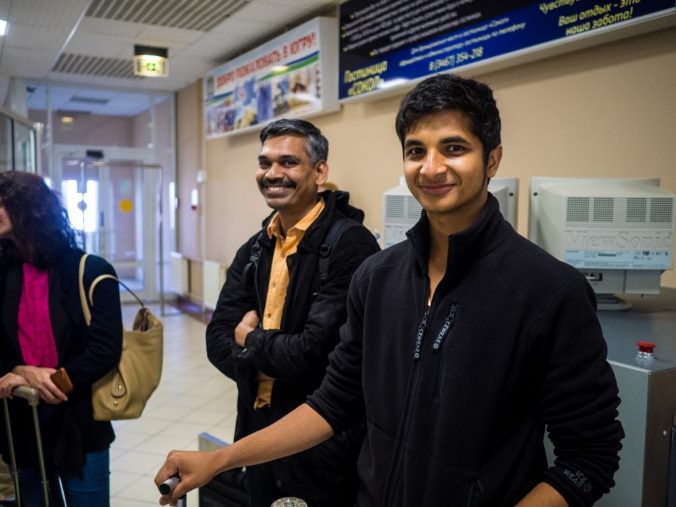 The other players on the Polish team had to step up and that’s just what they did. First Kacper Piorun beat Indian Champion Karthikeyan Murali with a brutal kingside attack:

Poland have strong medal chances in the World Team Championship, since their board two is 19-year-old Jan-Krzysztof Duda, live-rated above 2700 and currently the world’s 2nd best junior after Wei Yi. In Round 1 he took playing the ever-dangerous Adhiban in his stride and went on to play the game of the round, full of solid strategy and brilliant tactical points. 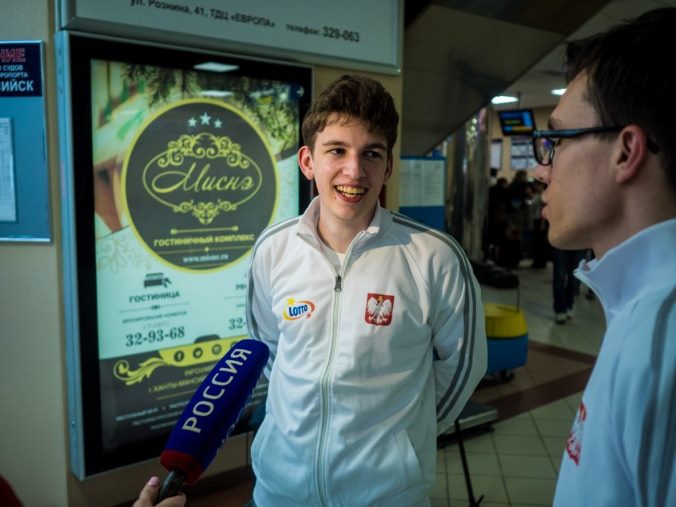 Duda went on to ease to victory, and when Bartel held an 81-move draw against Negi the match had gone Poland’s way. 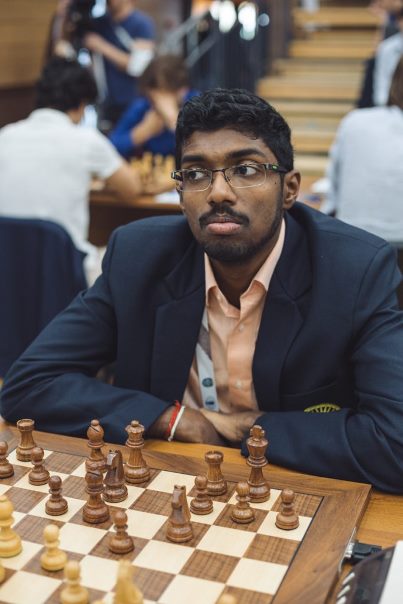 As mentioned, the women’s section started with a bang, with two crucial matches for the ultimate standings:

China won the first three Women’s World Team Championships (Ukraine and Georgia won the next two), but they got off to the worst possible start with a 3:1 loss to Russia. It wasn’t just the scoreline that was depressing but the manner in which they lost the games. It all seemed to be going well until Zhao Xue simply blundered a piece against Valentina Gunina with 14…Rfe8??, leaving the b6-knight en prise:

She either missed that after 15.Rxe8+ Rxe8 16.cxb6 Bxf3 White captures with the pawn rather than getting mated on the back rank. Or that after 17.gxf3 Black can't regain the piece with 17...Re1+ 18.Kg2 Rxd1 due to 19.bxc7! and there’s nothing Black can do to stop a new queen from appearing on the board. 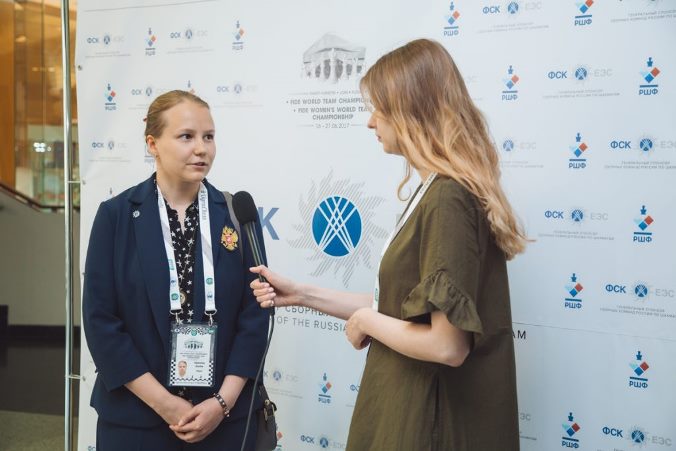 That error was compounded when Women’s World Champion Tan Zhongyi rejected a repetition and missed other chances to draw before losing to Kateryna Lagno. Olga Girya returned the favour by blundering against Lei Tingjie, but Ju Wenjun had a position that gave her no chance of rescuing the match for China. Alexander Kosteniuk brushed off having her watch confiscated... 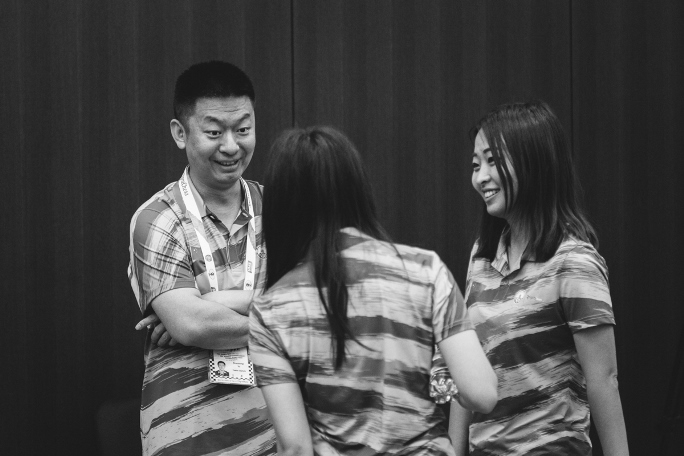 A 2:2 draw was already an impressive achievement for India against defending champions Georgia, but it could have been more. Vijayalakshmi managed to lose the following position with Black against Nino Batsiashvili:

Black is a piece up for two pawns, but the pawns proved a nightmare for the Indian player. By move 61 the win had gone, but it wasn’t too late to draw:

Harika Dronavalli saved the day with a counterattacking win on top board against Nana Dzagnidze. 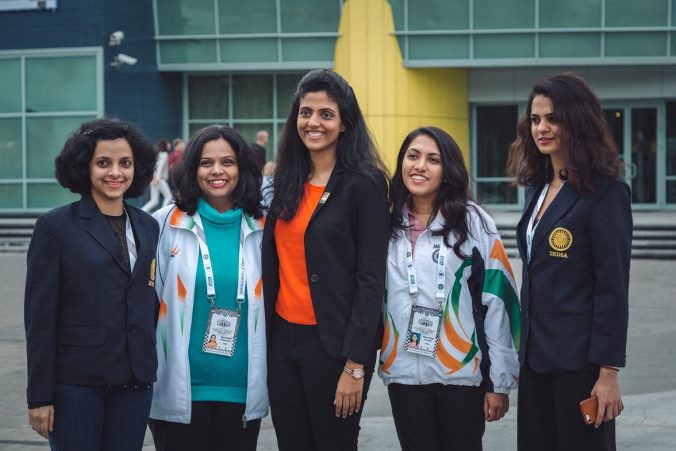 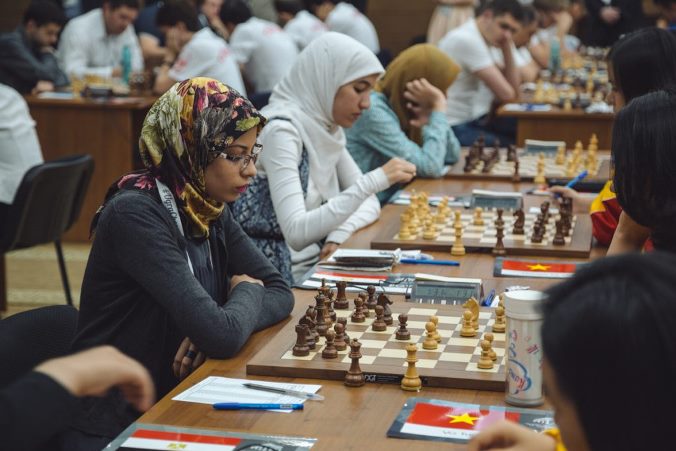 Vietnam 4:0 Egypt was the day's only whitewash - it's going to be a long event for the Egyptian teams! | photo: Anastasia Balakhontseva, official website

You can replay the Round 1 commentary with Anna Rudolf and Evgeny Miroshnichenko below:

Tune in for the Round 2 commentary on Sunday from 12:00 CEST: Open | Women. You can also follow the games in our mobile apps: