The Russian men’s team have won the World Team Championship for the first time since 2013 after they crushed Sweden while England lost to China and India drew against the USA. Gold was also decided with a round to spare in the women’s section, where the Chinese team won an 8th match in a row to claim a first Women’s World Team Championship since 2011. Tan Zhongyi (6.5/8) and Lei Tingjie (6/7) got the wins against the USA. Silver and bronze medals will be up for grabs as the last round starts three hours earlier than usual on Thursday. 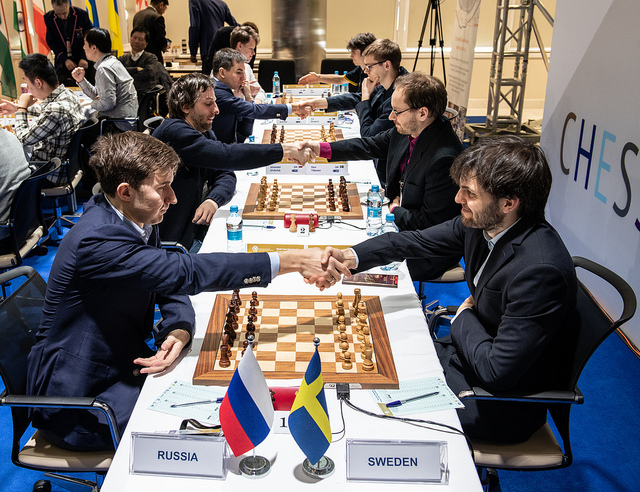 The Russian men’s team doesn’t have a stellar reputation in team tournaments, but that’s largely down to the Olympiad, which they’ve famously failed to win since 2002. Over the same period they’ve now won 4 of the 7 World Team Championships that have been played, and this time round they took full advantage of beating their key rivals China in Round 3. By the penultimate round they knew a victory might win them the title, and they methodically set about crushing the Swedish team:

Sergey Karjakin, the only player to lose a game for Russia in the event (in fact he lost two in a row), was happy to take a draw against Sweden’s top player, Nils Grandelius. On the other boards no mercy was being shown:

Hans Tikkanen had earlier gone for a very risky pawn grab, and Alexander Grischuk said of this position, “Instead of 14.g4 I could have gone for the cowardly 14.exf6 gxf6 15.dxc5 and won back the pawn, but I didn’t really like that”. After 14…Nge7 15.gxf5 he felt (and the compute agrees) that 15…Nxf5? was a big mistake, with White dominant after 16.Bg2. Grischuk was expecting a complex battle after 15…exf5.

Dmitry Andreikin beat Erik Blomqvist, while the match completed the Russian first team debut of Vladislav Artemiev, who scored yet another impressive win to finish on 6.5/8: 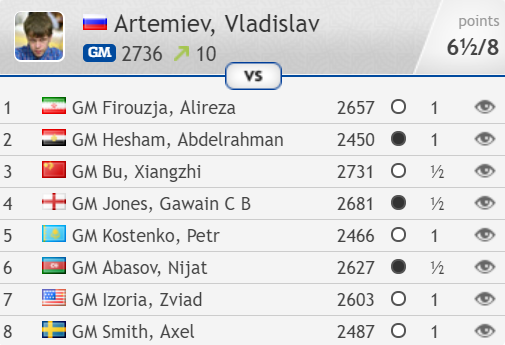 That took him above Sergey Karjakin into the world no. 16 spot, now just 0.1 points behind Hikaru Nakamura. 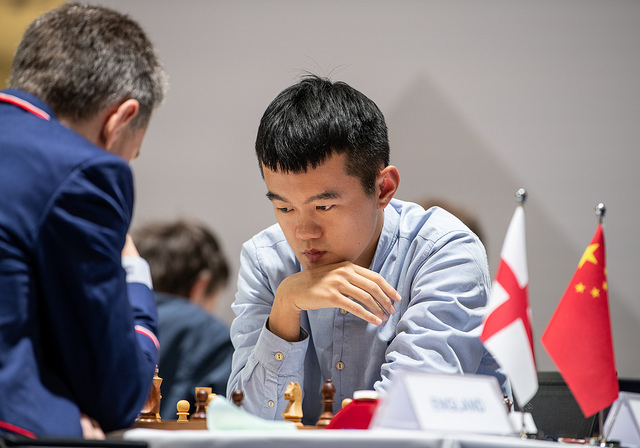 That win proved enough for the title after the chasing pack stumbled. China finally looked recognisable as the defending World Team and Olympiad champions, as they defeated second placed England 3:1. The key game was Wei Yi – Howell, which was played out in seemingly inevitable time trouble:

The crunch came on move 37, when David Howell was down to just 34 seconds:

With that game hopeless for England Mickey Adams also slipped to a 4th defeat in Astana as Ding Liren picked up his first win since the opening round. 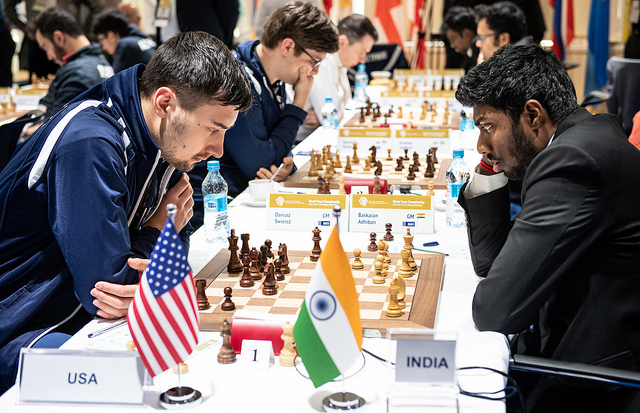 Adhiban would finally scrape a draw against Swiercz, but it wasn't the win India needed for a chance of gold medals | photo: David Llada, official website

India could also have delayed Russia’s coronation with a win against the USA, but the chances for that faded when 18-year-old Sam Sevian correctly grabbed a pawn against Sasikiran and won in 32 moves.

Ganguly, who’s scored an impressive 6.5/8, levelled the score by beating Alexander Onischuk, but on the last board to finish it was only a question of whether Dariusz Swiercz would convert a big advantage against Adhiban. He didn’t, ultimately, after the Indian star took advantage of his opponent’s time trouble to wriggle out of the danger. The game ended with bare kings on move 88. 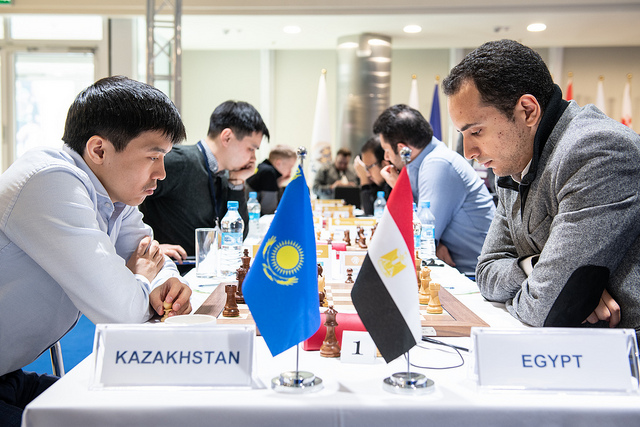 Egypt's only previous point in the event had come from a shock draw against China, but they picked up their first win against Kazakhstan in the penultimate round | photo: David Llada, official website

That meant Russia took gold with 14/16, but with India and England level on 11 points, China on 10 and the USA on 9 the other medals are still completely up for grabs. None of those teams play each other, as we have England-Sweden, Kazakhstan-China, USA-Iran and Russia-India in the final round. 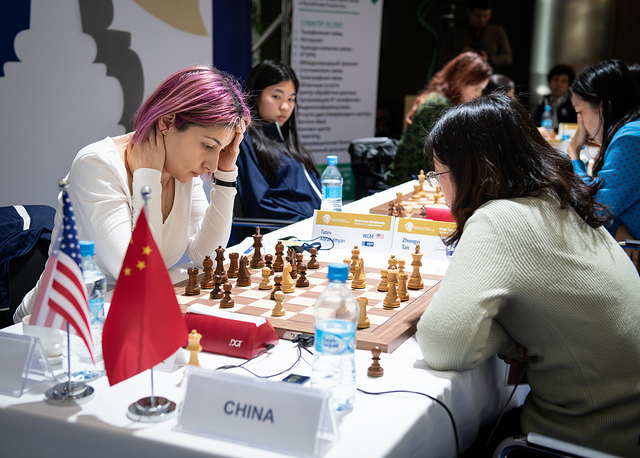 Carissa Yip could see her teammate was in trouble on top board | photo: David Llada, official website

There were no surprises in the women’s section, as China won their 8th match of the event with a comprehensive victory over the USA. Tan Zhongyi led the way, planting a knight on e7 by move 20:

Tatev Abrahamyan probably needed to eliminate the intruder at the cost of an exchange with 20…Rxe7, since after 20…Kf8? 21.Bg3 Ng8 22.Nd5 Black could only avoid the threat of the exchange-winning Nc7 by getting hopelessly tangled up. Resignation came on move 29.

Lei Tingjie completed the job on board 3, with a nice finish against Sabina Foisor: 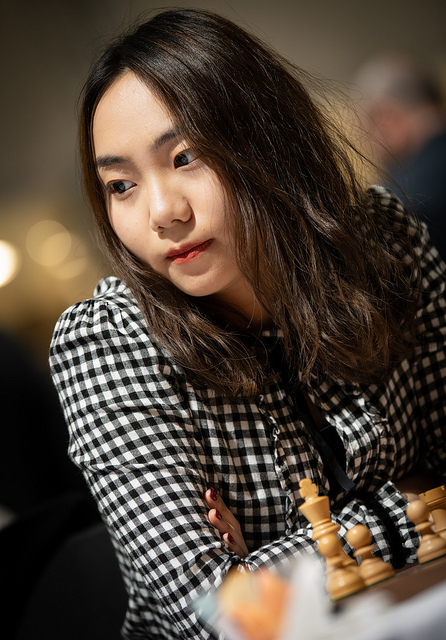 22-year-old Lei Tingjie was one of the driving forces behind the Chinese team | photo: David Llada, official website

That was a 5th win in 7 games for Lei Tingjie, who the Chinese team had deliberately given the white pieces as often as possible: 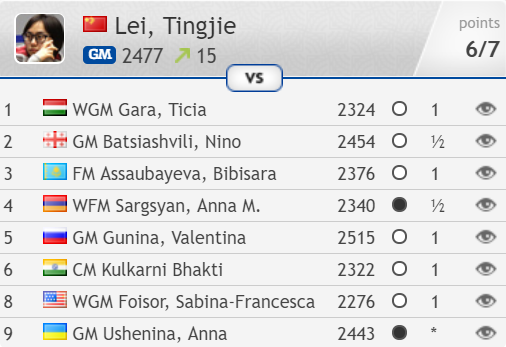 You can watch her, Ding Yixin and team captain Yu Shaoteng talking to Yannick Pelletier after winning gold:

Behind China are Russia (13 points), Ukraine (12) and Georgia (11). Again the last-round pairings heighten the suspense, since we’re going to see Ukraine-China and Georgia-Russia.

Follow all the action from three hours earlier at 7:00 CET, with Evgeny Miroshnichenko and Anna Burtasova commentating in English while Sergey Shipov commentates in Russian: Open | Women