Vladimir Fedoseev takes a half-point lead into the final day of the World Rapid Championship in Riyadh, but the stars of Day 2 were 48-year-old Vishy Anand, who found a beautiful mate against Luke McShane and took down World Champion Magnus Carlsen, and 15-year-old Andrey Esipenko, who annihilated Sergey Karjakin with a sumptuous attack. In the women’s section Ju Wenjun looked in trouble after four draws but turned around her last round game to win and also take a half-point lead into the final day.

Vishy Anand drew against the leader Vladimir Fedoseev, who he trails by only half a point | photo: official website

You can replay all the rapid games in the open section using the selector below – click on a result to open the game with computer analysis or hover over a player’s name to see all his results:

For a second day in a row Vishy Anand delighted his fans, this time not with brilliantly executed attacks but with some great tactical vision at the key moments. He started slowly, realising only after his game with Pavel Ponkratov that 32.Rf1! instead of exchanging queens with 32.Qf1 would have been close to winning. In the second game, though, he more than made up for it as a complex struggle against Luke McShane ended in the sweetest of fashions. Vishy said, “I kind of had my heart in my hand when I saw it” of the winning blow, with Luke only spotting it after he’d lifted his queen and realised to his horror that there was no queen move that could save the day. He didn’t spoil the moment by resigning, though, and opted for 51.Qf3‌ to allow Vishy to execute the mate:

Svidler finally brought Carlsen's 4-game winning streak to an end, but it was Anand who would deliver a killer blow | photo: official website

Vishy then drew against the leader Vladimir Fedoseev before getting paired with Black against Magnus Carlsen, in the pairing of the tournament so far. Vishy was proud of his 29th move in a complex middlegame:

Here he found 29…Nc8! and what followed was all but forced: 30.Qxb5 Rxd5! 31.Bxd5 Rxd5 32.Qb4 Nd6. Vishy said that White is “already in some trouble”, though he noted the computer claims 33.Nf4 as a stone cold draw. Instead there followed a move that both players initially thought was only going to force a draw by repetition: 33.Nc5? 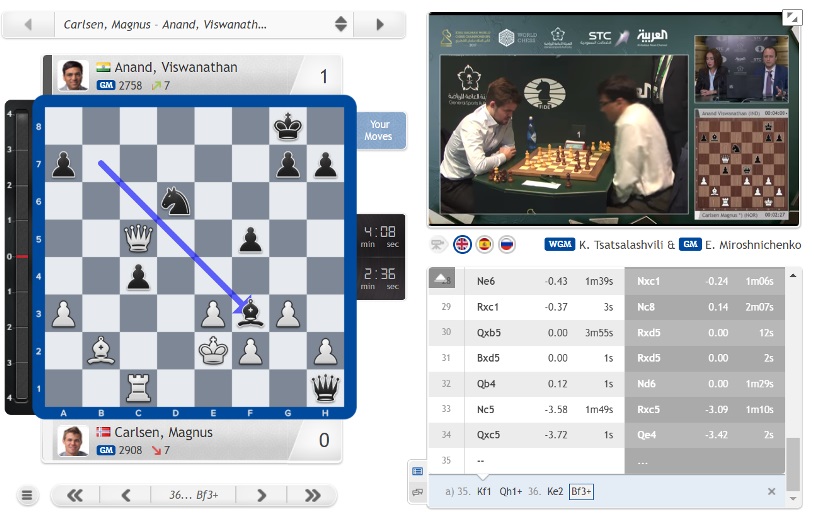 Vishy went on to draw his final game against Wang Hao, placing him half a point behind the leader going into the final day. Watch him talk about the day’s play:

15-year-old Andrey Esipenko is Russia’s youngest grandmaster (his title is yet to be ratified, so he’s still listed as an FM for now) and his exploits in Riyadh suggest he’s ready to start locking swords with the best. On Day 1 he beat Vallejo and Artemiev, while he started Day 2 by outplaying Vladimir Malakhov with a fine exchange sacrifice and going on to beat Sergey Fedorchuk. That was just a prelude, though, to a sensational victory over last year’s World Championship Challenger Sergey Karjakin. Some inaccurate play by Karjakin had already made Esipenko’s Caro-Kann look like a killer weapon before the youngster got to play a move so exquisite he might struggle to beat it in the rest of his career: 22…Qb3!!

And in glorious technicolor:

Of course you can’t take the queen without allowing an instant mate, but Esipenko got to demonstrate that he’d seen the whole idea: 23.bxc3 Qxc3+ 24.Bb2 Bxb2+ 25.Rxb2 Qc1+ 26.Rb1 Nc2+ and Karjakin had to give up his queen to stop mate.

It was bad pun day:

Esipenko was highly praised by Peter Svidler afterwards, though Peter first beat the youngster to remind him that it’s not going to be that easy!

The leader and the chasing pack

Going into Day 2 Vladimir Fedoseev was tied with Baadur Jobava for the lead, but that all changed when Fedoseev won their head-to-head clash, a thriller that Fedoseev admitted could have gone either way:

Here Jobava played the most natural move in the world, 55…Ne7+?, but 56.Kh7 simply helped White, since the black king is deprived of the g8-square and Nd7+ is a big threat. After 56…Bxf6 57.gxf6 the connected passed pawns were just too strong. Instead 55…d2! may only be a draw.

After this game Fedoseev never looked back, Jobava sank (almost) without a trace | photo: official website

Jobava never recovered, ultimately losing four of his five games on Day 2, though the fifth was sweet:

Fedoseev, meanwhile, also won his next game against Yuriy Kuzubov before ending with draws against Anand, Wang Hao and Svidler. Afterwards he put his success at least partly down to his “lucky” draw:

Those three players he drew against are all poised half a point back on 7.5/10, while the six players on 7/10 include a certain Magnus Carlsen. The World Champion stayed in contention by bouncing back from the loss to Anand to beat Ian Nepomniachtchi, though that game almost ended in Norwegian tears when Nepo was allowed to play 40…Be6!!

Black prevents a quick mate and after 41.fxe6 Black has an easy draw by perpetual check after 41…Qe1+. Nepomniachtchi couldn’t believe his luck to have been given the chance…

And indeed, after Magnus’ 41.Kf2 (41.Nf4 may be better) there was still a perpetual check. In the end, though, Nepo went astray and Magnus managed to take home the win after all. You certainly wouldn’t rule him out at only a point back and yet to have played the leader. The standings are as follows:

In the women’s section Ju Wenjun had a full point lead going in to Day 2 and could afford to draw her first four games of the day and still remain in the lead. The fifth was looking like a bridge too far, though, when Pham Le Thao Nguyen had a healthy extra pawn and close to a winning position. The Vietnamese player went astray, though, and allowed Ju Wenjun to turn the tables:

The women’s standings look as follows:

Alexander Grischuk was knocked out of contention by a loss to Yuriy Kuzubov, but Peter Svidler is poised to have a full say in the final outcome | photo: official website

Tune in for the final five rounds from 12:00 CET on Thursday:  Open | Women

You can also follows the games in our free mobile apps: