That was a headline we thought we’d only get to write with heavy irony, but after six instantly forgettable draws So-Karjakin exploded into life in 5-minute blitz with a heady mix of blunders and brilliant comebacks that really should have gone to Armageddon. The other tiebreaks ended in rapid chess, with Jan-Krzysztof Duda’s ambition backfiring against Shakhriyar Mamedyarov, while Alexander Grischuk found the perfect time to play a novelty against Yu Yangyi. It’s Mamedyarov-So and MVL-Grischuk in the semifinals. 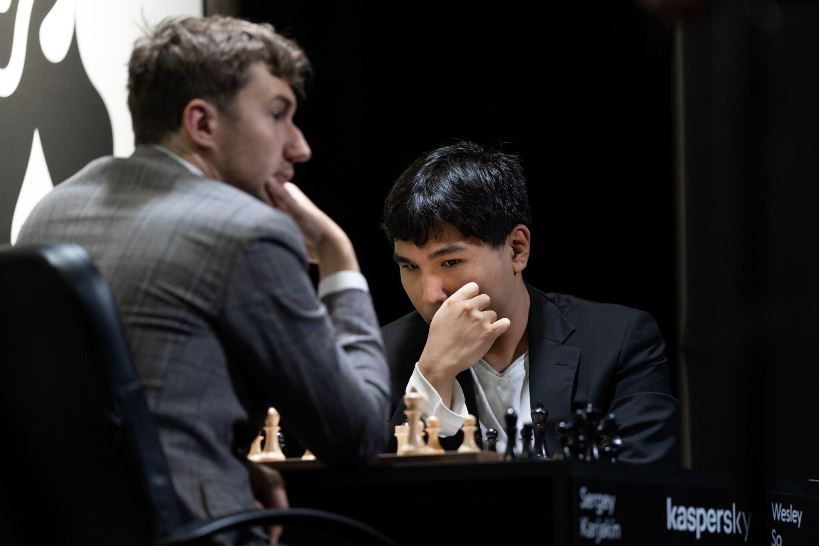 You can replay all the Riga Grand Prix games using the selector below:

And here’s the live commentary on the tiebreaks: 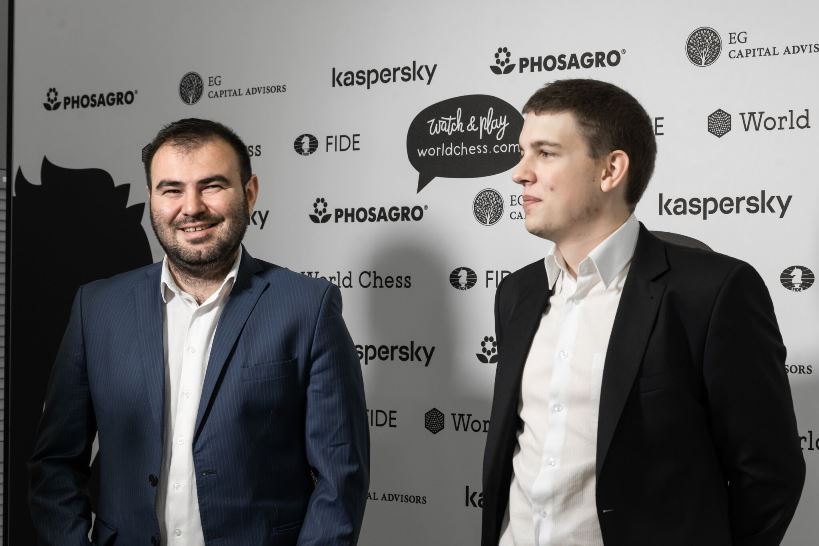 It was a match both players could feel proud of | photo: Niki Riga, official website

Shakhriyar Mamedyarov and in particular Jan-Krzysztof Duda had played the most consistently entertaining chess in Riga, and their head-to-head clash didn’t disappoint. After two enthralling classical draws their first rapid game was again a slugfest:

Duda confessed that he’d blundered Mamedyarov’s 20.Nxh7! here. 20…Nxh7 loses the rook on d8, so Duda was forced to give up his queen with 20…Rxd1 21.Nxf6+ Qxf6 22.Qxf6 Rxa1, but it turned out the position was still very playable for Black. When Shak gave up a couple of pawns – he couldn’t quite explain why afterwards himself! – it was Duda who had the winning chances, but in the end a draw was a fair result.

In the return game the young Polish player made absolutely no secret of his intentions when he played 8.Rg1!? 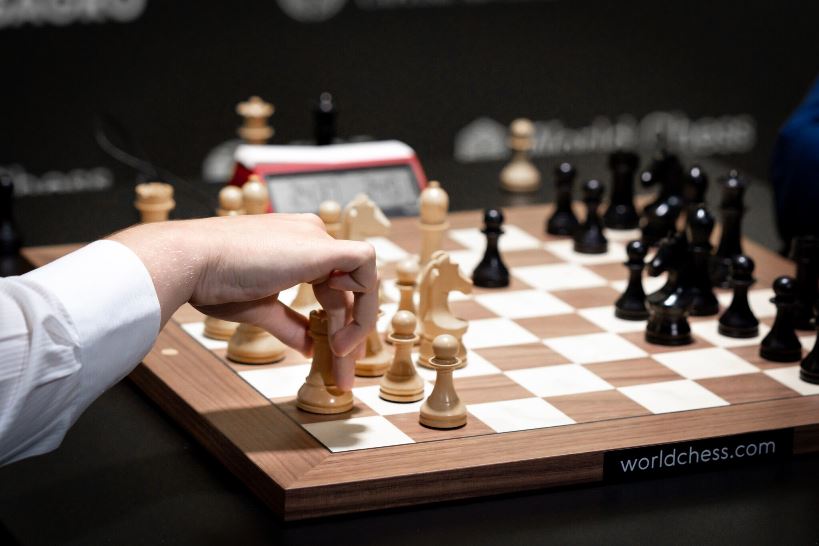 How would Mamedyarov feel to be on the other side of the board? | photo: Niki Riga, official website

Duda was playing in the style of his opponent, but had few regrets:

It was probably too much. It’s easy to say afterwards that it was a bad idea, but it’s also risky not to risk at all!

Mamedyarov recognised the imitation of his own play:

For me it’s very easy to play, because every time I play these lines, Rg1, g4 and attack, and after the game every time I check and the engine says, “very bad position, very bad attack!”

He noted a difference, however:

Duda’s attack on the black king never got going, while the white king soon found itself hopelessly exposed:

Watch the players talking after the match: 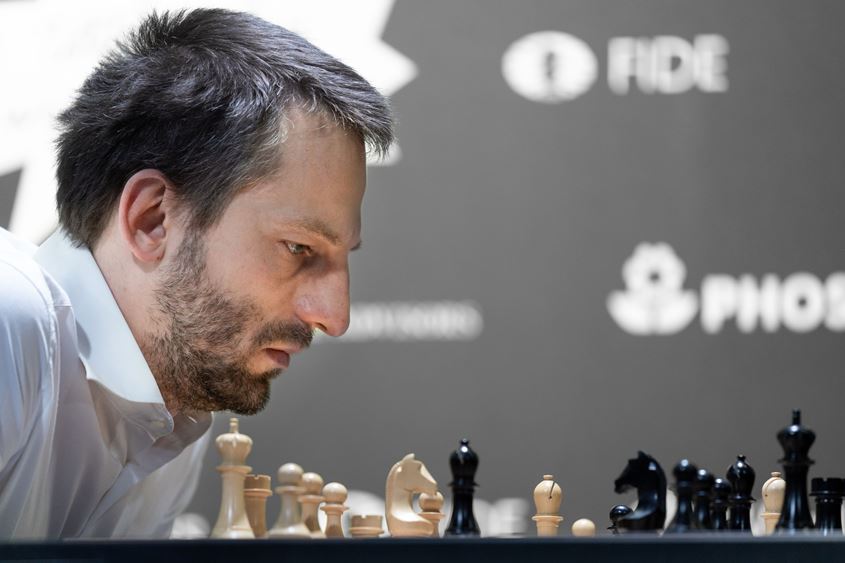 This had been a tense, hard-fought match without flashy attacking moves, and that pattern continued in the tiebreaks. The first 25-minute game would prove decisive, with Grischuk seizing the initiative for the first time with a subtle novelty. He followed an early queen exchange with 14.Bc7:

Grischuk later described that move as “an important novelty”, but he was critical of how he followed up, describing 16.h3 as “the most primitive” option. Yu Yangyi had good chances of holding, until he went astray after the probing 27.b3:

27…Nb4! was an only move, while after 27…Bb4? 28.Bxb4 Nxb4 29.bxc4 Rxc4 30.Ra4! there was no way to avoid material losses. The Chinese player fought on until move 62 but couldn’t stave off defeat. The return game was again tense, but Yu Yangyi never came close to getting the win he needed. 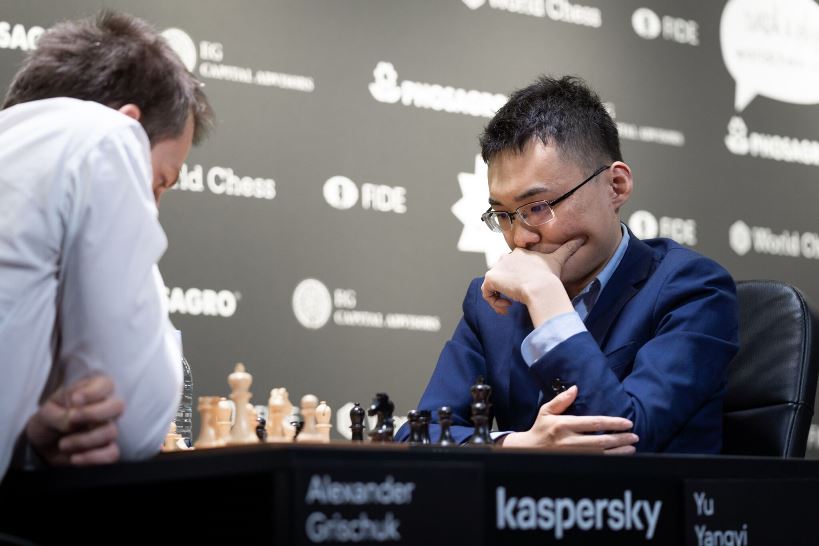 Yu Yangyi once again showed he's not out of place against the world's very best | photo: Niki Riga, official website

Alexander Grischuk is now the top scorer in the FIDE Grand Prix series, with 8 points for making the final in Moscow and 3 points so far in Riga, but he once again complained about only having a rest day before the final and not in the middle of the tournament:

Watch the players after their match:

For six games this match was an absolute snoozefest, with the games ending in 17, 19, 31, 27, 17 and 18 move draws, where essentially nothing whatsoever happened…

In 5-minute blitz, however, the dam finally burst, after Sergey Karjakin’s opening went too well!

I feel it’s a bit of a pity, because for the first time in this tournament I played very precisely in the opening, I remembered all the moves, and finally I lost. 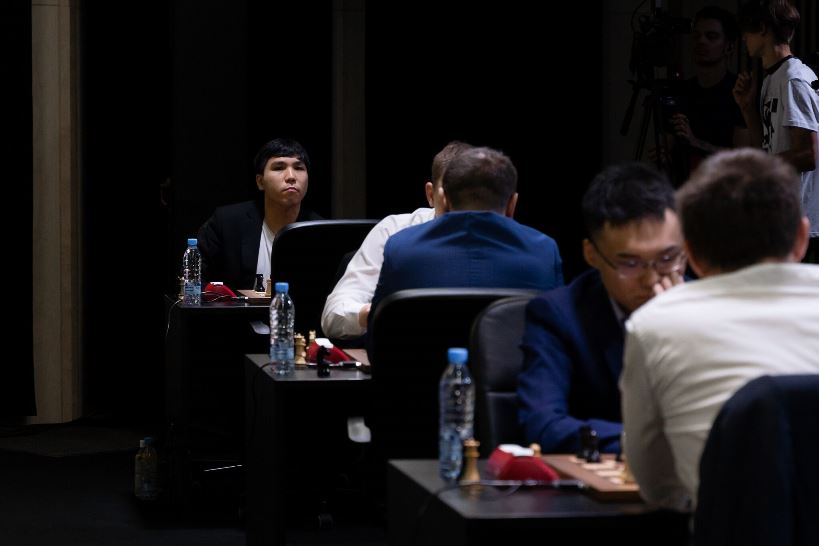 Wesley So's best qualities were on display after he found himself in a desperate situation | photo: Niki Riga, official website

Wesley missed 11.h3!, as played in Nepomniachtchi-Vitiugov in the 2018 Russian Championship, and instead blundered with 11.Nc3?, which ran into 11…Ne5!

It turned out that the bishop pair and two pawns are a decent match for the black queen, since White has no real weaknesses. Sergey said White’s position was “playable in blitz”, and it’s arguably even easier to play as White, though he could and should have picked up a pawn here with 16…Qb4!, when c4 can’t be defended. Instead he chose centralisation with 16…Qe5!?

The computer has Black on top all the way until move 30, but one blunder (30…Rd6?) was all it took for White to be crashing through, with the game ending with the brutal 33.Rc4+!

That meant Karjakin had to win with White to force Armageddon, but that looked like a very remove possibility after he misplayed the opening and allowed Black a crushing attack:

19…Bxh3! should have been the start of the end (soon the computer had Black almost 5 pawns better), but perhaps Wesley was thinking so much about only needing to draw the game that he not only spoilt his attack but allowed Sergey to take over:

This is the moment any hopes Karjakin had of qualifying for the Candidates Tournament via the Grand Prix vanished. Sergey could have played the straightforward 33.Bxf7+! Kh8 34.Bxe8, and it turns out that without a rook on the e-file Black has no hopes of a perpetual. It was even possible to brazenly take the f4-knight with his king, but instead he played 33.Rxf7? 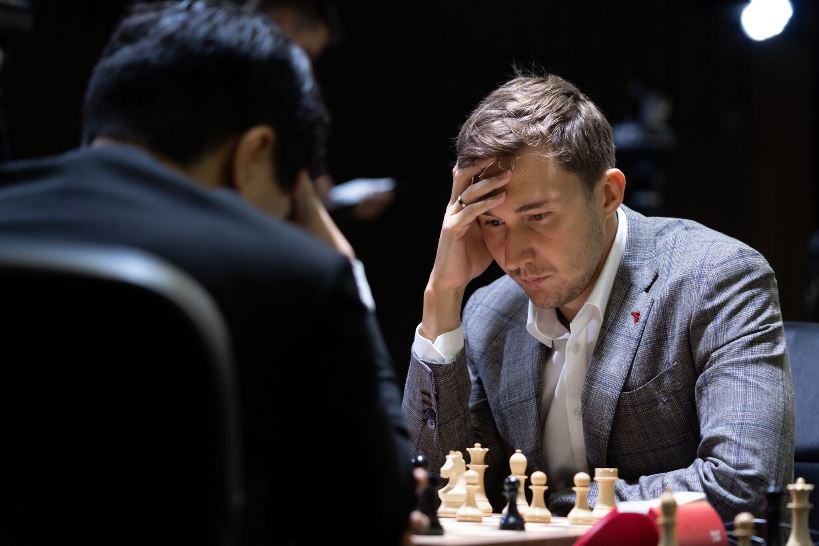 That looks like a knockout blow as well, but after 33…Qh5+! White can no longer win:

Watch the players after what genuinely ended up being a dramatic encounter:

That leaves us with Mamedyarov-So and MVL-Grischuk in the Riga Grand Prix semifinals, and as Alexander noted, there’s no rest day for the players (or rather, his opponent Maxime earned a rest day for himself by winning in classical chess!).

Don’t miss all the Grand Prix action here on chess24 from 14:00 CEST each day.