Maxime Vachier-Lagrave was the first player to reach the semifinals of the Riga FIDE Grand Prix after scoring the only classical win in the quarterfinal classical games. He beat Veselin Topalov with Black in a complex first game and then accepted a shocking draw offer on move 12 in the next to seal victory. The other matches go to tiebreaks, with only Mamedyarov-Duda so far having come close to producing decisive action. 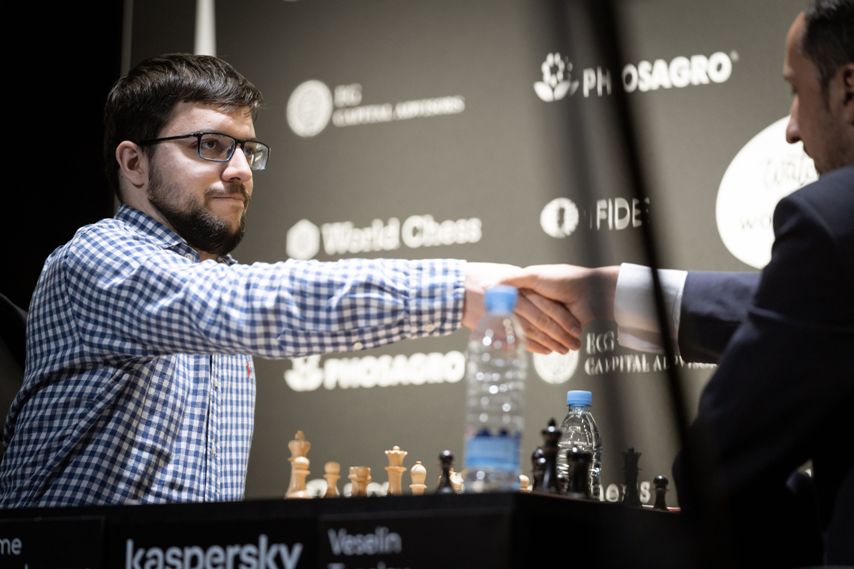 When your opponent has to win but offers a draw on move 12... | photo: Niki Riga, official website

You can replay all the Riga FIDE Grand Prix games using the selector below:

The classical portion of the Riga Grand Prix quarterfinals matched the 87.5% (7 in 8) drawing percentage of Round 1, with two of the matches never flaring into life. Expectations were frankly low for Karjakin-So…

…and, in that sense, we weren’t disappointed. The games finished in 17 and 19-move draws, and although Sergey commented, “I came to play chess”, it was clear no bridges were going to be burnt before tiebreaks. 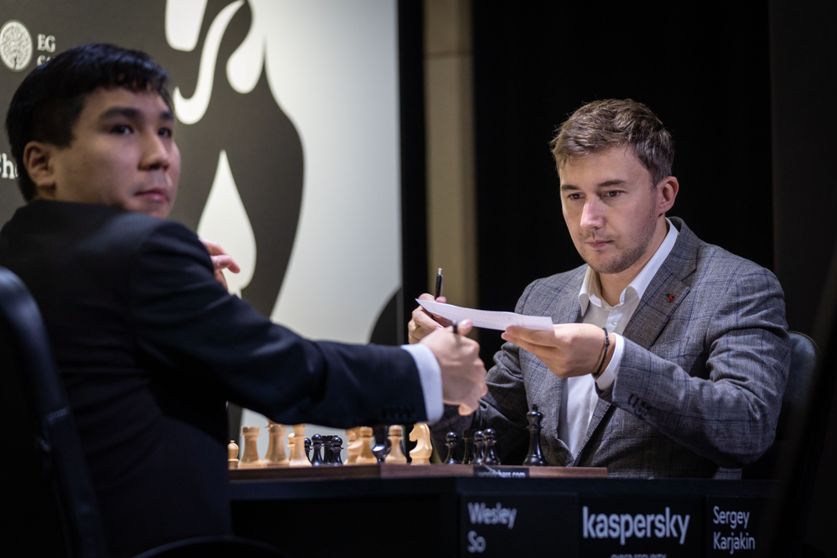 Grischuk-Yu Yangyi saw two fighting draws, though the action was tough to discern with the naked eye alone. Alexander Grischuk dug deep in both games to prevent an edge for his Chinese opponent getting out of control, and also didn’t feel he was in top form, comparing his play and memory to that of boxer Nikolai Valuev:

It was extremely difficult. There was a Russian movie with the boxer Nikolai Valuev the main actor, and it was called I think “Holes in the Head” – he’s a boxer, after getting hit. I was not hit, but I just cannot remember anything.

Duda-Mamedyarov saw a full-blooded struggle, with Shakhriyar Mamedyarov playing the memorable 14…f5!? in their first game:

Jan-Krzysztof Duda felt if he could both get a knight on e5 and a pawn on f4 he’d have a serious advantage, but instead Mamedyarov managed to play f4 himself and ultimately the position remained closed and ended in a 34-move draw. 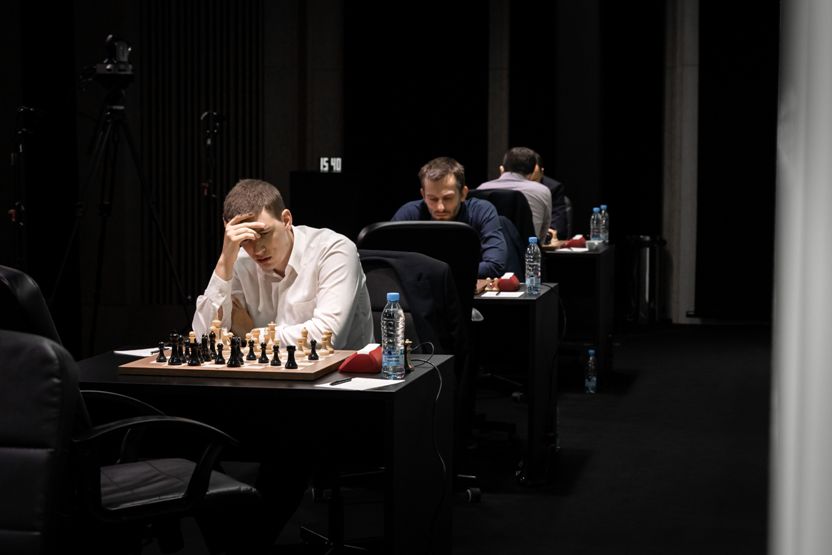 Duda has been working flat-out in every game so far | photo: Niki Riga, official website

The return game was just as exciting, with Duda caught in a line he didn’t know well and confessing, “it’s my first game when I wasn’t better at any moment in this Grand Prix”. He copied Mamedyarov’s f5-break, but this one was even riskier:

Once again, however, it ended in something approaching a fortress.

That brings us to Topalov-Vachier-Lagrave, where you could have no complaints about fighting spirit in the first game, with Veselin Topalov coming ready to play against MVL’s Najdorf:

In the end the f4-knight was sacrificed where it stood, but the position appeared to be dynamically balanced until Maxime finally took over after the time control. Laurent Fressinet takes us through an impressive win by the French no. 1:

And here’s Maxime after that game:

That meant the return game was must-win for Topalov if he wanted to take the match to tiebreaks, but given how it went you might legitimately ask, did he? Veselin had ended his interview after a shock win over Hikaru Nakamura in the previous round by responding, “I just don’t care that much!”, to the prospect of facing Maxime.

In the game he was surprised by 4.Ba4 by Maxime, although that had been played by Nakamura against MVL in the Croatia Grand Chess Tour just 12 days earlier. Veselin commented, “There are so many tricky new moves, and I don’t follow trends”. That culminated in the following position, where Veselin offered a draw: 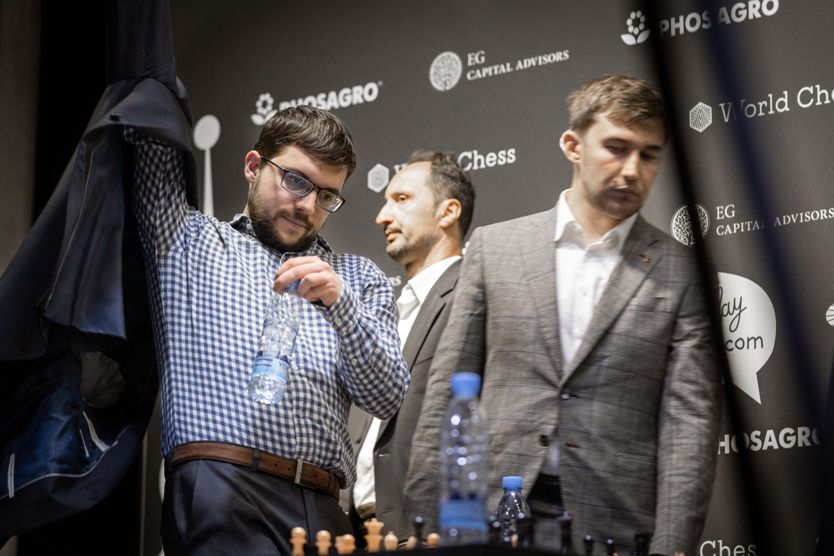 The position is better for White, but to throw in the towel in a match with so much material left on the board is almost unheard of. One of the few comparable examples is how Alexander Morozevich resigned the following position (he had White) on move 12 of a must-win game against Alexander Grischuk in the 2011 FIDE World Cup:

Grischuk said at the time he’d never been so shocked by anything in chess, though he later backtracked somewhat, acknowledging that there really wasn’t too much White could have done. Here’s Topalov on his decision:

Of course you could have conspiracy theories for what had happened!

In any case, that means Maxime is through to the semi-final, where he’ll face Grischuk or Yu Yangyi, while the remaining three matches will be decided in Wednesday’s tiebreaks. This time excitement is guaranteed.

There's also action elsewhere in Riga, with the Tal Memorial Rapid (and then Blitz). You can find the games here:

David Navara and Nikita Vitiugov switched straight from playing in the Grand Prix to this event, with a loss for David (in a sequence of six wins) leading to a memorable post-mortem!

Don’t miss all the Grand Prix action here on chess24 from 14:00 CEST each day.