However much anyone talks about the unpredictability of rapid chess, or the Swiss format giving a chance for unexpected names to shine, the cream still rises to the top! With one day of the World Rapid Championship in Dubai remaining world no. 1 Magnus Carlsen has taken the sole lead on 8/10, while world no. 2 Levon Aronian's four wins moved him into clear second place on 7.5/10. Former speed chess World Champions Viswanathan Anand and Alexander Grischuk remain unbeaten in the group of players another half point behind. 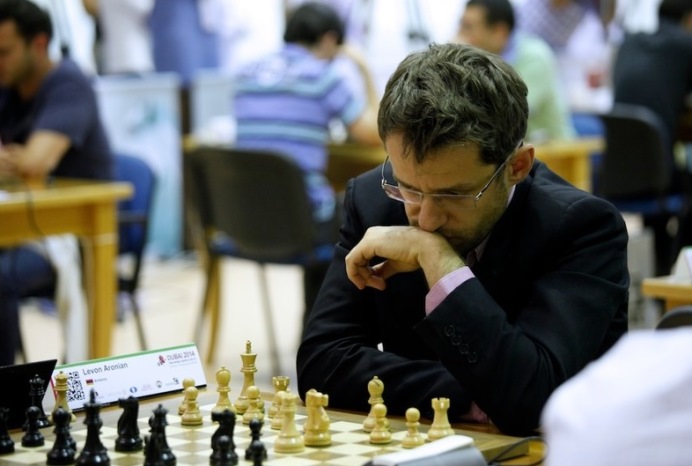 Levon Aronian started the World Rapid Championship with a loss, but his 4.5/5 was the performance of Day Two | photo: Anastasiya Karlovich, official website

After the first day of the Rapid World Championship in Dubai we had three leaders, Ian Nepomniachtchi, Sergey Karjakin and Fabiano Caruana, but between them they only managed two wins on the second day of the event, leaving the door wide open for the chasing pack. Guys like Carlsen and Aronian don’t need to be asked twice – in fact, while Fabiano Caruana was talking about simply playing the event for fun (let's only half-believe him!) Carlsen’s approach is no doubt closer to that of the top tennis players. In an interview published on the same day in the Guardian John McEnroe talked about Andy Murray’s Wimbledon chances:


I won the US Open in 1979. When I lost to Borg at Wimbledon [in 1980] I looked at this guy – he had won it four times in a row, and that made it five – and I thought: ‘How the hell does this guy want it so bad?’ It taught me something. And Murray’s been taught by these experts, like Nadal and Federer. They just find something in the well. They want it more than you thought was possible.

Of course it’s not only deadly serious competition, as the official website’s video of the breaks between the games shows:

Vijay Kumar’s video also gives a wonderful impression of the atmosphere during the tournament:

So then, let’s get to the chess action! Many thanks to IM Lawrence Trent, who although not commentating on the event for chess24 picked out many of the highlights below: 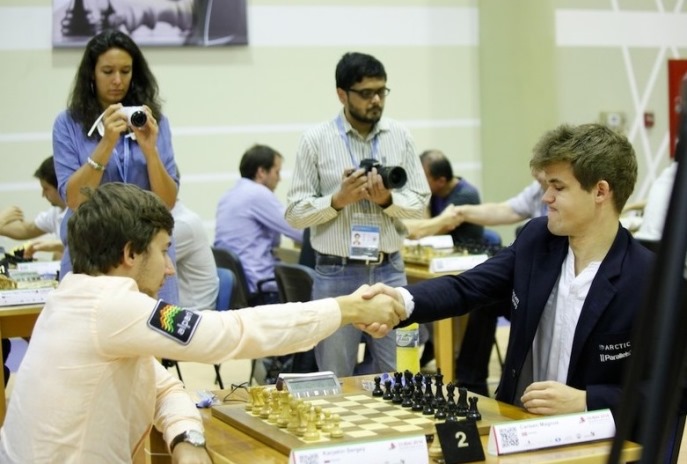 Tuesday started in spectacular fashion with only 6 draws in the top 30 match-ups. One of those was between Sergey Karjakin and Magnus Carlsen, but it was anything but quiet! 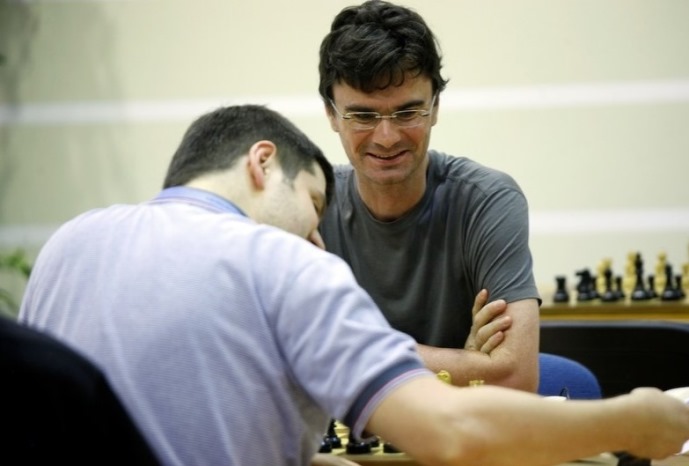 Loek van Wely had the last (and perhaps even the first!) laugh against Peter Svidler | photo: Anastasiya Karlovich, official website

Other notable games included a fine crush for Morozevich against Polgar and a neat trick from Anand to claim a full point against Efimenko. Peter Svidler, meanwhile, posted an early contender for blunder of the day with 31…Qc5? against Loek van Wely:

There was fine sacrificial chess in Caruana-Karjakin, Anand-Movsesian and Tomashevsky-Radjabov, but all the games ended drawn, as did World Champion Magnus Carlsen’s encounter with his second Laurent Fressinet - something they have a history of!

The round lasted almost 1.5 hours due to another draw and the perils of increments! The official commentator was struggling:

The players also had to keep themselves amused:

This was the round when the leaders or wannabe leaders began to make their move. Levon Aronian, Peter Svidler and Magnus Carlsen all won their final three games starting from this point.

…but 28…Nxd5! emphasised how desperate White’s position was. One of the fiercest battles of the round was between two Russians, Alexander Grischuk and Evgeny Tomashevsky:

Here Grischuk played 12.Nxe5! dxe5 13.Bxc5 and although that was very far from the end of the story he went on to grind out a win. At the end of the day both Tomashevsky and Grischuk would be in contention one point back on 7/10, with speed-specialist Grischuk another of the rare unbeaten players. 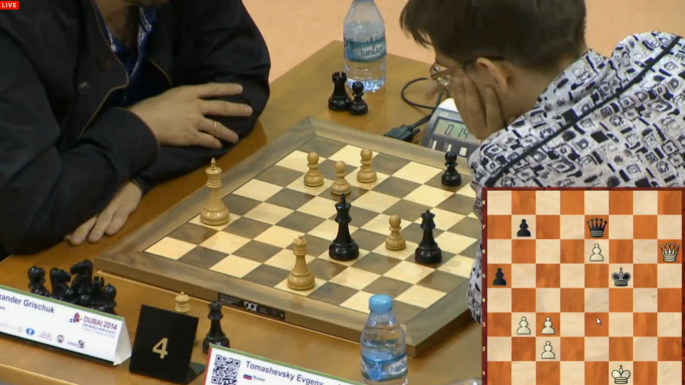 Of course the game didn't pass without a time trouble scramble for Grischuk, who was playing on his increment at the end

The big match-up of Round 9 saw Levon Aronian defeat Sergey Karjakin in the line of the Berlin Defence with which Carlsen had lost to Caruana in Shamkir. Karjakin’s pawn sacrifice ultimately proved too ambitious.

Carlsen, meanwhile, was in the groove against another Armenian, as he positionally outplayed Sergei Movsesian:

He finished with the pretty Nd1-e3-f1-g3 knight manoeuvre to win the h5-pawn and the game. Carlsen joined Caruana in the lead as the Italian could only draw against Grischuk.

Vishy Anand, meanwhile, claimed his second win of the day as his Indian compatriot Pentala Harikrishna badly underestimated the white a-pawn’s march up the board. 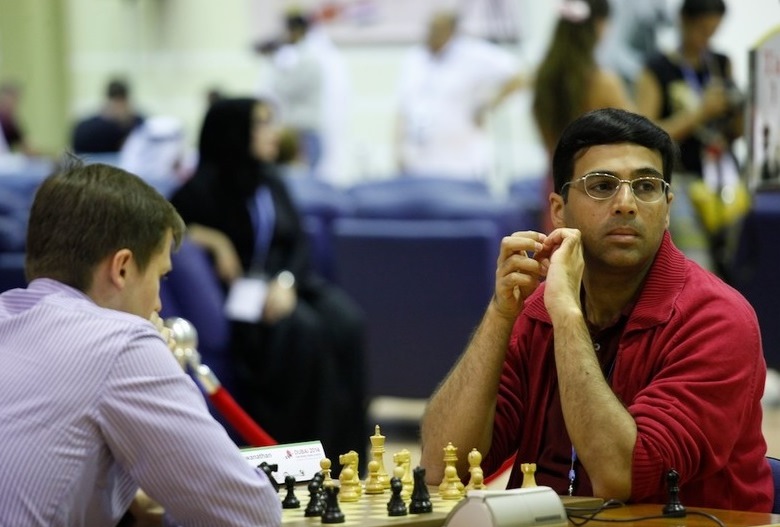 Vishy has quietly been keeping within striking distance of the leaders - here during his win against Zahar Efimenko | photo: Anastasiya Karlovich, official website

It really doesn’t get much better than this, as the top four games in Round 10 featured no less than seven of the world’s top eight players on the live ratings! All eyes were on the clash between the joint leaders, Magnus Carlsen and Fabiano Caruana, and Spanish IM David Martinez has analysed that crucial encounter for us:

1. d4 d6 2. e4 ♘f6 3. ♘c3 e5 4. ♘f3 ♘bd7 The Philidor is one of those defences that occur at an elite level more in rapid games than in classical chess. It cedes some space to White but Black's rearguard is comfortable with no weaknesses.

5. ♗c4 ♗e7 6. 0-0 exd4 Black usually prefers to maintain the tension with c6, but Caruana's choise is also, of course, playable.

20. ♕h3⁈ This leads to a slightly better ending, although with precise play Black should hold.

25... ♕d5 , centralising the queen, defending b7 and putting pressure on b2 would have maintained good drawing chances.

The other decisive game saw Levon Aronian defeat Hikaru Nakamura, with the American lamenting a false step in the opening:

That shouldn't detract, however, from the Armenian's fine endgame play, as he neatly judged he could afford to enter an opposite-coloured bishops ending.

So at the end of day 2 there are very familiar names at the top, though you wouldn’t completely rule out anyone down to 6.5/10:

Magnus Carlsen is in the driving seat and for good measure now tops the live rapid ratings (former no. 1 Nakamura has fallen to no. 4), but there's still a lot to play for. 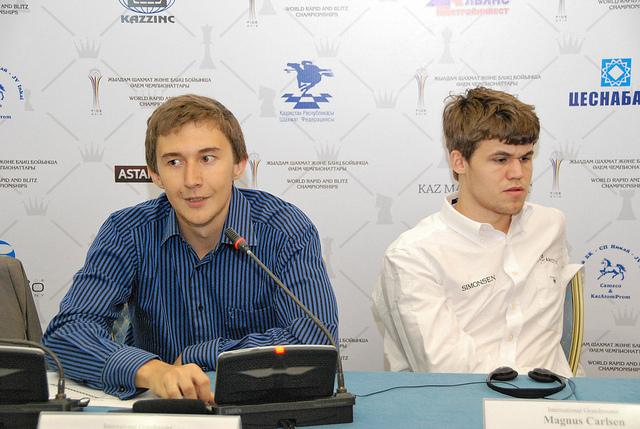 As evidence that anything can happen take the World Rapid Championship in Astana, Kazakhstan two years ago. Magnus Carlsen ended the second day by beating his closest rival Sergey Karjakin to lead by 1.5 points with only five rounds to go. It was still a 1.5 point gap with four rounds to go, but then defeats to Ivanchuk and Grischuk and a 4.5/5 finish for Karjakin saw the Russian take the title, with Carlsen lucky to hold on to silver (as I reported back then).

The third and final day in Dubai opens with a bang as Magnus Carlsen has the black pieces against second-placed Levon Aronian! You should be able to watch the official website’s livestream below: