India are now 2nd seeds for the Chess Olympiad that starts on July 29th, with Magnus Carlsen's Norway 3rd, after Azerbaijan plunged from 2nd to 6th when Teimour Radjabov dropped out of the team. Vasif Durarbayli criticised his colleague, but Teimour now cites the after-effects of a COVID infection. 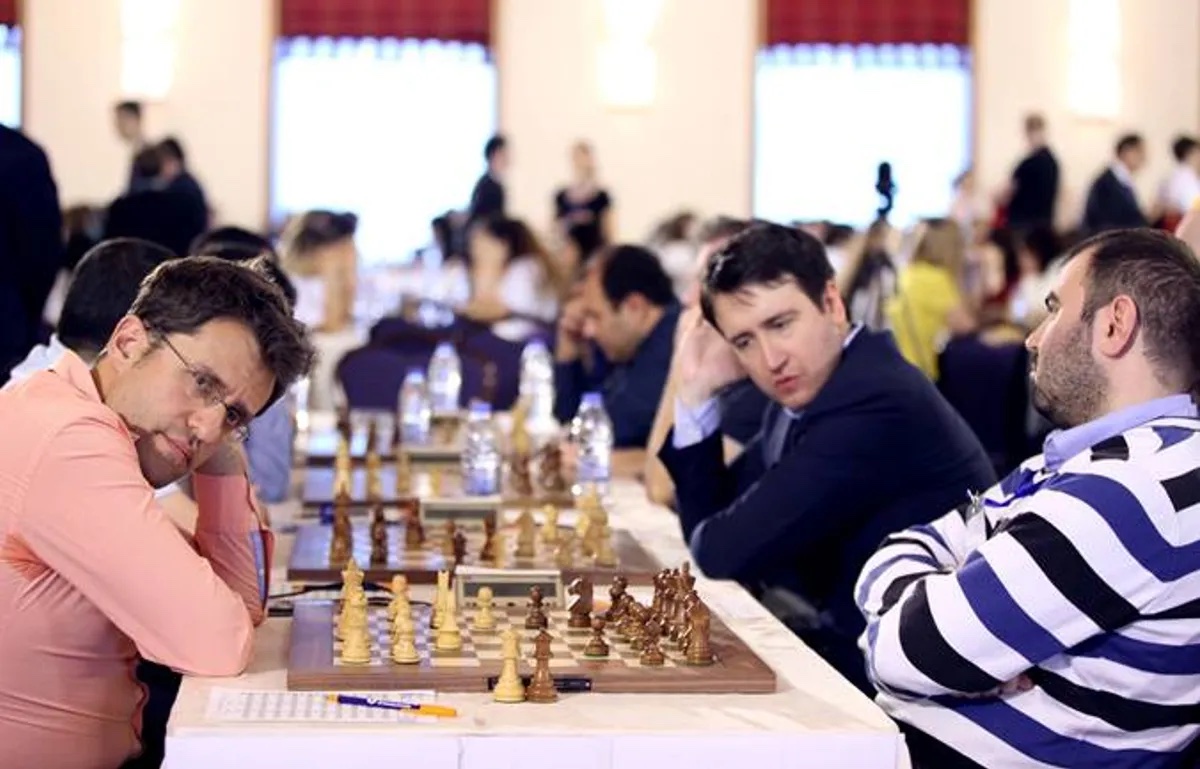 The USA were already huge favourites to win the 2022 Chess Olympiad after Russia were banned and China withdrew over pandemic travel issues, but now they're the only team with an average rating of their top four players above 2700. Azerbaijan were 2nd seeds and rated 2705, but only if Teimour Radjabov was playing. 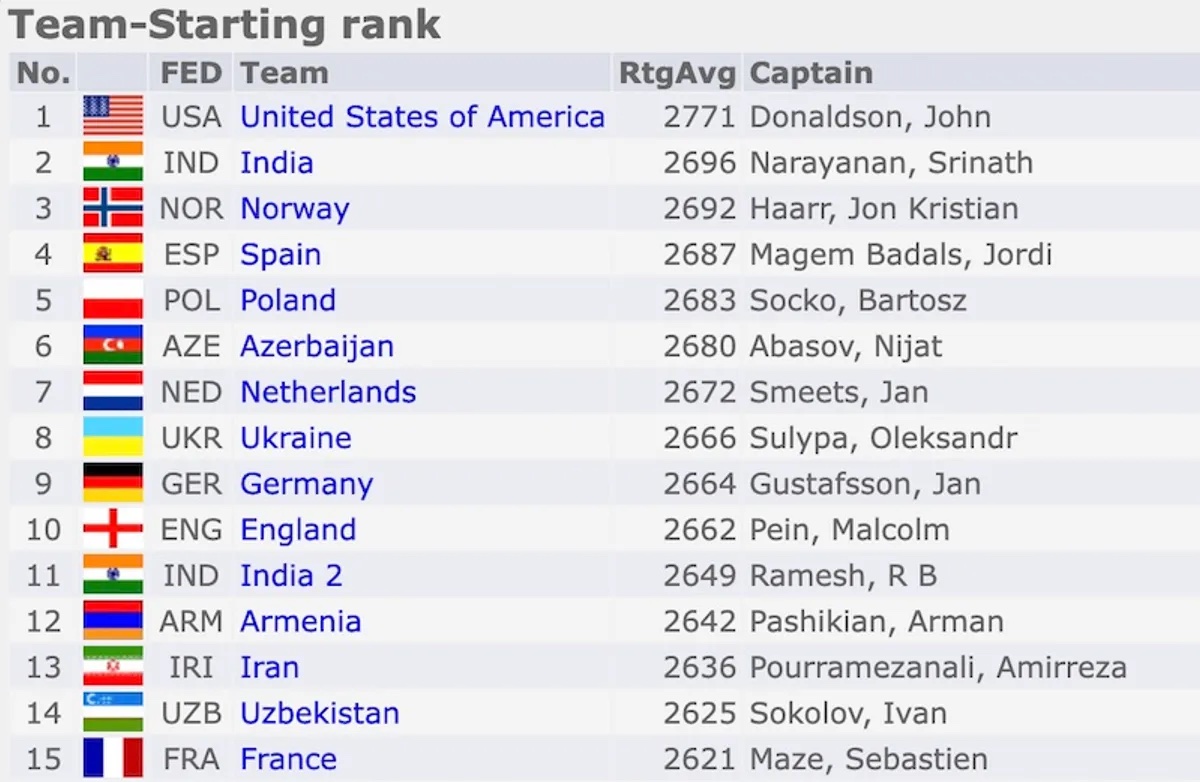 Teimour's withdrawal suddenly means that Azerbaijan are ranked only 6th, while hosts India are favourites to take silver medals, and Magnus Carlsen's Norway are now favourites to finish on the podium. 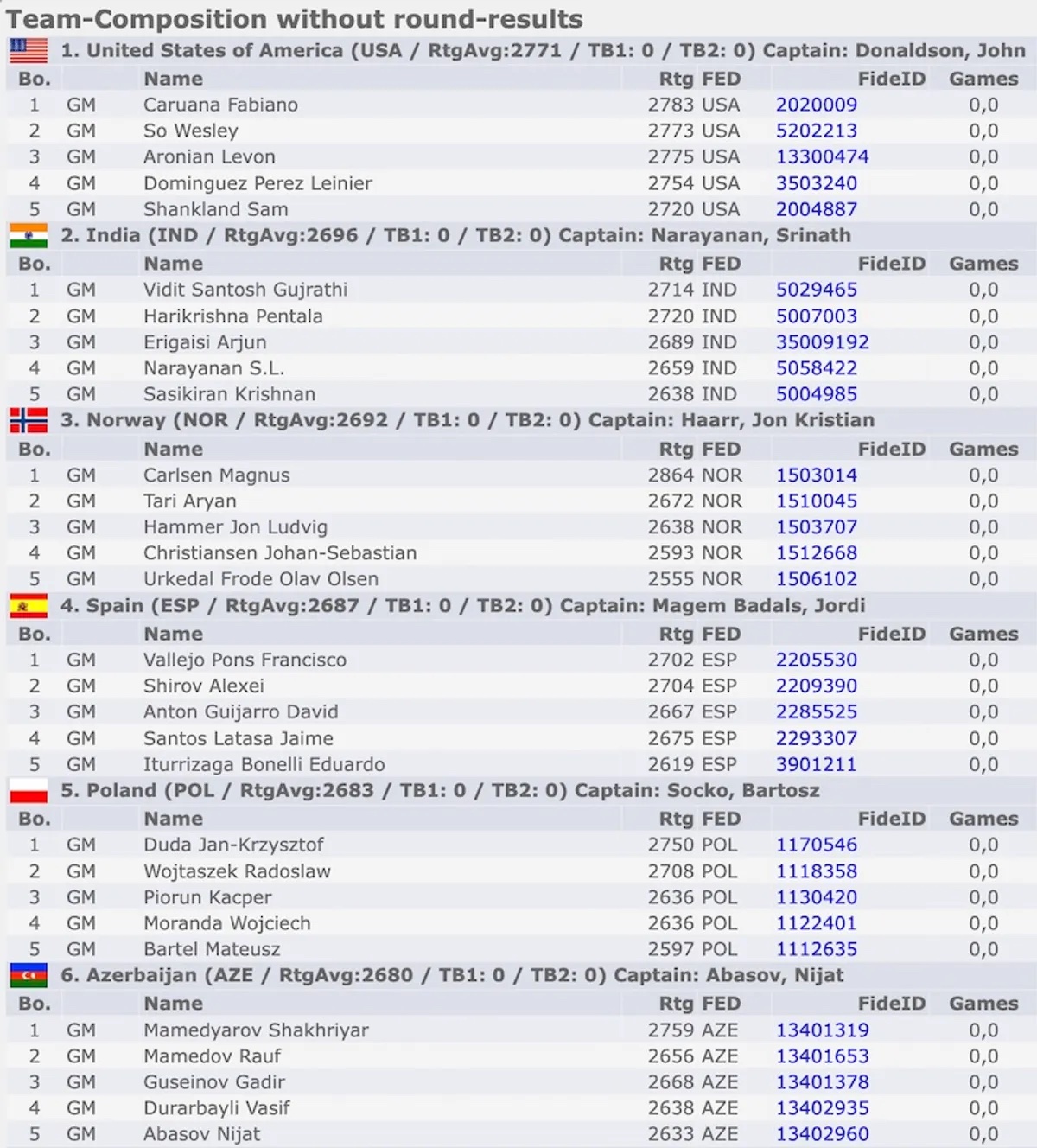 Teimour's withdrawal proved controversial, with teammate Vasif Durarbayli posting the following yesterday in Azerbaijani on his Facebook page (as picked up by Russian Azerbaijan media).

For a long time I didn’t write about this in order not to spoil relations with my teammates. There was a chance that Teimour would play, but it didn’t happen. We’ll soon find out how they’ll explain it.

Azerbaijan this time had a great chance to win Olympiad medals. In principle, the chance still hasn’t gone, but we have to speak frankly. Azerbaijan doesn’t have a chess player who could replace Teimour. His absence will significantly reduce our chances of medals.

Here I’d like to note that on Radjabov’s development, in order for him to reach such a level, millions were spent by the government. It’s a debt that can’t be repaid, but the condition should at least be playing for the national team. After all, we’re playing here for a common cause.

Apparently Radjabov, in whom millions were invested, doesn’t feel any moral responsibility. In 2019, complaining of tiredness, he left the team halfway through. In 2021 he played eight lifeless games that all ended in draws. Now he’s completely refused. Knowing all this, and a lot more I can’t talk about, I’ve got a basis for speaking about this.

For me, Radjabov should play in the Olympiad at all costs, even if he was up to his elbows in blood. And I condemn him for not doing that.

Teimour Radjabov dropped out of the FTX Road to Miami complaining of sickness after his loss to Anish Giri on Day 2 meant he'd started with one draw and four losses. 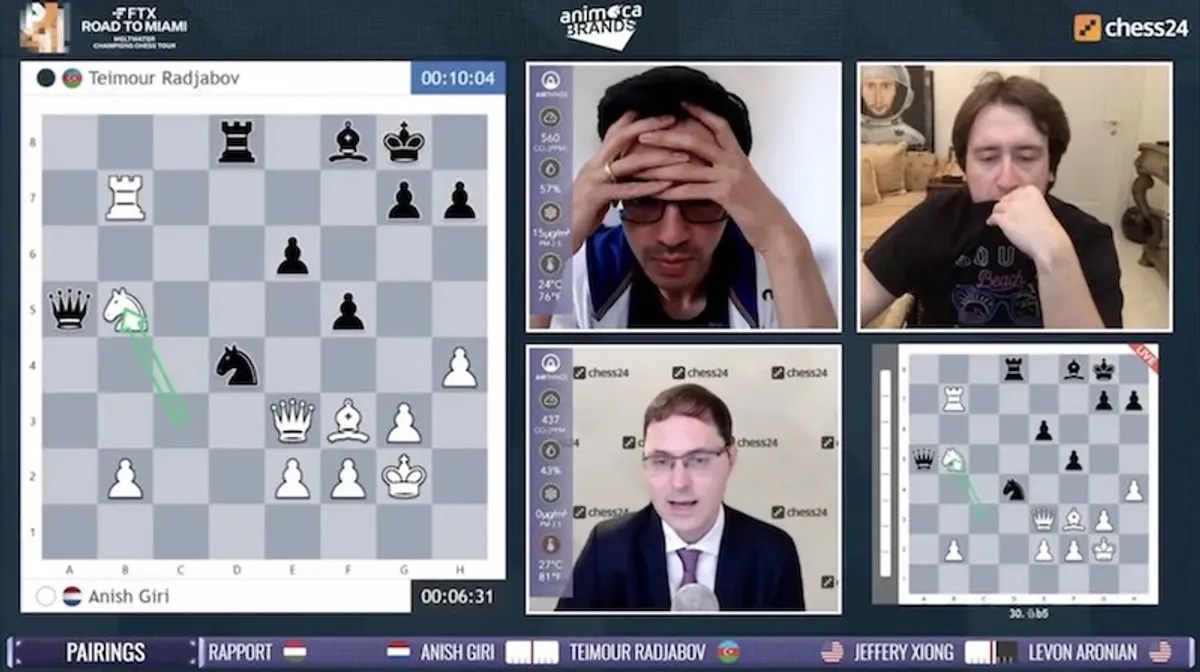 Teimour has now explained his withdrawal from the national team as the result of COVID that he contracted after returning from the Candidates Tournament. In a long post reported by Azerbaijan media Teimour outlines his achievements while representing Azerbaijan, ending:

In 2021, I defeated Levon Aronian in the final of the Airthings Masters tournament of Magnus Carlsen's "Champions Tour" and became the winner of the tournament. In the final tournament of the "Champions Tour" I took second place in the prestigious competition, after the World Champion Magnus Carlsen. In 2022, I won a bronze medal for my country by taking third place in the Candidates Tournament in Madrid, where eight of the best chess players competing for the world chess crown took part.

The Candidates Tournament, which is the main tournament in the life and career of any professional chess player, was, as expected, the most difficult test for me, and completely destroyed my physical and psychological health. Also, after returning from the tournament, I contracted COVID, which was complicated by high fever, severe cough and post-COVID syndrome. In the current state of my health, I cannot benefit the national team, I have to recover for a while. Let me inform you that doctors have forbidden any psycho-emotional stress by recommending outpatient treatment for several months. I have to recover for a while. 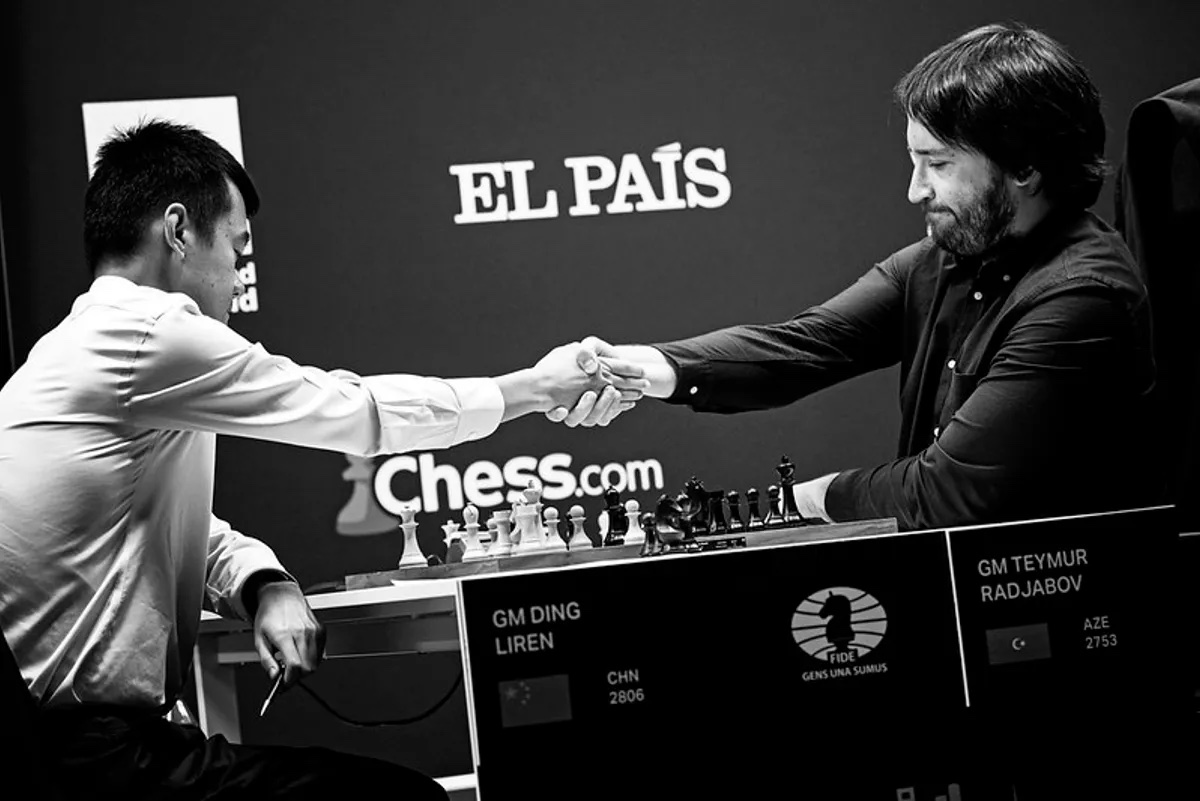 Once again we wish Teimour a swift recovery.

The Azerbaijan team, meanwhile, stilll have the potential for medals, but the USA's position as top seeds has strengthened yet further. There's just one week to wait until the action kicks off on Friday 29th July in Chennai, India.