He's no Grandmaster, he's not even a Candidate Master and David Kramaley hasn't even written a chess book (yet).

But here is a man who, at the age of 32, has still managed to have a profound influence on the game.

David is the co-founder of Chessable, the unique learning platform that has all the big names in chess flocking to it right now. Chessable is also, in case you haven't noticed, the name sponsor of the Chessable Masters - leg three of the Magnus Carlsen Chess Tour. 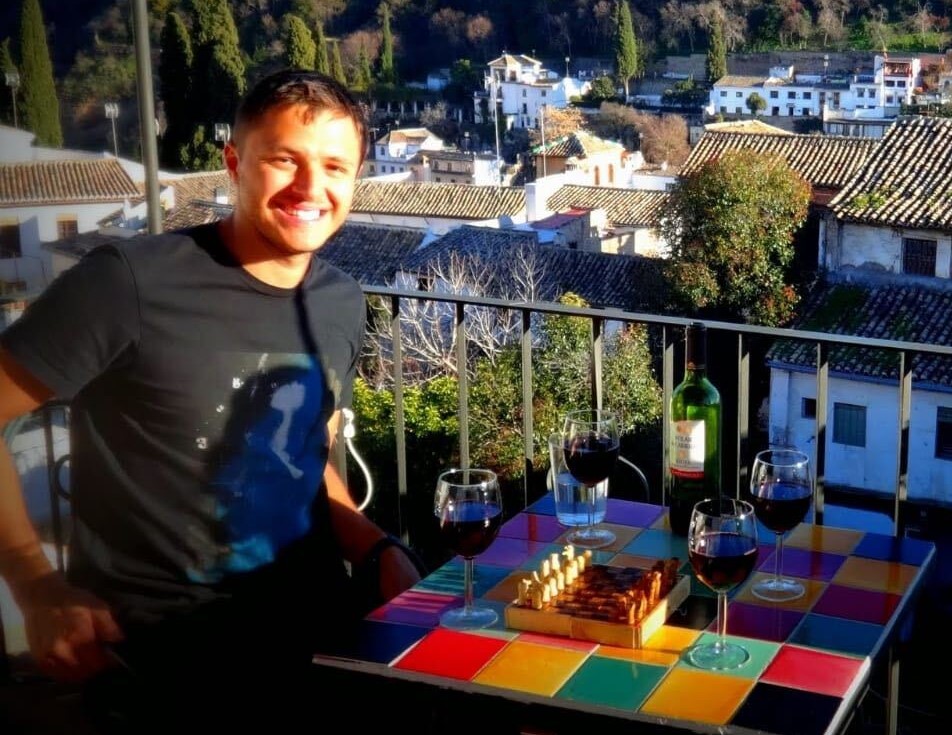 David came up with the idea of creating Chessable after developing a program in 2013 to help his own game. As a non-Grandmaster, he wanted a way to memorize initially his openings and then other areas of chess.

By the end of 2015, David had hooked up with IM John Bartholomew to co-found the start-up and develop David's idea into a fully-fledged learning website.

Fast forward to September 2019 and Chessable had joined chess24 and PlayMagnus. Today the outfit that was started by David and John as a boot-strap start-up now employs nearly 50 people.

David's story and the story of Chessable is a rare example of business success in the chess world. But from the beginning, David's aims have never just been about business.


David is passionate about learning, self-improvement, and helping others improve themselves - and that is not just confined to the game of chess.

His brainchild Chessable, which was born out of his study of the science of learning at university, has now trained hundreds of thousands of players all around the world to play chess better.


Chessable is also a thriving community of learners bound together by a common interest in improvement.

Here is David in his own words:

I've always enjoyed competitive games/sport. I played a lot of poker and eventually decided I want to get into a game with a bit less of a "luck" element. My dad had taught me the basics of chess when I was a child so I picked it up again a decade ago and played casual games against a friend. My first games online my rating was swinging between 900 and 1200 quite a lot.

Playing for the Bristol University Chess Club while doing my Masters there and contributing to the team winning by beating an opponent 250 Elo points higher than myself.

I also have a chess memory I'd like to share too though which has stuck with me. I took a trip to Russia and played chess in the park. I was comfortably winning a piece up against this random guy, aged about 70 plus. He was cool the entire game... all of a sudden, we are in an endgame and I am a piece up. I start to feel comfortable myself. Move by move his position improves and mine worsens. Somehow, he wins a piece back due to the pressure he puts on me. Then he wins. This taught me the importance of continuing to play your game of chess until you lose, rather than resigning. A very very great lesson I am grateful for to this random person I never spoke to again but will remember for the rest of my life. 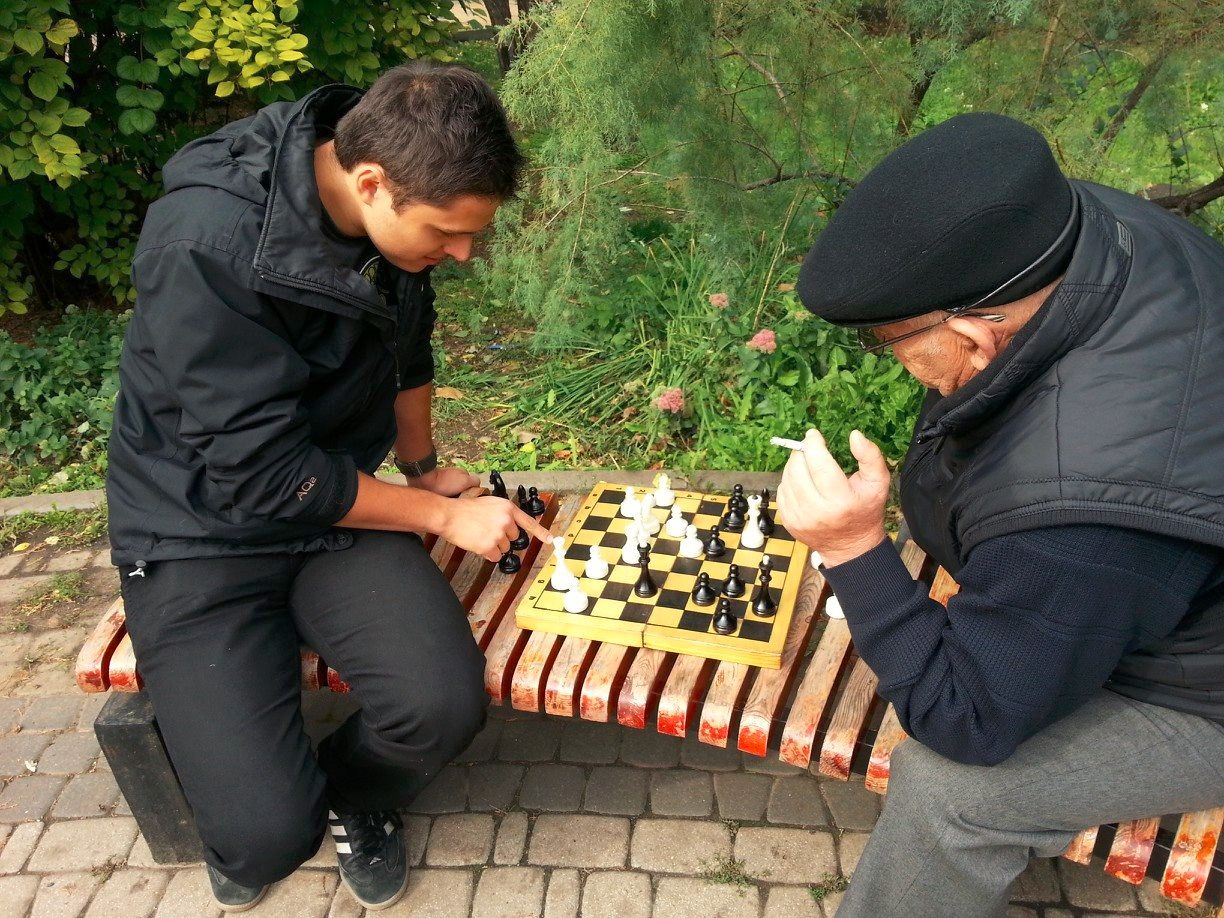 David and the random guy

Chess is a game that teaches you many skills that may be applicable in real life - from time management, to opponent's psychology, to planning and strategy and the consequence of decisions. I think it is a great game that one can be proud of getting better at.


Who is your favourite player and why?


I'm going for a curveball here - the immediate choice is Magnus - for obvious reasons, but the second player that popped into my head is actually Olegas (Oleg Krivonosov) and only for a single reason; the way he brought out the best and the worst in ChessExplained, one of my favourite streamers. Every time they played you could see how much chess means to someone like Christof, who put his heart and soul into the game just because of the love of the game. A healthy rivalry is not only fun to watch but also great to partake in. I have my own personal chess rivals where losing a game hurts a lot more than a normal game. All in good fun though. So actually, in a way, you could say my favourite player is Christof... hmm.


Sorry, I'll have to go Chessable course here... 100 Endgames You Must Know. I spent weeks implementing this myself into the site, doing "things that don't scale" as proof of concept. I also studied every single exercise in this course. Some of the stuff is way over my head and play grade but some of it has been very useful indeed.

Work on your mindset. Failure(s) are part of improvement. Don't be afraid to fail, get yourself out there as much as possible. We learn by practice and repetition; and eventually, we turn those failures to success.


I won't pass judgment here, sorry! All different kinds of advice are applicable to different people at different stages of their game.


What do you think the biggest issue in chess is at the moment? For example: getting sponsorship, getting OTB tournaments back under-way, the participation levels among women, elitism?

Increasing the participation of women and lowering their drop out rates. I recently supported the stream by Alexandra Botez and Susan Polgar to raise funds for this very cause. I think we need to do more of that and try and figure out how to get more girls and women playing this wonderful game.


Definitely seem to have stepped it up a notch. Let's hope it continues!

I don't think that far ahead ;-) Magnus to reign supreme for many years to come (as long as he keeps letting me beat him at football - not the fantasy kind).

Magnus - of course. Anish said it himself (right?).

A deeper dive into how psychology may shape you as a chess player and also how it can affect every single game and move. However, I know amazing people like Jonathan Rowson are already on that so I will pass and let them do it :-)