IM Anna Rudolf (2325 FIDE) is one of the great communicators in chess.

Having taken a backseat from tournament play three years ago, she has now amassed a mountain of experience as a commentator and analyst.

Anna fronted the official coverage of both the 2016 and 2018 World Chess Championships, she has appeared regularly as a commentator for the Grand Chess Tour and is a familiar face on chess24. 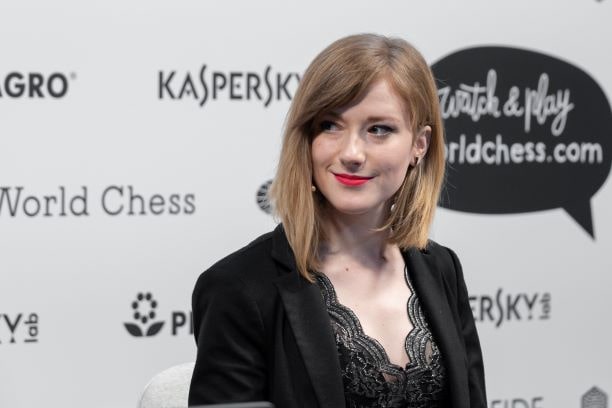 The 32-year-old, who now lives in Cork, Ireland, is co-commentating on the Chessable Masters.

Watching someone so able to break down complex ideas and concepts so everyone can understand them, it is easy to forget how strong a player she is.

She has combined media work with an active presence on social media and a hugely-successful Twitch stream. More recently "Miss Strategy" has turned her talents to authoring a new series on Chessable titled Anna's Anatomy of the Attack.

Here is Anna in her own words:


My best performance was also the one that got my name into major media outlets around the world like the New York Times and New York Post - sadly not for how well I played at the tournament (Vandoeuvre Open 2007) but for how strange the story was: being accused of cheating with an engine in my lip balm.


It's a truly magical game that can be played by anyone at any age, and teaches us important life skills such as strategic thinking, planning ahead, taking responsibility for our decisions and actions, respecting the game as much as our opponent, and being graceful about victories and defeats alike.


Who is your favourite player and why?


Judit Polgar. She has been my role model ever since I was a kid not "only" for everything she achieved at chess but also for the incredible person she is in life as well. She is genuine, kind and whole-heartedly passionate about every project she is involved in - a truly inspiring figure I'm lucky to have in my life as a friend.


100 Endgames You Must Know, written by a former coach of mine, GM Jesus de la Villa.

To not be afraid of making mistakes - it's part of the learning process as long as you accept them and grow from them!


Perhaps the out-of-proportion emphasis on opening studies. You gotta know your openings - but even more importantly, you need to understand the plans and ideas that arise from them. The game only just begins afterward!


What do you think the biggest issue in chess at the moment?


To make chess events more accessible to the general public - I think the year 2020 has given a great boost to chess and we shall continue our efforts to make the game and chess broadcasts easily understandable and enjoyable for everyone interested.


I'm hopeful that the new FIDE administration will keep making positive changes in the chess world, there's a lot to repair and improve on.


I was sitting in the front row, literally in the front row, at the Carlsen-Caruana match in London, and I must say I was really impressed with the fight Fabiano had given to the World Champion. I think Caruana will get another shot at the title and may be able to take the crown next time.


I'm gonna pick Caruana for this one!


I was lucky to work with a great team at Chessable, where everyone who helped me was an experienced professional in their fields and at the same time really easy-going and positive people to be around. Definitely will repeat :) #CyborgAnnaShallReturn