Vidit goes into the last round of the Prague Masters with a half-point lead but he would have won the tournament with a round to spare if not for losing a completely winning position against David Navara. Nikita Vitiugov drew a won position against Jan-Krzysztof Duda, while Nils Grandelius rejected a draw by repetition only to lose to David Antón, leaving no less than 7 players in with a chance of reaching a playoff. The Challengers is also up for grabs after Kacper Piorun beat the leader to make it a 4-way tie for 1st place. 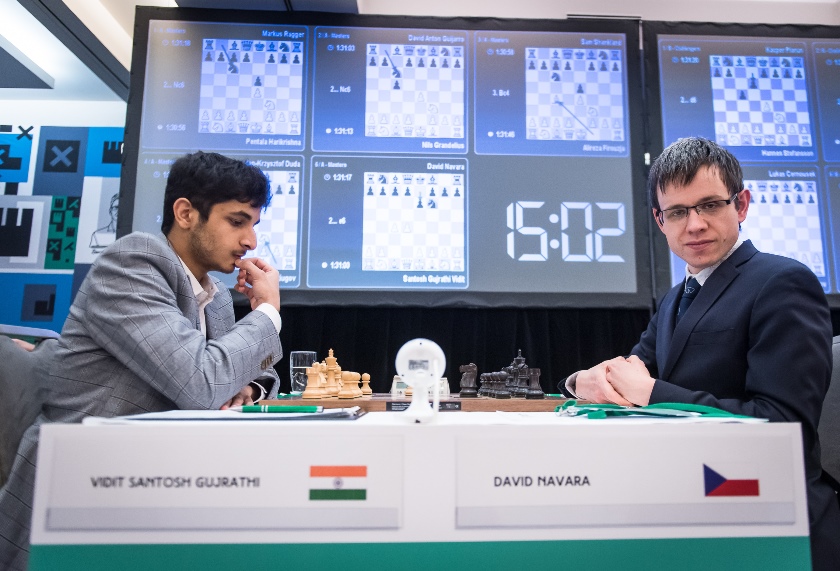 Vidit was so close to winning the tournament in style, before the horror show began | photo: Vladimir Jagr, official website

You can replay all the 2020 Prague Masters games using the selector below:

Harikrishna-Ragger was the only completely uneventful draw in the penultimate round of the Prague Masters. The balance was also never seriously upset in Firouzja-Shankland, but 16-year-old Alireza was pressing for almost the whole game until a draw was agreed on move 57. Everywhere else we got high drama.

The game of the round was an opening disaster for David Navara, who later said he’d underestimated 12.d5! and that all his counterplay was a tempo short. 14…c6!? was the kind of move you make and pray:

Vidit spent 21 minutes before he did go for 15.Bxf7+!, with some of that time no doubt spent contemplating whether he really wanted to take any risks when a draw would suit him fine going into the final round of the tournament. It was too tempting, however, and after 15…Kf7 16.e6+ Kxe6 he spent another 17 minutes on 17.Qe2+:

The time spent was understandable – 17.Qa4 may be even stronger, for instance – but would prove costly later. Initially Navara had thought he could hide his king on c7, but he realised that 17…Kd6 18.Rd1+ (18.Nd4 is even better according to our silicon friends) 18…Kc7 19.Ne5! wins material for White. White was also winning after 17…Kf7 in the game, however, and Vidit’s advantage had grown to an overwhelming level before David played 32…Rd8:

White was down to under two minutes, and in such circumstances the sudden threat of mate with Rd1# (if the d7-rook moves and doesn’t give check) is unpleasant. With more time the Indian grandmaster would surely have played 33.Rdf7+!, keeping the rook pair on the 7th rank, and then only after 33…Ke8 gone for 34.b3. White has a looming threat of Nf6+ and is a huge favourite to win.

Instead Vidit played 33.b3? immediately, allowing David to exchange off rooks with 33…Rxd7, when the lion’s share of White’s advantage had gone. White still reached the time control with an extra pawn, however, so that it seemed it was at least a game of only two results for Vidit – would he win or draw? 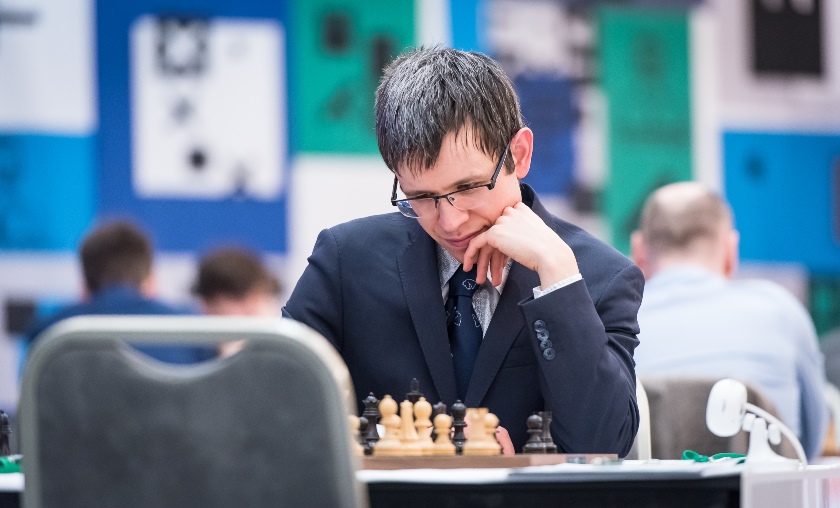 David Navara is such a nice guy, but that doesn't mean he can't crush your dreams on the chessboard | photo: Petr Vrabec, official website

Instead he found a third option. In hindsight he should perhaps have exchanged off the last pair of rooks to enter a knight ending a pawn up, but he kept the rooks on the board and began to take real risks when he rejected a repetition of moves. Then everything collapsed:

64…Kd7! was the last move and the white pawns had been stopped. Navara commented:

I was extremely lucky in this game, but it happens sometimes in chess when you don’t give up and try to search for your chances. 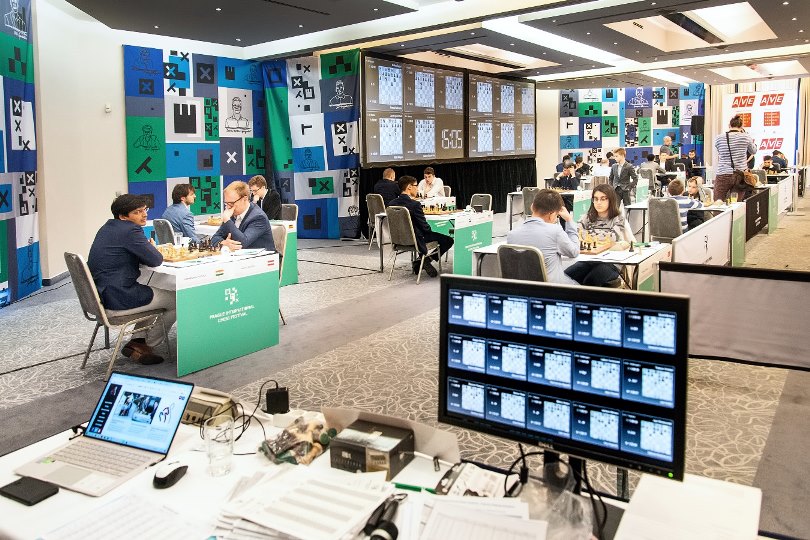 Sometimes looking for chances can be fatal, however. After losing two of his last three games Nils Grandelius didn’t want simply to take a draw against David Antón:

He could have kept repeating moves with 23.Rg2 Qh4 24.Rh2 Qg3+, but instead he played on with 23.Kh1!?, which might have worked out since after 23…Nxe5! 25.dxe5 Qxe5!? White seems to emerge on top after the long forced line following 26.Nxh7!. Instead Nils played 25.Bd2 and after 25…h6 Black had what David noted was a very solid position. The Spanish grandmaster gradually took over and showed fine technique to win in 67 moves and go into the final round just half a point behind Vidit.

The player who came closest to catching Vidit was last year’s winner Nikita Vitiugov, who pressed from the opening and forced Jan-Krzysztof Duda to try and take refuge in a rook and knight vs. queen position. While it was still possible to believe in that fortress, by the time Nikita had won the knight the 7-piece tablebases were telling us the position was already winning for White. The last moment the win slipped away came after 55…Kf8:

That leaves the standings as follows going into the final round:

Vidit has Black against Duda, which means no-one is guaranteed to end the tournament with more than 5/9. As a tie for 1st place will be decided in a playoff that leaves the top seven players all still in the hunt! Navara-Harikrishna, Shankland-Vitiugov and Anton-Firouzja will all be potential title deciders, while only Ragger-Grandelius won’t affect that race. 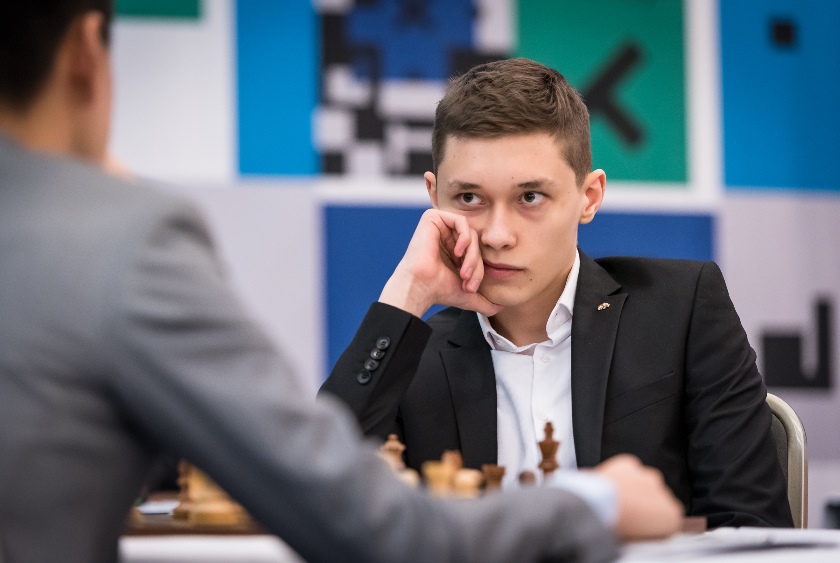 17-year-old Andrey Esipenko just missed out in Gibraltar despite having the best performance of any player in the tournament - will things go his way in Prague? | photo: Petr Vrabec, official website

It’s no less exciting in the Challengers, where the leader from Round 1 onwards, Icelandic GM Hannes Stefansson, lost for the first time, to Poland’s Kacper Piorun. That meant he was caught not just by Piorun but by Jorden van Foreest and Andrey Esipenko as well.

There won’t be a playoff in the Challengers, while 17-year-old Andrey Esipeenko is perhaps the favourite. He has White against Czech GM Jan Krejci, who has lost four of his last five games, while Andrey also beat Piorun, which may come in handy if first place, and a place in next year’s Masters, is decided by tiebreakers.

Don’t miss the final round, which starts 1 hour earlier at 14:00 CET, when we can expect the players to give their all in both events…