India’s Vidit took a full point lead in the Prague Masters and moved up to world no. 19 on the live rating list after punishing a risky pawn grab by Alireza Firouzja. The 16-year-old Iranian found himself lost by move 12, and that defeat came a day after he missed what would have been a brilliant win against Nikita Vitiugov in wild mutual time trouble. That brought Firouzja back to 50%, while Vitiugov and Jan-Krzysztof Duda are in joint second place on 3/5. 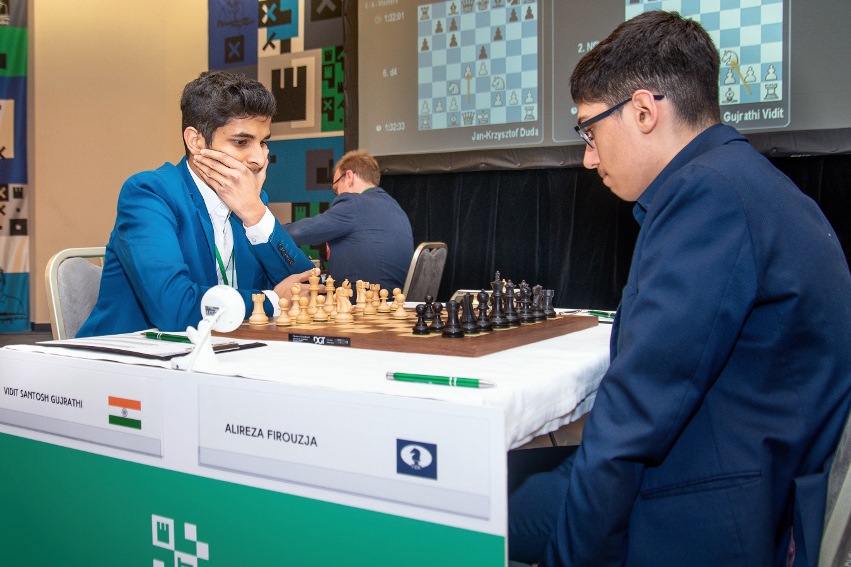 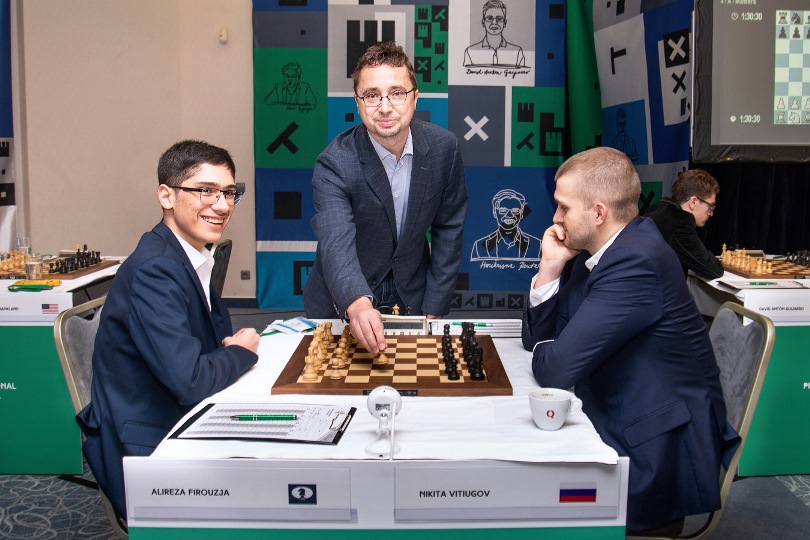 All five games were drawn in Round 4 of the Prague Masters, but while four of the games were relatively quiet the fifth was truly spectacular. Alireza Firouzja had beaten Harikrishna in the previous round and was full of confidence when he sacrificed a piece on 28 of another classical Ruy Lopez:

28.Nf6! After 14 minutes, leaving both players with just 12 minutes to go, Nikita Vitiugov accepted the challenge with 28…gxf6, and after 29.Qh4! it was already critical: 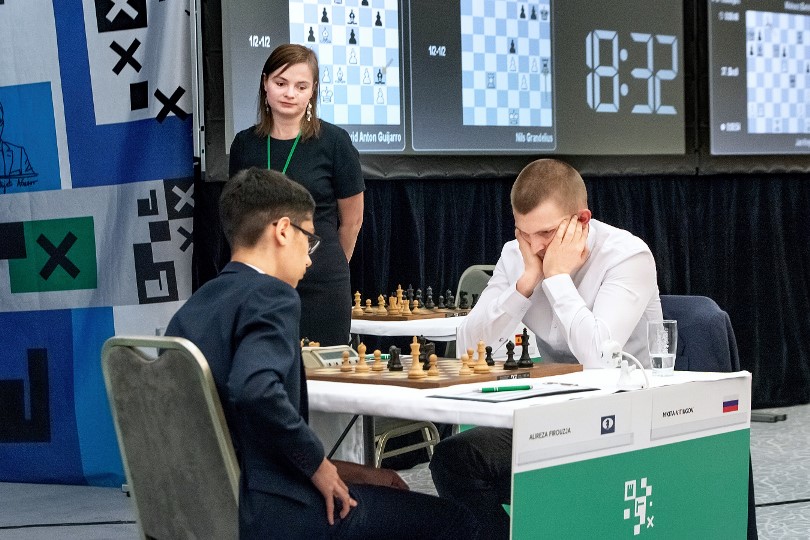 Instead, however, Nikita played 29…Rd3?! immediately, which could have cost him the game. After 30.Bxh6! Bxh6 31.exf6! Black had to give up his queen:

So far Alireza had played almost perfectly, but he made his last move with 12 seconds to spare and couldn't take a time-out here. White wants to play g5, but the bishop pinning the g4-pawn prevents that, for now. Firouzja unpinned his pawn, but also the h6-bishop, with 36.Qe5?! and after 36…Bf8 37.Kf2?! (e.g. 37.Qe3! and the white queen could still hope to defeat the three black minor pieces) 37…Ne4+! Black was alive again.

Instead White could have exploited the fact that Black is in almost complete zugzwang. There are various options, but simply e.g. 36.h4! is crushing. The d3-rook is pinned, the d6-knight needs to defend the f7-pawn and the f3-bishop has to stay on the d1-h5 diagonal to stop g5. 36…b4 37.cxb4 solves nothing, 36…Bd1 can simply be met by 37.Bxd1 and g5 will eventually follow, though 37.Bb1 (you can also play 36.Bb1) is perhaps cooler. That leaves 36…Be2, but after 37.Kf2 Black is out of options:

After White missed those chances it was still tense, however, since both players were down to seconds: 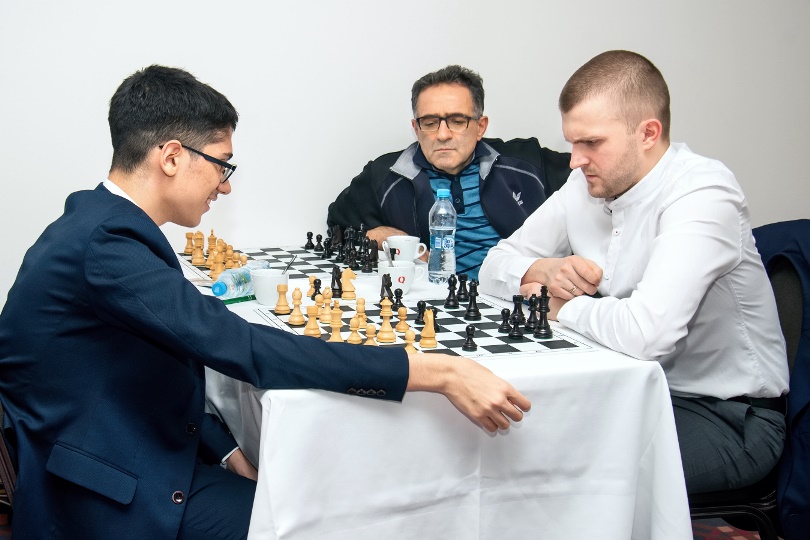 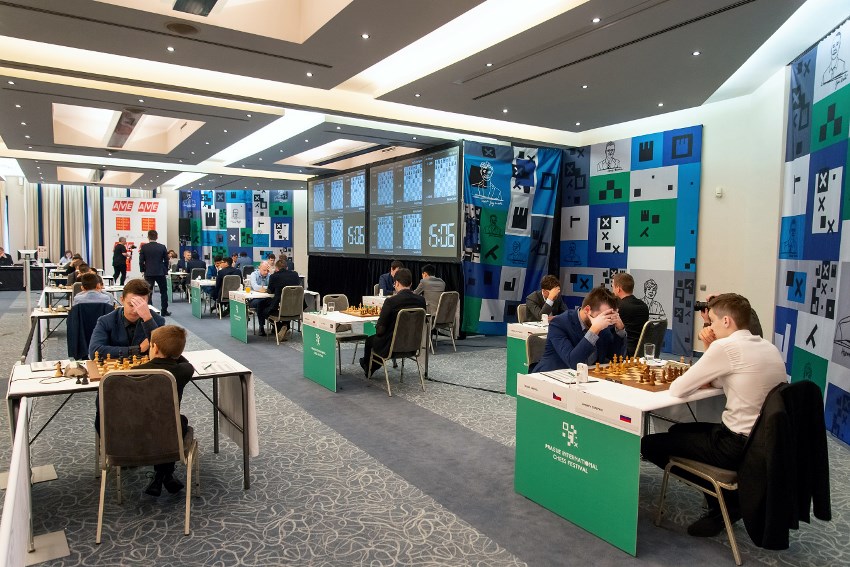 Round 5 underway in the Prague Chess Festival, which is becoming a top event | photo: Vladimir Jagr, official website

If that was a big miss for Firouzja things would only get worse in Round 5, where Vidit made it three games with the white pieces, three wins in Prague, though this one was easier than he could have imagined. After he played 9.Be2 in an Exchange Slav he was puzzled why his opponent sank into an 18-minute think:

The Indian grandmaster said he was winning here, but after 12…Qxa3! Black may just about have enough material to weather the coming storm e.g. 13.Nb6 Rd8 14.Bc7 wins the exchange, but the game goes on. Instead after 12…Qa5? 13.Qb3! our silicon friends tell us it really is over for Black. Firouzja fought on with 13…b5 and when he finally managed to castle it looked as though he might have survived at the cost of a mere pawn:

The pain wasn’t over, however, since 22.Nc6!, hitting the b4-bishop and threatening Ne7+ and Nxf5, was lethal. After 22…Rc8 White could simply have taken on b4, but he instead played 23.g4! to end any back rank mating threats. The game concluded 23…Nc3 24.Bf1 Black resigns. 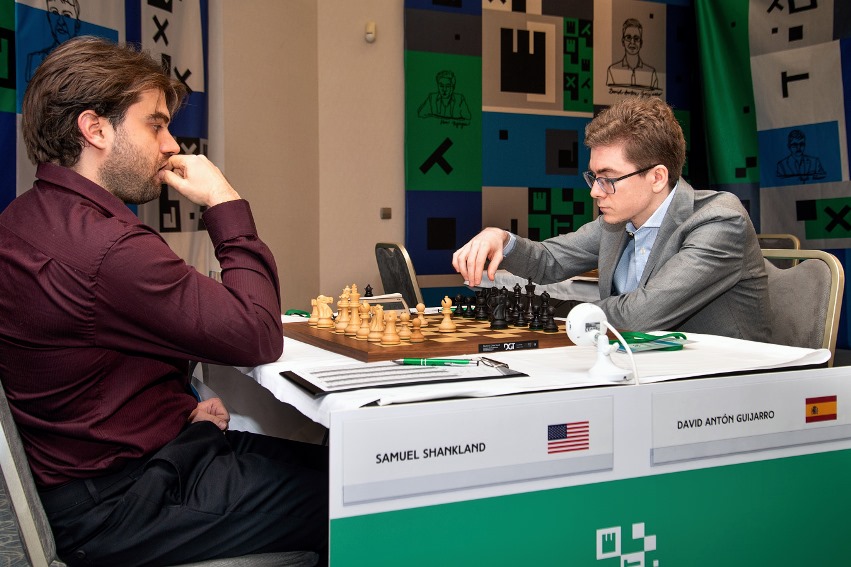 That left Vidit on 4/5, a full point ahead of Vitiugov, who drew with Harikrishna, and Jan-Krzysztof Duda, who drew against Markus Ragger. Behind them on 50% are Firouzja and David Antón, though the Spanish star had to survive a very tricky position against Sam Shankland:

Sam’s a-pawn is threatening to advance and win the game. How can you deal with it? David cut the Gordian knot with 48…Bxa5! and a draw was agreed. Black’s kingside pawns are worth at least a bishop. 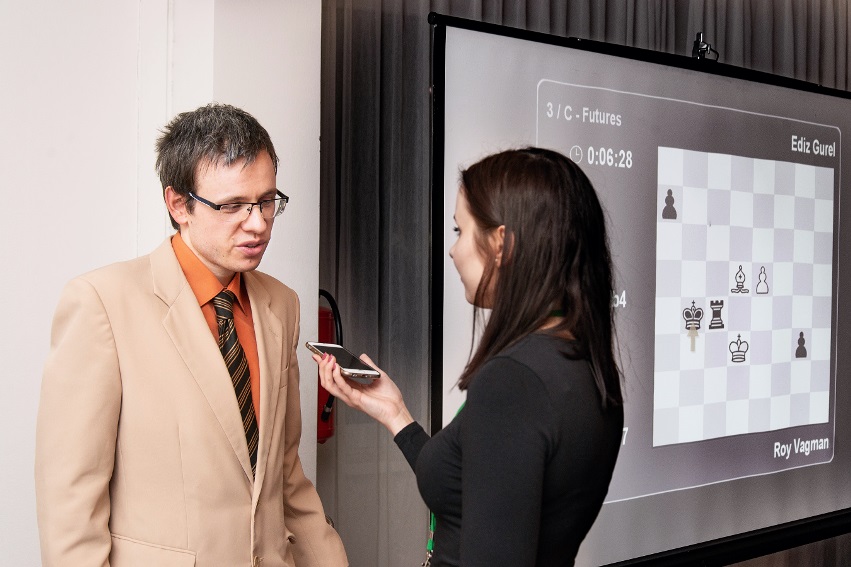 The only other decisive game in Round 5 of the Masters was a welcome one for local chess fans, since David Navara scored the first win in Prague for any of the five Czech players in the Masters or Challengers. He did it by beating Nils Grandelius in fine style, with the Swedish grandmaster getting tangled up in time trouble: 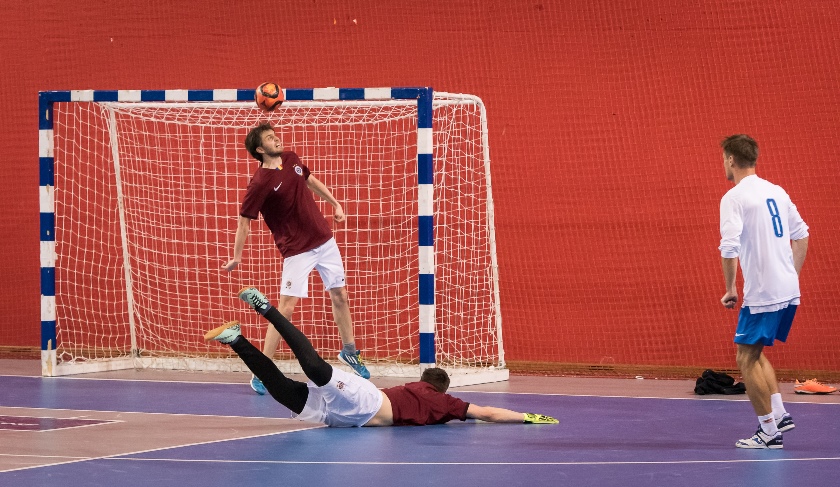 That leaves the standings at the top of the Masters as follows with four rounds to go:

Meanwhile the Challengers continues to be led by Icelandic GM Hannes Stefansson, who qualified via last year’s Open and has beaten three Czech players with the white pieces.

There are two players in close pursuit, however. 17-year-old Russian Andrey Esipenko now has two wins in three games, while Poland’s Mateusz Bartel has won his last two games. He noted he was inspired to win in Round 4 by Facebook informing him that he’d won the Aeroflot Open 8 years ago that day (including a win over a certain Fabiano Caruana), while in Round 5 he crushed the tournament’s top seed Nijat Abasov.

Bartel plays the leader with White in Round 6, while in the Masters Vitiugov could catch Vidit if he won, also with the white pieces. You can watch all the action from Prague from 15:00 CET each day: Masters, Challengers, Futures, Open!