Alireza Firouzja arrived late for the Prague Masters and played a quiet draw against Markus Ragger in Round 1, but any fears of a cautious start soon disappeared. 2019 Masters winner Nikita Vitiugov began by beating 2019 Challengers winner David Anton, though midway through the game the opposite result had seemed more likely. Vidit scored the fastest and most brutal win to take down Sam Shankland, while top seed Jan-Krzysztof Duda moved up to world no. 13 by beating local hero David Navara. 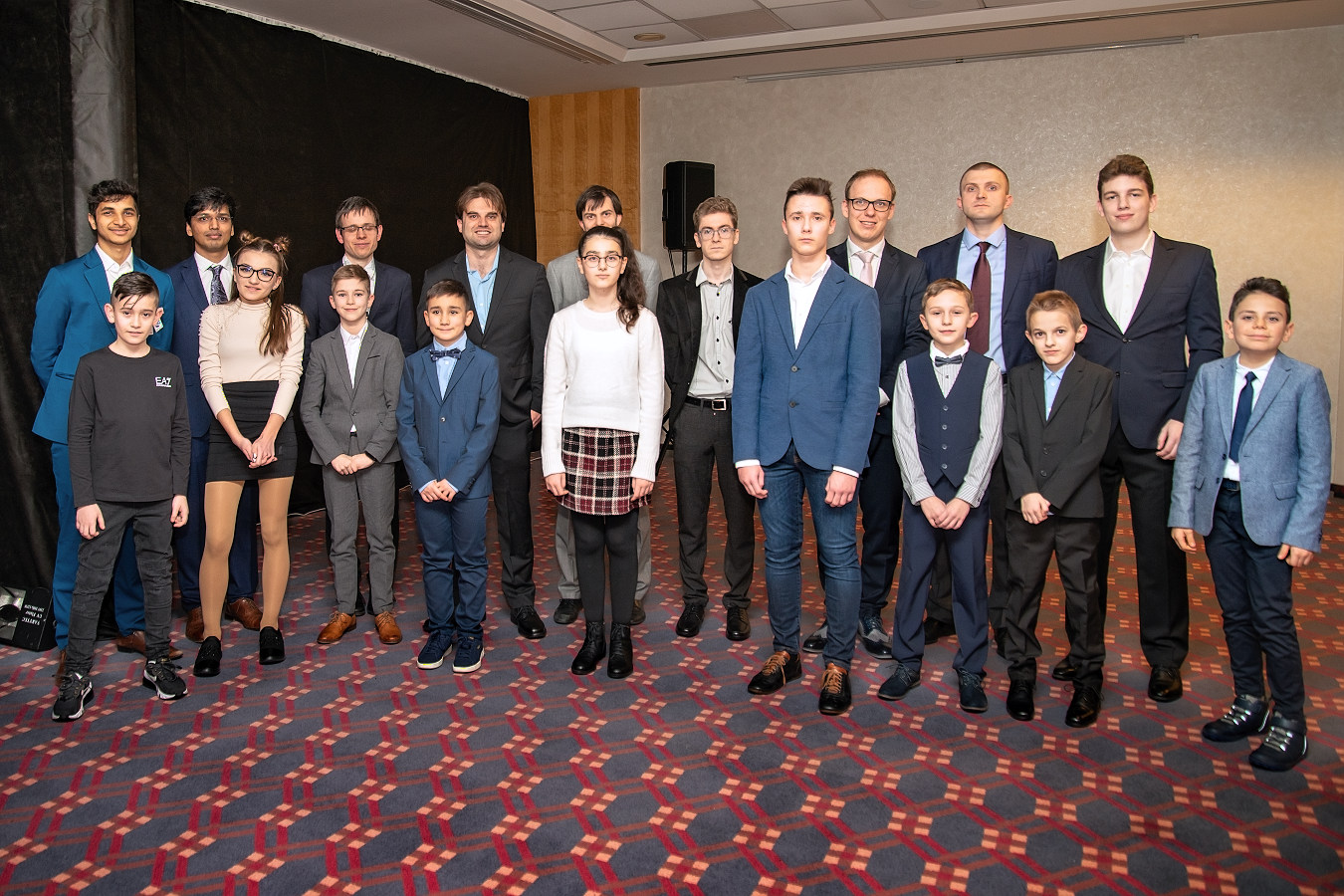 Spot the star who was missing at the opening ceremony! | photo: official website

There was one player conspicuously absent from the Prague International Chess Festival opening ceremony – Alireza Firouzja. The youngster was playing as a late replacement for Wei Yi, and seems to have had some prior engagements organised in Qatar:

He made it to Prague in the end, however:

His first game against Markus Ragger for 24 moves followed two draws – the Naiditsch-Wojtaszek classical game in the last round of the 2018 Isle of Man tournament that led to them playing a playoff for first place, and Anand-Svidler from the 2019 GRENKE Chess Classic. 25.h3 was a novelty, but not exactly an earth-shattering one:

Ragger’s 25.Rfe8!? was a bold move, played after a 10-minute think, since it offered an exchange into a queen ending with 26.Rxe8+ Qxe8 27.Rxa7 Rxa7 28.Qxa7 Qe1+! 29.Kh2 Qxb4. It looks as though Markus had judged everything correctly, however, since despite a better pawn structure Alireza was unable to make any progress before the players drew in 44 moves.

The only other draw was Grandelius-Harikrishna, where Nils picked the modest 14.a3 instead of the little trick 14.Nb5 that had first been seen in Bisguier-Penrose, Hastings 1960/61. The game ultimately fizzled out into a draw.

One game that certainly didn’t fizzle out was Vidit-Shankland. Vidit admitted he was “semi-improvising over the board and semi-recollecting [his] notes” and he was behind on the clock and seemingly in some difficulty, at least until Sam played 15…c6? (15…Nbd7!). That stumbled into a surprising tactical refutation:

The eagle-eyed Vidit quickly played 16.Qb1!, and it turns out e4 can no longer be prevented.

The back rank weakness would cost Black his queen. In the game 16…Bc8?! also invited 17.e4! and it was shocking how difficult Black’s position immediately became to play. Soon the queen was caught:

26…Bxe5 27.Rxf6 Bxf6 kept something approaching a material balance, but White still had a raging attack and what followed was a massacre until we reached the final position after 32.Rc3!:

The next player to win was 21-year-old Polish top seed Jan-Krzysztof Duda.

Czech no. 1 David Navara reacted badly to his opponent’s bold 11…g5!? in the Najdorf, and soon White was in deep trouble. 17.Qf3 already had an element of desperation about it:

Duda sensed his opponent was dreaming of 17…Qxb2 18.0-0 and suddenly White’s prospects have improved, but he kept the king in the centre with 17…Bg5. David forced off queens with 18.h4 Qe3+ 19.Qxe3 Bxe3, but White’s position was still ugly and Duda was utterly ruthless:

The final game to finish was an interesting match-up between last year’s winners in Prague. Nikita Vitiugov had won the Masters while David Antón won the Challengers to qualify for this year’s Masters. David then repeated that trick in Wijk aan Zee last month, where he qualified for the 2021 Masters, while Nikita had a disappointing event as a late replacement for Ian Nepomniachtchi – he scored no wins and lost three games. 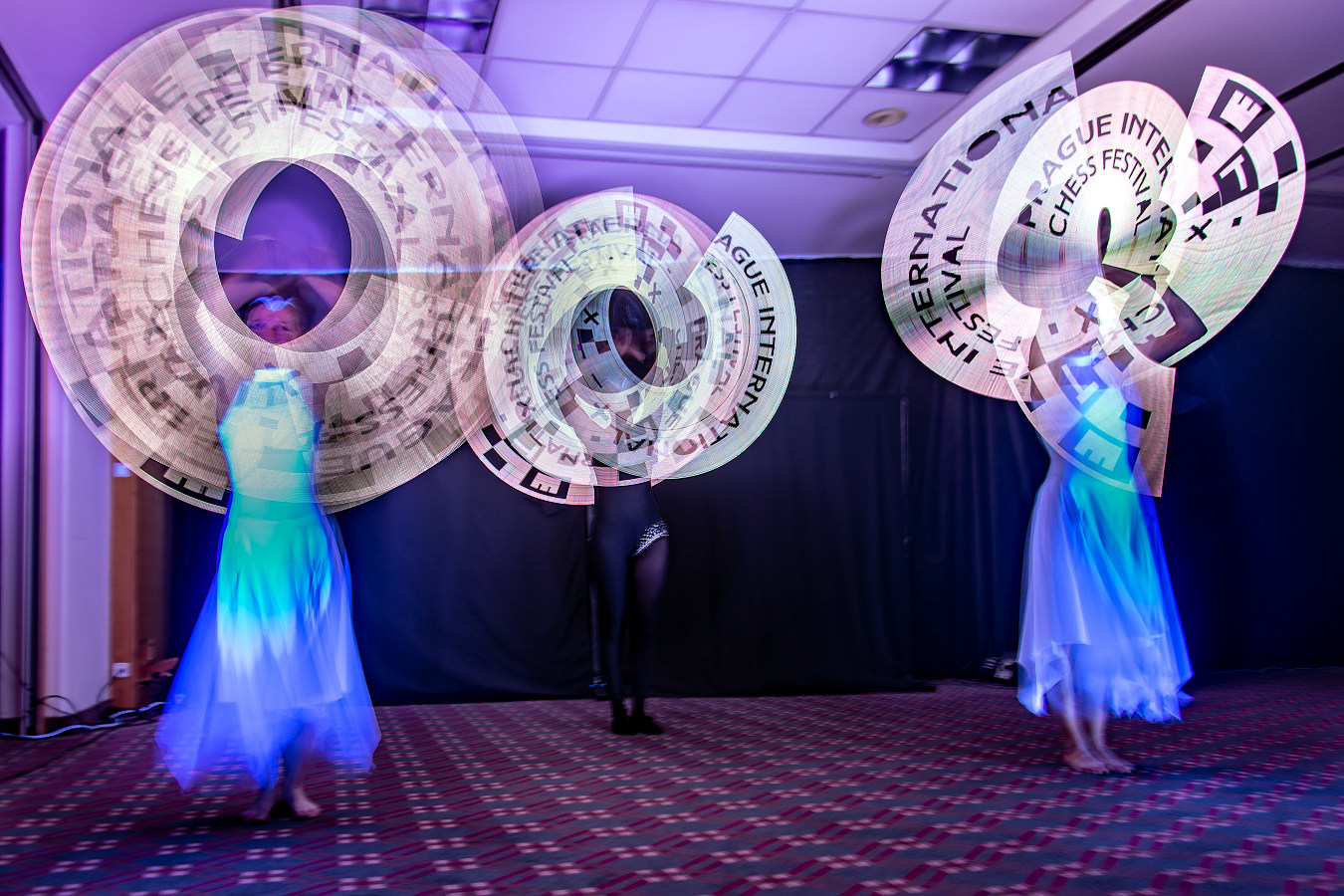 The Prague Chess Festival has been a happy hunting ground for Nikita Vitiugov so far | photo: official website

At first it looked as though that momentum (or lack of it) might carry through into Prague, since David played the Sicilian Rossolimo more convincingly than Magnus Carlsen had against Vishy Anand in Wijk and even Nikita admired his opponent’s play. It was a complicated structure, however, and David’s enterprising play would ultimately backfire:

Here the young Spaniard went for 27…Bxh3! 28.Qxe5 (28.gxh3?? Qf2+!) and should perhaps have followed up with 28…Nxg2, when the computer insists either White or Black will soon have to force a draw by perpetual check. Instead after 28…Bg4 29.d6! Nikita had a dangerous passed pawn.

The game still hung in the balance, however, and what ultimately led to Anton’s downfall was perhaps the clock. He played 36…Rf3?! (36…Kf6! looks the best hope) with 39 seconds to spare:

After 37.Kg2! there was nothing better than admitting the last move had been a waste of time and retreating to f8, since after 37…Re3 38.Na6! the e4-pawn is immune as Nc5 will be a killer fork. 38…Rd3 39.Rxd3 cxd3 40.Kf2 simply left White with an easily won ending, with resignation coming on move 44.

So three of the top four seeds lead, but there’s a long way to go!

You can watch all the action from Prague from 15:00 CET each day: Masters, Challengers, Futures It’s worth dropping by for the shirts alone!