16-year-old Indian prodigy Praggnanandhaa was in supreme form as he defeated Christopher Yoo 3:0 to win the Julius Baer Challengers Chess Tour, taking the top prize of $12,500 and earning a regular spot on the 2022 Meltwater Champions Chess Tour. 14-year-old Christopher Yoo took the $7,500 second prize and impressed by making each game of the final an intense battle, with Vladimir Kramnik predicting the US star will also become a “very, very strong player”. 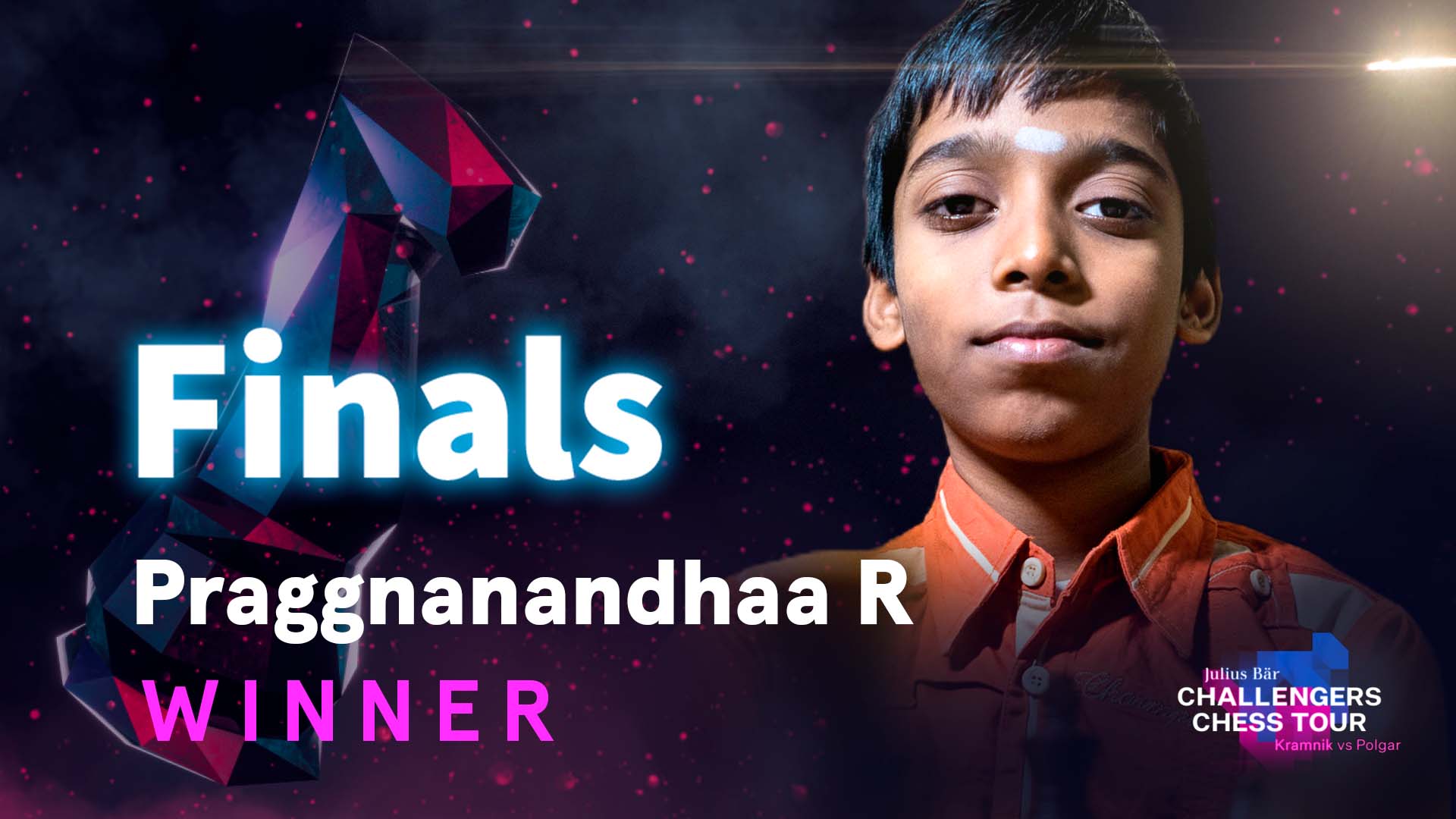 You can replay all the games from the Julius Baer Challengers Chess Tour Finals using the selector below.

And here’s the final day’s commentary from the awesome duo of Judit Polgar and Vladimir Kramnik.

Praggnanandhaa won the first Julius Baer Challengers Chess Tour event, the Polgar Challenge, back in April, finishing 1.5 points clear of the chasing pack. Even back then he was earning the very highest praise.

Six months later and it’s all about the Indian prodigy again, after Praggnanandhaa totally dominated the Finals, scoring an amazing 8.5/9, which could just as easily have been 9/9, since he took a draw in a won position against his great rival Vincent Keymer.

The incredibly tactically gifted 14-year-old Christopher Yoo showed that he meant business when he began the final with a wing gambit against the Sicilian: 3.b4!?

As surprises went, however, it failed utterly. Praggnanandhaa, whose preparation had already worked brilliantly in the Finals, commented:

I actually checked this line today… He played it once, I think in a blitz game or something. I was expecting some lines like this!

That explained his near instant response, and by the time 7…Qf6! appeared on the board, Black seemed to be winning.

Pragg agreed: “This is winning, but he played well — I think he played tricky.” After 8.dxc6 Qxa1 9.Qb3 bxc6 10.e5! Christopher had cut off the escape for the black queen, so that Pragg had to come up with a solution.

White is planning Bd3, defending the b1-knight, and Bb2, winning the queen. Pragg sank into a 3-minute think, but, as Kramnik noted, if there is a winning move in a position you can already expect the young Indian to find it, and he did, playing 10…a5!

After 16.Ne4 Rxb1 Vladimir Kramnik was insistent that 17.Nxd6+ was the way for White to play, but in fact it seems the young stars were both correct. Praggnanandhaa said that Black should be winning after 17…Ke7 18.Bxb1 Ba6!, and the engine agrees, while Christopher Yoo’s 17.Nxc3 also seems to have been clearly the strongest move.

The problem with the exchange of queens was that it led to an endgame Black should have been winning, but in fact Christopher came very close to holding it. He trusted his instincts and correctly grabbed a pawn on h7.

With the black king so far away from the action 25…g6 wouldn’t trap the bishop, so Pragg’s 25…f6 was a better option. Material was level and he had to win the game again, but that’s just what he did, with more drama following.

It was only after 50…d2! that there were no more twists, unless you count a minor slip.

It was an amazing fighting game from both players, with Vladimir Kramnik noting in the break that being ready to lose a game of chess can help you perform well under the utmost pressure.

That victory with the black pieces gave Praggnanandhaa a great start, and with the white pieces he seemed to be doing everything right in the second game… except for the speed of his play. He had a comfortable position in the Italian, but there was nothing comfortable about the position on the clock, with both players down to a minute after just 16 moves.

That time situation was a factor when Pragg played 16.Bg3?, of which he noted afterwards, “I overlooked Nxh3+, which was bad. I should probably just go Kh2”.

For a couple of moves Christopher had his best position of the match, but after 37.gxh3?! Qxh3 38.Ne2 it turns out 38…f5! was the best move to challenge White. If the e-file is opened Black’s attack will be completely winning, but the immediate 38…Bc5+ 39.Bf2! put Pragg on top again.

In the wild sequence that followed there were chances for Christopher to force a draw, but no more. Pragg was asked if he was worried:

I was very worried, but we didn’t have any time to think much!

Once again Pragg made it to a good endgame, and once again Christopher came extremely close to fully equalising before ultimately getting outplayed.

That left Praggnanandhaa just needing a draw in the 3rd game to clinch victory in the match, and this time he managed to keep things absolutely under control. Christopher Yoo fought on for 73 moves, but his attempts to unbalance the position only led to a loss. 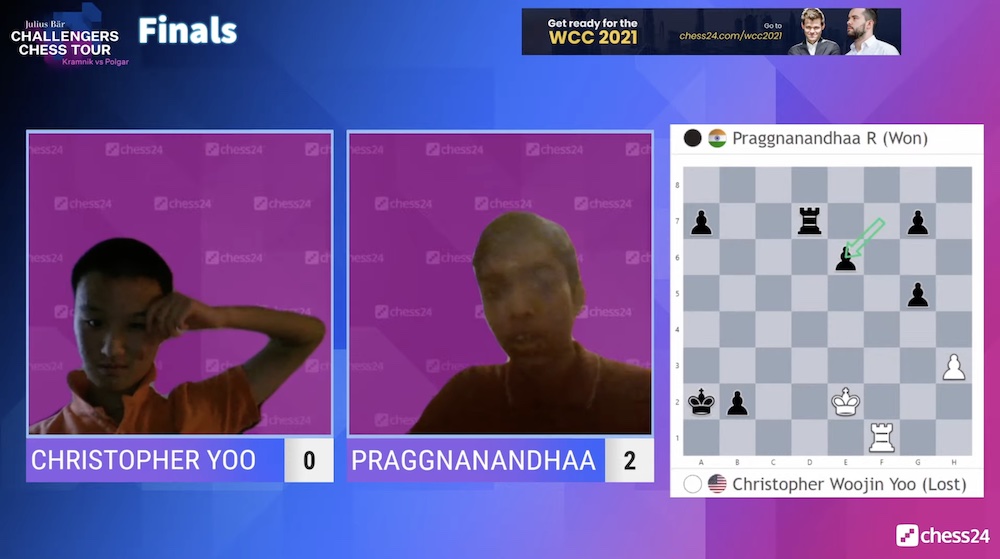 “I’m just very excited to play in the Meltwater next season,” said Praggnanandhaa, with Vladimir Kramnik feeling Pragg will take to the event like a fish to water:

How will Pragg celebrate his victory?

Actually I need to prepare for the Grand Swiss, which is coming in a week, so probably I’ll not see chess for a day or something.

The life of a potential future World Chess Champion isn’t easy, but Praggnanandhaa deserves all the plaudits he’s received for an exceptional performance. We can also expect to hear much more from 14-year-old Christopher Yoo, but that’s all for this year’s Julius Baer Challengers Chess Tour. We hope you’ve enjoyed it half as much as Vladimir Kramnik!

It might sound a bit dubious or criminal, but I actually don’t find this event any less interesting than the real Tour, than the Meltwater Tour — I actually enjoy it even more!