15-year-old Indian prodigy Praggnanandhaa has won the Polgar Challenge with a round to spare to earn $3,000 and a place in the 5th leg of the Meltwater Champions Chess Tour, where he’s likely to face World Chess Champion Magnus Carlsen in less than two weeks’ time. In the end Pragg’s 3.5/4 on the final day was enough for him to finish a full 1.5 points ahead of the chasing pack of Nodirbek Abdusattorov, Gukesh, Nihal Sarin and Volodar Murzin. Team Polgar clinched team victory with 96.5 points to Team Kramnik’s 88. 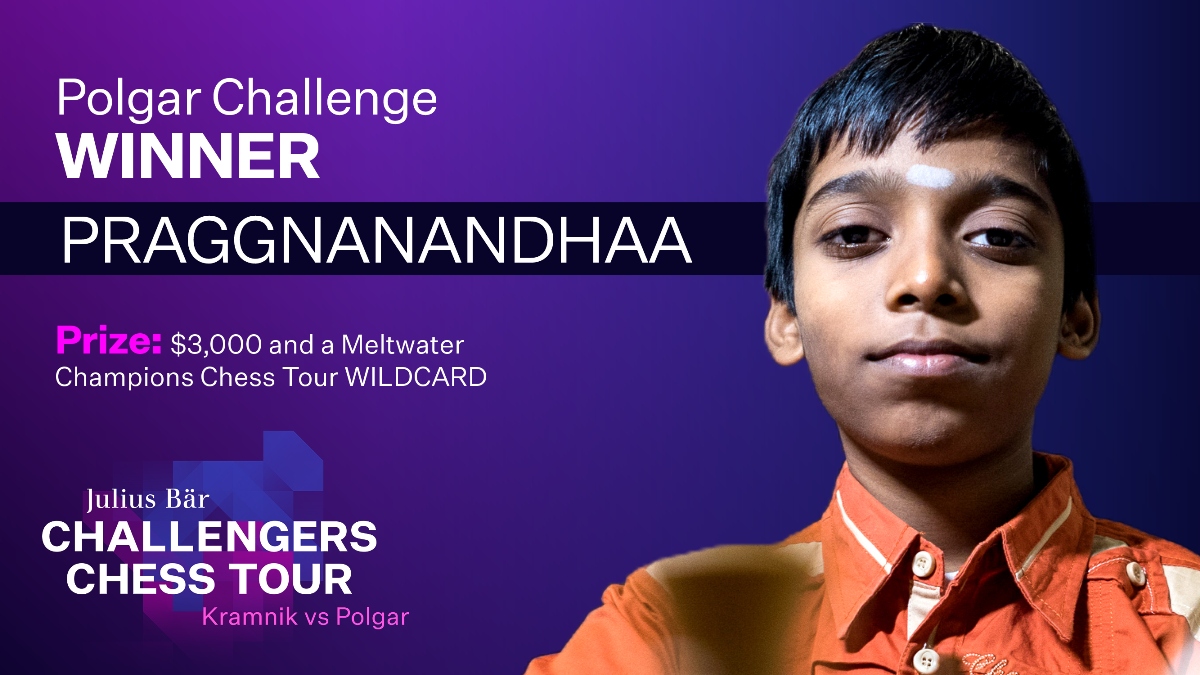 You can replay all the games from the Polgar Challenge, the 1st event on the $100,000 Julius Baer Challengers Chess Tour, using the selector below.

Praggnanandhaa lost the first game of the Polgar Challenge, to Russia’s Volodar Murzin, but after that the Indian prodigy barely put a foot wrong. He scored 11.5 points in the next 12 games and it was only a loss to Vincent Keymer in Saturday’s last round that gave his fans cause for nerves on the final day of the event.


They needn’t have feared, however, since Pragg made no mistake on Sunday, playing solid chess and snatching his chances when they arose to beat Leon Mendonca, Zhansaya Abdumalik and Sarasadat Khademalsharieh in the first three games and seal victory with a round to spare.

Sara’s 27…Qb4!? here was an objectively brilliant drawing resource, but after 28.Qxd7 Qxd4+ the Iranian IM didn’t find the correct way to force a draw by perpetual check and Pragg was able to grab the decisive win.

The pursuers all stumbled, with Nihal Sarin’s challenge ending as he lost to Christopher Yoo in Round 16. Awonder Liang, who also began the day a point off the lead, lost to Gukesh in Round 17, while in the same round Nodirbek Abdusattorov, who was just half a point behind, lost to Lei Tingjie.

The Uzbek star had ridden his luck in the previous round against Olga Badelka, and now collapsed.

Here Nodirbek, perhaps frustrated at missing winning chances earlier, decided to swap off queens with 39.Qe7??, but after 39…Qxe7 40.Nxe7+ Kf8, with both his knight and bishop attacked, it turned out he was just losing a piece and the game.

The former Chinese Women’s Champion made no mistake – in fact both her and her colleague Zhu Jiner scored 3/4 on the final day to finish on a plus score and just outside the top half of the table.


That loss for Nodirbek meant that Praggnanandhaa could, and did, clinch victory in the penultimate round, so that their head-to-head clash in the final round was a mere formality. Nodirbek came close to a win, but in the end the draw meant Pragg took first place by a full 1.5 points. 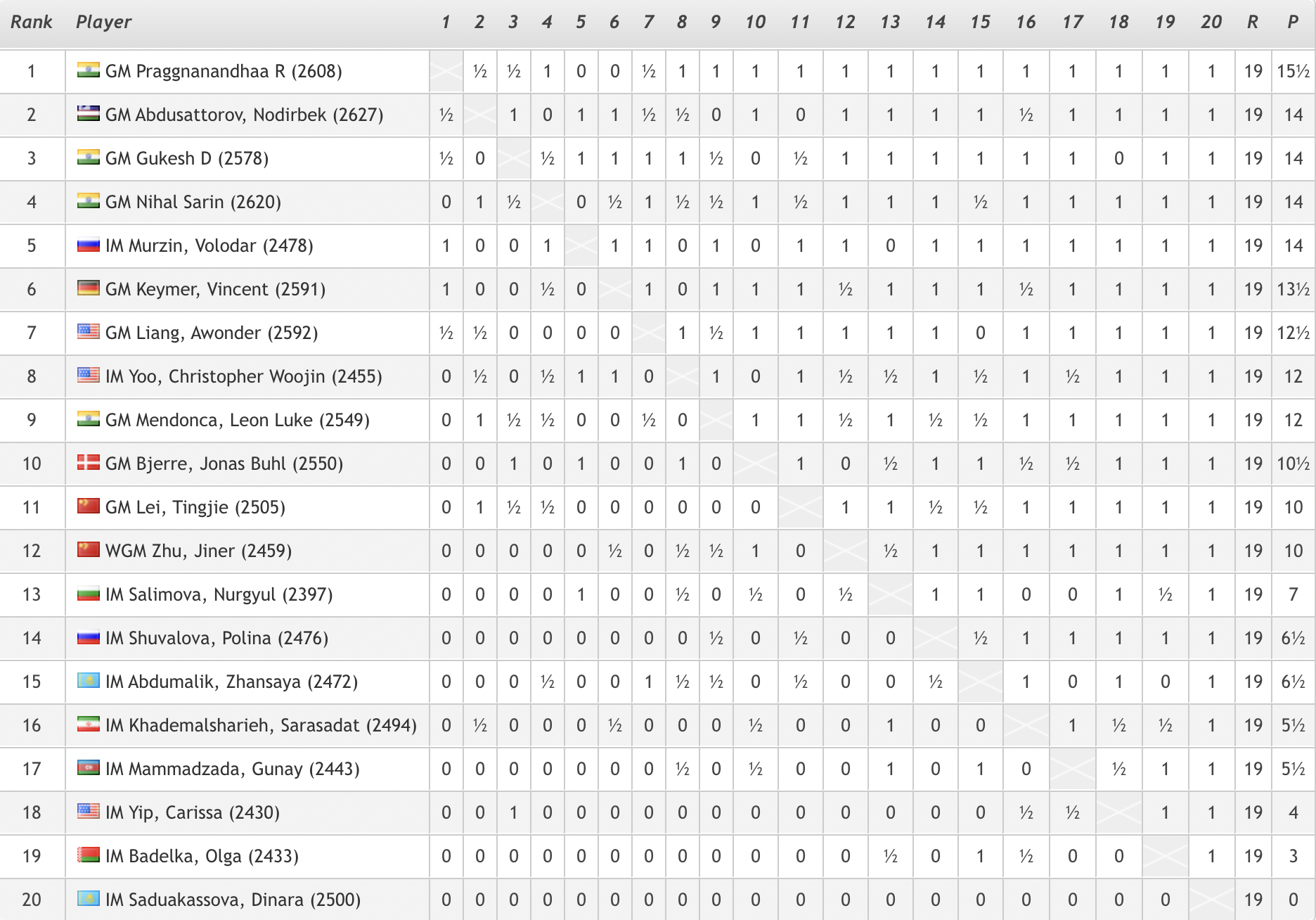 Praggnanandhaa didn’t just win the 4-day event and $3,000, but also qualified for the next Meltwater Champions Chess Tour tournament that starts on April 24.

Any winner would have been worthy, but in Praggnanandhaa we have a player that many are tipping as a future World Champion. Vladimir Kramnik sees similarities to another champion and near namesake.

He reminds me so much of young Vishy, so much, in everything - in character, in a way, he’s very light, it seems to me he’s very sharp, light, quick. And this passion of chess, I fully agree. And this kind of sharpness, this Vishy stuff. When I saw Pragg for the first time and I could see, ok, we will see if he will achieve as much as Vishy - that’s not easy, let’s put it this way – but… his chess also pretty much reminds me of Vishy - universal, sharp, quick, with a good sense of dynamics, with a good feeling of the position. To me somehow I felt like it’s a reincarnation of Vishy, even if Vishy is still there and still playing chess! But it’s very much reminding me of Vishy at this age, and I played first time with Anand when he was 17. I remember him more or less at this age.

Vishy himself joined in the praise for the young star.

As did his… father, who had earlier christened the tournament "PolgChamps"!

There was a pile-up behind Praggnanandhaa with Nodirbek Abdusattorov, who had pushed Pragg all the way, still edging second place on the tiebreak of having scored highest in the mini-league of the players on 14/19 (he beat Gukesh and Murzin). Gukesh won his last five games, Nihal Sarin won five of his last six, while Volodar Murzin won six in a row, and 10 of his last 11. In a tournament of decisive games – there were just three draws in 40 games on the last day – it was only Volodar who managed the feat of not drawing a single game.

The one player to really miss out at the very end was Germany’s Vincent Keymer, who had bounced back from a tough second day to win seven games in a row. He was a pawn up and close to winning against Christopher Yoo in the last round, a result that would have given him clear second place. Instead he ended up having to give up a piece for a passed pawn, and even then could have drawn with four pawns for a rook. It wasn’t to be, with Vincent having to settle for 6th place. 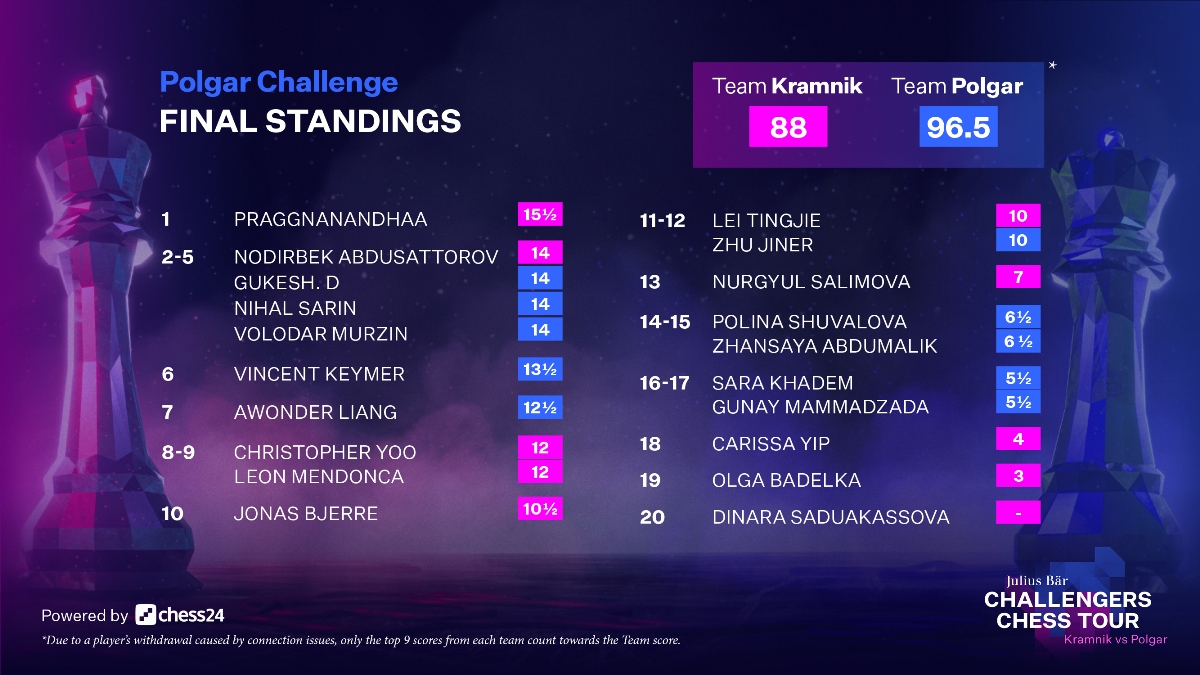 Team Polgar had taken a 4-point lead after Day 3 of the event, but on the final day they more than doubled the advantage to win the first event 96.5:88. Team Kramnik will next get a chance to hit back in two months’ time when the Gelfand Challenge is held from June 10-13. 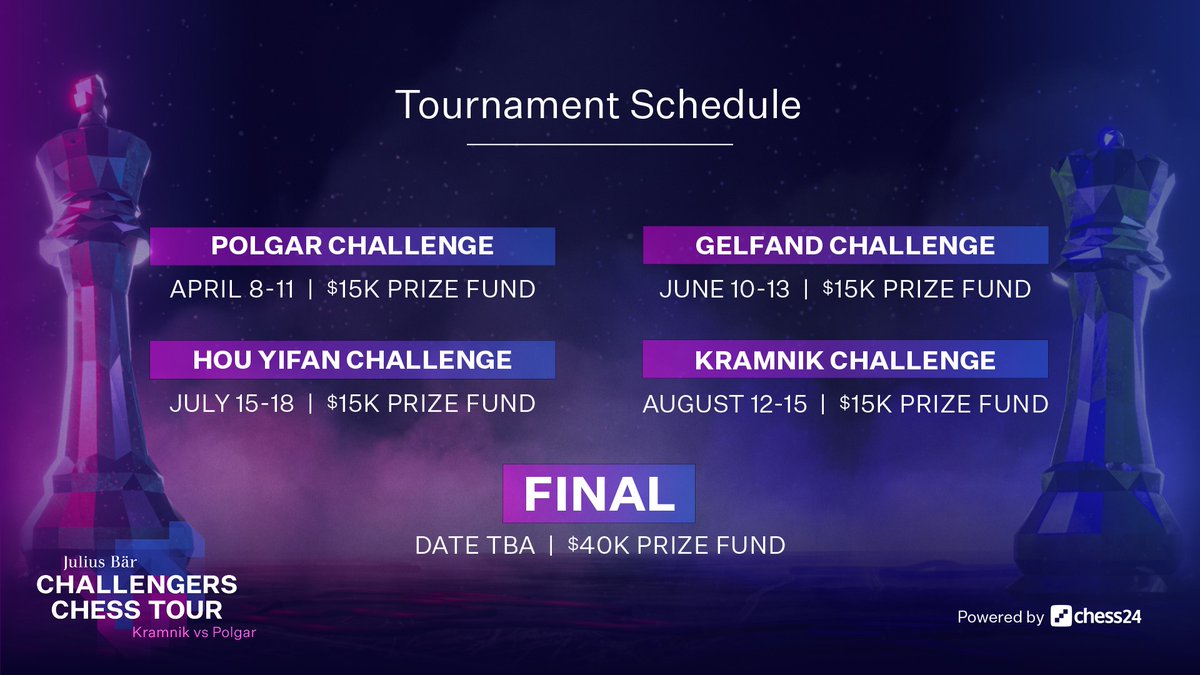 Before that, however, we have Praggnanandhaa playing in the Meltwater Champions Chess Tour from April 24, and before that the little matter of the Candidates Tournament resuming in Yekaterinburg, Russia in one week’s time, on Monday April 19th. All the action will be live here on chess24 with video of the players and some amazing commentators!