15-year-old Praggnanandhaa beat his one year younger rival Pranesh in Armageddon after exchanging blows in a wild first two games. That means Praggnandhaa is one of eight players who not only reached the Vidit Chess Tour quarterfinals but made it into the Meltwater Champions Chess Tour Indian Qualifier. 14-year-old Gukesh also made it through in Armageddon, while 15-year-old Raunak Sadhwani was knocked out by Harsha Bharathakoti. The biggest seed to fall was Abhijeet Gupta, who was knocked out 1.5:0.5 by 17-year-old Aronyak Ghosh. 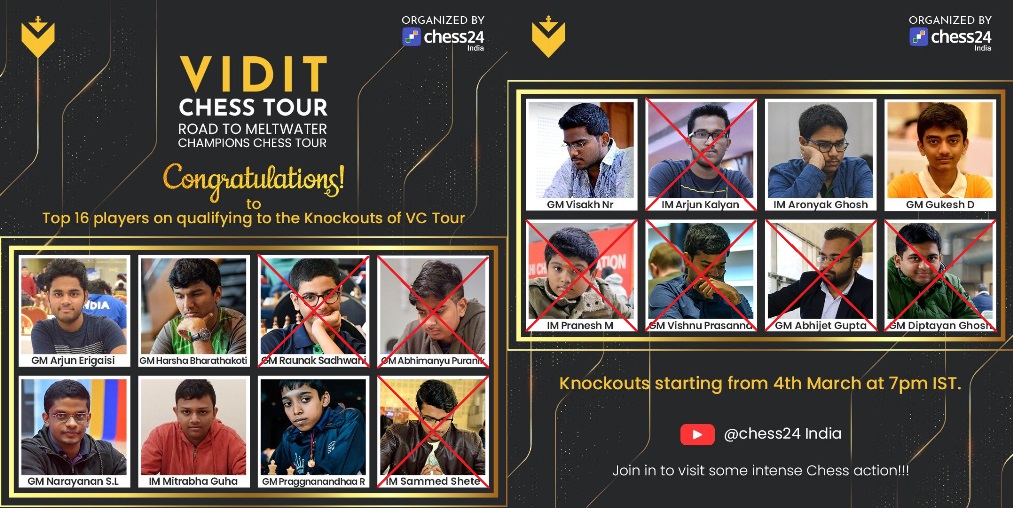 You can replay all the games from the Vidit Chess Tour knockout stages using the selector below.

And here’s the day’s live commentary from Grandmaster Srinath Narayanan, who was joined by 2-time Indian Women’s Chess Champion Bhakti Kulkarni and the irrepressible Adhiban.

In a way the Last 16 was the key round of the Vidit Chess Tour, since it not only qualified players for the quarterfinals but for a place in the Indian Qualifier of the Meltwater Champions Chess Tour. The 8 winners from Thursday will be joined by another 8 players in an event that will determine two Indian players for a tour event later this year.

Top seed Narayanan S.L., not to be confused with our commentator Srinath Narayanan…

…made things look easy against bottom seed Sammed Jaykumar Shete, who went for a fatal pawn grab in their first game.

It was 2:0 for Narayanan after the unfortunate 13.c3? in the next game.

Other seeds found it much tougher, however, with 31-year-old second seed Gupta knocked out by 17-year-old Aronyak Ghosh. The youngster found a nice way to draw an ending two pawns down in the first game and then smoothly outplayed his more experienced opponent with the white pieces in the next game.

The young talent on display in the tournament is enormous, and perhaps the most fun match of the day was the clash between 15-year-old Praggnanandhaa and his 14-year-old rival Pranesh. The first two games simply had too many complete swings in evaluation to summarise, but after exchanging wins it was Pragg who took over in Armageddon. Although his conversion was perhaps not ideal, he never lost control and mate ended the game.

14-year-old Gukesh, who holds the record as the 2nd youngest chess grandmaster in history after Sergey Karjakin, had a tough battle against 31-year-old Vishnu Prasanna. It wasn’t just the experience of his opponent, but that Vishnu is his coach. Perhaps that went some way to explaining the amnesty of a draw offer in the second game.

The computer gives Vishnu an almost +3 advantage (about the same as a piece) after 29.Rd6, but instead he took a draw that sent the match to Armageddon. One rash pawn break there from Vishnu allowed Gukesh to take over and claim victory.

It wasn’t all about the teenagers, since 21-year-old Harsha Bharathakoti took down 15-year-old Raunak Sadhwani 2:0. The first game featured a sudden and brutal attack with 25…Rxf2+! 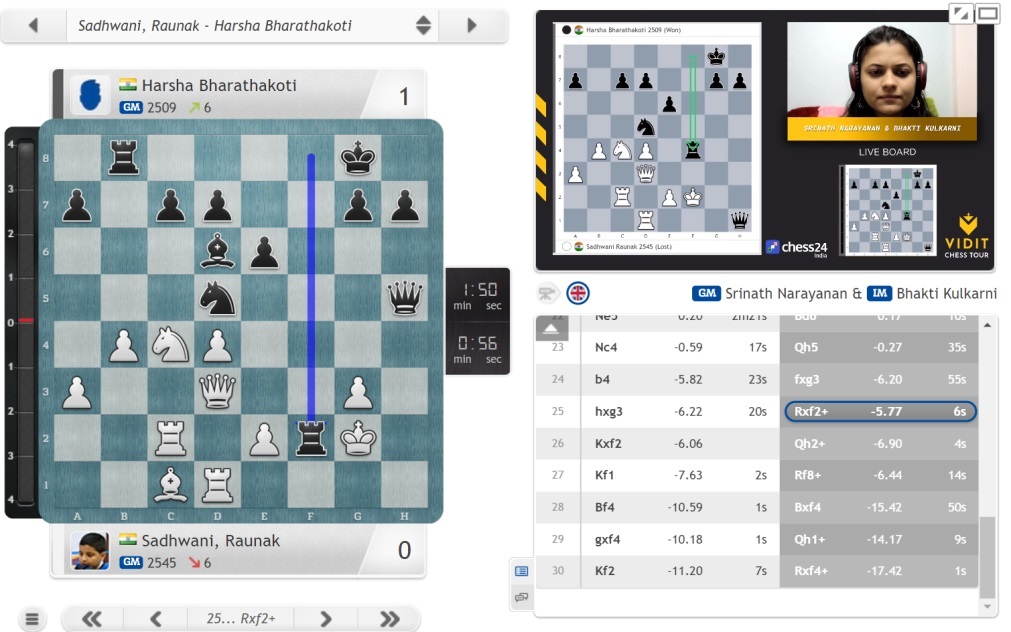 The quarterfinals are also best-of-2 games of 15+10 rapid chess, with an Armageddon decider if required. On paper Praggnanandhaa-Erigaisi looks like the closest match, after 17-year-old Erigaisi Arjun beat Arjun Kalyan 2:0 in an eventful Last 16 match.