12-year-old Praggnanandhaa could beat Sergey Karjakin’s record to become the youngest grandmaster in history if he wins the World Junior Championship taking place just now in Tarvisio, Italy. That would be an unlikely achievement for the 26th seed in a ferociously competitive event, but he stands at 3.5/4 after beating top seed Jorden van Foreest. Russians Kirill Alekseenko and Aleksey Sorokin have the only perfect scores, while the girls’ section is topped by Mongolia’s Davaademberl Nomin-Erdene. 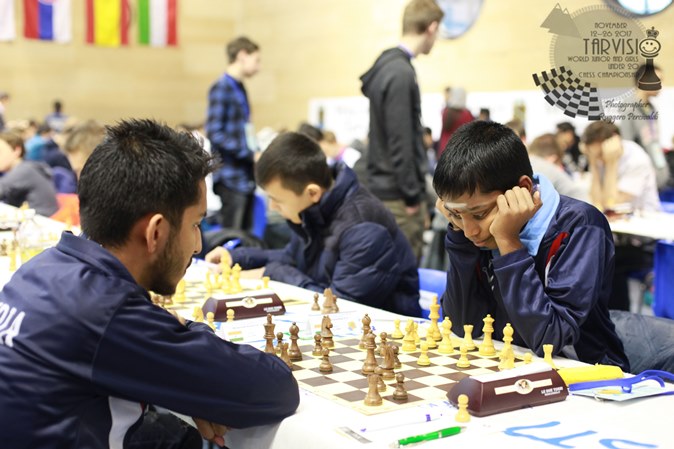 The 11-round World Junior Championship is taking place in the Italian Alpine community of Tarvisio, and if there was any doubt about what to expect that’s soon dispelled by the official website giving pride of place to the weather forecast! 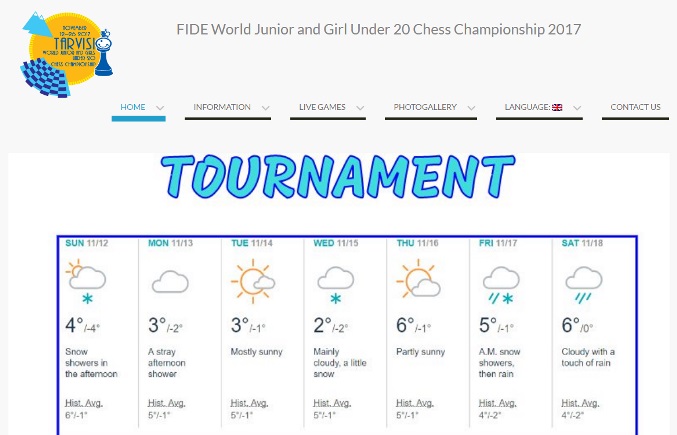 …though you can see that even in the venue some of the players are feeling the cold! 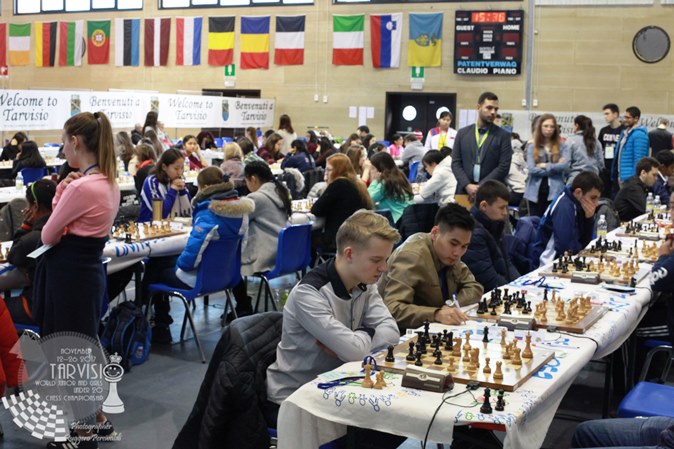 The battle on the chessboard is going to be heated, though. Some of the top eligible players such as Wei Yi, Jan-Krzysztof Duda and Vladislav Artemiev may be skipping the event, but there are plenty of stars of the future, and present, to replace them.

You can replay all the games using the selector below: 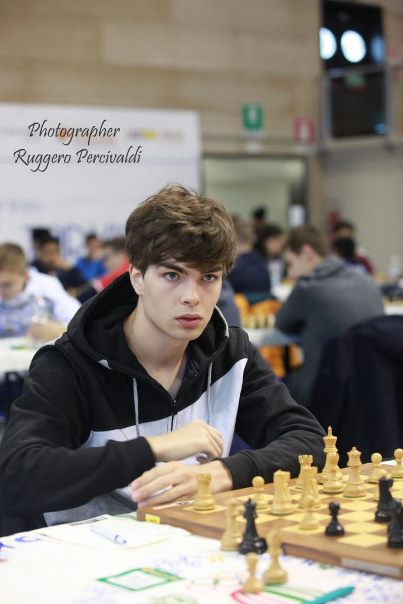 The World Junior Championship is not somewhere you generally travel to chase rating or norms, since it’s packed with underrated players who will be familiar names a few years from now. That was evident in Round 1, when of the top 10 seeds just four won, three – Jorden van Foreest, Grigoriy Oparin and Aryan Tari – were held to a draw, and two lost. 20-year-old Rasmus Svane had starred for the German team at the recent European Team Championship, scoring 5.5/6 at the end, but he lost to England’s 2364-rated Ravi Haria and then would also go on to lose to Austria’s Valentin Dragnev in Round 4. India’s Aravindh came close to winning the recent Indian Championship, but fell to 2357-rated Pavle Dimic from Serbia. He did, however, win his next three games.

There were more surprises further down the pairings – for instance, Turkey’s European Team Championship star Vahap Sanal has only managed 1.5/4 so far - and since only the top nine boards in each section are broadcast live it took a while for us to see top players meet. We got one of the most eagerly anticipated match-ups in Round 4, though, as 12-year-old prodigy Praggnanandhaa was paired against 18-year-old former Dutch Champion and top seed Jorden van Foreest.

Praggnanandhaa has already achieved the rating he needs to become a grandmaster, but has so far fallen short of scoring any grandmaster norms. His last tournament, the Chigorin Memorial, was a disappointment that saw him lose 18 rating points, though before that he beat David Howell on the Isle of Man. That failure to score norms has made something that at one point looked almost inevitable – his beating Sergey Karjakin’s record of gaining the GM title at 12 years and 7 months – look too close to call. There is one possible fast track to the title, though, since the winner of the World Junior Championship instantly gains the grandmaster title without the need for any norms.

His game against Jorden could be put down as “challenge accepted!” He played the Giuoco Piano, and after 15 moves there was the curious situation that Praggnandhaa had once played the position, but with Black, while Jorden had had it with White! It was the Dutch star who seemed still to be in book, but then on move 19 he fell into deep thought:

He may have been considering 19…Rd5, when after 20.Qxd5 Bxd5 21.Rxe7 the position looks equal. Instead he opted for 19…Qf6, but it turned out that when queens were later exchanged the structure was highly favourable for White. The only problem was that both players were out of time, but Praggnandhaa kept his nerve to find the one clearly winning time control move – 40.Nb7!

Black has a miserable choice and went for 40…a4, but 41.Nd8+!  essentially ended the game. Black is losing a pawn and the white king is ready to invade.

That win took Praggnanandhaa to 3.5/4, while two Russians, 17-year-old Aleksey Sorokin, who beat Argentina’s Alan Pichot in Round 3, and 20-year-old Kirill Alekseenko, lead with the only 4/4 scores. Kirill beat Israel’s Ori Kobo in Round 4 after catching him in a mating net: 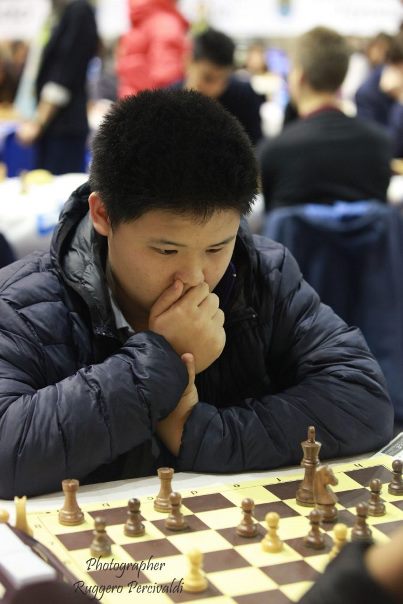 Awonder Liang already has the GM title so can turn his thoughts to winning trophies | photo: Ruggero Percivaldi, official website

In other action 14-year-old Awonder Liang is bidding to keep US control over the title which was won in 2016 by Jeffery Xiong. He had various chances to clinch his win over Nichita Morozov sooner… 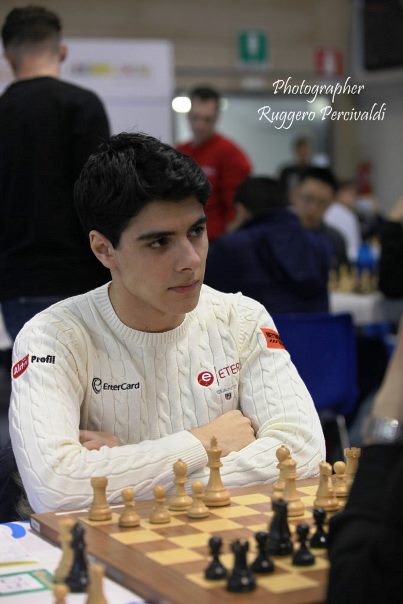 Aryan Tari is also there, after inflicting one of the worst pawn structures you’ll ever see on Jorden’s brother Lucas van Foreest:

To make matters worse 32…Bxh3 removed one of the two healthy pawns. The star move of the game perhaps came after 48.Rc2:

The standings at the top look as follows:

Two other siblings are split across the sections, since Praggnandhaa’s elder sister, 16-year-old Vaishali, is playing in the girls’ event. The former World Girls U12 and U14 Champion also faced the top seed in her section, Zhansaya Abdumalik from Kazakhstan. 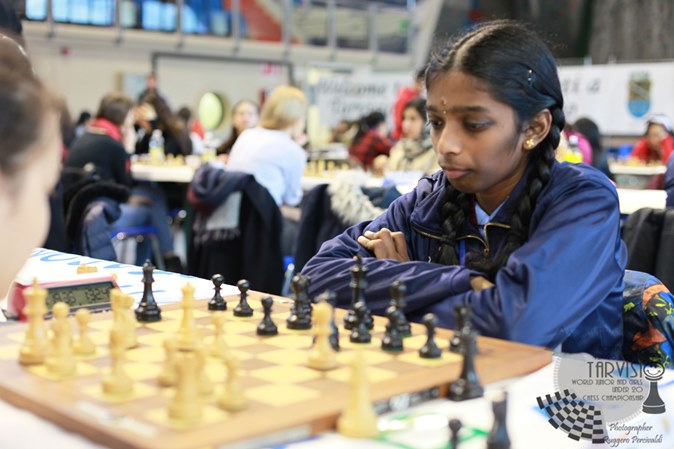 Vaishali has just played 9...Qa5 in her game on top board against Abdumalik | photo: Ruggero Percivaldi, official website 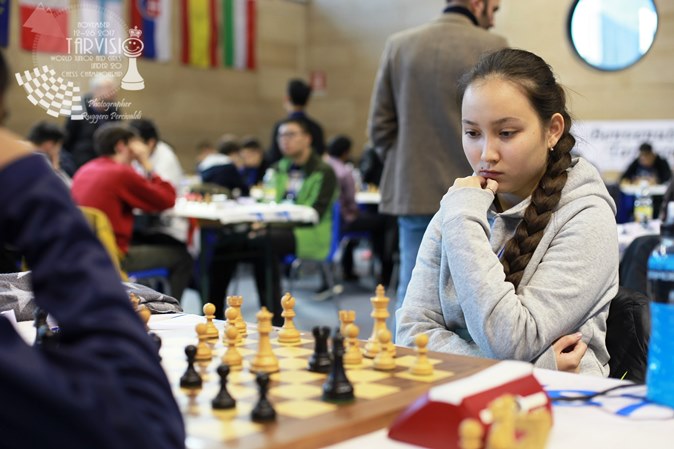 And this is Abdumalik thinking after Vaishali went for the traditional Sicilian exchange sacrifice 10...Rxc3 | photo: Ruggero Percivaldi, official website

Vaishali was eventually better with the black pieces in a razor-sharp ending:

It seems here 47…Rf2! was best, threatening e3, but after 47…f4 it was equal and eventually Zhansaya managed to eliminate the black pawns and push her b-pawn to victory. Bibisara Assaubayeva, also born in Kazakhstan but now playing for Russia, is level with Abdumalik on 3.5/4 after beating Greek rising star Stavroula Tsolakidou. 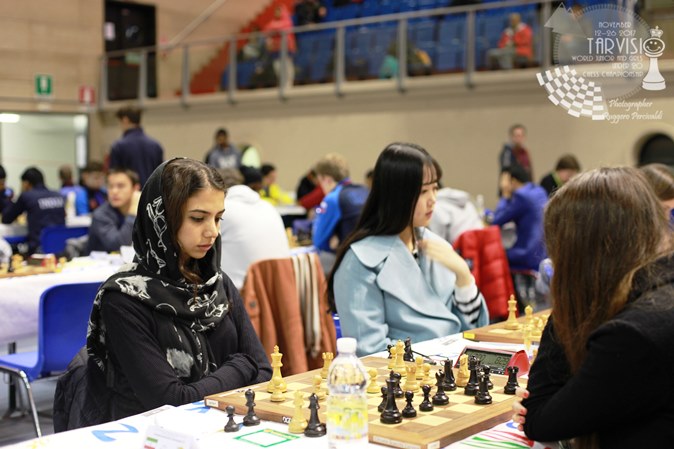 The leader so far, though, is 17-year-old former World U10 Champion Davaademberel Nomin Erdene from Mongolia. She faces Abdumalik in Round 5, with another 6 rounds to play in both sections.

You can watch the games live from 15:00 CET here on chess24: Open | Girls You can also follows the games in our free mobile apps: