Praggnanandhaa and Yoo storm into final

Praggnanandhaa and Christopher Yoo both needed just three games to reach the final of the Julius Baer Champions Chess Tour. Praggnanandhaa had Vladimir Kramnik comparing him to Hikaru Nakamura and then World Champion Magnus Carlsen as he played an almost perfect match against Vincent Keymer. Christopher Yoo’s 3:0 victory over Awonder Liang was less convincing, with Awonder making two strange blunders in the first two games, but Christopher won in style with a brilliant third game. 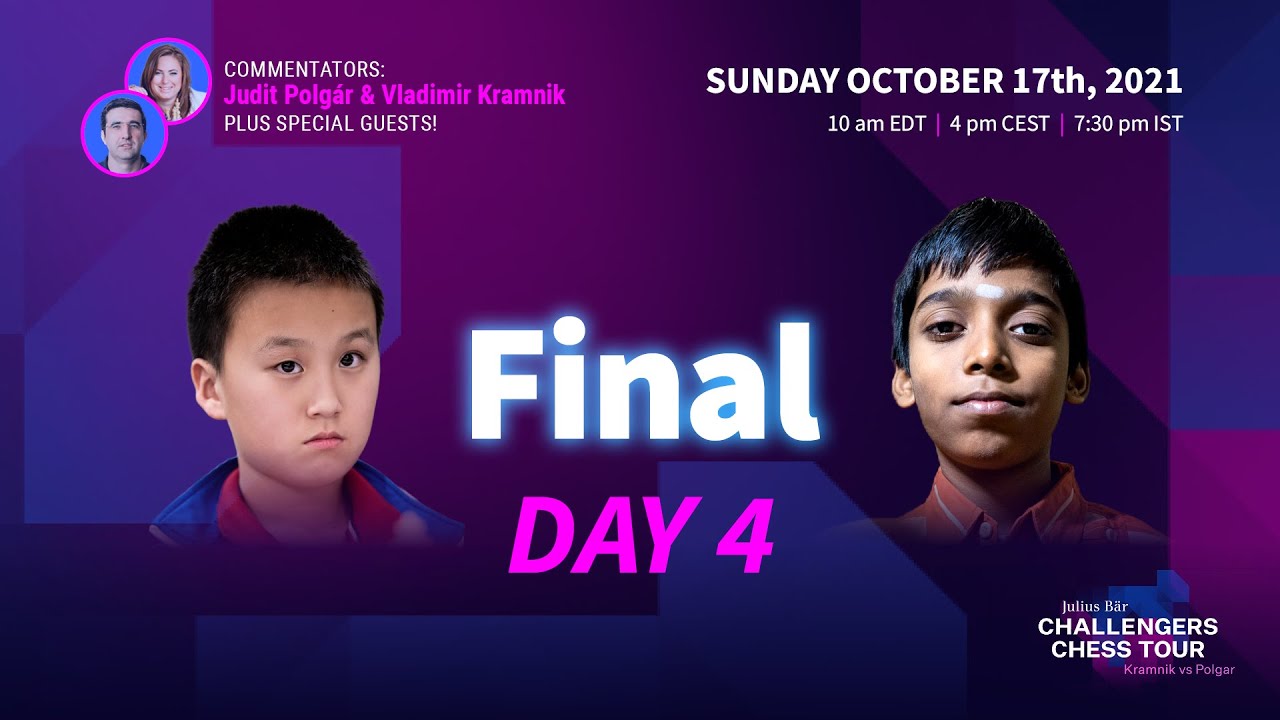 You can replay all the games from the Julius Baer Challengers Chess Tour using the selector below.

And here’s the day’s live commentary from Judit Polgar and Vladimir Kramnik.

Before this match began it was hard to call. The two players had been the star performers of the Tour so far, with Praggnanandhaa winning one event and Vincent two. There was nothing to suggest that one of the players would dominate in the way we witnessed.

Actually today I didn’t expect I’ll win like this. Vincent is very strong and I’ve lost to him twice in this Tour already, but it’s a good thing for me — I’ll take it!

Praggnanandhaa was helped by excellent opening preparation. In the first game he went for a Magnus Carlsen favourite of 4…a6 in the Queen’s Gambit Declined, a move Vladimir Kramnik remarked he would never play himself. Pragg’s 9th move seems to be a novelty.

Here he went for 9…Qe7 which ultimately prepared for castling long on move 16. He explained:

First game, this long castles idea I knew that it is possible. I didn’t have any deep preparation, but I knew that Qe7 and 0-0-0 Black can play if White goes h3 quick. I think I got a comfortable position and I played well in that game.

In fact it was better than that, with Kramnik deeply impressed… and not only that Pragg was playing his choices!

There were of course some inaccuracies by White, but overall it was a smooth and powerful win for Black.

The second game followed the same pattern, with Pragg again ready with impressive preparation, this time on the white side of the Caro-Kann.

This was my preparation. I knew Nbd2 and the c4-idea, and I think it’s pleasant for White. There are always some tactics around his king.

The tactics when they came were spectacular.

At first our commentators thought that Vincent was completely busted here with Black, but it turned out 21…Qd8! limited the damage. Vladimir felt this might have been a “lucky” resource for Vincent and a sign that things could go his way, but after 22.Bxe7 Qxe7 23.Qg5 Qxg5 24.hxg5 Nb4 25.Nxc5 Nxa2 Pragg continued to find key resources.

26.g6! kept Black on the ropes just when it seemed he might consolidate, and soon Pragg was totally on top.

The game was finished off beautifully… with one huge slip! 40.Kf1 was a strange direction to go with the king, and then 41.Ng1? entombed the white monarch. 41…Ne3+! would have been a killer blow.

Kramnik: Congratulations, I think it was another great match from you, even if I would still advise you for future not to put king on f1 and knight on g1 in the endgame!

Praggnanandhaa: After I played Ng1 I realised there was Ne3+!

Keymer missed that chance to level the scores, however, and at 2:0 down his task had become almost hopeless, especially given how his opponent was playing. Kramnik had earlier mentioned that the way Pragg was playing he could be a new Hikaru Nakamura, or a Top 10 player, and the compliments kept coming.

Vincent wasn't going to go down without a fight, however, and things briefly looked promising after 23…Qf7 in the 3rd game allowed him to pick up a pawn in exchange for swapping off queens.

27…Rh5! was the moment when it became clear Pragg was going to get at least the draw he needed to win the match, and indeed by the end he could have won a second match in a row 3:0. Vladimir Kramnik jokingly began the post-match interview:

So, very disappointing today! I mean, why didn’t you play for a win in the ending position?

After 43…R2h3+ 44.Kg2 Praggnanandhaa could win by taking either rook and eventually using his pawn majority on the queenside to clinch victory. Simply forcing the draw was the fastest way to end the match, however, and Pragg will go into Sunday’s final as the clear favourite.

It was 14-year-old US star Christopher Yoo who posted the best result of the day, however, clinching a 3:0 win over his 18-year-old US rival Awonder Liang.

Christopher was asked how he’d felt before the day began.

Not amazing before the match… I was definitely excited about the match, but I did not get much sleep. But I feel extremely good after the match! I couldn’t have asked for better.

The first two games were erratic for both players, with Christopher at first seizing a big initiative in the opening and finding some strong moves to whip up an attack.

22.c4! Bxc4 destabilised the bishop, gave White the e4-square and meant that a later Qh4 would tie the black queen to the defence of the bishop on c4. Awonder is an extremely tricky player, however, as we saw in the quarterfinals, and when he found 30…Qd2! he suddenly looked in complete control.

There was no choice but for Christopher to exchange queens with 31.Qxd2, and the attack was over.

It soon became only a question of whether Awonder would convert an extra pawn, until the hard to explain 46…Be2?? suddenly blundered away the bishop and Christopher made no mistake in wrapping up the game.

The second game was another rollercoaster, with Awonder going for a sacrifice but Christopher finding excellent counter-attacking moves. Again, however, it was suddenly curtailed when Awonder blundered a full piece, this time a rook, with 25.Qe4??

It seemed he’d missed the crucial difference 24…Qd7 had made to the position, which was of course that now 25…Qxa4 simply picked up a rook. 26.Qxe7 wouldn’t even limit the damage, since the d1-rook is en prise. Awonder played on with 26.Rd3, but soon resigned.

That left Awonder needing to win on demand with the black pieces, and he turned to a move that Lawrence Trent is now championing.

1.e4 b6 only led to trouble, however, with Christopher crashing through on move 11.

13…exd5 would run into the devastating 14.e6! and Black could resign.

Awonder met fire with fire with 13…Ndxe5 14.dxe5 exd5, but after 15.e6! Qg7?! 16.h6! it was all over bar the shouting. Awonder survived the king hunt, but only by swapping down into a dead lost endgame where Christopher had three extra pawns.

That game was a sign that Praggnanandhaa may not have everything his way in Sunday’s final. 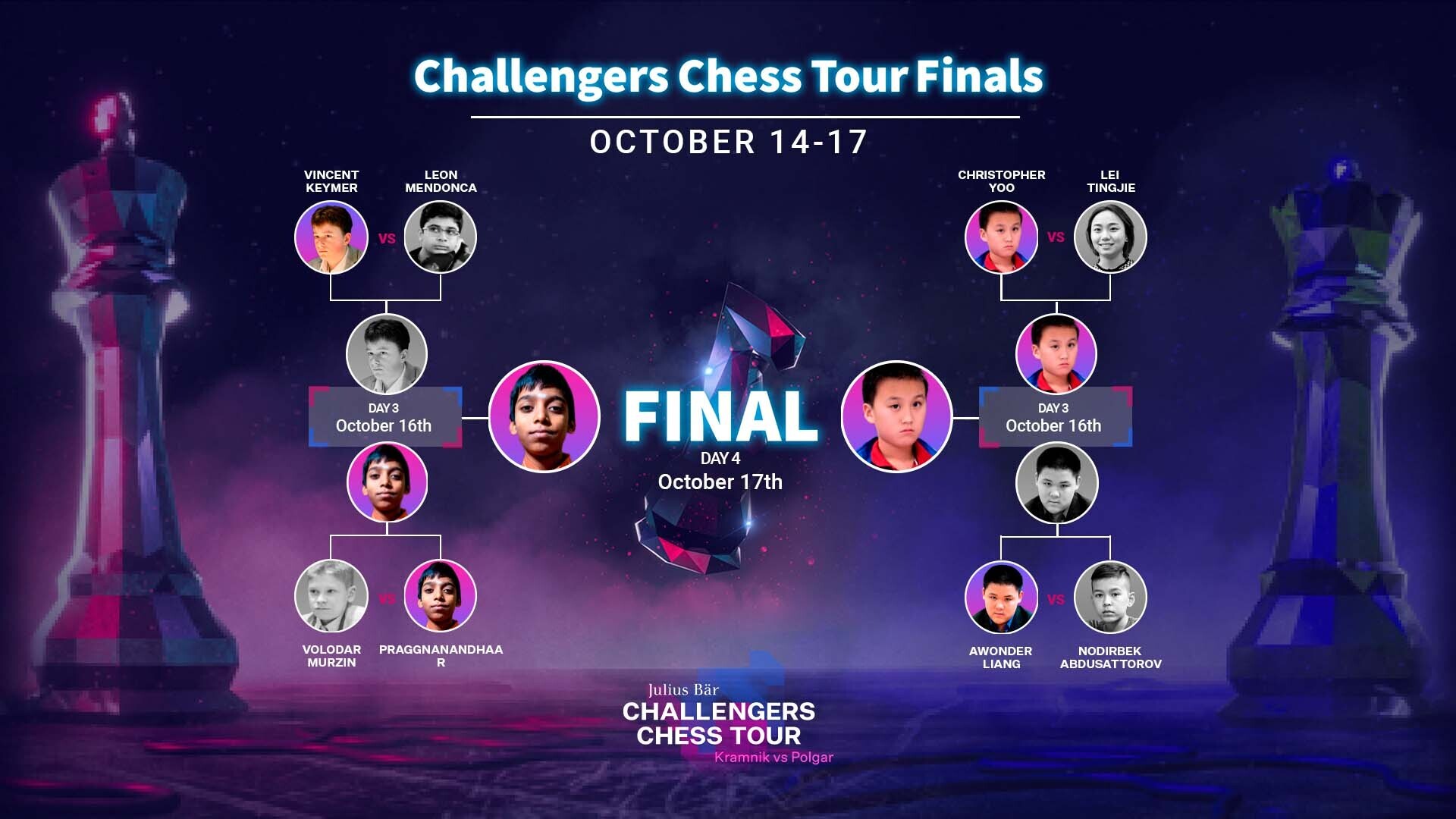