The 2017 Polish Championships kicked off yesterday in the Trading Room of the Warsaw Stock Exchange, with women’s top seed Monika Socko scoring a 122-move win over 3rd seed Karina Szczepkowska. The women’s event could hardly be stronger, while the men’s event is marred by absences, including that of Polish no. 1 Radek Wojtaszek and no. 2 Jan-Krzysztof Duda. Nevertheless, it’s a tough field, with Gajewski-Socko and Piorun-Bartel ending in dramatic draws in Round 1. 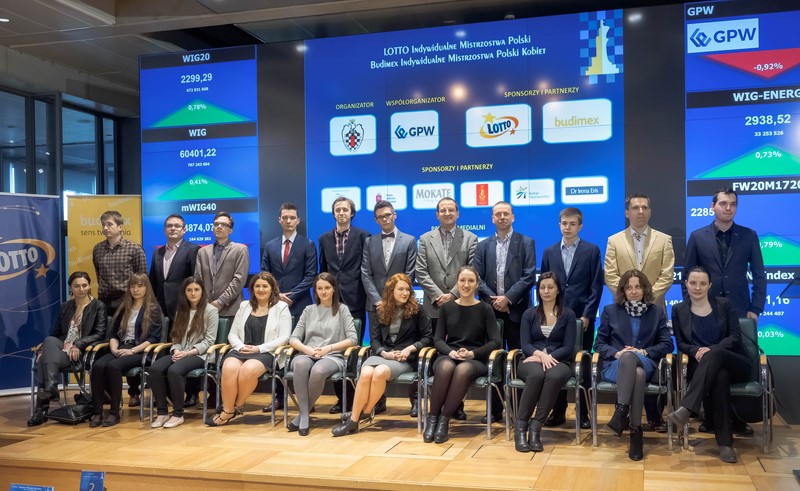 The Polish chess index is on the rise, at least in terms of chess venues! | photo: official website 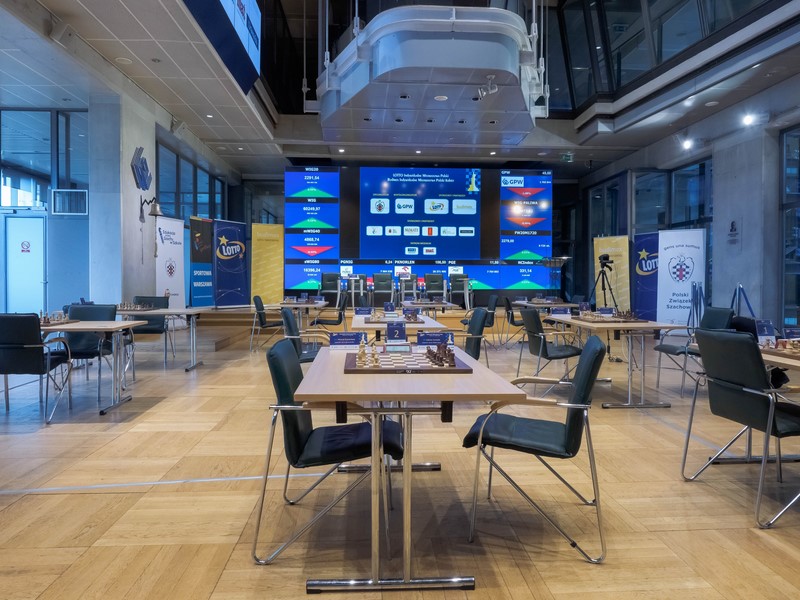 All set for some trading of pieces... | photo: official website

The 2017 Polish Championships are two 10-player round-robin tournaments taking place from 21-29 March in Warsaw. As in 2016, the sponsors LOTTO and Budimex are following the unusual policy for chess of offering exactly the same prize fund to the men and women, with both playing for a 20,000 PLN (about $5,000) first prize. In the women’s case, that helped bring together close to the strongest possible line-up, with the top 7 Polish female players on the current FIDE rating list, including 7-time Polish Champions Monika Socko and Iweta Rajlich and 3-time Champion Jolanta Zawadzka.

The remaining three players also add some youth, with 16-year-old Oliwia Kiolbasa and 15-year-old Alicja Sliwicka. The latter has already been U10 European Youth Champion and U14 World Youth Girls' runner-up.

Perhaps only Mariola Wozniak could be considered missing – the 19-year-old scored 6/6 in the Baku Olympiad as the Polish team took silver medals, but she skipped the event for her school-leaving exam.

All the games are live on chess24 (Open | Women) and the official website, with commentary in Polish by GM Marcin Tazbir and IM Michal Luch as well as assorted guests. 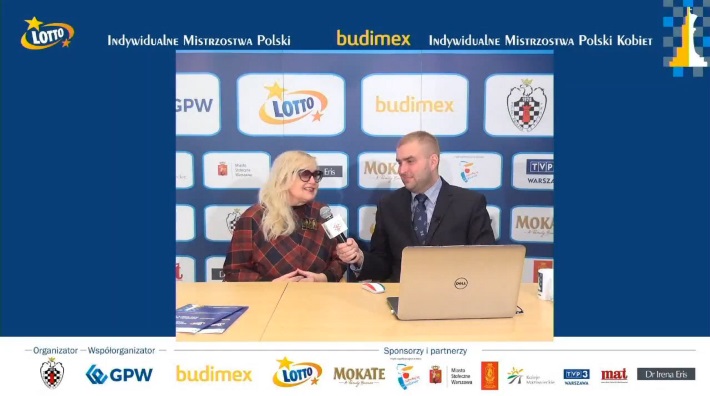 70-year-old Hanna Erenska-Barlo, who won the Polish Championship five times between 1971 and 1980 and was the first Polish Women's Grandmaster, joined Marcin Tazbir during the first round

You can click a game below to watch it with computer analysis, or hover over a player’s name to see their results and pairings:

In 2016 Radek Wojtaszek complained about the equal prizes for men and women, commenting:

There’s an argument that women's games are cooler, because more happens, but more happens just because the level is lower.

At the time he was making that comment Karina Szczepkowska bungled a better rook endgame against Monika Socko and eventually lost with the white pieces in 102 moves – Radek commented that it was “what the fight for gold looks like among the women”. Karina hit back to point out that the men were hardly immune from blunders, while it wasn't the men who were sponsoring the event.

Fast forward a year and the same two players were paired against each other with the same colours. The result was also the same, with Monika grinding out a win in a very tricky queen ending. There was no glaring blunder from Karina, but the game was notable for this time reaching 122 moves!

2nd seed Jolanta Zawadzka also got off to a winning start, finally finding a mating attack against Klaudia Kulon. The most topsy-turvy game was Joanna Majdan-Gajewska’s win over Anna Kantane. Black had a winning edge but went astray as complications coincided with time trouble. 30…Qe5? was a bad idea:

Black is threatening both to take the rook on f4 or the knight on e2 (with either queen or rook!), but White responded with the even more multi-purpose 31.Qg3! The e1-rook is defended and White threatens to win a piece with Rxg4+ or h3 (31…Rxe2 is also met by 32.Rxg4+!). After 31…Qxb2 32.h3 Joanna actually managed to give mate on move 39!

The men’s tournament is a different story this year, with five of the Top 10 missing. The most notable absentees do, however, have excellent excuses. 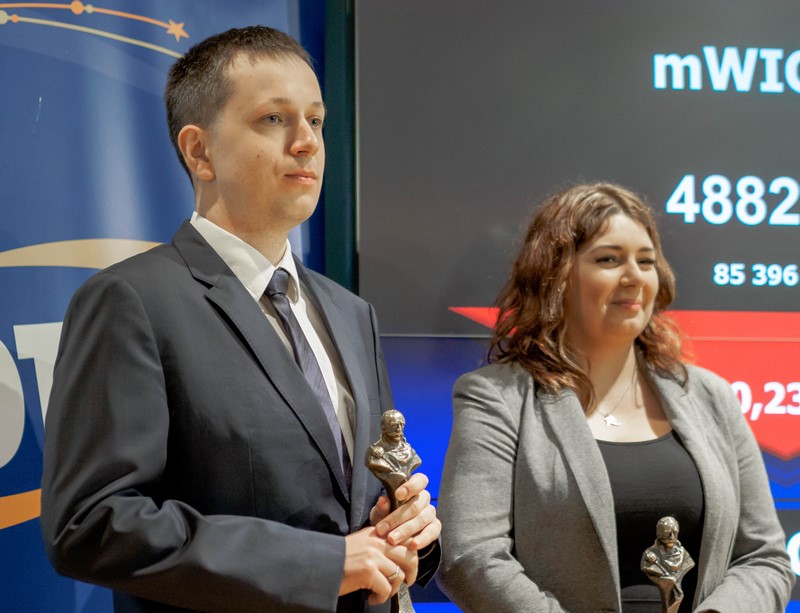 Radek Wojtaszek is second seed behind Shakhriyar Mamedyarov in the Sharjah Masters, a new open tournament in the United Arab Emirates that has a very impressive field. He did at least find time to win one Championship in Warsaw before catching his flight:

18-year-old Jan-Krzystof Duda, like Mariola Wozniak, is preparing for his matura, or school-leaving exam, though he did manage to win two games in the Bundesliga at the weekend, the second against none other than Wojtaszek! 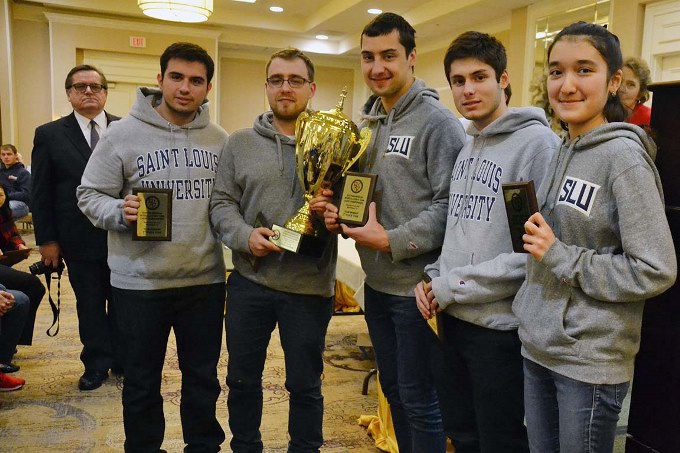 Darek Swiercz in the centre with his new teammates | photo: Saint Louis University

Dariusz Swiercz, meanwhile, is studying at Saint Louis University in the USA, in a chess program involving a partnership between the university and the Chess Club and Scholastic Center of Saint Louis (supported, of course, by Rex Sinquefield). Swiercz just finished in joint second place in the Winter Chess Challenge and will play in the "Final Four" in New York this weekend, where the team will come up against their local rivals Webster University as well as two teams from Texas.

Still, there’s no lack of competition in the players remaining.

The key clashes were the draws, though. Kacper Piorun finds himself as the top seed and looked to have excellent winning chances against 4-time Champion Mateusz Bartel.

Can Bartel become the king of Polish chess for a 5th time? | photo: official website

Black escaped, though, after spotting that Black could survive a very scary looking line:

The players admitted that there was plenty of play left in the position, but Bartel was happy to survive and felt it was dynamic equality. Piorun was down to under 7 minutes to Bartel’s 45 and also felt it was time to call it a day. 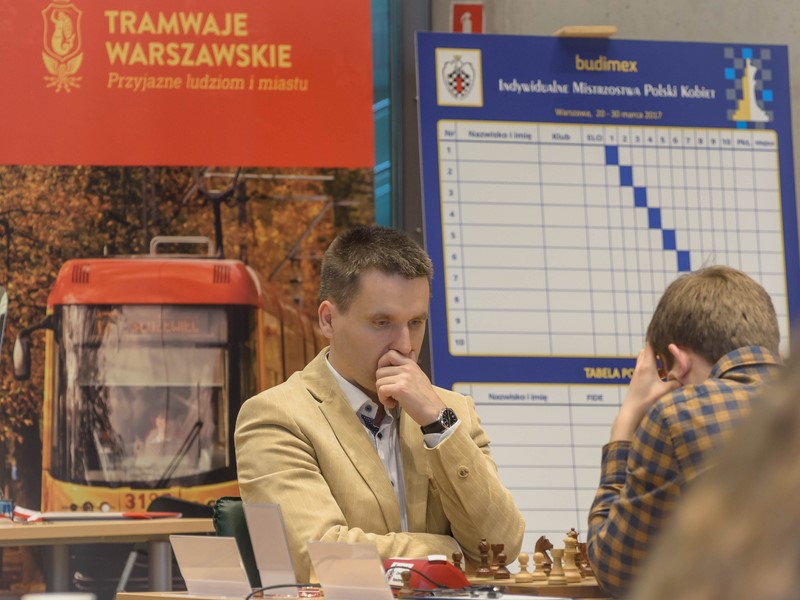 Gajewski-Socko, with a Warsaw tram in the background | photo: official website

No-one could complain about the draw in the other game, where Anand’s second Grzegorz Gajewski and Bartosz Socko played on for 99 moves until only two kings and a bishop remained on the board. It was ultimately a vindication of Socko’s decision to try and solve his problems with a piece sac:

39…Bxe4!? 40.fxe4 Qxg4+ 41.Kf1 Qxe4 Initially Black had three pawns for the piece, but the c4-pawn soon dropped and Grzegorz did a good job of consolidating his advantage. There was no refuge for the white king, though, and eventually a queen exchange was unavoidable: 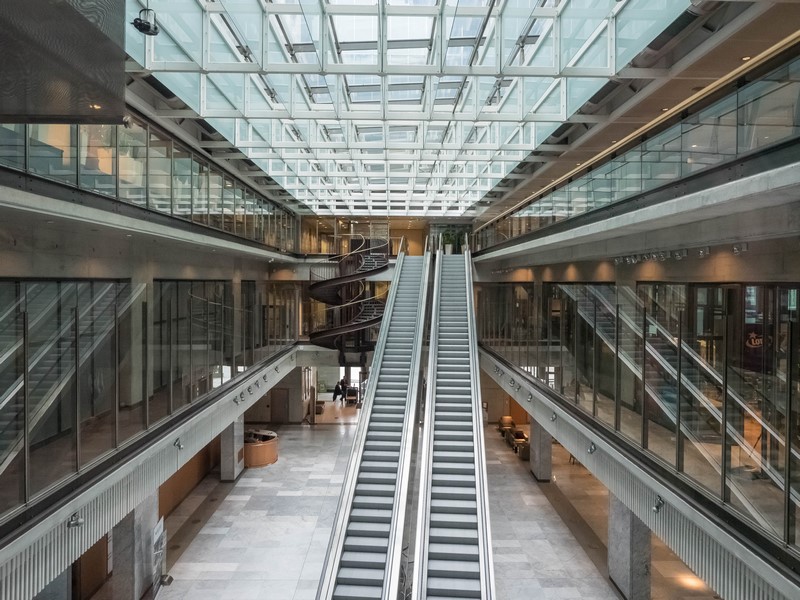 A glimpse inside the Warsaw Stock Exchange | photo: official website

The games are live here on chess24 from 15:00 CET each day: Open |  Women You can also watch the action for free in our mobile apps: