Praggnanandhaa leads Nodirbek Abdusattorov by half a point with one day of the Polgar Challenge to go, with the two stars set to meet in the 19th and final round on Sunday. That clash may well decide the fate of the wildcard to the next Meltwater Champions Chess Tour event, but both players losing in Saturday’s last round transformed the race. Nihal Sarin, who has lost just one game, beat Abdusattorov and is a point off the pace with US star Awonder Liang, who scored a perfect 5/5. Vincent Keymer is 1.5 points back after taking down leader Praggnanandhaa. 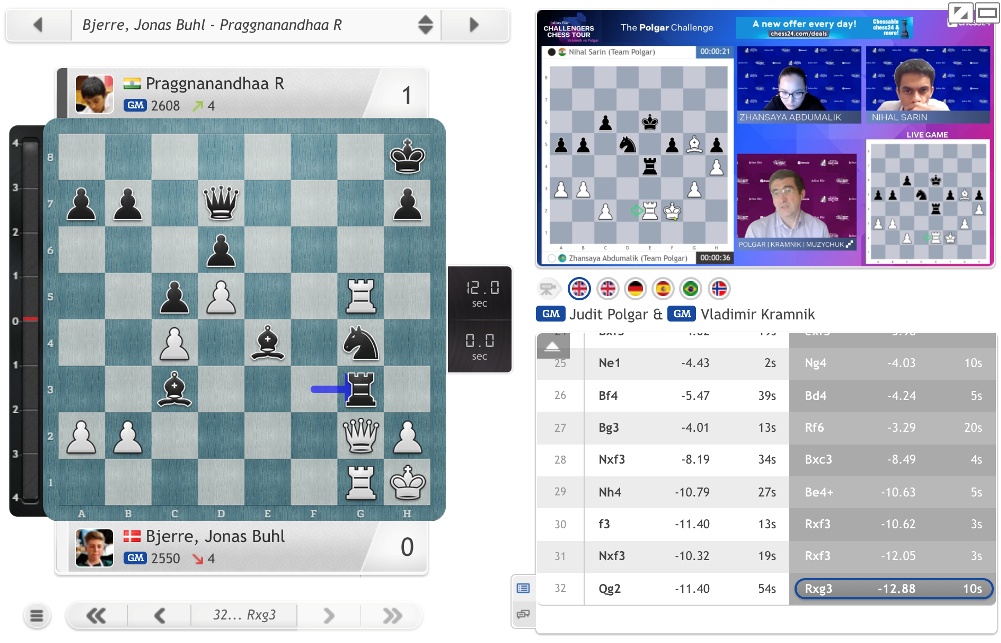 Praggnanandhaa is sole leader and got to have some fun on Saturday, but his loss in the last round has opened up the race

You can replay all the games from the Polgar Challenge, the 1st event on the $100,000 Julius Baer Challengers Chess Tour, using the selector below.

And here’s the day’s live commentary, where Judit Polgar and Vladimir Kramnik were joined by Hou Yifan and Anna Muzychuk, both coaches of the Challengers Chess Tour players.

14-year-old IM Christopher Yoo had been the surprise star of the first two days of the Polgar Challenge, going into Day 3 as the only unbeaten player and just half a point behind Praggnanandhaa. He had a chance to leapfrog the leader in the very first game of the day, and must have felt he had chances after 5…h5!?, a favourite of Pragg’s Indian colleague Aravindh.

Initially the opening went well for Christopher, but his attempt to punish his opponent backfired and for once his spectacular attack was easily parried.

That first loss was followed by almost losing to Nurgyul Salimova in the next game and later a loss to Awonder Liang. It was only a forfeit win against Dinara Saduakassova, who had to pull out due to internet issues, that allowed Christopher to score 2/5, 1.5 points less than any other male participant on Day 3.

For most of the day it looked as though Pragg and Abdusattorov were engaged in a two-horse race, with both conceding just a single draw – Praggnanandhaa let a winning endgame slip against Gukesh, while Nodirbek was well held by Sara Khadem. In the last round, however, they both lost seemingly innocuous positions. Vincent Keymer scored a 4th win in a row by grinding down Praggnanandhaa in a slightly better endgame, while Abdusattorov badly misplayed a better position against Nihal Sarin.

Nodirbek could simply have exchanged off minor pieces on e5 and played for a win at zero risk, but instead he began to get inventive with 28.h4!? gxh4 29.f4 Ng4+. That knight on g4 would eventually become a monster when it was joined by the black queen, and for the second time in the tournament Nodirbek had suffered an entirely unnecessary loss.

Nihal Sarin had been given a boost before the day began when his draw against Dinara Saduakassova was converted into a win - her withdrawal due to internet issues led to the decision to make all her games forfeit wins for her opponents. Nihal has been arguably the most stable player and drew the first three games of the day, while wins in the last two left him just half a point behind Nodirbek and a point behind Praggnanandhaa. He's also the only player to have lost just one game.

Nihal is joined in 3rd place by Awonder Liang, who won all his games on Saturday (one a forfeit against Dinara) for a perfect 5/5, and a run of 8.5/9. The US teenager outplayed most of his opponents, and also caught Zhu Jiner right at the end in a tricky endgame.

Half a point behind Awonder and Nihal is Germany’s Vincent Keymer, who missed a win against Nihal in the first game of the day but shrugged that off to win the next four, including an impressive grind against Praggnanandhaa.

Other star performers of the day were Leon Mendonca (4.5/5) and Volodar Murzin (4/5 – the Russian 14-year-old hasn’t made a single draw in 15 rounds!). Gukesh, Yoo and Murzin are tied for 6th place on 10/15, but the two-point gap to Praggnanandhaa is likely to be too much to make up in just four rounds on Sunday.

Chinese stars Lei Tingjie and Zhu Jiner had ensured there were female representatives in the top half of the table for the first two days, but by Round 13 the Top 10 were all male. Judit Polgar felt the underperformance of female players in general is partly down to the lower ambitions of those around them – coaches often talk about talented young male players as future world champions, while for female players they might target the women’s world championship.

In this case there were also other considerations. The boys are simply higher-rated, on the whole, with 14-year-olds Christopher Yoo (2455) and Volodar Murzin (2478) no doubt under-rated both due to not playing rated games during the pandemic and their age. Jennifer Shahade pointed out the rating differences between the male and female players might be greater if you took into account ratings on online playzones. The reason we use classical ratings, incidentally, is that if we used the “correct” FIDE rapid ratings we’d have, for instance, Praggnanandhaa rated 1781!

On Saturday Carissa Yip provided one of the few bright moments in the battle of the sexes when she defeated Gukesh convincingly with the black pieces.

In the tournament so far, however, it's been more about near misses for the female stars. For instance, Nurgyul Salimova came close to a win against Gukesh and even closer against Jonas Bjerre.

48.Bg8! is announced as mate-in-18 by the computer, but you don’t have to see that to see that 48…Rxf2+ is just one check, and after 49.Kg4 Black will have to give up a piece to avoid mate. 17-year-old Nurgyul’s 48.Ra8 of course had a similar idea, and didn’t spoil the win, but the black bishop was able to escape and ultimately Jonas went on to hold.

It’s not male vs. female, however, but Team Kramnik vs. Team Polgar, and in that race it’s Judit Polgar’s students who’ve taken a 75:71 lead. Note only the top 9 players on Team Polgar are counted, to balance out the missing Dinara Saduakassova for Team Kramnik. 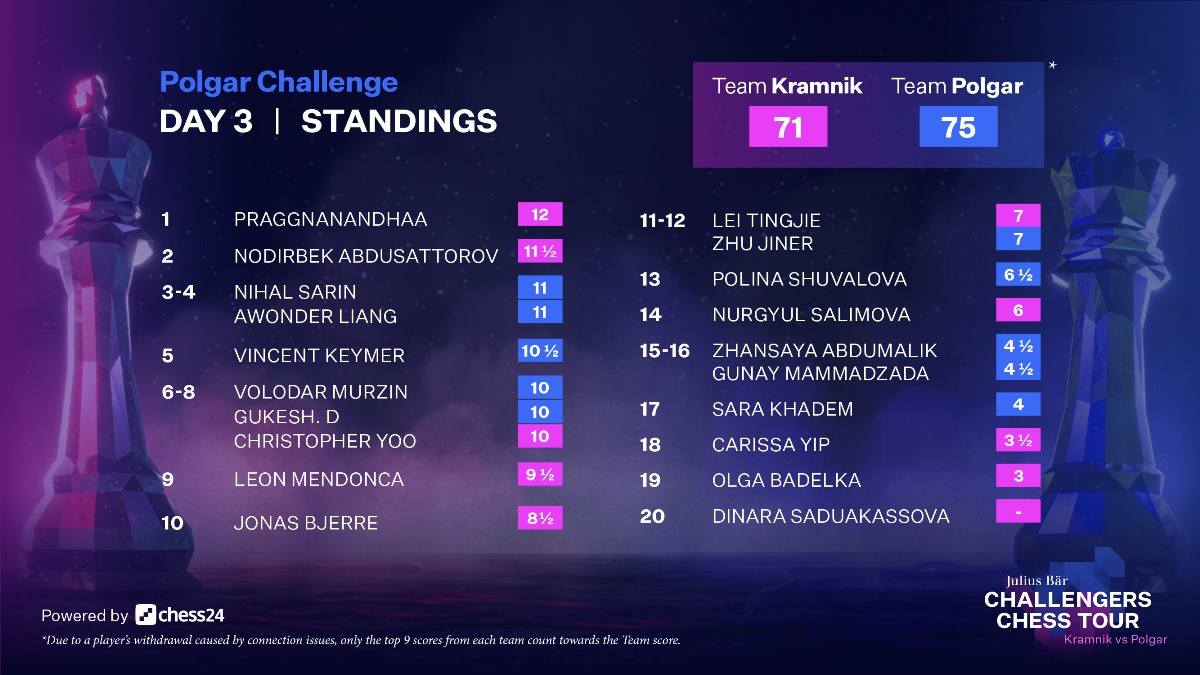 The fate of the $3,000 top prize, and more importantly a place in the next Meltwater Challengers Chess Tour event, will be decided in the final four rounds on Sunday. It could all come down to Abdusattorov-Praggnanandhaa in Round 19, with Vladimir Kramnik sharing his thoughts on deciding games.

It doesn’t always work, of course, with Kramnik also sharing a memorable failure on our broadcast!