Magnus Carlsen only appeared in the line-up for the 1st 16-player qualifier of the prestigious MrDodgy Invitational 3 when David Howell dropped out with an hour to spare. Magnus went on to dominate, though he did lose to Kamil Plichta, Gawain Jones and Alan Pichot. Magnus now plays Salem Saleh in the knockout stages. 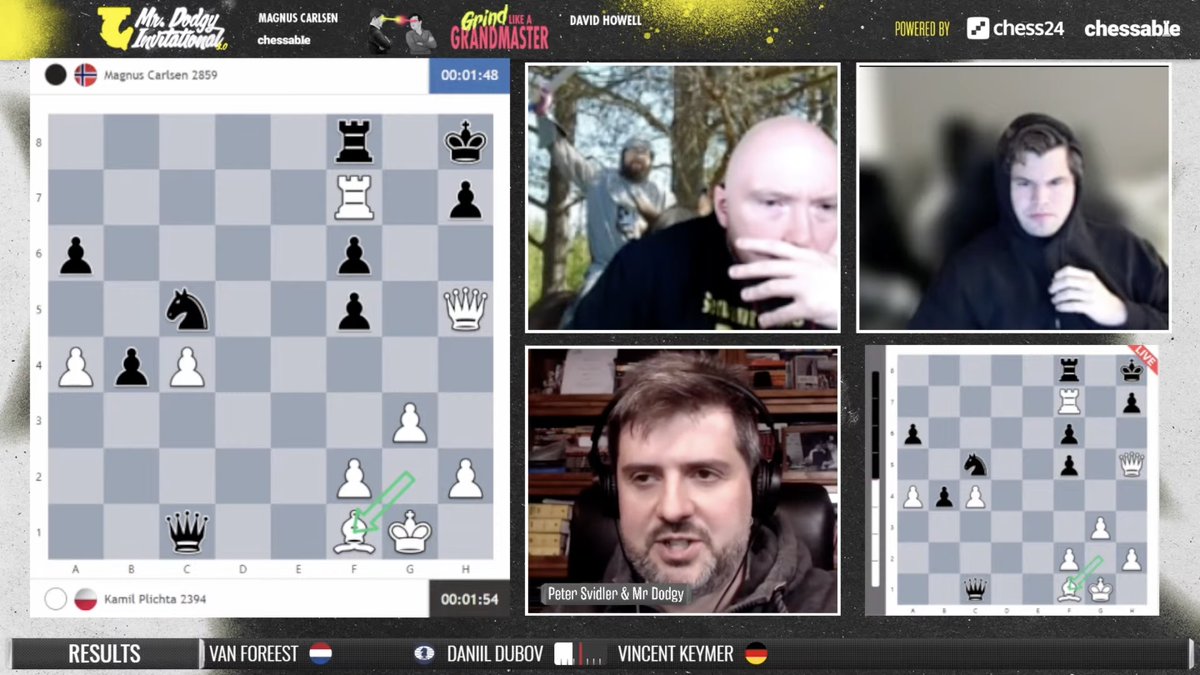 Last year’s MrDodgy Invitational was a 16-player knockout, but this year, to give more players a chance, it began with 32 players, a field that would be cut in half by two 16-player round-robin events.

2-time Champion Anish Giri has risked MrDodgy’s wrath by not competing this year, but when David Howell was having internet problems, David came up with a halfway decent replacement…

It so happened Magnus’ first round opponent was therefore a certain Rauf Mamedov, who recently resigned against Magnus on move 1 as he considered 1…g5 to be “mockery”.

It was possible to speculate what first move we might see in the 5-minute online blitz tournament.

As it turns out, Rauf hadn’t got the memo that he was playing Magnus not David (Magnus played on David's account), so even 1.g4 might not have led to disaster. Instead Magnus “mouse-slipped” 1.g3 instead, and went on to win.

That result was actually key to the standings, since Rauf followed up with a stunning 8.5/9 before cruising in the remaining games to finish in 3rd place. Magnus scored 11 wins as he took the top spot. 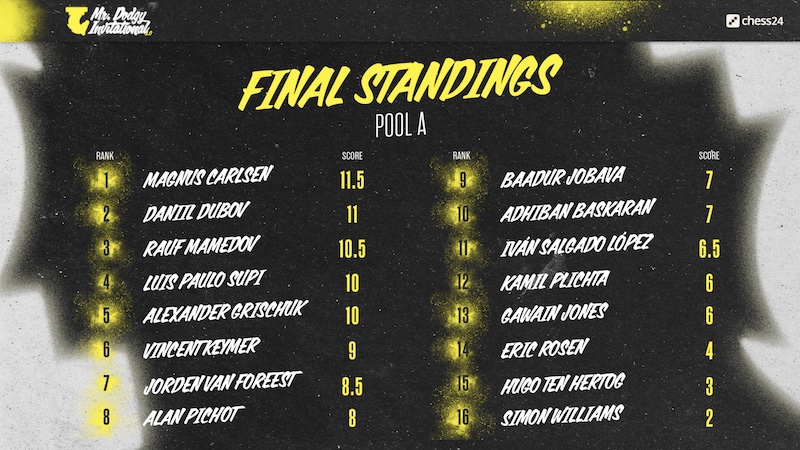 Magnus was in top form, and also got to have some fun.

It wasn’t entirely smooth sailing, however. 1.h3 eventually saw Magnus lose to Alan Pichot, although he had been completely winning earlier in the endgame.

Alan qualified for the knockout along with another South American, Brazilian GM Paulo Supi, who finished in 4th place and inflicted the only defeat on Alexander Grischuk.

Gawain Jones also claimed the scalp of Magnus, tricking the World Champion at the end — when the king moves, Rc2+ will win the rook on h2.

The most memorable win, however, came for 2400-rated Polish FM Kamil Plichta, who came into the event with the right spirit.

He opened with his beloved Trompowsky against Magnus. It’s an opening the Polish FM is known for, with his Trompowsky Chessable course, aptly titled “Break the Rules”, a bestseller. Kamil played 1.d4 Nf6 2.Bg5, with Magnus replying 2…b5!? and ultimately getting a close to winning position… until 22…Qd4?

There was no stopping Kamil, who celebrated and couldn’t stop smiling when he won the game.

Alas, a few more wins spoiled his plan for the remainder of the event.

The top 8 players qualified for the knockout, which was also the case from Saturday’s 2nd qualifier. This time it was Laurent Fressinet who tried to escape at the last moment…

He didn’t manage, though, in an event where fan favourites such as Laurent, Lawrence Trent and Peter Svidler struggled. Note Andrey Esipenko didn’t make a move in the end, since his Bundesliga game lasted too long. 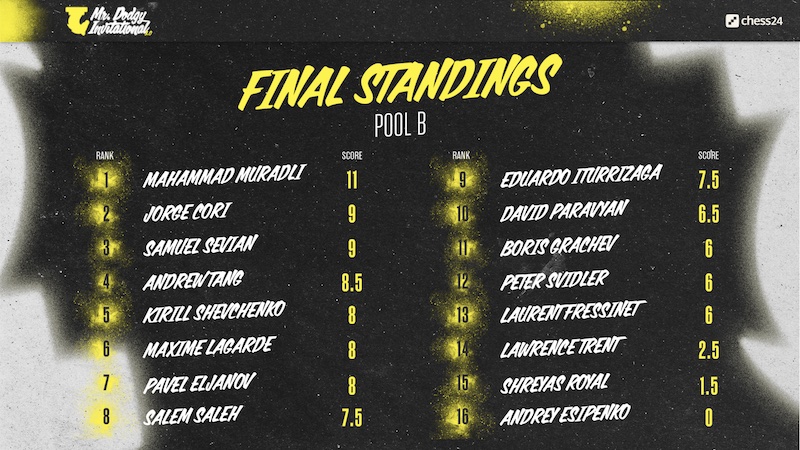 The biggest surprise, of course, was the 1st place for 19-year-old two-time Azerbaijan Champion Mahammad Muradli, who won an amazing 10 of his first 11 games. Mahammad has been surprising people for some time now — in 2015 he won the World U12 Youth Championship ahead of Nihal Sarin, Nodirbek Abdusattorov, Awonder Liang, Alireza Firouzja, Vincent Keymer and Hans Niemann. Whatever happened to those guys? 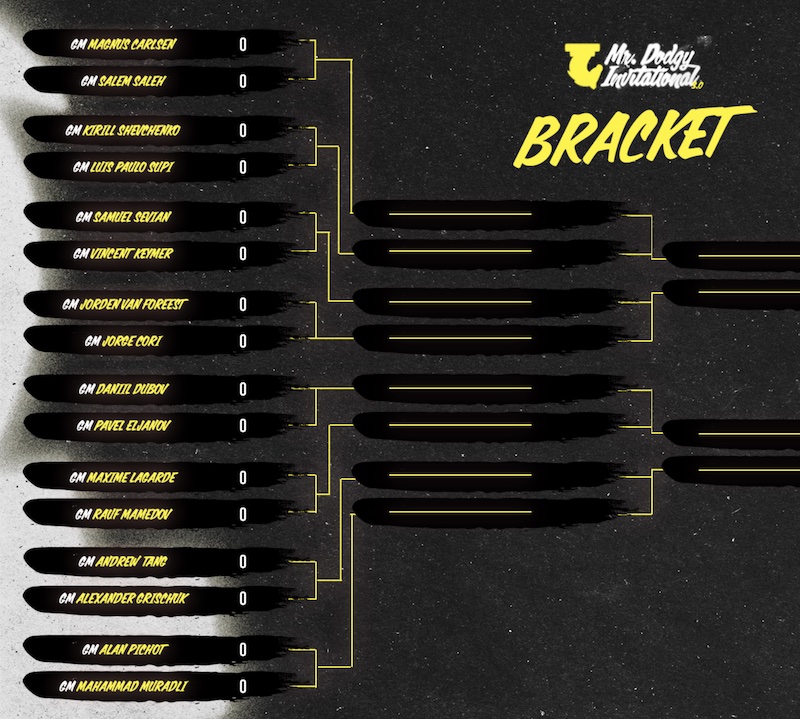 It all kicks off today, Sunday 27th November, with Dubov vs. Eljanov at 17:00 CET, followed by Carlsen vs. Saleh and Lagarde vs. Mamedov at 19:00 CET.

It wouldn’t be the MrDodgy Invitational if there wasn’t a video!