Peter Svidler: The Glory Days of 1999

In the following half-hour video seven-time Russian Champion Peter Svidler tells the story of how he lost to three World Champions in quick succession back in 1999. His account of losing the same topical Grünfeld position against Kasparov, Anand and Karpov is quintessential Svidler – self-deprecating, erudite and very funny!

Don’t miss the whole video, but if you don't have the time right now here are a few highlights:

Many people consider Garry Kasparov’s victory against Veselin Topalov from this same tournament to be his best ever game, but the great champion himself disagreed: “From the professional point of view, I believe that my game with Svidler is even better”.

Svidler describes the thought processes of his 22-year-old self:

I thought, "wouldn't it be interesting to find out what will happen to me if I play the Grünfeld against Kasparov?" A feeling not of invincibility, as such, but of wonder… I knew this wasn't going to be a walk in the park but I was very interested to see what he would show if I did it. And he did show something... 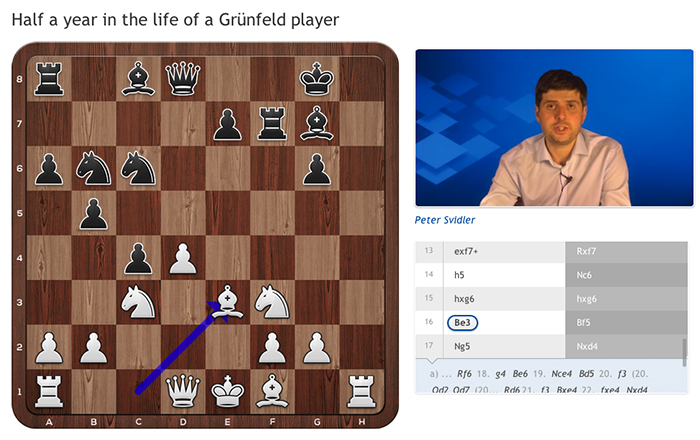 
On this occasion Svidler broke the chess rule about not speaking to your opponent during a game except to offer a draw. You need to watch the video to find out what exactly he said, but his kamikaze reasoning included:

When looking at this position I realised I had my chance to enter the history books here and now and thought I had to grab it with both hands - a decision which will probably get me laughed out of the room in most polite company, but I just thought I had to do it because when would my next chance come?

Svidler lost to a characteristic Karpov positional squeeze, and summed up his decision-making as follows:

It's notable how I chose exactly the wrong positions against perhaps all three players. I chose an incredibly messy position by design against Vishy, who I have to say is very, very good in messy positions. I chose to try and withstand a direct attack against Kasparov and I chose a slightly worse endgame against Karpov. Well played me!

Perhaps only Peter Svidler would have chosen to highlight this particular sequence of events in a series on his favourite opening, but it didn’t dampen his enthusiasm!

As you can perhaps glean from this video 99 wasn't a particularly good year for me. By the end of it I was out of the Top 20 and out of the 2700 club and I think it took me the best part of two years to recover from that half-a-year stretch. But I did eventually recover and I didn't stop playing the Grünfeld. I never really blamed the Grünfeld for any of this.

In the video interview below he talks about the series with former FIDE World Champion Rustam Kasimdzhanov:

You can now find the whole series here!