The Russian Championship Superfinal was held in a new venue in Nizhny Novgorod, with the ten participants including ex-World Champion Vladimir Kramnik, the defending Russian Champion Dmitry Andreikin and “our man”, Peter Svidler.

Right from the off the 37-year-old from St. Petersburg was in top form. He varied his openings, stayed sharp in tactics and played with real strategic verve. After defeating Nepomniachtchi, Shomoev and Andreikin and drawing Kramnik he took an early lead on 3.5/4. In the 6th round he scored another win against Alexander Motylev:

55. c7 Ignoring the fact that the knight on c3 is "hanging" with check.

55... ♗xc3+ 56. ♔e2 And as Black can do nothing to stop the pawn queening, with a decisive material advantage, Motylev resigned. 1-0

The only person who by this stage was managing to keep pace with Svidler was Vladimir Kramnik. The 38-year-old ex-World Champion played very creatively but slipped up in the 3rd round against Dmitry Andreikin, who he’d dominated in the final of the Tromso World Cup.

The status quo was preserved until the final round. Svidler was leading by half a point ahead of Kramnik and Ian Nepomniachtchi, who were drawn against each other. While Svidler drew with some difficulty against Sergey Karjakin his pursuers fought on to the bitter end. Kramnik was on top in the endgame but he pressed too hard for a win and ultimately had to admit defeat. Nepomniachtchi was “suddenly” level on points with Svidler and a rapid-chess tiebreak would decide the Russian Championship.

Nepomniachtchi proved no match for Svidler: 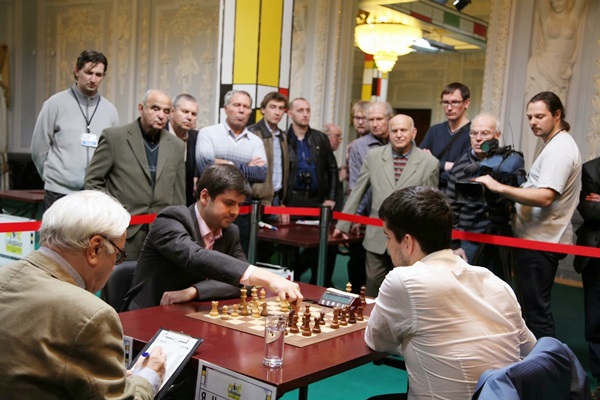 A confident Svidler has White in the first game | photo: Eteri Kublashvili

31. ♗h5! Upping the pressure the rook on f1 was already applying to f7.

34... f6 35. ♖b6 Black is powerless. The pressure on his position is unbearable and it's impossible to avoid losing more material. The threat is 36. Bxd6 followed by 37. Qxe7. Nepomniachtchi resigned. 1-0

‌In the second game Nepomniachtchi was unable to get any advantage with the white pieces and offered Svidler a draw in a lost position after 27 moves.

That gave Peter Svidler the Russian Championship for a seventh time after his previous victories in 1994, 1995, 1997, 2003, 2008 and 2011 – an incredible achievement given no chess nation can match Russia for strength in depth. 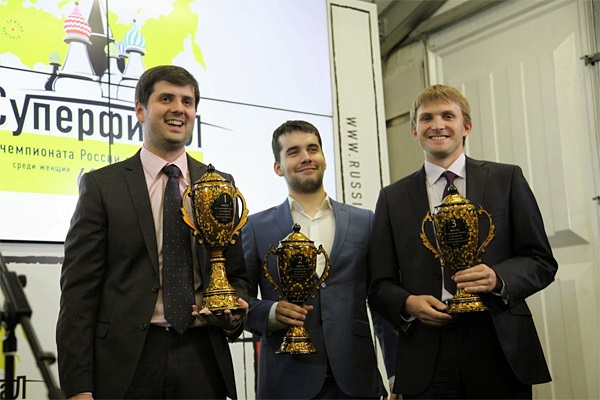 As you can see from the photo, Svidler was pretty happy! Or as he put it on Twitter: