In the introduction to his latest Banter Blitz session, Peter Svidler paid tribute to Viktor Korchnoi, who died this week at the age of 85. Peter recalls winning their first game, but falling victim to Korchnoi’s famously sharp tongue afterwards. He saw it as “a rite of passage”, adding, “if you get insulted by Viktor after the game you’re doing something right”. Korchnoi hit back in their second encounter, which Svidler describes as “a tremendously beautiful game”. Play through the moves and watch or read Peter’s thoughts below. 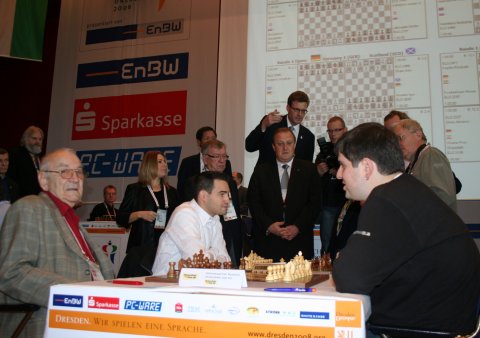 Korchnoi won 6 team and 3 individual Olympiad gold medals playing for the USSR - after defecting in 1976 he won one more individual gold for Switzerland in 1978 and played in 10 more Olympiads. Here he faced Russia and Svidler in his last Olympiad in Dresden in 2008. The game finished in a draw - their last encounter | photo: ChessBase

Svidler and Korchnoi were both born in what at the time was the Soviet city of Leningrad, and despite a 45-year age gap they managed to play nine hard-fought games. It was natural, therefore, that Peter would devote the start of a 3-hour blitz session to talking about “Viktor the Terrible”.

We’ve transcribed Peter’s comments below with only very minor alterations:

Before we start, something needs to be said about the very, very sad news from Switzerland. Viktor Korchnoi died this week, which is obviously a huge loss for the chess community. He was a brilliant, brilliant player and a tremendously interesting person – a very controversial person, of course, but a tremendously interesting person. Tributes are coming in from everywhere, understandably, and I have my own stories of encounters with Korchnoi, but I don’t want to spend too much time recollecting those.

My first encounter with him was, I think, in 95 [it seems it was 96]. I won my first ever game against him. He didn’t say anything to me after the game, and as some of you probably know, getting insulted by Korchnoi after the game is kind of a badge of honour. Not everybody wears it this way - I know some people who were terribly upset about some of the things he said to them after games - but to me it always felt that it’s a rite of passage. If you get insulted by Viktor after the game you’re doing something right, I guess.

I won my first ever game against him and he didn’t say anything after the game – he shook my hand and left – but later that day we met by chance in an elevator. It was a Groningen Tournament. He looked at me and said, “Young man, you’re a very, very superficial player. I could have made a draw at any point had I wanted to, but I wanted to beat you, and this is what happened”.

He was right on more or less every count, including me being a very superficial player, but that was, I think, the extent of it, because the next big game we played he beat me in a tremendously beautiful game in a King’s Indian. If you haven’t seen that it’s a game I lost to him in 97, I think, in a closed tournament in St. Petersburg. You should really check that out – it’s available on the internet everywhere.

He played a fantastic game against me. At one point, in a position which looked very promising for him, he paused for about an hour, looking for a forced solution. That obviously also gave me an hour to calculate things, and I spent the entire hour looking for something for him and couldn’t find a forced win. I was just about beginning to think that I might survive it, and then he finally sort of woke up and blitzed out about a 10-move sequence which does win by force. A very unusual and a very beautiful sequence, and I said as much to him after the game. I like chess played well, even if it’s played well against me, perhaps even more so when it’s played against me, because I’m a participant then. I said as much to him after the game and he took it rather well. I think he liked when people complimented him when he played chess well - which was often.

I never got any more insults from him, which is maybe regrettable, but, as I said, there are, I think, people who are better equipped than me for doing a proper tribute to a great, great player, but I’ve been privileged to play against him and also play for the same club as him. He was a very, very inspirational person in every respect, so he’ll be one of the true greats of the game forever. There can be no doubt about that.

For more about Korchnoi see our obituary, and also the short video tribute below:

Peter Svidler will now comment on the Paris Grand Chess Tour live with Jan Gustafsson, with the action starting at 14:00 CEST on Thursday 9 June. Don’t miss it.