Peter Leko: One draw from the title

At 40 years old, Peter Leko is the youngest of the legends in the chess24 Legends of Chess, but the Hungarian began his chess career early and rose fast. At 14 he set a new record as the youngest grandmaster in history, and by the age of 20 he’d reached the Top 10, where he would stay for a decade. The defining moment of his career came in 2004 at the age of 25, when he was within one draw of claiming the World Championship. Instead Vladimir Kramnik won, tied the match 7:7 and held onto his title. 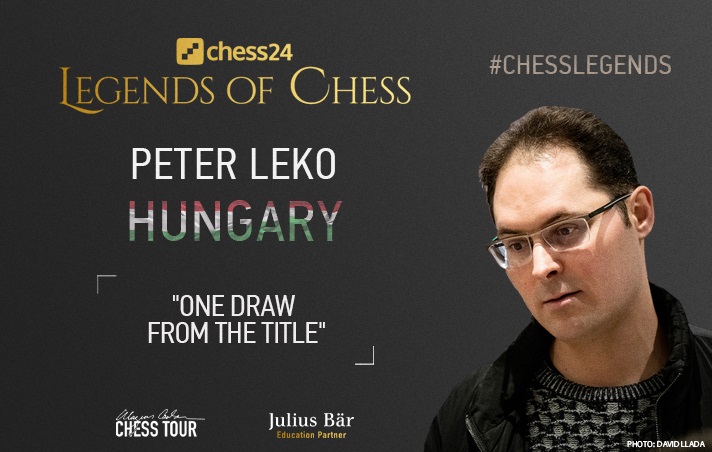 Peter Leko grew up in Szeged, Hungary, where his father taught him the moves at the age of 7. The youngster took to the game fast and recently credited none other than 8th World Champion Mikhail Tal for fuelling his enthusiasm for chess still further:

In 1994 he made headlines by breaking Judit Polgar’s record to become the youngest grandmaster in history at 14 years, 4 months and 22 days. He won the U16 World Youth Championship in the same year, but had already outgrown junior chess.

In the 1995 Dortmund super-tournament 15-year-old Leko finished joint third with Vasyl Ivanchuk, behind only Vladimir Kramnik and Anatoly Karpov, and that was only the start of his Dortmund story. He won his first super-tournament there in 1999, ahead of Kramnik, Karpov and Vishy Anand, and at the same event met both his wife Sofia and his wife’s father, GM Arshak Petrosian, who would go on to become his coach. Arshak recalled:

A year later I again played in the Dortmund side tournament. My daughter came to the rounds to root for me, and she met and then got to know Leko. It seems Peter and her immediately hit it off. They began to go out… Of course Peter came to our house, and how could we not look at chess? We pushed the pieces together, and after he and Sofia got engaged he came with his manager and suggested that I work as his main coach. To do that I had to move to Hungary.

Back to Dortmund, however, which in 2002 functioned as a Candidates Tournament to decide Vladimir Kramnik’s first challenger since snatching Garry Kasparov’s World Championship crown. It began with two group stages, where Peter qualified in second place behind Evgeny Bareev while Mickey Adams and Alexander Morozevich were knocked out. Leko then went on to beat Alexei Shirov 1.5:0.5 and Veselin Topalov 2.5:1.5 to set up a match against Kramnik.

While the players waited for the match to be arranged they found time to jointly win the 2003 Linares Tournament, best known for 15-year-old Teimour Radjabov beating Garry Kasparov with the black pieces. The match itself in 2004 was just as close, with Kramnik winning the first game but then Leko striking back in Game 5 before taking the lead in Game 8 after finding a gaping hole in Team Kramnik’s Marshall preparation at the board.

Suddenly Leko, known for being a rock-solid chess player, could draw his way to the World Championship title, and he very nearly got there, reaching the 14th and final game still leading by a point. Destiny was on Kramnik’s side, however, as he managed to win on demand with the white pieces and tie the match at 7:7. The regulations at the time meant that Vladimir held onto the title without a playoff.

It was a bitter end to a World Championship dream, but in the immediate aftermath Peter put his preparation and form to good use, particularly by winning Corus Chess 2005 in Wijk aan Zee, where he took clear first ahead of Vishy Anand, Veselin Topalov, Vladimir Kramnik and many more star names.

In 2006 he shared first place in the inaugural Tal Memorial and in 2008 Peter picked up another Dortmund title as well as individual gold in the Olympiad, but he never got close to the World Championship again. In 2005 he finished 5th in the San Luis World Championship tournament (won by Veselin Topalov) and then 4th in Mexico in 2007 (won by Vishy Anand).

Peter gained an often unfair reputation for making too many draws, and when draws began to be interspersed mainly with losses a crisis arose. He dropped out of the Top 10 in 2010, and finishing last in that year’s Dortmund encouraged him to take a long break from chess, even if his taking a break from chess is easier said than done:

Yes, that was the original plan. But after two weeks I sensed I couldn’t get by without chess, it was my life, and I started to work on it. I decided that I wouldn’t play before the World Team Championship, and it was very pleasant simply to work while not experiencing the continual stress of knowing that tomorrow you’re again playing against Anand, Kramnik, Aronian or Carlsen, and you’ve got nothing in the opening!

Though he came back in style with a 2800 performance in the World Team Championship in 2011, Peter has never since returned to the very top level.

Instead, while semi-retired as a player, he’s taken on other challenges such as coaching German prodigy Vincent Keymer (who is currently 15 and leading in Biel) and, to the delight of chess fans everywhere, commentating on major tournaments. Peter’s enthusiasm for the game is infectious and he also has a wealth of stories about great players, including how Bobby Fischer stayed at his house for a year and a half in 1998-99:

It’s a decent bet that he’d be commentating on the chess24 Legends of Chess if he wasn’t playing in the tournament!

You can support Peter, or simply pick up a unique souvenir of this event, by purchasing one of the special items in our store.