Wesley So drew all three games on Friday to keep a one-point lead over Karjakin and Nakamura at the Paris Grand Chess Tour. Meanwhile, Fabiano Caruana and Maxime Vachier-Lagrave won two games each to improve their chances before the start of the blitz section. Eighteen rounds of 5-minutes games (with a 3 second-delay) will be played over the weekend. 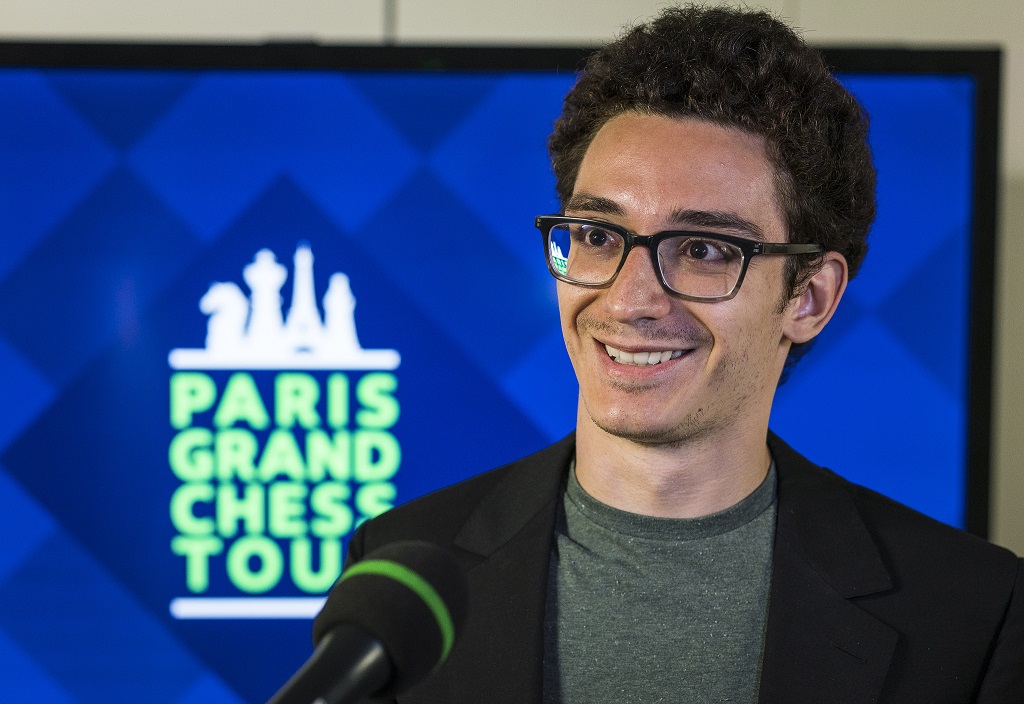 Fabiano Caruana played actively in the opening of his seventh round game against Vladimir Kramnik. The former World Champion had an extra pawn and the pair of bishops, but White's activity proved to be enough to eventually get an exchange in return:

Kramnik can't save his rook with a move like Ra6, as any of White's captures on d7 would be very strong. First, Black tried to distract the queen with 20...h5 — if the queen captures the pawn, the pin with 21...Ba7 would equalise. Fabi, of course, saw this and played 21.Qe2. A couple of moves later, he captured the rook and a sharp tactical battle followed. Kramnik missed a chance to get a large advantage on move 37:

Black increased the pressure on the long diagonal with 37...Qb8, but the surprising 37...Qh6 would have given Vlad a big plus — the rook is under attack and the threat of 38...g5!, winning the queen, makes it impossible to save it. After this miss, things went south for Kramnik, who fell victim to White's invasion with queen and rook on the back-rank. This was Caruana's first win in Paris. 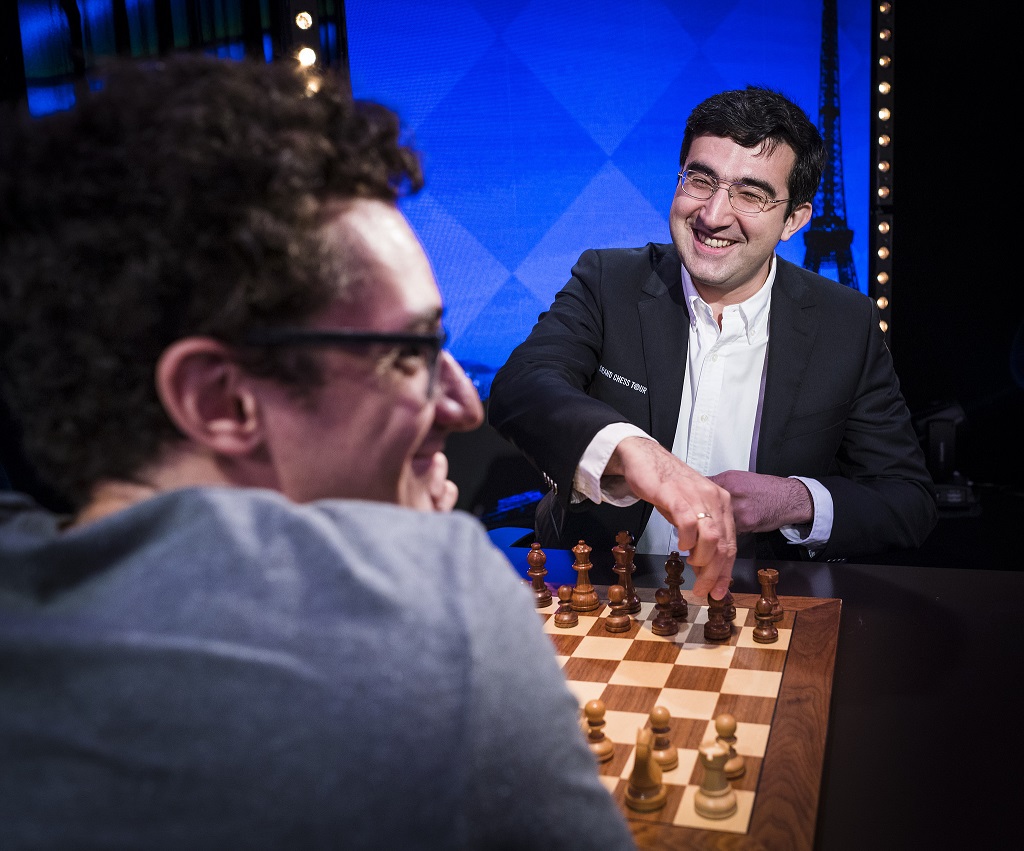 In the second game of the day, Fabi faced Levon Aronian with the black pieces. A Italian Bishop Opening left the position tensely balanced. Black had a bishop for a knight, but White had a better structure. Things seemed to be under control until Aronian missed a fork that gave up a pawn:

Levon played 35.Nge2 and Fabiano answered with 35...Qxh2+. After 36.Kxh2, Black, of course, recovers the queen with 36...Ng4+. The conversion was not that simple, but the World Championship challenger eventually added two points to his overall score. 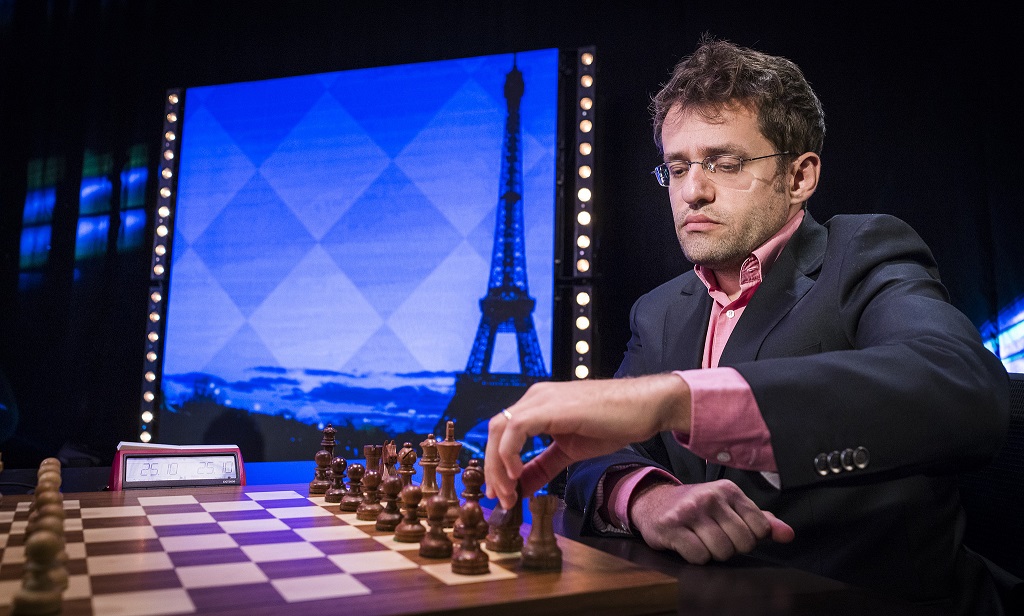 Things could have gone even better for Fabi, who was a pawn up against Karjakin in the final game of the day, but the Russian saved the draw with great defensive technique. In the post-game interview with Maurice Ashley, Caruana said that he had been feeling seriously sick on Thursday night, but that somehow he got better in the morning.

Vachier-Lagrave sneaks back into contention


Local hero Maxime Vachier-Lagrave won two games to get back to 50% and claim real chances of finishing first if he does well in the blitz portion of the event. His win over Levon Aronian was the last game to finish on Friday — MVL pushed in an endgame that seemed to be heading to a draw. Earlier, he had defeated Shakhriyar Mamedyarov in a sharper battle. White was an exchange up and had a decisive advantage when he played 31.f5:

Black can't take the rook due to 32.Qg5+, winning both the bishop and the c8-rook with checks. Shak saved his bishop with 31...Bf7, but gave up trying two moves later. Mamedyarov bounced back with a win over Grischuk, but is anyway sharing last place on 7/18. 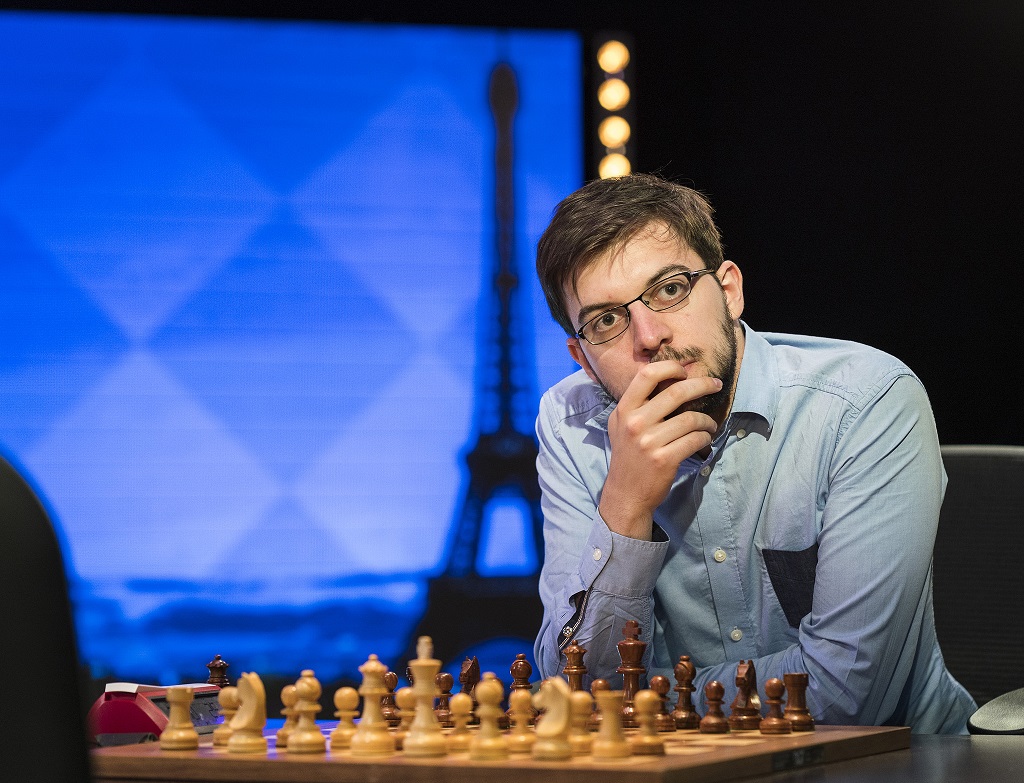 Hikaru Nakamura has shown strong and stable chess so far in Paris. He pressed for a win until the very end against Caruana on Thursday and achieved his second victory of the event over Viswanathan Anand the next day. However, things could have gone very differently had Vishy found a strong resource in a complex endgame:

Black has the queen for a rook and a bishop, but the pawn structure is almost completely closed. Nakamura has just played 45...Nb6 and Vishy answered with 46.Nxe5. The computers show that advancing the passed d-pawn and caging the queen from the defence would have been almost decisive: 46.d6 Qg1 47.Rf2 Qb1 48.d7, and Black needs to give up his knight.

Anand's continuation let the queen back into the game, and Nakamura did not take long to use it effectively against the white king. Resignation came on move 57. 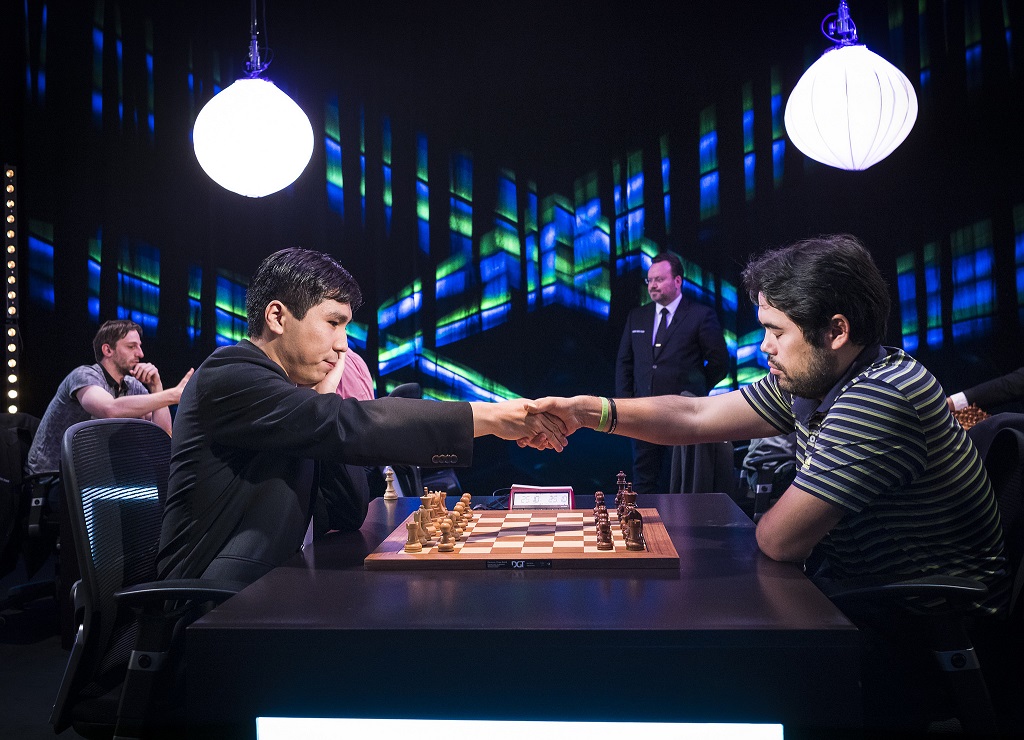 Wesley So's great performances in Leuven and Paris have propelled him to the second place of the rapid live ratings list, but no less than six of his rivals in Paris are still above him in the blitz ratings list. Nakamura, Karjakin and Vachier-Lagrave are numbers 2, 3 and 4, respectively, and will try to show their skills this weekend. Despite their subpar third day of rapid, Aronian and Anand are still three points behind on 50%. 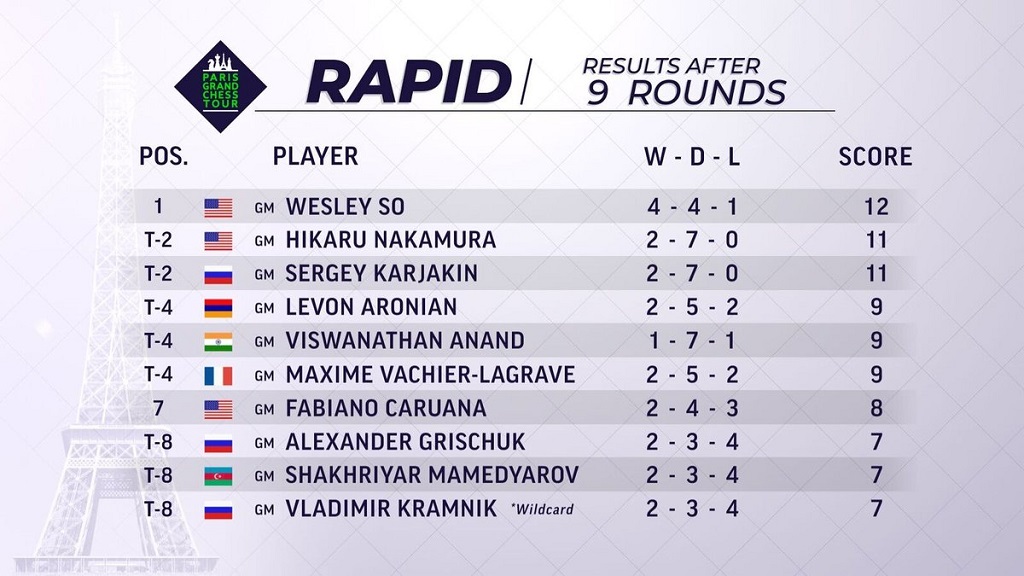 Tomorrow, the first round of blitz starts at 14:00 CEST. As always, you can follow it live with commentary and computer analysis here on chess24!

If you missed it, you can also replay the action with live commentary from Yasser Seirawan, Jovanka Houska and Alejandro Ramirez: