Hikaru Nakamura reigned supreme for eight and a half rounds of the blitz segment of the Paris Grand Chess Tour. A win over Magnus Carlsen in the final game would have given him an almost insurmountable 2.5-point lead going into the last day, but just when that seemed a distinct possibility the World Champion pulled off an unlikely win to close to within half a point. Jan Gustafsson analyses that crucial game, while we take a look at some of the day’s most memorable blunders. 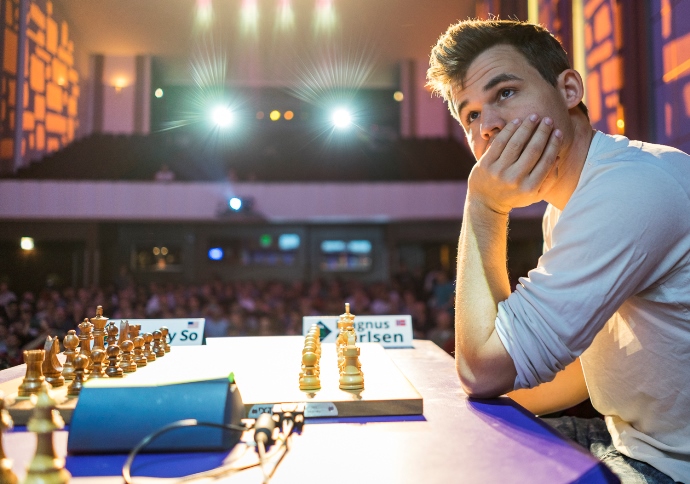 Carlsen was the first player to beat Nakamura in the 2016 Grand Chess Tour - his mission is to win in Paris and Leuven and give himself a chance of winning the whole series despite not playing in St. Louis and London | photo: Lennart Ootes

Saturday was the definition of a two-horse race. Until their final round clash both Nakamura and Carlsen were unbeaten, with only their score from lost positions against Veselin Topalov dividing them. Magnus drew, while Hikaru won in an extraordinary fashion (of which more later) so that Hikaru increased the lead he had at the start of play from 1 to 1.5 points:

The other players who might have made a move failed to dazzle, with MVL and Kramnik scoring 50%, while So’s stealthy progress came to a grinding halt with six draws and three losses, including defeats in his two final games to Nakamura and Kramnik. The best performer outside the top two was actually Fabiano Caruana (5.5/9), who proved that he can, after all, move the chess pieces quickly and well, with a 4-game winning streak at the end. That was a great run, but Caruana is of course out of contention for the top prizes after his woeful rapid performance. 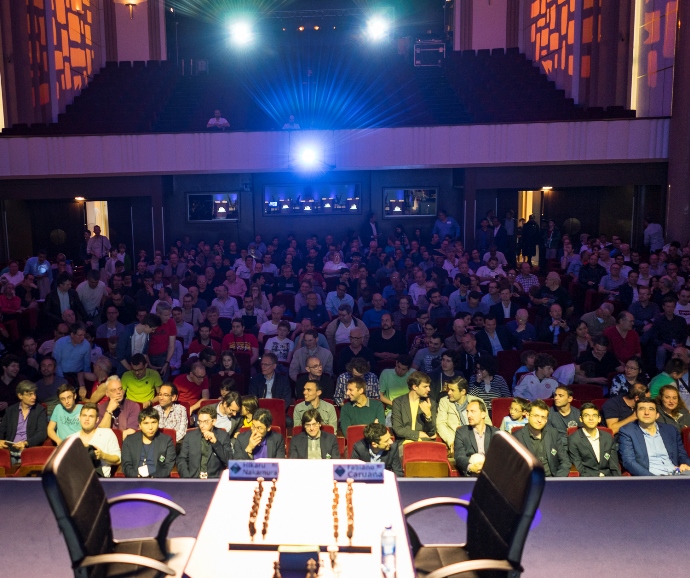 So it all came down to one game, and that was the focus of Grandmaster Jan Gustafsson’s analysis, after he first took a look at how Topalov gifted Nakamura a win with a schoolboy error:

Rather than try and chronicle the rest of the day’s action in any comprehensive fashion, let’s take a look at the element of chess that best unites players of all levels – blunders! There were plenty to choose from, so apologies if your favourites didn’t make the following seven…

1. Topalov’s pawn is a pawn 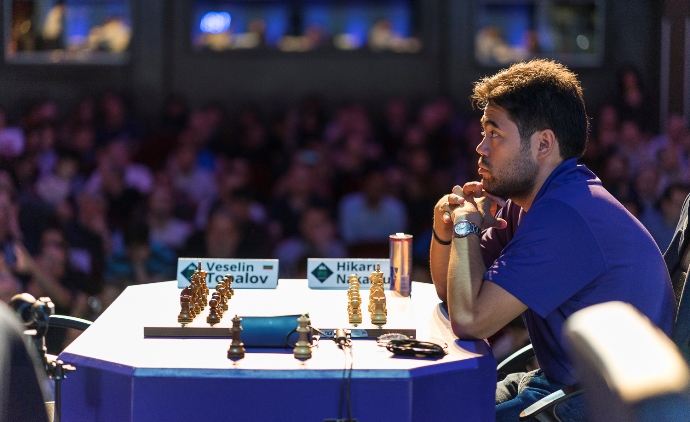 In St. Louis Nakamura forgave Kasparov an obvious illegal move, but in Paris he was taking no prisoners | photo: Lennart Ootes

Jan already looked at this moment in his video, but no list of the day’s blunders can be allowed to pass without mentioning it.

When Veselin moved his pawn to e1 in this position he simply left it there and pushed his clock. Back in the 19th century the first World Champion Wilhelm Steinitz had approved of that option, but in Veselin’s case it was more a case of wanting to spare himself some unnecessary hassle. Nakamura’s only legal move would be to capture a new rook or queen, and against many opponents the moment might have passed unnoticed in a blur of hand movements. 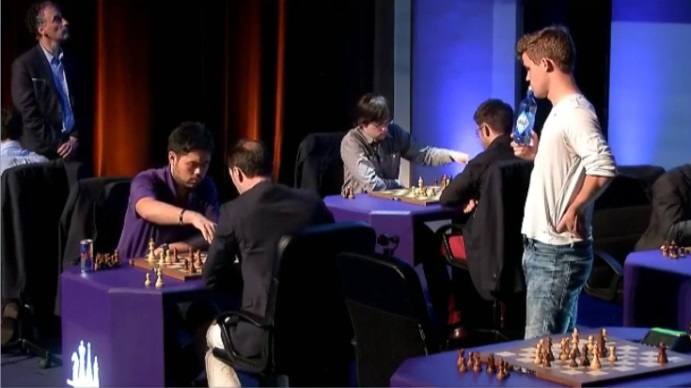 Magnus may have had to resist the temptation to hit Topalov over the head with his water bottle by the end of the game...

Hikaru was well within his rights to claim the instant forfeit win - by far his best chance for a happy outcome to the game. You can rewatch the moment below.

Spare a thought for Big Vlad, who must have assumed he would win “blunder of the day” for the following effort in the first round of blitz against Anish Giri:

The question had only seemed to be whether Kramnik could convert his extra pawn, and now after 32…Rf4? he even has the crushing 33.Be5!, though any reasonable move would do. Instead there followed 33.Rg8+?? Bxg8. The curse of forgetting a long backwards move by a piece strikes again.

Two rounds later and Giri was again the beneficiary of a move so bad his opponent, Veselin Topalov, simply resigned after making it – 60…Re5+??

The joy of giving a check wouldn’t last long after 61.Kf4, when Rb8 and mate is just one of the threats that ensure massive material losses. 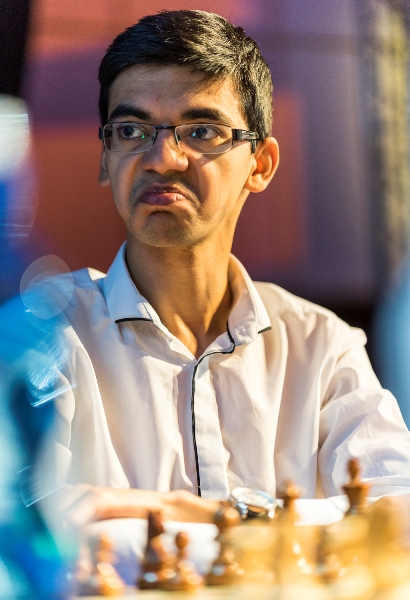 What to make of it all? | photo: Lennart Ootes

To avoid the impression that all the blunders went in Giri's favour we should add his own contribution. Nakamura is a dangerous enough attacking opponent when you don’t help him out by opening up a path to your king with a move like 38.d5??

Anish summed up the day’s entertainment:

It’s very likely Hikaru would have converted his knight ending against Laurent Fressinet into a win, but the Frenchman found an elegant way to make sure: 50.Ne8+??

Once again that theme of making a losing move with check. Like Topalov, Fressinet resigned before letting his opponent play 50…Ke7, when the knight’s days are over. 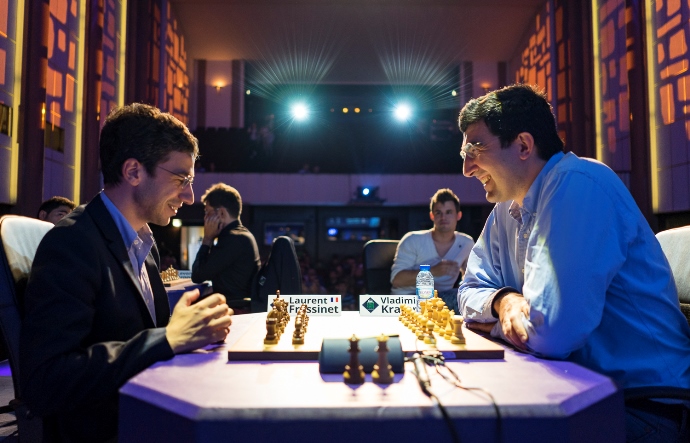 This game illustrated the dangers of sharing a joke with Kramnik before you play | photo: Lennart Ootes

Fressinet is again the star of this effort.

7. A blunder ends the daily grind

Magnus Carlsen was aiming to grind out another endgame win against Vladimir Kramnik when he was eagle-eyed enough to spot that Vlad's 55.Be3? loses on the spot:

55…Rc3! not only hit e3 but set up the threat of Rxf3+ and capturing on e4. Kramnik decided to resign rather than struggle on an exchange down against the World Champion. 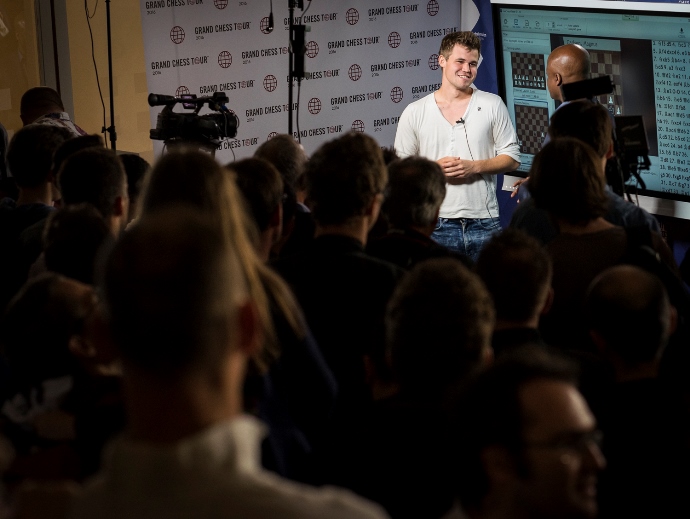 By the end of the day Carlsen had every reason to smile | photo: Lennart Ootes

So with one day – and nine more blitz games – to go, Hikaru Nakamura still leads, but Magnus Carlsen is only half a point back and will have White when they meet in the final round of the tournament. 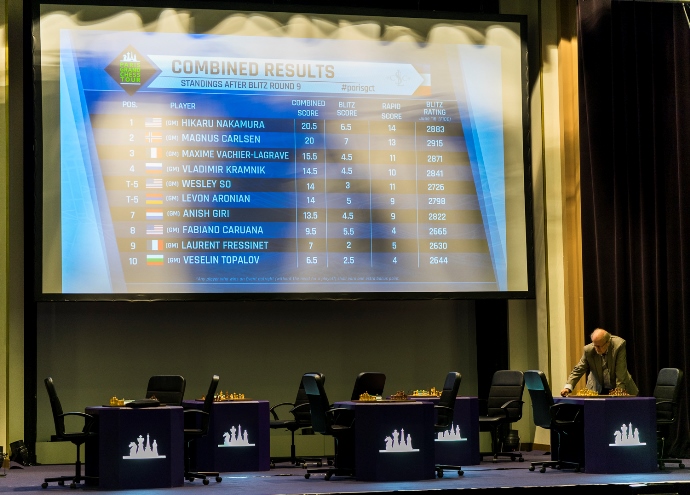 When the dust had settled the table (and tables) looked as follows | photo: Lennart Ootes

Don’t miss live commentary by the dream team of Peter Svidler and Jan Gustafsson from 14:00 CEST on Sunday. You can replay their Day 3 commentary below:

You can also follow the games using our free mobile apps: